In the midst of a seesaw political battle to save Yasuni National Park from oil developers, scientists have announced that this park in Ecuador houses more species than anywhere else in South America—and maybe the world.

“Yasuní is at the center of a small zone where South America’s amphibians, birds, mammals, and vascular plants all reach maximum diversity,” Dr. Clinton Jenkins of the University of Maryland said in a press release. “We dubbed this area the ‘quadruple richness center.'”

An explosion of life

The number of species inhabiting Yasuni is staggering. According to the study, published in PLoS ONE the region breaks records for numerous taxa, including amphibians, trees, bats, and insects.

More trees grow in a single hectare (2.47 acres) of upland rainforest in Yasuni—655 species—than in the continental US and Canada combined. In 25 hectares, the number of tree species rises to 1,100.

“In just one hectare in Yasuní, there are more tree, shrub, and liana (woody vines) species than anywhere else in the world,” said Gorky Villa, an Ecuadorian botanist working with both the Smithsonian Institution and the conservation organization with offices in Maryland and Quito, Ecuador, Finding Species.

The same incredibly high diversity applies to amphibians, according to Shawn McCracken of Texas State University.

“The 150 amphibian species documented to date throughout Yasuní is a world record for an area of this size. There are more species of frogs and toads within Yasuní than are native to the United States and Canada combined.”

However the numbers of insects in Yasuni may eclipse all of these: according to entomologist, Dr. Terry Erwin, a single hectare of rainforest may contain as many as 100,000 unique insect species. This estimate is the highest per unit area in the world for any taxa, plant or animal.

“One of our most important findings about Yasuní is that small areas of forest harbor extremely high numbers of animals and plants,” said lead author Margot Bass, President of Finding Species. “Yasuní is probably unmatched by any other park in the world for total numbers of species.”

In one of the park’s well-studied areas, Tiputini Biodiversity Station, researchers have cataloged 247 amphibian and reptiles, 550 birds, and 200 mammals—over a hundred of which are bats. The station consists of only 6.5 square kilometers (1,600 acres).

“The station is the richest site in the world for bats,” asserts researcher Dr. Thomas Kunz of Boston University

Twenty-eight vertebrates inhabiting Yasuni are currently threatened with extinction according to the IUCN Red List, including the white-bellied spider monkey, Poeppig’s woolly monkey, the giant river otter, and the Amazonian manatee. Few plants and invertebrates, such as insects, have been evaluated by the IUCN.

“What makes Yasuní especially important is its potential to sustain this extraordinary biodiversity in the long term,” said Dr. Matt Finer of Save America’s Forests. “For example, the Yasuní region is predicted to maintain wet, rainforest conditions as climate change-induced drought intensifies in the eastern Amazon.”

Troubled plan to save Yasuni from oil

To protect this vast web of biodiversity, as well as indigenous tribes in Yasuni, the Ecuadorian government has come up with an innovative and ambitious plan called Yasuni-ITT. The plan calls for industrialized nations to pay Ecuador $3 billion over ten years to keep the oil in the ground, thereby preventing massive carbon emissions due to deforestation and the burning of the oil. However this plan has encountered its share of difficulties.

After two years, the proposal still has no confirmed donors. So far, Spain, Germany, Belgium, France, and Sweden have all shown interest in the idea, but have yet to put forth any cash.

The slow response of industrialized countries has frustrated Ecuador’s President, Rafael Correa; while demands from possible donors—such as having a say in how the money is spent and requiring additional land to be protected—has left Correa irate. Last week he called any such stipulations “unacceptable”.

“If they don’t accept our conditions, they can keep their money and we’ll drill,” Correa said according to The New York Times.

Following his statement, Correa’s Minister of Foreign Affairs, Fander Falconi, resigned along with three other advisers.

However, this week Correa has toned down his criticism, saying that “The Yasuni-ITT initiative will continue and we will double our efforts to make it a success,” according to The Wall Street Journal.

The authors of the new paper say that Yasuni-ITT is the best chance to save the startling biodiversity of Yasuni National Park. They call for a moratorium on all oil exploration, concluding that oil cannot be extracted from the park without irreversible damage to the ecosystem and its priceless biodiversity.

“If the Yasuní-ITT Initiative does not succeed, the tragic reality will be drilling for oil in the core of the most biodiverse rainforest on Earth,” says Matt Finer. 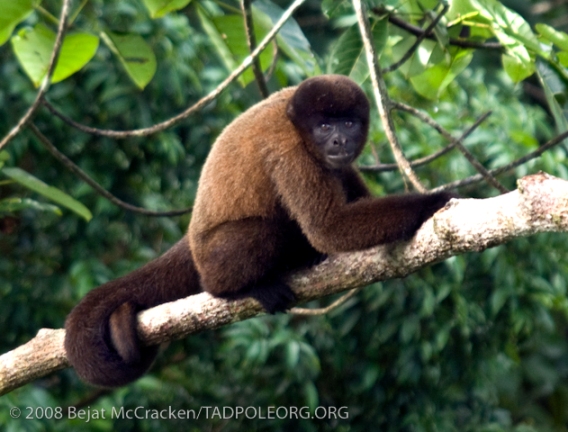 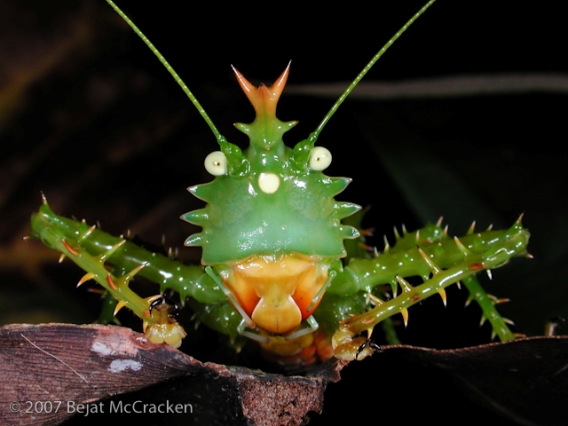 Crowned like a king, the spike-headed katydid, Panacanthus cuspidatus, is remarkably spiny. Found in the Ecuadorian Amazon rain forest while hiking at night. Photo by: Bejat McCracken – www.bejat.com 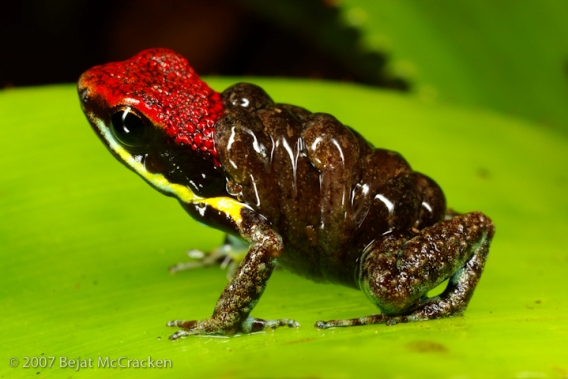 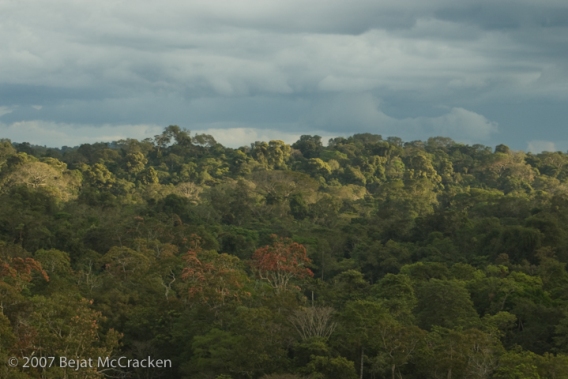 Ecuador to be paid to leave oil in the ground

(12/23/2009) Ecuador will establish a trust fund for receiving payments to leave oil reserves unexploited in Yasuni National Park, one of the world’s most biodiverse rainforest reserves, reports the UN Development Programme, the agency that will administer the fund.

(12/14/2009) As climate change negotiations continue full force in the Danish city of Copenhagen, Latin American countries are hoping the Global North will commit to its “climate debt” by reducing greenhouse gas emissions and providing resources to poor nations. It’s certainly an understandable aspiration: Latin America only produces five per cent of global emissions of carbon dioxide, a chief greenhouse gas, yet the region has borne the brunt of extreme weather ranging from droughts to flooding.

Will Ecuador’s plan to raise money for not drilling oil in the Amazon succeed?

(10/27/2009) Ecuador’s Yasuni National Park is full of wealth: it is one of the richest places on earth in terms of biodiversity; it is home to the indigenous Waorani people, as well as several uncontacted tribes; and the park’s forest and soil provides a massive carbon sink. However, Yasuni National Park also sits on wealth of a different kind: one billion barrels of oil remain locked under the pristine rainforest.

(09/03/2009) The promotional efforts ahead of the upcoming release of the film Crude have helped raise awareness of the plight of thousands of Ecuadorians who have suffered from environmental damages wrought by oil companies. But while Crude focuses on the relatively recent history of oil development in the Ecuadorean Amazon (specifically the fallout from Texaco’s operations during 1968-1992), conflict between oil companies and indigenous forest dwellers dates back to the 1940s.

(09/03/2009) Germany has apparently agreed to fund a significant portion of Ecuador’s scheme to leave Amazon rainforest oil reserves in the ground, according to Business Green.

(02/27/2009) A ruptured oil pipeline caused 14,000 barrels of crude to spill into a river in the Napo region in northeast Ecuador, an area known for its high biological diversity, reports Reuters.

(02/19/2009) Economic development could doom the Amazon warns a comprehensive new report from the United Nations Environment Programme (UNEP). The report — titled GEO Amazonia [PDF-21.3MB] — is largely a synthesis of previously published research, drawing upon studies by more than 150 experts in the eight countries that share the Amazon.

Payments for eco services could save the Amazon

(02/12/2009) Paying for the ecological services provided by the Amazon rainforest could be the key to saving it, reports a new analysis from WWF. The study, Keeping the Amazon forests standing: a matter of values, tallied the economic value of various ecosystem services afforded by Earth’s largest rainforest. It found that standing forest is worth, at minimum, $426 per hectare per year.

(10/09/2008) Ecuador’s proposal to protect one of the world’s most biodiverse rainforests from oil development has failed to secure any funding ahead at its December deadline, reports the Guardian Unlimited.

Oil development could destroy the most biodiverse part of the Amazon

(08/12/2008) 688,000 square kilometers (170 million acres) of the western Amazon is under concession for oil and gas development, according to a new study published in the August 13 edition of the open-access journal PLoS ONE. The results suggest the region, which is considered by scientists to be the most biodiverse on the planet and is home to some of the world’s last uncontacted indigenous groups, is at great risk of environmental degradation.

(12/18/2007) Tropical deforestation is increasingly enterprise-driven rather than the result of subsistence agriculture, a trend that has critical implications for the future of the world’s forests, says Dr. Thomas Rudel, a researcher from Rutgers University. As urbanization and government-sponsored development programs dwindle in the tropics, industrial logging and conversion for large-scale agriculture — including oil palm plantations, soy farms, and cattle ranches — are ever more important causes of forest destruction.

Ecuador: pay us not to develop Amazon oil reserves

(04/27/2007) Ecuador says it will wait a year to see whether the international community takes its offer to forsake development of a giant oil field in the Amazon rainforest in exchange for compensation, reports the Environmental News Service.

(05/23/2006) Last week Ecuador seized Amazon oilfields controlled by Occidental, an American oil firm which produces about 20 percent of the country’s oil output and has invested about $1 billion since 1999. The decision will bring a short-term boost in government revenue while appealing to street protestors who have caused havoc for the country’s politicians over the past few years. However, looking the beyond the politics, the seizure could have implications for the environment of the country which is home to some of the world’s most biodiverse ecosystems.