Will shipping noise nudge Africa’s only penguin toward extinction?

CAPE TOWN — Seabird ranger Eduard Drost was busy with a routine inspection in an African penguin colony off the South African coast in 2021 when he noticed a troubling number of sickly birds.

“Some were emaciated, especially the chicks,” he recalls. “Their chest and hip bones were sticking out. Their bellies were flat, not rounded.”

It looked as though they weren’t feeding well, and his colleagues at the nonprofit Southern African Foundation for the Conservation of Coastal Birds (SANCCOB), which helps monitor the colony, on Bird Island, agreed. As soon as a weather window opened, South African National Parks, a government agency, sent in a helicopter to airlift 95 starving chicks for hand rearing at a rehabilitation center on the mainland, 60 kilometers (37 miles) away in the port city of Gqeberha.

This rescue is a red flag for marine conservationists. The African penguin (Spheniscus demersus) is expected to go extinct in the wild in just over a decade, given its current population decline. The main reason is a lack of food — sardines, mostly — caused by disruptions to ocean conditions from global heating and competition from the commercial fishing industry.

Another colony in the same bay, on St. Croix Island, just 43 km (27 mi) away, has seen one of the most devastating population crashes in recent years. Annual head counts show that St. Croix’s penguin numbers dropped by 85% in five years, between 2016 and 2021.

Scientists have identified a possible additional cause, one that is an entirely new threat and that further inhibits the penguins from finding food: noise pollution from marine vessels in a bay that has become one of the noisiest shipping hubs on the planet.

These two colonies, in the busy port area of Algoa Bay, are the eastern-most breeding sites for the species. If the collapse occurring here were to affect the entire African penguin population, conservationists say it would bring about the D-Day for functional extinction much sooner than 2035.

Home of the ‘jackass’

The African penguin is the only penguin species indigenous to the continent. Historically it occupied a relatively short coastal stretch from Namibia down to the south-western coastline of South Africa, ending here at Algoa Bay.

Once called the “jackass” penguin because its honking call sounds like a donkey’s braying, the bird is now endangered. South Africa’s breeding colonies have crashed by 73% in the past three decades, dropping from about 42,500 breeding pairs in 1991 to just 10,400 in 2021.

Threats compounding the disruptions to the birds’ food supply are oil spills, lost habitat and breeding sites, and diseases like avian flu.

Drowned out by noise?

Algoa Bay has two regionally significant industrial harbors that make it a busy route for marine traffic. Since 2016, a new shipping practice has started here that makes it an even more attractive pit stop for passing vessels. The bay now offers ship-to-ship refueling for vessels anchored offshore, known as ship-to-ship bunkering, which saves in-port docking time.

Since the start of this practice, marine traffic in the bay has doubled, according to penguin researchers and conservationists who monitor the population there. Notably, while both Bird Island and St. Croix Island have to cope with possible disturbances from passing traffic, the bunkering ships anchor close to St. Croix, exposing the birds there to far greater levels of shipping activity and noise. 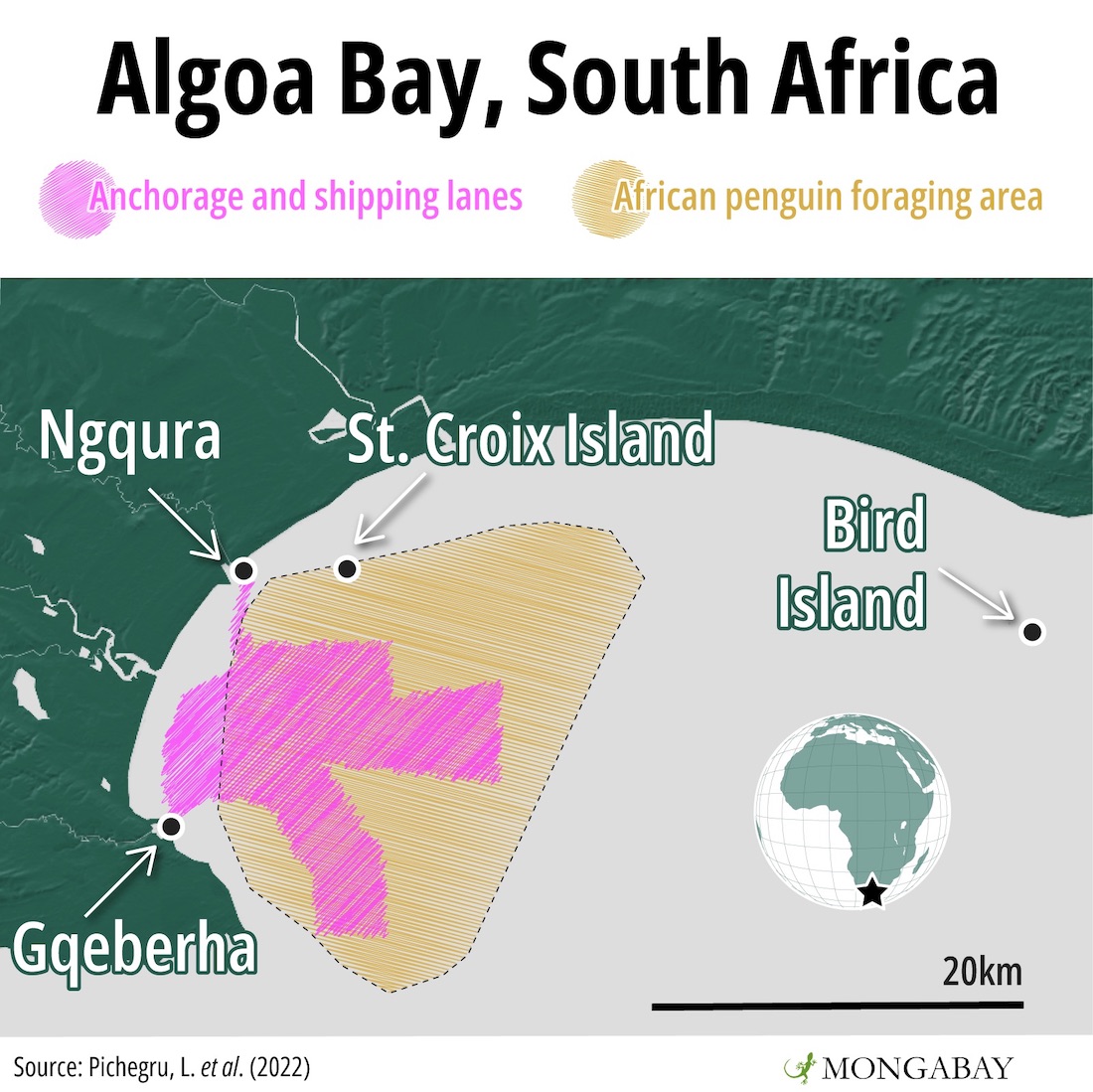 “The number of bulk carriers pulling into the bay has increased tenfold,” says Lorien Pichegru, a marine biologist with the Coastal and Marine Research Institute at Nelson Mandela University in Gqeberha.

These large vessels have the biggest engines and emit the highest noise levels of the ships entering the bay.

“Since 2016, underwater noise levels have doubled,” Pichegru says. “Algoa Bay is now one of the noisiest in the world.”

Pichegru and her research partners found a direct correlation between the collapse of the St. Croix penguin colony and the increase in shipping traffic since offshore bunkering started in 2016.

These findings, published recently in the journal Science of the Total Environment, are the first results from an ongoing investigation into the possible impacts of human-caused underwater noise on this near-extinct bird, and they represent a global first.

Most of the research into the fallout of marine noise pollution has been done in relation to ocean-dwelling mammals, such as whales and dolphins, says Alistair McInnes, seabird conservation program manager with the nonprofit conservation group BirdLife South Africa and a co-author of the study.

“It’s the first time research has shown a direct correlation between underwater noise pollution and the collapse of a seabird species,” McInnes says. 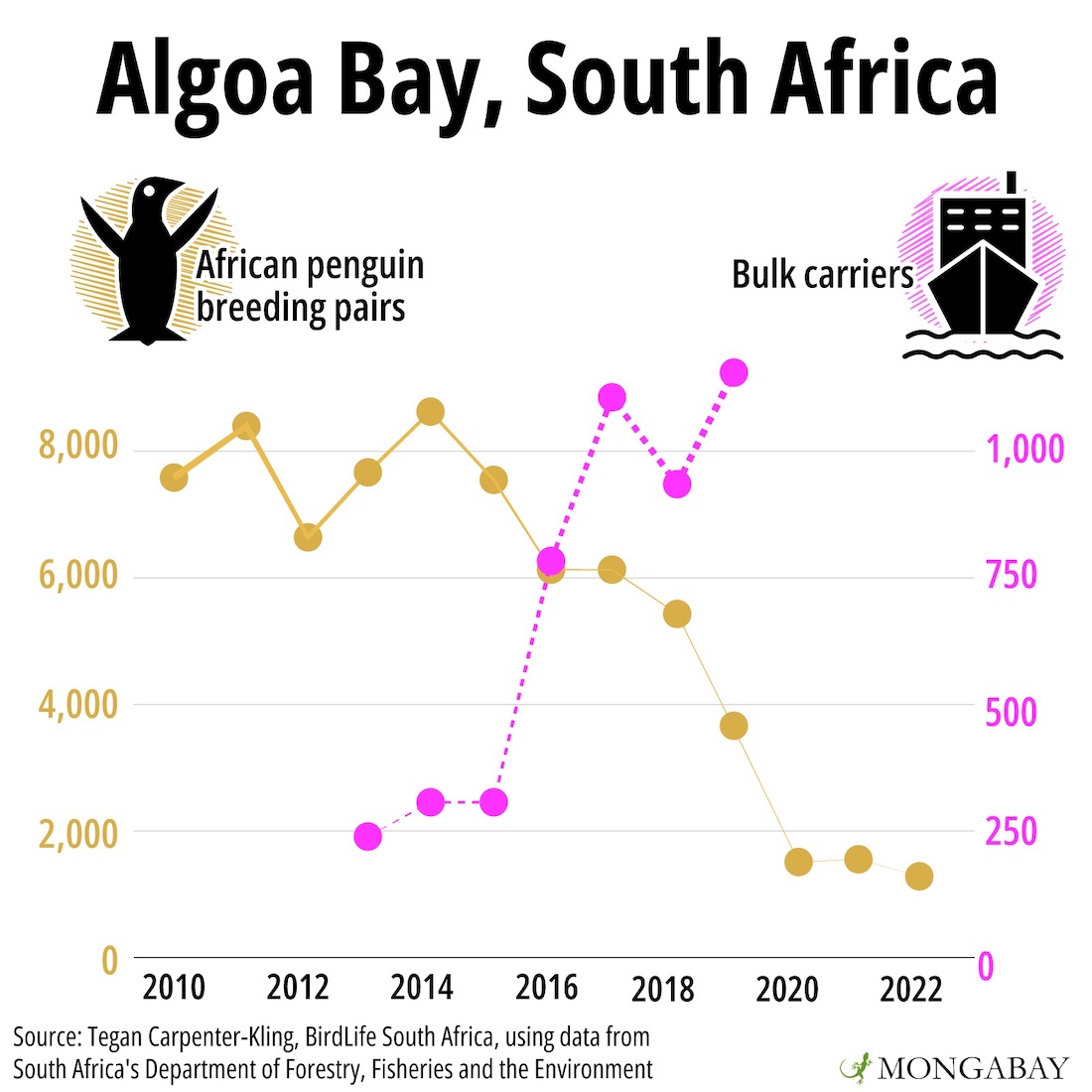 But does correlation between shipping noise and population decline mean it’s the cause? That’s the next question the investigation aims to answer.

African penguins are known to hunt more effectively when they forage in groups. They’ve also been shown to call to each other while they’re at sea, particular when moving in groups.

Researchers now need to answer two important questions: Does this underwater group chatter improve the penguins’ likelihood of hunting success; and if so, is shipping noise drowning out their calls and interfering with their feeding?

Another knock-on effect is that shipping noise could mask the sound of approaching predators, such as orcas, leaving penguins more vulnerable to becoming prey.

“We’ve attached underwater microphones and accelerometers to some of the birds to see how they respond to underwater noise,” McInnes says.

The ongoing population crash in the bay, mostly due to hunger, creates a Catch-22 situation, according to Pichegru.

“We know that working together increases the penguins’ chance of catching prey. But a population decrease reduces their chance of having enough numbers to forage successfully, which contributes to a further decrease in their numbers,” she says.

This will allow researchers to determine whether sound disturbance is a direct cause of the penguins’ ongoing difficulties in finding sufficient food. They say they hope to have clear findings by next year.

Adult birds spend about three weeks on land without eating while they shed old plumage and wait for the new feathers to waterproof. Before doing so, they need to have eaten enough not only to sustain themselves through the molt, but also to get back in the water afterward and swim the distances required to feed again.

During egg incubation and chick rearing, parents must be able to find fish within 29 km (18 mi) of the colony so they can return daily to tend their eggs or feed their chicks.

Where to from here?

“From an international perspective, these findings show the need for marine protected areas to consider the impact of noise pollution on species, especially where they are close to harbors with increased marine traffic,” Pichegru says.

Conservationists are considering proposing various global best-practice approaches to offset some of the impacts of noise pollution, such as policies that reduce ships’ speed in sensitive areas and limit the number and size of vessels allowed into a bay of this kind. Transnet, the South African ports authority responsible for overseeing shipping in the harbor, has expressed an interest in finding solutions.

“We also need more scientific monitoring of noise, before these measures are put in place and afterwards, so that we have a proper understanding of what works,” Pichegru says.

When the Bird Island chicks arrived at the SANCCOB rescue center in 2021, some weighed half what they should have for their age.

After three months of hand-feeding, though, most were healthy enough to be released back into the colony. They were expected to head out to sea soon after that, where they will spend two or three years maturing before returning to the island to breed.

Each animal has a microchip embedded under its skin. When they return, these tags will register on a reading device installed near the colony that tracks the comings and goings of all tagged birds.

This will allow conservationists to keep a close eye on the population’s overall numbers.

Banner image: A video still shot by a “crittercam” strapped to a penguin’s back shows penguins chasing down a bait ball. Conservationists want to establish whether increased shipping noise is interfering with the birds’ group foraging efforts. Image by Tegan Carpenter-Kling, BirdLife South Africa.