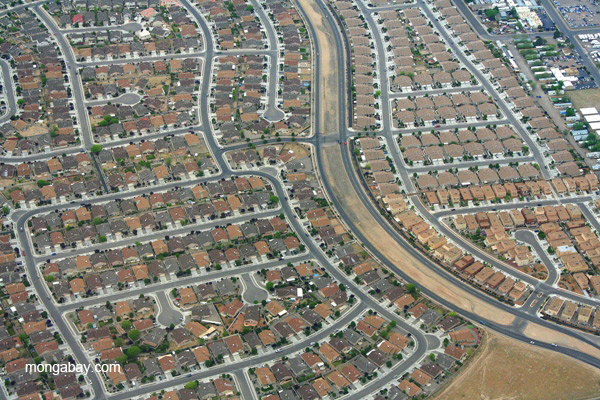 Suburban sprawl in Albuquerque, New Mexico. The average American’s ecological footprint is the fifth highest in the world. Photo by: Jeremy Hance.

Human society is consuming natural resources as if there were one-and-a-half Earths, and not just a single blue planet, according to the most recent Living Planet Report released today. If governments and societies continue with ‘business-as-usual’ practices, we could be consuming three years of natural resources in 12 months by 2050. Already, this ecological debt is decimating wildlife populations worldwide, disproportionately hurting the world’s poor and most vulnerable, threatening imperative resources like food and water, heating up the atmosphere, and risking global well-being.

“Clearly, the current system of human development, based on increased consumption and a reliance on fossil fuels, combined with a growing human population and poor overall management and governance of natural resources, is unsustainable,” the report reads.

Compiled by the World Wide Fund for Nature (WWF), the Zoological Society of London (ZSL), and the Global Footprint Network, the Living Planet Report is a biannual look at how humans consume the world’s natural resources.

This year’s report—even bleaker than the last—comes just months before the UN Summit on Sustainable Development in Brazil. Known as Rio+20, the summit is marking twenty years since the landmark Rio Summit in 1992.

“Since the original Earth Summit, we’ve taken some steps forward, but the pace is glacial. So Rio+20 needs to elevate the urgency of action on the scale needed: now is our chance to reflect whether the future we’re creating for our planet is the legacy we want to leave for future generations,” David Nussbaum, head of WWF-UK, said in a press release.

The seven billion people on Earth are currently overshooting planet’s renewable resources by 50 percent—including agriculture, fish, forest, grazing land, developed land, and carbon—according to report. This means it now takes 18 months for nature to reproduce the resources used in 12 months.

“Renewable resources can be harvested faster than they can be re-grown. But just like overdrawing from a bank account, eventually the resource
will be depleted,” explains the report. “At present, people are often able to shift their sourcing when this happens; however at current consumption rates, these sources will eventually run out of resources too—and some ecosystems will collapse even before the resource is completely gone.”

Ecosystems are under tremendous pressure, especially in the tropics, according to the report’s outlook on biodiversity. Since 1970, the benchmark year for the Living Planet Report, biodiversity has declined by 28 percent worldwide. Tracking 2,688 vertebrate species around the world, researchers have detailed a sharp decline in tropical regions (61 percent) between 1970 and 2008. Freshwater species in the tropics are the worst off of all, declining by 70 percent [click here for more on tropical wildlife loss].

Still, wildlife populations in temperate regions are actually on the rise: 31 percent since 1970. While the most uplifting portion of the report, this data largely reflects the recovery of many species in the region after centuries of decline and overexploitation. Still, it gives hope that tropical species could bounce back if given a chance.

The report, which examines freshwater separately from other resources, finds that between 1996 and 2005, the global water footprint was 9 trillion meters cubed annually. Ninety-two percent of the world’s water consumption was for agriculture, and nearly 40 percent of the global population faces severe water scarcity for at least month every year.

“The ecological crisis is becoming a driver for our growing economic pain,” said Mathis Wackernagel, President of Global Footprint Network, in a press release. “Using ever more nature, while having less is a dangerous strategy, yet most countries continue to pursue this path. Until countries begin tracking and managing their biocapacity deficits, they not only put the planet at risk, but more importantly, themselves.”

Of course, some nations consume far more resources than others. In fact, if everyone consumed as much as the average American, four Earths would be required. But if consumption levels worldwide were those of Indonesians, two-thirds of the planet would be used. The U.S. is number five in the list of the nations with the biggest ecological footprints, outstripped only by Qatar, Kuwait, the United Arab Emirates, and Denmark. The top nations are rounded out by Belgium, Australia, Canada, the Netherlands, and Ireland.

The bottom ten bottom include Nepal, Bangladesh, and Pakistan, along with a number of nations racked by conflict or ecological collapse, including Haiti, the Democratic Republic of the Congo, Afghanistan and the Occupied Palestinian territory. Experts have stated that in order for sustainability to be achieved, nations on the very bottom would need to consume more per person, while those on the top would need to consume considerably less, which can likely be achieved through better resource management, existing green technologies, greater efficiency and less waste, as well as cultural change.

For many the problems are a moral one, as “the risks [of environmental scarcity and degradation] are disproportionately borne by the poorest people, even though they contribute relatively least to humanity’s Ecological Footprint.”

Road to Rio or ruin

The report makes dozens of recommendations for governments and societies, making a point to target Rio+ participants with a summary document of the 85- page full report.

To fight rising greenhouse gas emissions—one of the major differences between nations with massive ecological footprints and those near the bottom—the report says 40 percent of global energy should be met with renewable sources by 2030, and 100 percent by 2050. In that same vein, the report says fossil fuel subsidies must be cut.

“Could renewable energy leapfrog fossil fuels in developing nations, in the same way that mobile phones leapfrogged landlines?” the report asks, arguing that renewable energy expansion in the developing world would not only slow rising greenhouse gas emissions, but also protect forests which are currently destroyed for wood and charcoal to burn.

Meanwhile, governments should begin measuring “success” by more factors than the current obsession with GDP, while the market must begin putting an economic value on nature. In order to combat overpopulation, both women and men must be given access to contraception, and women specifically need more educational opportunities.

Before it has even begun, Rio+20 has already come under criticism for signs that governments are once again ignoring warnings from scientists and steering towards paying lip service, but little more, to the combined crises of global climate change, biodiversity loss, resource scarcity and poverty.

“We need to see real leadership from the governments of the world coming together to commit themselves to step up to this challenge,” director general of WWF, Jim Leape said. “They can take some decisions in Rio that really would make a difference in terms of setting a new course for the global economy.” Our success in transforming commodity markets will determine nature’s fate

(04/01/2012) The success of governments and big corporations in eliminating environmental degradation from the products we consume will play a critical role in determining the fate of the world’s remaining wild places, said a group of experts speaking at a panel during the Skoll World Forum on Social Entrepreneurship.