The total area of Brazilian Amazon forest that has been degraded — through selective logging, understory fire, forest edges and fragmentation — is larger than the total deforested area, according to a recent study published in the journal Science.

Eraldo Matricardi of the University of Brasilia and David Skole of Michigan State University led an international team of researchers in analyzing 23-years of satellite data covering the entire Brazilian Amazon to map areas of deforestation and degradation. They analyzed the light spectra in each pixel of 1,200 Landsat satellite images, each representing a 30 meter (98 feet) square of forest, to determine the proportion of green vegetation and therefore the extent of degradation.

“The reflected light at any pixel is the combination of light from bare soil, photosynthetic vegetation and non-photosynthetic vegetation [such as] the stems and branches of trees,” explained Skole. Estimating the fraction of green vegetation in each pixel allowed the team to visualize forest degradation over a large scale. The team mapped degradation caused as a direct consequence of deforestation (such as edge effects and fragmentation) as well as indirect forest degradation (such as selective logging and understory fires) and complete land conversion for timber, pastures, cropland, or other human activities.

However, this deforestation decline has been offset by a trend of increasing forest degradation, and by 2014 the rate of degradation had overtaken deforestation — largely driven by an increase in logging and understory burning. During the 23-year study period, for example, the annual rate of selective logging increased by 270%.

Around 40% of forest degradation was caused by intensive logging and understory fires, while 60% resulted from edge effects and forest fragmentation. However, the growth of edges and fragments has decreased over time with decreases in deforestation rates and as isolated pockets of deforestation have merged, reducing the size of forest margins and swallowing forest fragments.

Forest degradation by fires and selective logging was persistent in the landscape over long periods of time rather than being replaced by other forms of degradation or complete deforestation. “The area affected by degradation is 10% of the total area of the Amazon, and contrary to common wisdom, a considerable part of this degradation did not lead to outright deforestation,” said Marcos Pedlowski of the Universidade Estadual do Norte Fluminense Darcy Ribeiro in Brazil, co-author on the study.

The data also revealed a major geographical shift in forest disturbance — selective logging is moving west, away from the historical “arc of deforestation” in the eastern Amazonian states of Pará, Mato Grosso, and Rondônia. This shift appears to be “unaffected by policy or regulation or mitigation and so it’s likely to only increase in significance,” said Skole.

Missing piece of the puzzle

International agreements and initiatives rely not only on monitoring for deforestation, but forest degradation as well. So the new study’s results could have major significance for the Convention on Biological Diversity’s Aichi Biodiversity Targets, the United Nations Convention on Climate Change’s Reducing Emissions from Deforestation and Forest Degradation (REDD+) carbon offsetting program, and the IUCN’s Bonn Challenge.

“Simply from a monitoring, reporting, and verification point of view, the Brazilian reporting requirements and commitments… with respect to REDD+ would mean that they’d have to start taking into account the degradation,” said Skole.

The findings could also have major implications for the counting of global greenhouse gas emissions and Brazilian national commitments to the Paris Climate Agreement. “The forests of the Brazilian Amazon store approximately 25% of the carbon contained aboveground in all of the world’s tropical forests, making their role in global carbon cycling and climate regulation unquestionably significant,” said Wayne Walker, Carbon Program Director at the Woodwell Climate Research Center (formerly Woods Hole Research Center in Maine, USA), who was not involved in the study.

“These results, which are broadly consistent with our own findings, provide further confirmation that the historical focus in Brazil on deforestation monitoring has resulted in a significant underestimation of forest carbon emissions,” Walker added. He believes that “protecting intact forests from degradation while encouraging the recovery of degraded forests, should be a fundamental component of any comprehensive national climate mitigation strategy.”

Pushing the Amazon closer to its tipping point

Forest degradation, as well as being a key driver of carbon emissions, has also been linked to changes in water and nutrient cycling that experts have warned could push the Amazon towards a rainforest-to-degraded-savanna ecological tipping point.

Forest degradation has also been connected to more frequent outbreaks of infectious diseases, resulting from increased contact between humans and displaced wildlife. For example, a study last year found that a 10% increase in deforestation in the Brazilian Amazon was linked to a 3.3% increase in malaria cases. “Everybody has known for a long time the influence of forest degradation and fragmentation on things like malaria,” said Skole.

In addition, increased contact between humans and wildlife can lead to the emergence of new infectious diseases, leading some experts to warn that the Amazon could be the source of the next global pandemic. 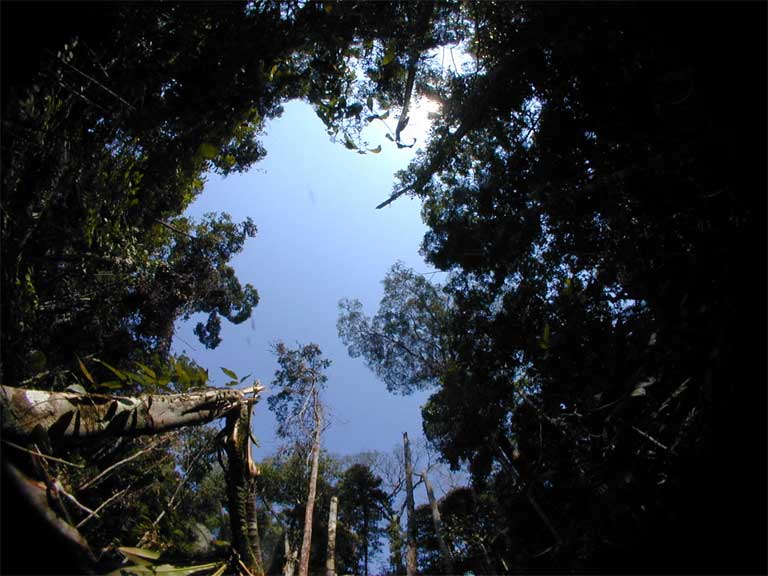 Despite the widespread and potentially dire impacts on the climate, biodiversity and public health, the degradation of Amazon forests has been historically neglected by politicians, activists, and even scientists, partly because it is far more difficult to detect than the wholesale clearing of forests. “Forest degradation is particularly challenging to estimate, and one can’t manage what one can’t measure,” said Walker.

“For a long time… even the science community wasn’t really looking at degradation hard enough… from a monitoring quantitative point of view,” agreed Skole. The new analysis provides a baseline for long-term monitoring of forest degradation that could inform Brazilian national policy and allow for the tracking of progress toward international climate and biodiversity targets.

However, Pedlowski warns that the current “hands off” approach of the Brazilian government under President Jair Bolsonaro has turned the Amazon into a “wild west,” which may lead to much more severe deforestation and degradation.

To avoid this potential ecological disaster, “the first step is to re-establish the command and control tools that were dismantled by the Bolsonaro government, and to stop the weakening of key agencies such as IBAMA [Brazil’s environmental protection agency], ICMBio [its national parks administrator] and INPE [its Indigenous affairs institution],” said Pedlowski.

Brazilian environmental agencies have been subjected to defunding and deregulation under the direction of newly instated, ex-military policy officers brought in by Environment Minister Ricardo Salles and others. “Without these agencies working properly… there is no chance of containing the advance of both deforestation and degradation in the Brazilian Amazon,” he added.

Pedlowski says that conserving the Amazon will require a shift in Brazil’s mindset, away from the view that protecting and restoring forests is an impediment to economic progress, when in fact the opposite is true. “When we burn a single meter of Amazonian forest, we are wasting an incredible amount of wealth,” he warned.

Banner image: Forests cleared by logging are clearly visible in satellite imagery, but vegetation loss at forest edges and below the canopy can extend hundreds of meters, or even farther, into the surrounding forest. Image by quapan on Visual Hunt / CC BY.