The dramatic photos of smoky fires sweeping through the Brazilian Amazon that garnered worldwide attention in August do not correspond to burning rainforest, but instead mostly correlate to land that was deforested earlier in 2019 and was then set ablaze in August to complete the land’s conversion for agricultural use, according to a report released today by the Monitoring of the Andean Amazon Project (MAAP). Mongabay had exclusive access to the report ahead of its release.

At least 125,000 hectares (310,000 acres) — the equivalent to 172,000 soccer fields — were cleared of forest earlier in 2019, and then burned in August, the report showed. The majority of the occurrences were observed in the northern state of Amazonas, which accounted alone for 39,100 hectares (96,618 acres), or about 30 percent of the total cleared-and-burned areas. Major deforested-and-burned lands were also detected in the northern states of Rondônia and Pará, where fire hotspots were also prominent in August.

The findings offer the first known base map linking 2019 deforestation and fire hotspots, and were presented with supporting evidence utilizing 16 high-resolution time lapse videos unveiling the process of forest clearing and overlapping fire occurrences in the northern Amazon region. 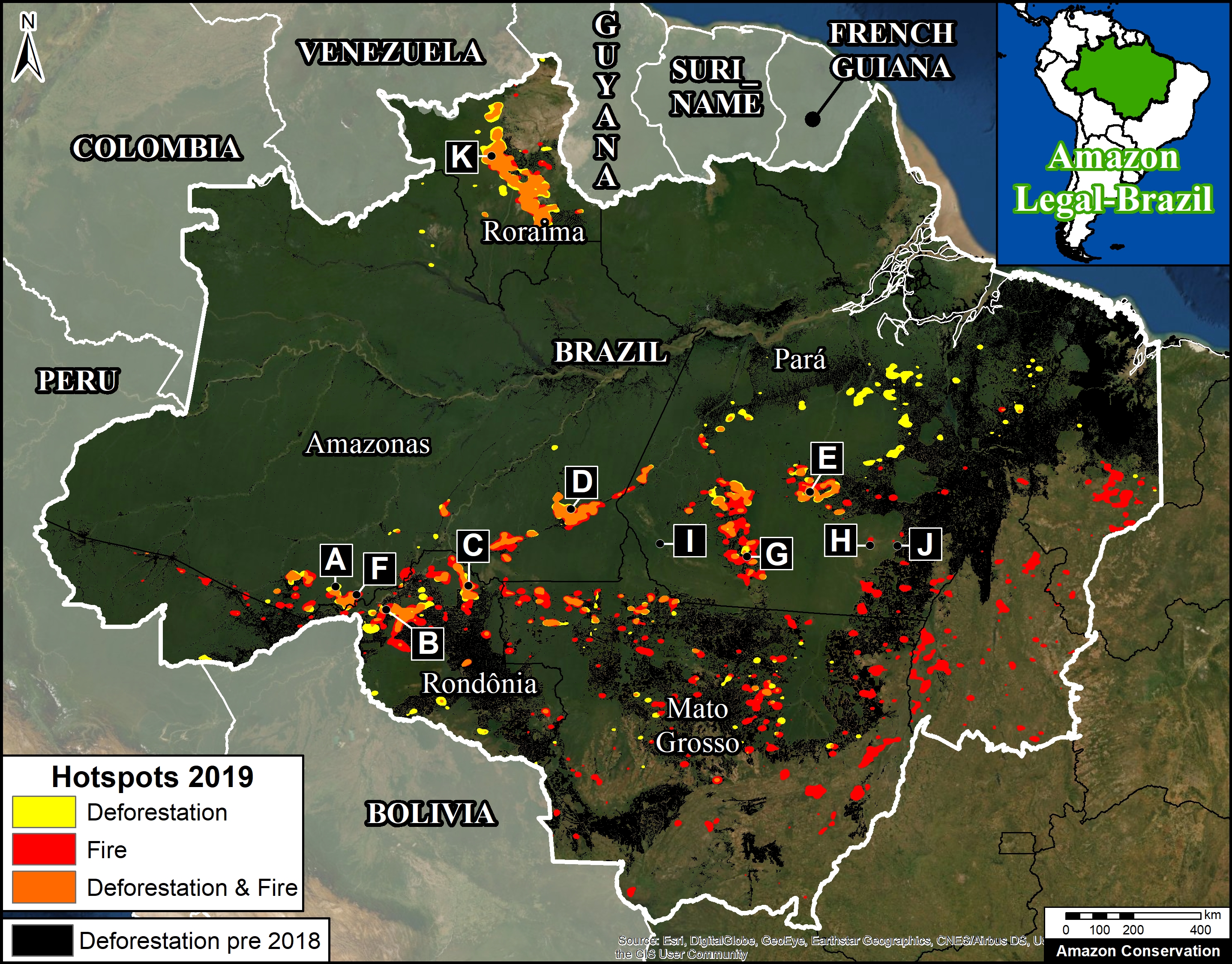 Base map showing overlapping 2019 deforestation and fire hotspots in Brazil. Orange areas show that at least 125,000 hectares (310,000 acres) — the equivalent to 172,000 soccer fields — were cleared through 2019 and then burned in August in the Brazilian Amazon. Source: MAAP

The base map included two key data layers: 2019 forest loss alerts from GLAD, the Global Land Analysis & Discovery lab at the University of Maryland, and 2019 fire alerts from NASA, revealing the critical overlap between deforestation and the blazes. MAAP researchers then zoomed in on select areas by analyzing high-resolution satellite imagery from Planet and the European Space Agency (Sentinel-2), and created striking time lapse videos using Planet’s website.

Time lapse video above shows deforestation followed by fire in the Brazilian state of Rondônia, in the Amazon region. Data: Planet, ESA.

Time lapse video above shows deforestation followed by fire in the Brazilian state of Pará, in the Amazon. Data: Planet, ESA.

“The major issue is deforestation… Now it makes sense why the fires were so smoky… It looks like a forest fire, it’s smoky as a forest fire [would be], but it’s burning recent deforested areas… The whole key was to look at the archive satellite imagery through 2019. We got much more information than a simple photo,” said Matt Finer, senior research specialist and director of MAAP, an initiative of Amazon Conservation, Conservación Amazónica (ACCA).

“We are not minimizing the importance of the fires, but our findings are showing that deforestation is also the critical issue,” Finer told Mongabay. “The world needs to be as upset and alert to deforestation as they were to fires, because the deforestation is how this whole system, this whole process is starting… We need the same attention and awareness that there was with the fires in terms of deforestation because both go together.”

Time lapse video above shows deforestation followed by fire in the Brazilian state of Amazonas, in the Amazon region. Data: Planet, ESA.

In August, tens of thousands of active fires ravaged the Amazon region and triggered an international outcry, with protesters in Brazil and around the world demanding effective action from President Jair Bolsonaro to curb the blazes. The Amazon fires came into the spotlight after São Paulo’s skies suddenly turned black with smoke on August 19, prompting an outpouring of concern across social media worldwide under the #PrayforAmazonas hashtag, which reached more than 300,000 tweets in just two days.

Bolsonaro immediately reacted, suggesting, without any proof, that NGOs could be behind the fires as a retaliation against the government because of the suspension of a $33.2 million payment from Norway to the Amazon Fund.

Experts promptly highlighted the link between deforestation and the fires, given the lack of severe drought this year. According to their analysis, the forest-to-pasture conversion strategy of ranchers in the Brazilian Amazon is to cut rainforest trees, allow the wood to dry, then set it ablaze to fully clear the land and produce ashes to fertilize the soil to grow grass for grazing — a process apparently given scientific weight by the MAAP findings.

The new findings also seem to support accusations by Bolsonaro critics, that his inflammatory rhetoric during and after the 2018 election, emboldened ranchers to begin clearing Amazon forest once the new president took office in January 2019.

In fact, Brazilian authorities are currently investigating a group of some 70 farmers and land grabbers in Pará state who allegedly organized a “Day of Fire” on August 10 in support of Bolsonaro and his measures easing environmental enforcement in the country, Globo Rural magazine reported.

Although MAAP’s analysis didn’t detect major forest fires in Brazil to date, the risk still exists as the dry season deepens, given that many fire occurrences were detected on agriculture-forest boundaries, Finer explained.

“The fires… hit the forest line and [seemed] to go out, but [they’re] still impacting the edge of the forest… And these fires burning recently cleared areas can very easily become forest fires. We haven’t seen this yet this year in the moist forest in Brazil, but as the dry season continues, or if there is a [worsening] drought year, then this process of burning recent deforested land will get much, much worse and we could see major forest fires,” he warned.

So far, MAAP has detected major fires hitting native vegetation only in drier ecosystems, including the dry forest of Bolivia and Brazil’s Cerrado savanna.

“When we look at the dry forest in Bolivia, there we did see what everyone had in mind: fires that were out of control, burning natural ecosystems. But in Brazil every time we zoomed in on a fire, we saw the fire burning an already cleared deforestation area. We just never saw a fire, out of control fires, sweeping through the rainforest [in August],” Finer explained.

In the preliminary version of the report — also obtained exclusively by Mongabay ahead of its release on September 11 — the area cleared and then burned totaled 52,500 hectares (equivalent to 72,000 soccer fields).

Back in March, MAAP did detect major forest fires in northern Roraima state, including fires near the Yanomami indigenous territory. Between January and August, fire hotspots in indigenous territories rose 88 percent compared to the same period of 2018, according to the Catholic Church’s Indigenous Council (CIMI), citing data from Brazil’s National Institute of Space Research (INPE).

Update (September 24, 2019): This article was updated to include MAAP’s latest figures.

Banner image caption: Planet image of fires in the Amazon on August 16, 2019 in Pará state, processed by the Center for Global Discovery and Conservation Science and Planet at ASU.