The Supreme Court ruling on 28 February on the constitutionality of Brazil’s New Forest Code, described by some as “the most important environmental ruling in Brazil’s history,” is being met with dismay by many of the nation’s environmentalists. That’s because – despite the contrary views of high court ministers – environmentalists feel the ruling places the economics of commercial agribusiness above environmental protections.

The ruling, say conservationists, also serves as a major setback at a time when many scientists and environmentalists are calling on Brazil to take firmer measures to stem increasing deforestation, particularly in the Amazon, and to meet the country’s Paris Agreement carbon cut pledge.

Rodrigo Justus, the lawyer of the Brazilian Confederation of Farming (CAN), expressed satisfaction at the ruling. “Most of the law, including its main elements, was recognized as constitutional,” he said. “It was a difficult judgement to make, mixing science with law, as when you ask: what is more important, so many thousands of jobs or a forest in such-a-such place?”

Environmentalists disagreed: “We didn’t expect to transform the Forest Code but we hoped that aspects, like the amnesty [for illegal deforestation carried out before 2008], would be corrected,” said Nurit Bensusan, coordinator for the Program of Socioenvironmental Rights and Policies at the NGO Instituto Socioambiental (ISA, the Social-Environmental Institute). It didn’t happen: “The ruling is a reward for those who deforested illegally and a punishment for those who didn’t.”

Top scientists are also worried because the Amazon appears to be close to “a point of no return” – an ecological tipping point at which forest will convert to savannah. Scientists Carlos Nobre and Tom Lovejoy, evaluating the combined impacts of forest conversion, climate change, and increased wildfires, say this tipping point is likely to occur when the Amazon is 20-25 percent deforested. The region is already at 17 percent deforestation at least, putting the region dangerously close to the tipping point.

Until the New Forest Code (Lei 12.651) was approved in 2012, the primary law regulating deforestation was the Brazilian Forest Code (Lei 4.771), passed in 1965 by the country’s military government. Although the military suppressed many forms of opposition, it sought to protect the country’s forests at a time when coffee and sugarcane monocultures were taking over more and more land.

However, many analysists say that the 1965 code was not effectively implemented, and didn’t stem the tide of rapid deforestation that had begun to occur as cattle ranching and soy and corn production took hold in the Amazon. Thirty years after the code was approved, Brazil recorded its highest rate of Amazon deforestation ever, with over 29,000 square kilometers cleared in 1995.

By 2012 Brazilian agriculture had changed, with the rapid advance of industrial agribusiness, which was expanding from the center-west deep into the Amazon basin. Large scale farmers had also by then gained a powerful political voice, and were well represented by the bancada ruralista, the biggest lobby in Congress. The ruralists pressed for a radically revised forest code that would reflect agriculture as the most important sector of the Brazilian economy.

With the support of President Dilma Rousseff, the bancada ruralista pushed through the New Forest Code that drastically reduced the parameters of environmental protection and brought generous benefits to a wide range of rural elites, farmers, ranchers and land-grabbers, some of whom had been illegally cutting down forest for many years.

Among other measures, the 2012 code freed farmers from an obligation, enshrined in the earlier code, to reforest an area of 41 million hectares (158,300 square miles) – an area the size of the state of California and a reforestation effort that, were it to happen, could be crucial to Brazil achieving its Paris Climate Agreement carbon reduction target.

One minister, one vote

Many environmentalists and social movements reacted in horror to the passage of the 2012 New Forest Code. In response in 2013, the General Attorney’s Office (Procuradoria Geral da República), the highest level of the Federal Public Ministry (MPF), and the left-wing political party, PSOL (Socialism and Freedom Party), went to court with four legal actions, claiming that 58 of the 84 articles of the New Forest Code infringed the Brazilian constitution and should be withdrawn. All 58 articles, they said, were favorable to deforesters and removed environmental protections guaranteed under the 1965 code.

As the Supreme Court debated the code this February, conservationists were cautiously optimistic they would win on most articles. At first, the ministers (who voted separately) were tied, five voting for and five voting against. Then, on 28 February, Celso de Mello cast the tie-breaking vote, mostly against the environmentalists. This came as a surprise because on many occasions Celso de Mello had spoken in support of conservation, saying that the environmental rights of future generations should prevail over economic and business interests. He had also expressed the view that deforestation had already reached “extremely serious proportions” in Brazil.

Instead, Celso de Mello cast his deciding vote largely in favor of the constitutionality of the less strict 2012 New Forest Code. Particularly shocking to environmentalists was the Supreme Court’s judgement that deforesters who illegally cleared forest before 22 July 2008 will not be forced to pay the fines they were given.

Conservationists regard this as an amnesty that will encourage further destruction. “It sends a sign that there is no problem in illegally deforesting because one day you’ll be forgiven”, said Carlos Nobre, a respected member of the Brazilian Academy of Sciences. “At some point Congress will pass a law that regularizes what you have done, and so it will go on.”

The Temer administration disagrees. The Advocacia-Geral da União (the Federal Attorney General’s Office), which represents the government in legal proceedings, said that deforesters had to make good the damage they had done. “This isn’t an amnesty but the conversion of the fine into a requirement to carry out environmental services and the debts will only be forgiven when this is done,” the AGs office said. Put simply, the illegally deforested land will have to be reforested, something that conservationists believe will not happen without much more rigorous enforcement measures.

Some analysts believe the ruling casts doubt on the capacity of Brazil’s judicial system to deliberate on highly complex technical questions regarding the environment. Márcio Santilli, founder member of ISA, told Mongabay that, while certain ministers recognized the fundamental principles of environmental law, “some ministers had difficulty in evaluating the practical implications of the various legal regulations under discussion,” – an evaluation which certain ministers seemed to recognize themselves.

According to scientist Philip Fearnside, there was another problem: a concerted public relations campaign by agribusiness. “In the days before the ruling, there was an avalanche of stories in the press promoting the ruralists’ point of view, and these opinions were repeatedly highlighted on television, which reported this propaganda as if it were scientific information,” Fearnside said.

The high court having decided, no further appeals are possible.

However, the ministers’ decision isn’t all bad news for the environment. In an editorial, ISA said that it was important not to overlook that some part so the ruling represented real victories and that advances had been made in the way the environment is viewed in Brazilian law.

“The legal basis on which the ministers made their votes confirmed essential elements of socio-environmental law, and this will act as a compass for future decisions in the Legislative and in the Executive.” It added that the plenary of the Supreme Court had “recognized the consequences of deforestation in Brazil and its intimate connection with climate change, loss of biodiversity, water supply and the quality of life.” For many, these advances may seem like crumbs of comfort, but they are important none the less, say experts.

The high court decision was not altogether one-sided. The ministers ruled in favor of some environmental protections, and against others. The following chart maps out the decision highlights and their impacts. 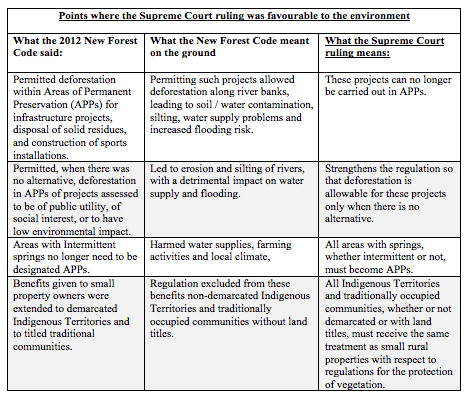 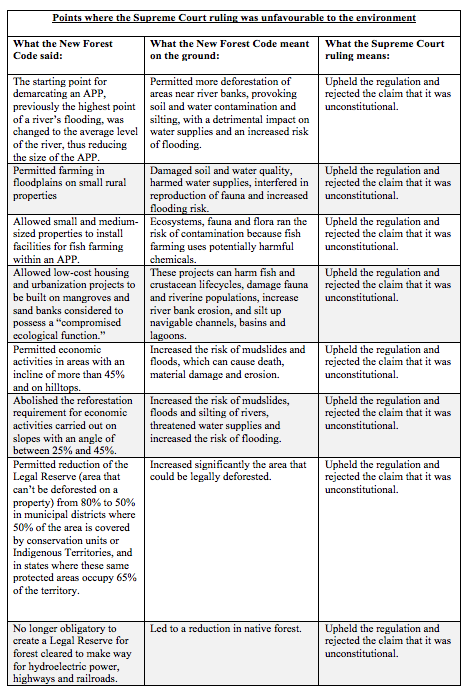 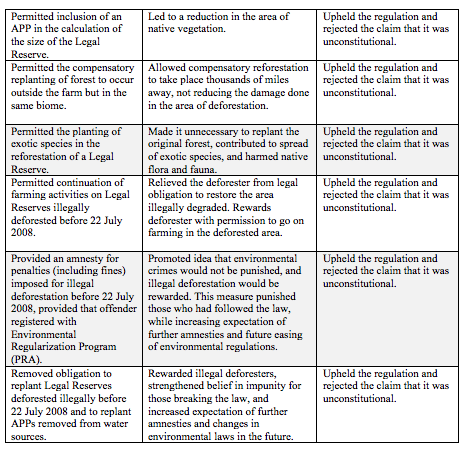