If nothing done, extinction levels in the ocean could soon resemble those on land 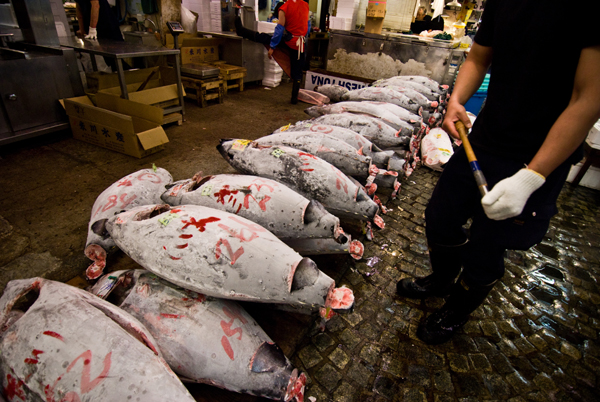 Bluefin tuna. Although most bluefin tuna species have been decimated by overfishing, they are still caught. Photo by: Stewart Butterfield.

This is obvious, but still important: humans are not a marine species. Even as we have colonized most of our planet’s terrestrial landscapes, we have not yet colonized the oceans. And for most of our history, we have impacted them only on the periphery. A new review in Science finds that this has saved marine species and ecosystems from large-scale damage and degradation—that is, until the last couple centuries.

“We have driven cod stocks down to unfishable levels, certain shark species have crashed by [more than] 90 percent, we are now wringing our hands about bluefin tuna declines in both the Atlantic and Pacific,” lead author Douglas McCauley from the University of California Santa Barbara told mongabay.com. “We see these sorts of headlines constantly sprinkled across the news.”

With the rise of industrialized fishing, super trawlers, deep sea exploitation, pollution, and aquaculture, the human impact on the oceans is escalating rapidly and may be on the same course as what happened on land beginning in the Nineteenth Century: an industrial revolution of the oceans with the associated ecological impacts.

“There are factory farms in the sea, and cattle-ranch style feed lots for tuna. Shrimp farms are eating up mangroves with the same appetite with which terrestrial farming consumed native prairies and forest,” added co-author Steve Palumbi with Stanford University. “Stakes for seafloor mining claims are being pursued with gold rush-like fervor. Three hundred-ton ocean mining machines and 750 foot fishing boats are now rolling off the assembly line to do this work.”

Still the majority of these marine impacts are relatively recent, most of them only going back a few decades. 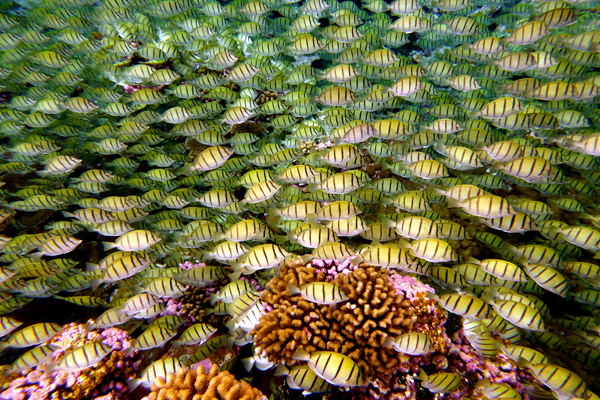 Marine abundance in a coral reef. Photo by: Katie Davis.

“What is easy to forget as we lament these truly depressing numerical declines in marine fauna is that, relative to land, the course of marine defaunation has involved relatively few outright species extinctions,” said McCauley

But looming in the background of all of this—and rising to the foreground—are climate change and ocean acidification. Researchers have warned repeatedly that these twin carbon impacts could lead to mass extinction across marine environments, if we fail to reign in fossil fuels quickly.

In other words, according to McCauley and his colleagues, the oceans have not yet suffered the same human impacts as terrestrial ecosystems, but they could soon without better care and management.

Extinctions in the oceans versus land

To date, the IUCN has confirmed that humans have driven 15 marine animals to extinction over the last 500 years, including some famous examples like the great auk, Stellar’s sea cow, and the Caribbean monk seal. However, in contrast, the IUCN has recorded 514 extinctions of land-based animals during the same time period, pointing to a much greater extinction crisis on land so far.

The researchers believe extinctions have been rarer in the oceans, not just because major human impacts started later, but also since marine species “tend to be more widespread, exhibit less endemism, and have higher dispersal,” according to the study. Most land extinctions have occurred on islands, where species literally have no-where to run, but such tiny, isolated ecosystems are much rarer in marine environments.

However, McCauley cautions that the 15 formally recognized marine extinctions should be viewed “as an absolute minimum estimate.”

“We are a bit slow to declare that an extinction has occurred in the oceans because it is so hard to definitively prove that there might not be a couple more of an endangered species out there somewhere, a little deeper maybe, or hidden under a coral ledge we can’t get to,” he explained. “It took us 73 years to find the Titanic and that is a 50 thousand ton ship. That helps us recall just how hard it is to find out if a last goby or a last shrimp might still be out there.”

In addition, the oceans probably contain a number of lost extinctions, or extinctions that have gone totally unrecorded by scientists. In fact, of the 15 extinctions identified to date, only three of them are invertebrates. Marine birds, mammals, and fish have been far better studied, and monitored, than the world’s more diverse, but less charismatic, lifeforms.

McCauley points to bottom trawling as one type of fishing that has probably pushed species never known to science to extinction.

“We can see the sediment plumes roll off trawlers as they chew up the seafloor from space,” he said. “We can now trawl in some of the deepest parts of the ocean and this measurably squashes and flattens out the seafloor. In my opinion, it is not possible that we have disturbed this much of the ocean floor and have not driven at least some undescribed species extinct. And this is just one form of fishing, and fishing is only one form of marine disturbance.”

Much of this comes down to a simple lack of data and knowledge about the world’s marine environments. It’s often pointed out that our maps of the moon and Mars are more detailed than anything we have of the ocean floor. Moreover, studying marine species has proven incredibly challenging, and much like land species, the big and beautiful still take precedent.

Marine defaunation and the other three extinctions

But extinctions aren’t the only measure of impact on the oceans; in fact, given the dearth in data and the paucity of monitoring they are probably a poor measure. Instead, researchers say we should really focus on “defaunation,” a term that has become increasingly popular among biologists and ecologists to describe human-impacts on animal communities. 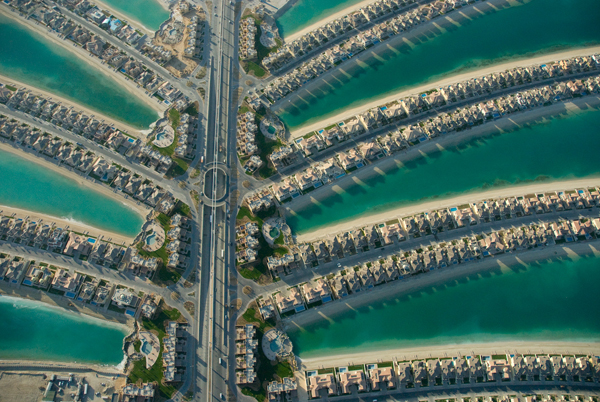 Artificial Islands, known as The Palms, in Dubai, built for luxury housing and resorts. Photo by: Alexander Heilner.

Fauna encompasses all animals of a certain area (like flora for plants), including both vertebrates and invertebrates, as well as their diversity and abundance. So, the term defaunation, like deforestation, means the total loss of animals. This includes traditional extinctions and overall biodiversity loss, but also declines in populations.

Through examining defaunation in the oceans, McCauley and his colleague’s paper also focuses on three types of extinction: local, commercial, and ecological.

“Imagine if the global population of garbage collectors crashed to only 100 individuals,” McCauley explained. “It would really be no comfort to us, as we waded through streets full of trash, to know that somewhere in the world garbage collectors still existed—because the critically important services that they provide would have gone functionally extinct. It is the same for marine animals. They do things that are important to humans and are important to their own ecosystems.” 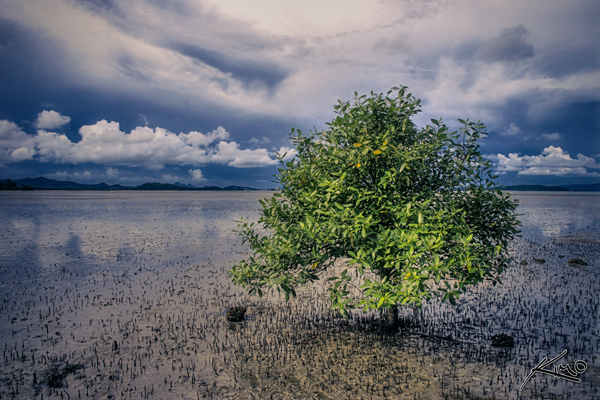 Mangrove tree in Phuket Thailand. Considered one of the most important marine ecosystems, the world has lost more than half of its historic mangrove forests. Photo by: Kim Seng.

Defaunation describes what has happened to whales, sharks, rays, marine birds, sea turtles, and many commercially-targeted fish and invertebrates. While they’re still around, many of their populations have been decimated. For example, a 2008 paper by Jeremy Jackson found that populations of large predatory fish worldwide have fallen by 90 percent, oysters in coastal seas and estuaries by 91 percent, shorebirds by 62 percent, and pristine coral reefs by over 60 percent, among other alarming statistics.

“All signs indicate that we may be initiating a Marine Industrial Revolution. We are setting ourselves up in the oceans to replay the process of wildlife Armageddon that we engineered on land,” McCauley said.

So, what can be done? A lot of things, according to McCauley and colleagues.

“We need to carefully and thoughtfully manage this emerging wave of industrial use of the oceans,” said McCauley, who admits “we need food, minerals, and energy from the oceans—but all of this extraction can’t be left to run wild. We need to thoughtfully zone out marine development so it takes wildlife into consideration, not vice versa.”

And this isn’t just about protecting wildlife, but also about safeguarding protein-rich food for some of the world’s poorest. Around a billion people—most of them in developing countries—depend on fish and other seafood for the majority of their protein.

Artisanal fisherman in Cebu, Philippines. Many in developing countries depend on marine environments for their protein. Photo by: Malin Pinsky.

“According to the U.N. Food and Agriculture Organization (FAO), 40 times more wild animal biomass is harvested from the oceans than from land,” the researchers write. “Declines in this source of free-range marine food represent a major source of concern.”

To better safeguard the ocean, the authors suggest more Marine Protected Area, which to date only cover around 3 percent of marine waters. But they also note that this oft-repeated solution can’t be the only approach given how far many ocean species roam and disperse. Instead, other solutions must include improved management, much stricter zoning, and innovative programs.

“We need policy to manage these species and their habitats in over 95 percent of the oceans that are not set aside in marine protected areas,” McCauley said. “There are some smart policies already in circulation for doing this, for example whole ecosystem management plans [and] incentive based fisheries. More than anything else, it is important to realize that we have to put these policies and tools already in front of us into place immediately and commit to them.”

Yet, the biggest challenge—the most global challenge—remains the evil twins of climate change and ocean acidification.

“This may be the hardest and yet most important part of slowing marine defaunation,” said McCauley. “Big marine protected areas and smart harvest policy isn’t going to do us any good if we cook and acidify ocean habitats. By some measures climate change is going to be harder on marine animals than it is on terrestrial fauna.” 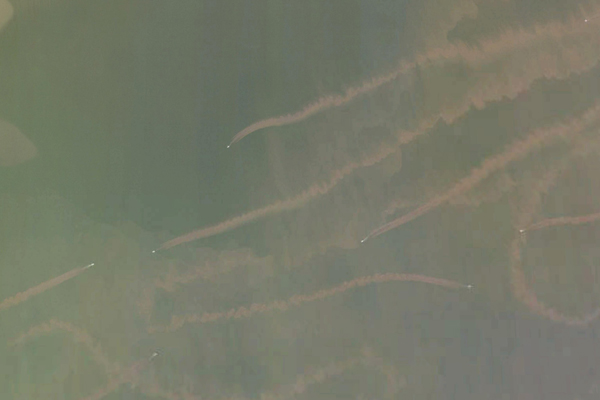 Trawlers scrapping the ocean floor off Louisiana. Trawling is one of the most destructive fishing practices as it sweeps across the seabed taking up everything in its path. Photo by: Malin Pinsky.

Scientists especially fear for coral reefs as the world’s oceans both heat up and acidify. Research has shown also that a number of shell-dependent invertebrates could be hugely impacted by ocean acidification, which is happening at a faster rate than anytime in the last 300 million years. Ocean acidification may also screw with the behaviors of many marine species, including fish.

“Yet, marine animals are already exhibiting some impressive potential to adapt to this change,” noted McCauley. “If we can slow rates of ocean warming and acidification, even a bit, we buy these animals more time to adapt and can do a lot to help protect the intrinsic resiliency of the oceans.”

This means rapidly curtailing global greenhouse gas emissions, which continue to rise despite decades of research and warnings.

But, ocean conservation also suffers from a lack of direct contact with most people.

“What is out of sight is often out of mind,” he said. “If monarchs stop appearing in your backyard, alarm bells ring, and that becomes the stuff of local newspaper headlines. We pay attention to defaunation when it occurs in the terrestrial ecosystems that we hike in, garden in, and camp in. We are doing a much less good job of tracking defaunation and responding to defaunation in the oceans because it is simply such a foreign environment to so many of us.”

On a positive note, though McCauley said there was time remaining to save the vast majority of the ocean’s species, including its megafauna.

“We still have the raw ingredients we need for recovery. There is hope for sharks and tunas, but there is not that same hope for the dodos, mammoths, moas, passenger pigeons, and hundreds of other terrestrial wildlife species that have crossed over the extinction threshold.” 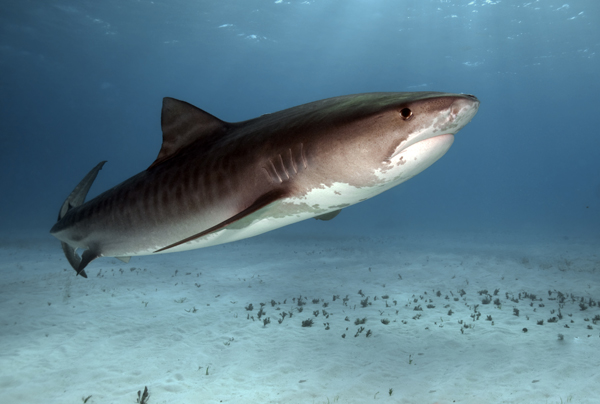 Tiger shark. Many shark populations have fallen by over 90 percent with the biggest threat being shark fin soup. Photo by: Greg Amptman. 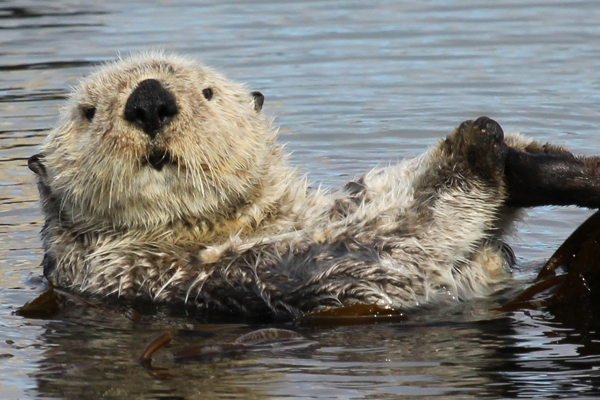 Sea otters are one of the happy stories from marine conservation. From near extinction they have recovered in some parts of their range. Photo by: Andrew Reding. 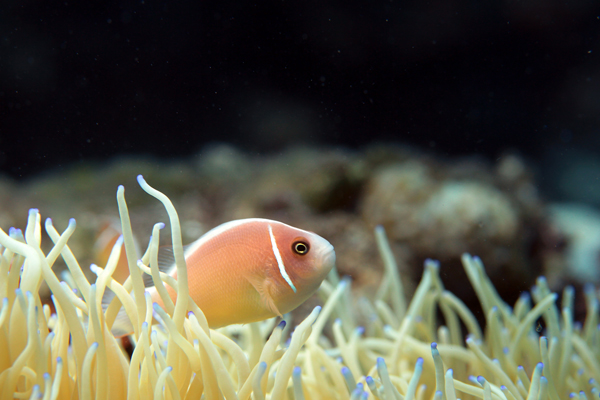