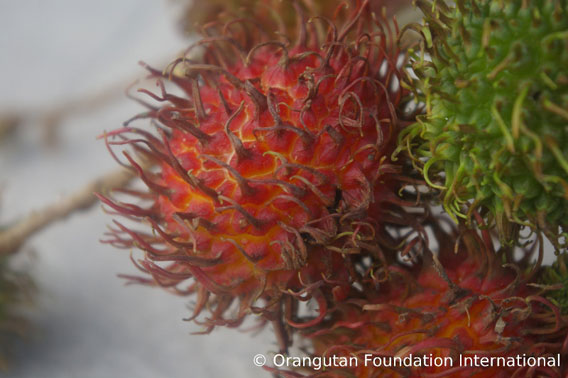 Among conservationists and biologists, the mega-island of Borneo is a sort of Mecca. Its rich plant and animal biodiversity, as well as high degree of endemism (unique species found nowhere else) make it a naturalist’s dream.

There is one aspect of this biological richness which applies to the wellbeing and happiness of all of Borneo’s residents, human and animal, in a very direct way: fruit. From wild forest berries to juicy cultivated rambutans, fruit permeates the ecology, landscape and culture of Borneo. On the island there are over 70 wild fruit tree species and around 45 cultivated species that are consumed by people (1). Science has certainly not yet documented all the fruit consumed by wildlife, but we know that the total must be over 500 species.

The reason for the abundance of wild fruits in Borneo is that the island, especially the productive coastal forest, has one of the richest vascular plant assemblages in the world – over 10,000 vascular plants (2), over a thousand of them true trees (4). This plenty creates favorable conditions for the hundreds of frugivorous animals that live here. Orangutans, whose diet can consist of up to 90% fruit (Galdikas, pers. comm.); Borneo’s 13 other primate species; sun bears, the smallest of their kind and voracious fruit-eaters; civets, fruit bats, hornbills, wild pigs and many other animals either base or supplement their nutrition with the fruit from the forests of Borneo.

Not only is the sheer number of species impressive, but the diversity of colors, flavors, sizes and shapes of the fruit (evolved to attract specific seed dispersers while repelling predators) is also astounding. If one is lucky to enter the forest during the fruiting season on a good year, one is likely to see fruits ranging from the tiny maroon berries of the buttressed ubar tree to the melon-sized kusi and sembuang fruits high in the canopy. Malay sun bears love kayas; a round, bomb-like fruit which sits in tempting piles below its tree, but local people describe its effects on humans as similar to being drunk. The durian, famous for being the fruit that “tastes like heaven and smells like hell”, has a wild cousin called karantungan , whose forbidding green spikes hide a tender, creamy flesh. Vines and lianas also nourish forest dwellers, since many of them, such as the popular gita’an, also bear fruit. The coveted mentawa fruit, which has deep orange nuggets nestled in a stringy casing, has a mild, sweet, milky flavour, while duku hutan’s transparent contents taste like tangy grapefruit.

The Dayaks, indigenous dwellers of Borneo, whose name resonates with headhunting for many people, are in fact more frequently concerned with the sweet, innocent products of their traditional agroforestry orchards. Of the aforementioned 70 forest fruit species, over half are also grown by people. Given that many of the ‘domestic’ cultivars are also descendants of wild varieties, the line between agriculture and forest products really begins to blur.

Dayak culture reflects the high significance of fruit in their lives. During durian season, small pondoks (shelters) appear all over villages as expectant families gather below the soaring trees and wait for the precious fruit to fall (the durians cannot be collected any other way and being on the spot to get them as they fall prevents theft and rotting of the fruit). The fruit is then eaten in a variety of ways: shared with friends on the porch, mixed into morning coffee or added to sweet mung-bean soup. To preserve the fruit on windfall years, many local people fry the creamy flesh with salt – a flavor that takes a long time for foreigners to become accustomed to.

Another perennial favorite is rambutan; a sweet, lychee-like fruit covered in a red skin studded with thick ‘hairs’. A fruiting rambutan tree is a beautiful sight but the most desirable fruits always grow higher up. A good measure of the status of village children depends on their ability to climb and retrieve these juicy treats. The cempadak, a smelly relative of the better-known jackfruit, is a very multi-use tree. The wood can be used to make machete handles and the branches provide shade for the garden. The fruit, which has a pungent, sweet odor and gooey contents, can be eaten in several ways: the unripe fruit can be cut up in chunks and made into a rich stew with coconut milk, the ripe pieces can be extracted from the sticky covering and eaten raw and the leftover skin and pits can be deep-fried and salted for a quick snack.

As the forests and traditional livelihoods of Borneo disappear to make way for palm oil plantations and other forms of development, the exotic and unique fruits that add so much color to life here disappear also. If for no other reason, the tropical rainforests of Borneo and other parts of the world are worth protecting and conserving for future generations of gourmands as well as endangered wildlife. 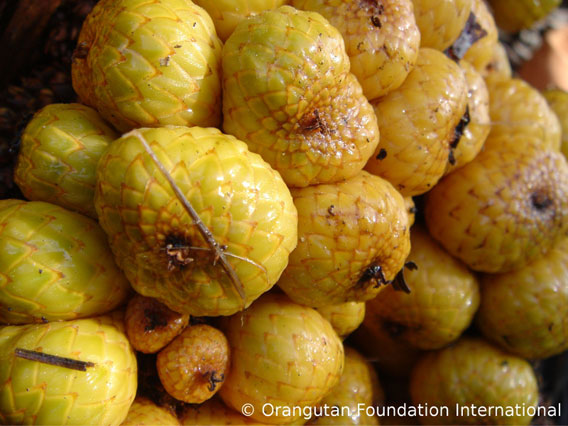 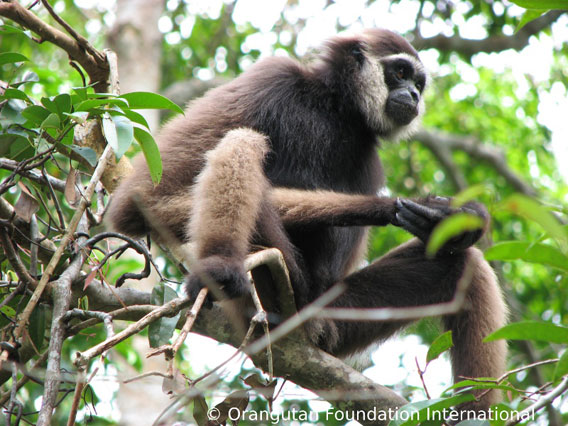 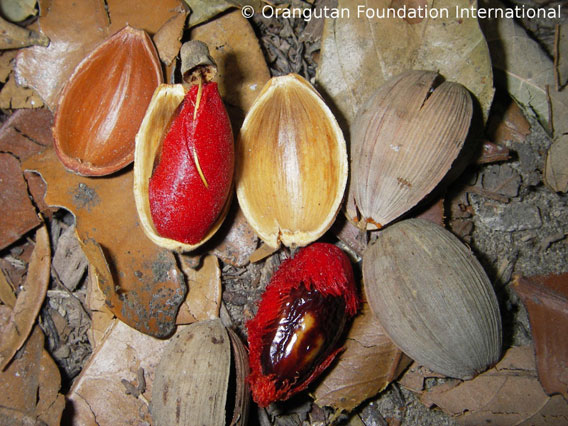 Penmpalaan is a wild fruit sought after by Borneo’s orangutans. Photo courtesy of Orangutan Foundation International. 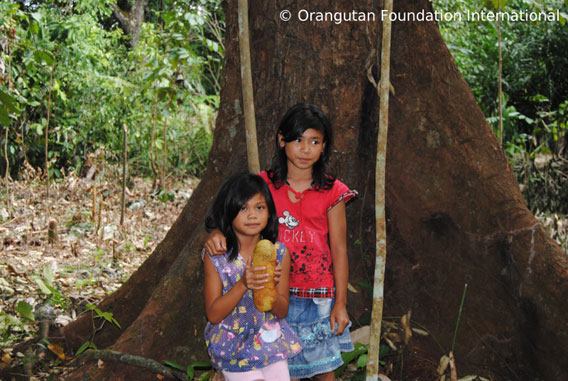 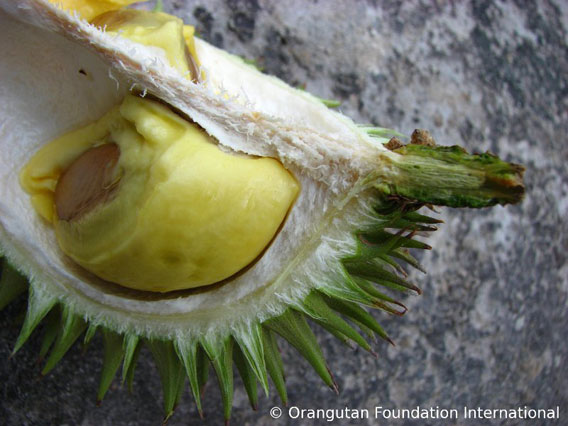 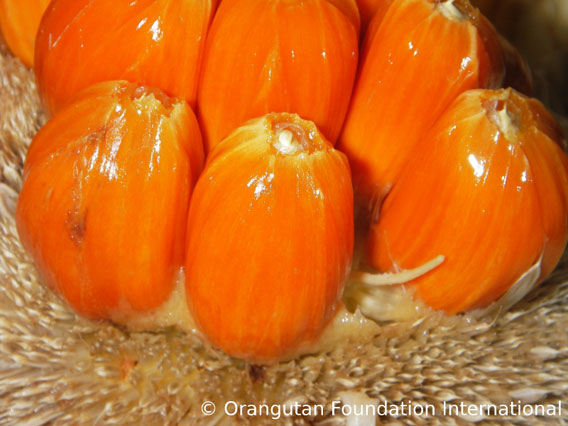 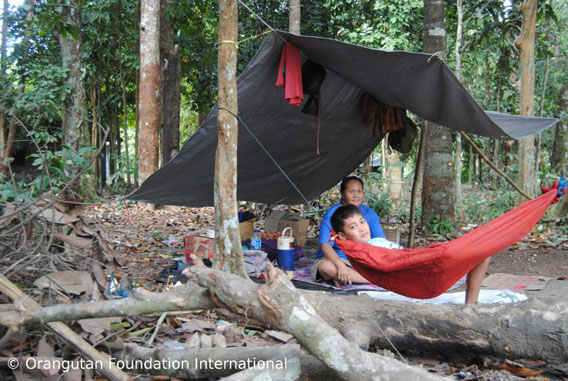 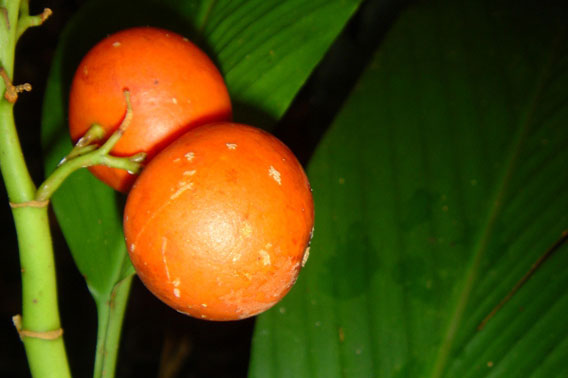 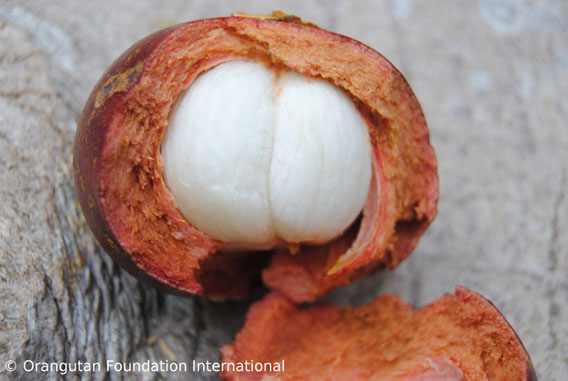 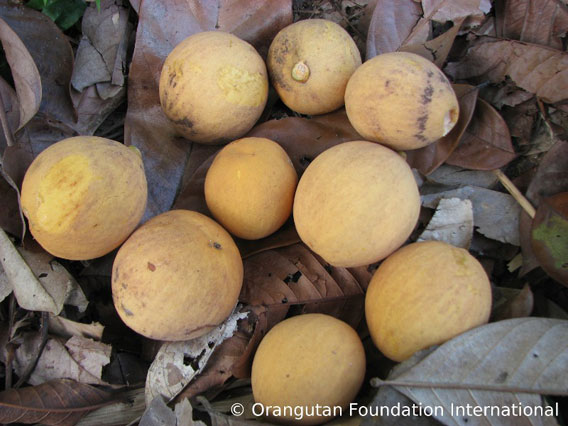 Pictures: Researchers to track proboscis monkey in Borneo by satellite

(07/24/2011) Researchers with the Sabah Wildlife Department and Danau Girang Field Center in Malaysia have become the first to fit a proboscis monkey with a satellite tag.

(07/06/2011) Despite rising criticism over deforestation and human rights abuses, Sarawak is maintaining its target of 2 million hectares of oil palm plantations by 2020, reports Malaysian state press.