Satellites have detected forest clearing within Triunfo do Xingu this year, an area that’s supposed to be a legally protected swath of Amazon rainforest in Brazil’s northern state of Pará.

Home to jaguars, howler monkeys, rare margays, and a wellspring of other diversity, the protected area was created in 2006 as a sustainable use reserve, meaning that within its bounds (an area more than half the size of Belgium) landowners are legally required to keep 80% of their forests intact.

However, despite this requirement, 35% of the primary (or old-growth) forest within the Triunfo do Xingu Environmental Protection Area (APA) was lost between 2006 and 2021 — more than 533,000 hectares (1.32 million acres), according to satellite data from the University of Maryland (UMD), visualized on the Global Forest Watch platform.

That makes the Triunfo do Xingu APA one of the most deforested slices of the Brazilian Amazon in recent years, putting it in the top three of Brazil’s list of most deforested protected reserves. 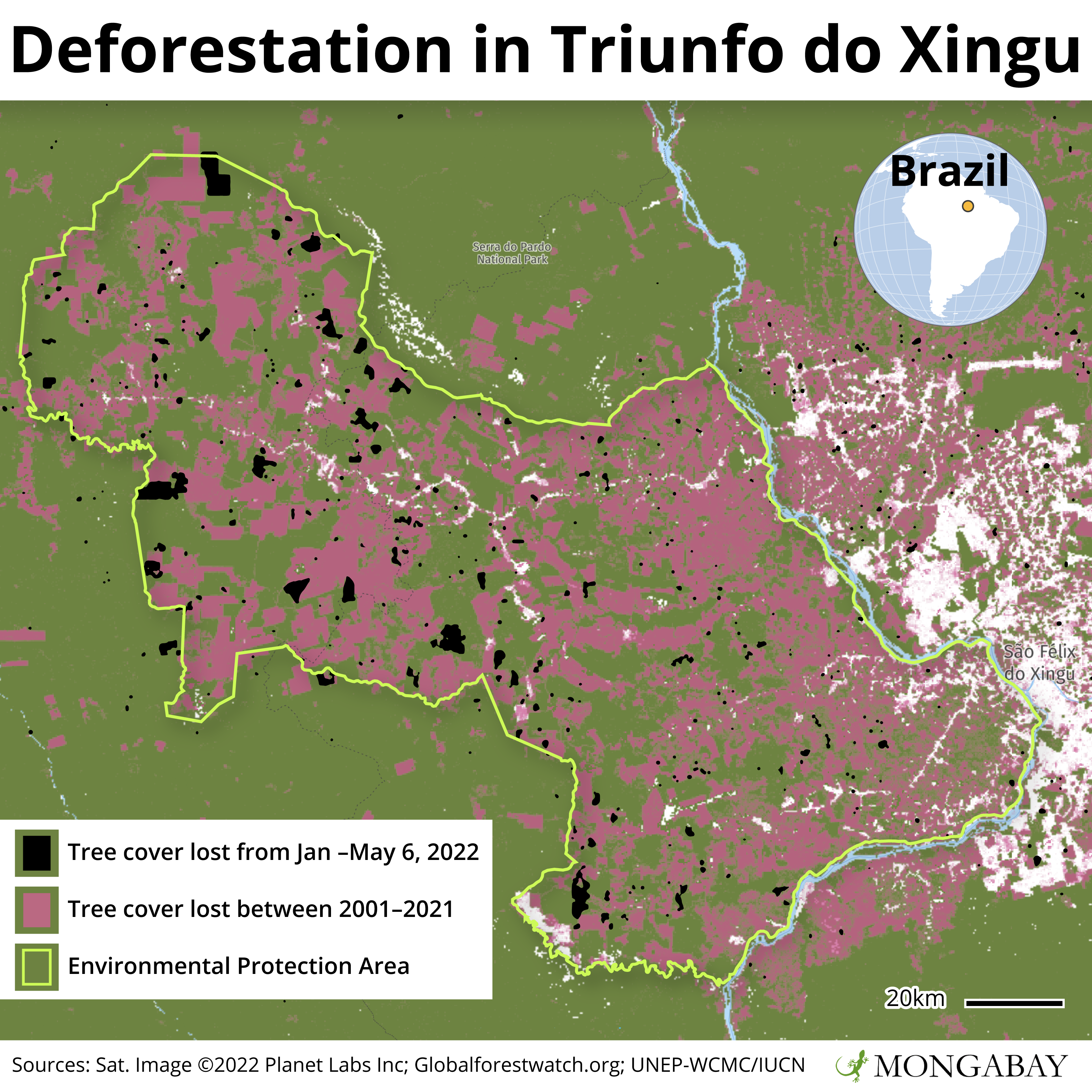 The highest amount of forest loss since the creation of the protected area occurred in 2020, at almost 70,000 hectares (173,000 acres) — an area nearly the size of New York City. Although deforestation decreased in 2021, loss that year was still nearly twice the average rate between 2002 and 2021.

Deforestation in the region is largely driven by cattle ranching, according to previous reporting in 2020. In the Amazon, farmers and ranchers use slash-and-burn techniques to clear forest for pasture. In São Félix do Xingu municipality, where the protected area lies, there are nearly 20 times more cattle than people.

“The Triunfo do Xingu APA was created to allow some kind of human activity in a sustainable way,” Larissa Amorim, a researcher at Imazon, an NGO monitoring the forest clearing, told Mongabay in 2021. “But we see that it is not sustainable at all. And the illegal activities that are taking place there end up spilling beyond it.”

The Triunfo do Xingu APA was intended to protect wildlife and serves as a buffer for vulnerable surrounding areas, such as the Apyterewa Indigenous Territory and the massive Terra do Meio Ecological Station, but deforestation has spilled over.

“[The Terra do Meio Ecological Station] should be completely preserved,”  Rômulo Batista, a campaigner with Greenpeace Brazil, told Mongabay in 2021. “There should be zero deforestation there. But instead, we are seeing rampant forest destruction, which is really worrying.”

“With this weakening of [Triunfo do Xingu], it has become easier to reach conservation parks, Indigenous territories beyond. It ultimately didn’t end up becoming the buffer it was supposed to become.”

Though cattle ranching remains the main culprit behind forest loss, the region has also emerged as a center of land grabbing and illegal mining by invaders who are betting on the continued loosening of environmental regulations and enforcement.

“We have seen a wave of land grabbing,” Fonseca said. “The pattern has changed — many of these openings are now for speculation only, not for planting or pastures.”

Experts say that land grabbers, those who move into an area and clear forest to stake their claim, have been emboldened by the rhetoric and policies of Brazilian President Jair Bolsonaro. In recent years, the government has issued amnesties to land speculators who have invaded conservation units and often then use fire to clear forests on public lands for private agricultural lands.

Protecting Triunfo do Xingu from illegal deforestation and fires has proven extra challenging because it is remote and accessible primarily by boat from the town of São Félix do Xingu. On-the-ground monitoring, control, and the capacity to prosecute those who deforest and set illegal fires has been limited across Brazil, as government agencies and law enforcement that once operated in the Amazon have been largely defunded under the current administration. Bolsonaro has also blamed fires on Indigenous and traditional peoples.

In 2021, 3.75 million hectares (9.27 million acres) of tropical primary rainforest were lost across the planet, a rate of about 10 football fields per minute. More than 40% of that primary forest loss last year occurred in Brazil, according to Global Forest Watch.

“The main driver is the total lack of environmental policy from this government,” said Batista, the Greenpeace Brazil campaigner. “People who are disposed to invading are feeling emboldened.

“These are regions that have the greatest ecological importance and that must be protected to ensure the integrity of the rainforest as a whole,” Batista added. “And this is what we are ultimately losing with this surge in deforestation.”

FEEDBACK: Use this form to send a message to the author of this post.