In a far-flung stretch of the Brazilian Amazon, the dense rainforest is slowly giving way to neat rows of oil palm that stretch for miles. Beyond the plantations, a narrow strip of forest – some of it already razed – separates the plantations from the Waimiri-Atroari Indigenous Territory.

There, in Brazil’s northern state of Roraima, cultivation of oil palm has surged over the last decade, fueled by an ambitious push towards biofuels. Plantations covered some 10,107 hectares across the municipalities of Rorainópolis, São João da Baliza, Caroebe and São Luiz in 2020, according to environmentalists studying the crop’s advance in the region.

But this push towards palm oil is coming at a cost, observers warn. While the industry claims it does not deforest, critics say it is contributing to a surge in demand for cleared land in this region. This is driving cattle ranchers, soy farmers and land speculators deeper into the forest, said Lucas Ferrante, a biologist and researcher with the National Institute for Research in Amazonia (INPA).

“Those cattle ranchers will earn a huge pile of money from [selling] this land and they will migrate to areas that haven’t been deforested yet,” said Ferrente, who is studying the impacts of palm oil in the Amazon. “And they will start deforesting all over again.”

For years, Roraima’s remote location helped it mostly dodge the rampant deforestation plaguing other Amazon states like Pará and Mato Grosso. Nearly 80% of Roraima’s rainforest is still intact, despite the rapid advance of agriculture and cattle ranching in recent years.

But the pressure on Roraima’s forests is growing. From 2008 to 2020, the state lost 850,000 hectares of tree cover, totaling 4.7% of its forests, according to satellite data from the University of Maryland (UMD) visualized on Global Forest Watch. The deforestation rate jumped 216% in 2019, hitting new heights with 61,700 hectares of forest lost.

In the four municipalities where palm oil is booming, clearing also appears to be surging. Since the start of the year, UMD recorded 46,881 tree cover loss alerts in this region – with 65% of these registered in the week of March 15 (it should be noted that these alerts may reflect canopy loss in tree plantations as well as clearing of natural forest). Deforestation is also now encroaching on nearby Indigenous territories like Waimiri-Atroari, Pirititi and Waiwai, threatening the communities that live there.

“These new crops like palm oil are forming a new cycle of deforestation in the region,” Ferrante said. “So that’s why we can’t dissociate production of biofuels in the Amazon from deforestation.”

Brazil’s rush to plant oil palm began more than a decade ago, fueled by a federal scheme aimed at expanding sustainable palm oil production in the Amazon and the Brazilian northeast. The idea was that companies would transform degraded areas where cattle once grazed into palm oil plantations, providing small farmers with a sustainable income without the need to encroach on intact forests.

“It was marketed as a really positive thing,” said Paulo Barni, a professor of forest engineering in the State University of Roraima in Rorainópolis. “The discourse of these companies was all about capturing carbon and reversing environmental degradation. It was seen as a part of this new green economy.”

Most of the world’s palm oil is grown in Southeast Asia, where it has gained notoriety for its role in deforestation and environmental degradation. Now, as top producers Malaysia and Indonesia impose stricter regulations on the palm oil industry, companies are ramping up production in Africa and Latin America, in a bid to meet the world’s insatiable appetite for the oil, which is found in anything from toothpaste to margarine to lipstick.

So far, the bulk of Brazil’s palm oil production has been concentrated in Pará, Brazil’s cattle ranching heartland. But Roraima, where land is cheaper and plentiful, is rapidly becoming an attractive prospect for producers looking to expand. Researchers at the Brazilian Agricultural Research Corporation estimate the state has some 700,000 hectares of land that was already degraded or deforested and could be used to plant oil palm.

Palm oil’s appeal may surge further in Roraima as the state forges ahead with a plan to use biodiesel derived from oil palm to power its electricity network. Lawmakers say the switch will reduce carbon emissions and make the energy supply more reliable in Roraima, which is not linked to the national grid and experiences frequent power outages.

Palmaplan and Brasil BioFuels – two of the country’s largest palm oil producers – are both active in Roraima and have outlined plans to dramatically scale up their output in the state over the coming years, adding thousands of hectares to their plantations. Palmaplan has already bought up some 30,000 hectares of land in the Rorainópolis region.

Brasil BioFuels did not respond to a request for comment. In an emailed statement to Mongabay, Palmaplan said it does not cultivate oil palm in areas with primary forest deforestation and argued that its plantations actually act as a “barrier against the advance of deforestation.”

“The planting of oil palm contributes to the recovery of local vegetation, since it is carried out in previously degraded areas – in practice, cultivation plays an important role in protecting the soil and preserving the native vegetation around it,” the company said.

“This is an area where the demand for terrain is much higher,” Barni said. “And subsequently, the offer for this so-called abandoned land is much higher.” 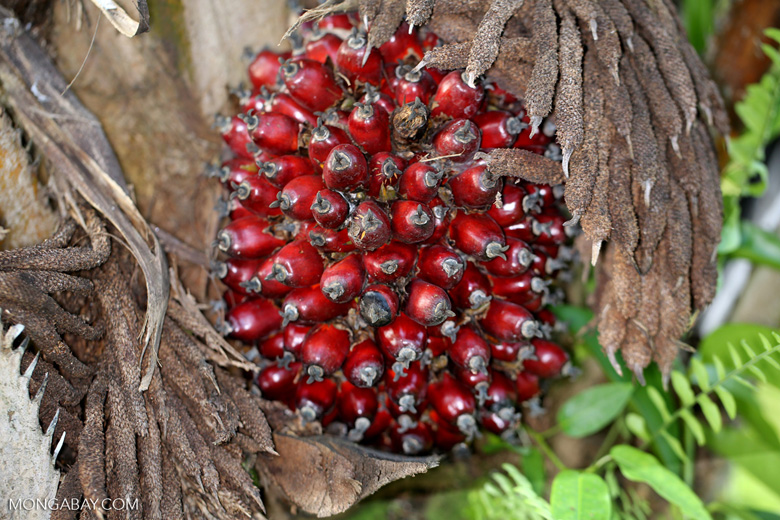 Palmaplan said it is committed to sustainable growth and expects everyone else in the “local community – including producers, settlements, indigenous areas, among others – to maintain due respect for the environment and the relevant environmental legislation” as well.

Palm oil companies maintain that they only plant in areas that were cleared before 2008. But, even though most plantations in Roraima do occupy land that once served as pasture, data shows nearly 4% of the terrain the companies use to grow oil palm was cleared between 2008 and 2019, according to an analysis done by researcher Glauria Gomes de Morais at the State University of Roraima.

And pressure on the buffer zones around plantations – meant to serve as a protective barrier for the Indigenous lands that lie beyond – is also mounting. Some 5,359 hectares have been cleared since 2008 in the buffer area around Palmaplan’s plantations. Around plantations owned by BioFuels, 10,572 hectares were razed in the same time period, Morais’ research shows.

“We can’t claim that palm oil plantations are driving this deforestation,” Morais said. “But it’s clear that a significant area around them has been cleared recently.”

As the demand for land increases, incursions into Indigenous lands that neighbor palm oil plantations are also on the rise, with satellite images showing swaths have been cleared within the Trombetas/Mapuera, Waiwai and Waimiri-Atroari territories.

The Pirititi Indigenous territory is also under attack, said Alisson Marugal, federal public prosecutor for Roraima. The area – home to isolated Indigenous people – has not yet been fully demarcated and its protected status is poised to expire this year. In a frenzied rush to lay claim to it, loggers, speculators and land grabbers have been descending on the area since 2019.

Many are registering plots of the territory with the Sistema de Cadastro Ambiental Rural (CAR), in what Marugal calls a “classic form of land grabbing.” An investigation by his office found more than 500 such registrations within Pirititi, which lies in the municipality of Rorainópolis.

Some 47.8% of the territory has already been claimed by invaders using illegitimate CAR registrations, according to the Instituto Socioambiental, an NGO that defends environmental diversity and the rights of Indigenous people.

While it is not clear whether palm oil is playing a role in this advance into Indigenous territories, Marugal said the broader scramble for land appears to be feeding speculative activity in protected areas like Pirititi.

“This advance of logging and deforestation in the territory really worries us,” Marugal told Mongabay. “Especially because this Indigenous territory hasn’t been demarcated yet, so its protection status is really fragile.”

Palmaoil rejected claims that its activities may be contributing to higher demand for land or encroachment into Indigenous territories, stating that its plantations in Rorainópolis were some 50 km from the nearest protected territory.

Those invading Indigenous territories have been emboldened by the rhetoric of president Jair Bolsonaro, who received overwhelming support in Roraima when he was elected in 2018. Bolsonaro, a far-right populist, has railed against environmental protections and vowed to allow miners, loggers and cattle ranchers into Indigenous areas.

“The discourse about opening up these areas to agribusiness legally is encouraging those who are going in there,” said Philip Fearnside, a biologist and scientist at INPA.

For Indigenous communities, changing climate patterns are posing another set of challenges too.  Edinho Batista, coordinator of The Indigenous Council of Roraima, says rain cycles are shifting dramatically – a change he attributes to the rapid expansion of large-scale agriculture in the region.

“We are feeling the impacts, they’re really significant,” said Batista, who is part of the Macuxi ethnic group. “We have always relied on patterns of rains to grow and cultivate our food – and today, we can’t rely on these patterns anymore. There are clear changes in the climate.”

Indigenous rights activists say they’re also worried about the pesticides that palm oil plantations are doused with and the runoff from processing mills, which frequently end up in soil and water sources. Batista noted that, as large-scale agriculture advances in the region, Indigenous communities are seeing their health deteriorate.

“They are using chemical products and these seep into the water, into the air, into the soil in our territories,” he said. “They contaminate the animals, and we end up eating the fish that has been poisoned. People end up getting sick – they are getting cancer, hypertension, diabetes.”

Palmaplan denied it uses any toxic materials in the cultivation of palm oil, saying it “always complies with all relevant environmental and health legislation.”

But in Pará, federal prosecutors are locked in a legal battle with Biopalma, Brazil’s top palm oil producer, over alleged pesticide contamination on the Turé-Mariquita Indigenous Reserve. The Tembé people who call this territory home say their water has been poisoned by a toxic mixture of insecticides and herbicides that nearby palm oil mills dump into the river.

As the COVID-19 pandemic continues to batter Brazil, there are worries outsiders may bring the virus with them. Because of their relative isolation, Indigenous people tend to be more vulnerable to even common diseases. The risk to these communities – which have a history of being decimated by disease brought in from the outside – is even greater with a deadly virus like COVID-19.

For Batista, the advance of speculators hungry for land is threatening not just the health of Indigenous communities, but also their fundamental rights. “We continue to resist – but our right to our territory is being attacked,” Batista said. “The deforestation here is increasing, it is spiraling out of control.”