by Elizabeth Claire Alberts on 26 March 2021

From the eye of a satellite, the ocean is streaked with smoky white lines that flow and twist like scribbled handwriting across the surface. But these lines aren’t naturally occurring features — they’re sediment plumes from large trawling vessels that scrape the seafloor with nets and heavy equipment, trying to catch bottom-dwelling species like shrimp and whiting.

The environmental consequences of trawling are still being investigated since the plumes were first noticed in satellite imagery in 2008. But a new study in Nature suggests that it churns up and releases carbon that’s been locked up inside sediment at the bottom of the ocean — between about 600 million and 1,500 million tons, according to the study’s initial estimates, which is about the same amount as the global aviation industry.

“It had been thought before that there’s more carbon stored in soils than there is in sediment in the ocean,” Boris Worm, co-author of the paper and professor of marine conservation biology at Dalhousie University in Canada, told Mongabay in an interview. “But we found that the ocean was qualitatively more important. So then it becomes an important question of whether that carbon is safe, or whether there is a danger that it gets reintroduced into the environment.”

The paper, which was spearheaded by Enric Sala of National Geographic and the Pristine Seas project, not only points out the issue of trawling emitting carbon — it also offers a solution, or rather, a range of solutions. It suggests that by meticulously choosing places in the global ocean to set up as marine protected areas (MPAs), nations can not only reduce carbon emissions, but also safeguard marine biodiversity and maintain fishing efforts.

When MPAs are set up with these three objectives in mind, ocean protection can have “triple benefits” that go hand in hand with each other, the study says. For instance, an MPA that bans fishing and other extractive activities would naturally help marine life and reduce carbon emissions, but it could also boost fishing yields in adjacent areas. There are a number of scientific studies that support this claim that MPAs increase fish stocks.

“When we protect a certain place, that means it has an effect on areas around it,” Worm said. “It almost has a halo of positive influence that extends beyond its boundaries and this is well documented for marine protected areas worldwide that once they’re protected for a few years, you get this spillover of commercially valuable fish into other areas, either as larvae or adults.”

“It’s possible to make a relatively small reforms to gain advantages on many aspects, and it’s completely [counter] to the general idea that … if we protect biodiversity, we will have decreasing advantages for fisheries,” co-author Arnaud Auber, a research scientist at the French Research Institute for Exploitation of the Sea (IFREMER by its French acronym), told Mongabay in an interview. “We can show that protecting biodiversity is a very nice aspect, both for both for biodiversity and also for fisheries.”

‘A tool to be smarter’

This new study contributes to the ongoing dialogue about how to protect 30% of the world’s oceans by 2030 — a move supported by more than 75 countries as well as many conservation groups, scientists, and key voices among Indigenous and local communities, says Masha Kalinina, a senior officer at the international conservation unit at the Pew Charitable Trusts.

“We all hope that the 30 by 30 target for the ocean will be adopted at the 15th Conference of the Parties to the CBD [Convention on Biological Diversity] in October of this year, when it hopefully takes place in Kunming, China,” Kalinina, who was not involved in the new study, told Mongabay in an email. “Whether this meeting will be possible in-person and what type of hybrid or virtual options are available remains to be seen. Regardless, we cannot afford delaying action on this goal any further.”

A previous goal of protecting 10% of the ocean by 2020, as set out by the CBD’s Aichi Target 11 was ultimately not met. Right now, only about 7% of the global ocean has been designated or proposed as MPAs, and about 2.7% has full protection.

In the last two years, at least two other reports have emerged to recommend how the world can achieve 30% protection of the ocean by 2030. This includes a 2019 report from researchers at the University of Oxford and the University of York, and a 2020 report published in Marine Policy led by researchers at the University of California, Santa Barbara (UCSB). However, both reports focused primarily on protecting the high seas — international waters beyond various nations’ economic exclusion zones (EEZs) — in line with the treaty being developed by the United Nations to protect the high seas.

The new paper in Nature, by contrast, looks at all parts of the ocean — not only the high seas, but also coastal regions within nations’ EEZs. In fact, many of the priority areas highlighted in the study concentrate on coastal areas rather than the open ocean.

Douglas McCauley, co-author of the Marine Policy report and professor of ocean science at UCSB, says one of the novel features of the new study is its attempt to show how marine protection not only benefits biodiversity, but can also aid the fishing industry and help fight climate change through carbon storage.

“Most 30 X 30 roadmaps focus on the currency only of biodiversity and consider how we can use MPAs to avoid loss of marine wildlife,” McCauley told Mongabay in an email. “I think it is useful and important to draw into these conversations discussions of how we can use MPAs to also fight food insecurity and slow climate change.”

He added that the study’s attempt to conceptualize the carbon footprint of trawling — as well as the future threat of deep-sea mining — is a “really interesting facet.”

“As the authors state their calculations represent a ‘preliminary best estimate’ of how much CO2 is released by these activities,” he said. He suggested that these first estimates set a benchmark for future research “that will help us better understand how human industry in the ocean affects marine carbon storage. These are going to be critically important answers to have in hand.”

“We’re not prescribing anything,” Worm said. “We’re trying to give people a tool to be smarter about where to place areas given multiple objectives, again, that are not in conflict, but that are in support of each other.”

“The study provides a map that shows the [overlap] between different areas around the world to protect in order to meet these objectives,” Auber said. “In the end we have a map that can be used as a guide for stakeholders.”

‘Investment into a sustainable future’

A key step in achieving sustainability in the ocean is to step up protection of existing MPAs, according to the study. For example, Europe already has a wide network of more than 3,000 MPAs, but as a recent report from the European Court of Auditors (ECA) found, few of these MPAs offered full protection and most failed to protect biodiversity.

“A lot of these areas are actually in great places for biodiversity for food for carbon, we just need to actually protect them to reap the benefits,” Worm said. “The first goal would be to strengthen the protection of those areas [and] there are tens of thousands of protected areas around the world that could be strengthened, and then strategically add new areas for maximum benefits, especially those triple benefit areas that we’re describing.”

The researchers suggest their study could be used to inform both national and international targets, and that the study “lends credence” to the 30×30 target that may be adopted at the upcoming Conference of the Parties (COP15) of the CBD, which may take place later this year. They also suggest that achieving ocean sustainability would require a great deal of international cooperation.

McCauley says that “not enough conservation efforts today are underwritten by the kind of international cooperation” promoted in the paper.

“It is more the norm that villages, provinces, and nations choose places to protect that sync with their own local goals,” he says. “As a result, the establishment of marine protected areas today happens rather willy nilly. I think it is exciting to derive a sense of how much more bang for our conservation buck we would gain if we all communicated and strategized more effectively. It seems clear in this analysis that there is much to gain by looking at this bigger picture. I think, however, there are some important questions to confront ahead about what kind of structures we would need to invent to foster this kind of cooperation.”

But Worm says he sees this kind of international cooperation as very possible.

“I think it’s very, very doable, and a lot of the pieces are in place, but I think it needed this incredibly comprehensive piece of information to help with the planning and really get the best return on our investment,” he said. “I really see protected areas as an investment into a sustainable future.” 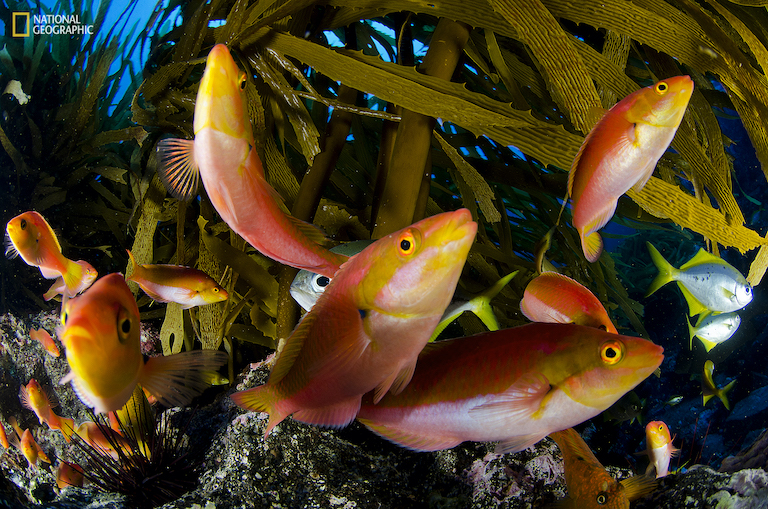 Banner image caption: Wildlife off the coast of the Galapagos Islands, Ecuador, in 2015. Image by Enric Sala.

Editor’s note: the original title of this piece was “Ocean protection done right can kill three fish with one stone, study says”. It was changed to the current title shortly after publication.