ANTANANARIVO, Madagascar — As drought pushes more than 1 million people toward famine in southern Madagascar, violent winds have been veiling the sky with dust and sand, at times blotting out the sun.

The natural phenomenon is known locally as a tiomena: tio means “wind” in Malagasy and mena means “red.” It is complicating an already precarious situation. The U.N.’s World Food Programme has urgently requested $35 million to fund lifesaving food and cash distributions and malnutrition treatment programs. And on Jan. 18, the U.N. and the Malagasy government jointly launched a “flash appeal” for $75.9 million in international aid to improve access to food, water, and medical care for the 1.27 million people affected. People are fleeing the area and the government is struggling to cope with waves of migration reported as of early January.

“In the area of Tanandava within Amboasary Atsimo district, all the residents have abandoned their village,” Tsimanova Nazaire Paubert, an entrepreneur and student of political anthropology based in Ambovombe, the capital of the Androy region that is the epicenter of the drought and winds, told Mongabay. “All their houses were buried in the sand raised by the tiomena.”

Tiomenas can occur almost anywhere in Madagascar when the wind blows intensely in arid, dusty areas. As a particularly dusty area with poor vegetation cover that is in the midst of a persistent drought, the deep south is especially prone to tiomenas, according to Rivo Randrianarison, a weather forecast specialist at the national meteorology service in the capital, Antananarivo.

Tiomenas resemble small versions of the massive dust or sand storms observed in the Sahara Desert or the Middle East, he said. Climate change could be a factor, he said, as soils have become drier in the area as temperatures have risen. Add deforestation, he said, and “the chances of more tiomenas occurring obviously increases accordingly.”

Randrianarison said tiomenas have always occurred, but in the past they would have affected a more limited area and, in the days before social media, received less attention.

According to Mahatante Tsimanaoraty Paubert, Tsimanova’s brother and a climate expert at the University of Toliara, the trade wind that can bring tiomenas in southern Madagascar used to blow from mid-May to mid-October. Now, however, it blows almost all year long. The current tiomena conditions started on Oct. 29, just as they would typically have been ending, and have continued until now, he said — despite some welcome rain in the region on Jan. 19.

The tiomena events are affecting an area around 200 kilometers (124 miles) wide between the Mandrare River and the town of Beloha Androy. The meteorology service has recorded at least five tiomenas so far in 2021, but the figure is likely incomplete because there are no observatory networks in the affected areas, according to Randrianarison.

The lack of observatories also means there’s little historical data that could indicate whether tiomenas are becoming more frequent or more destructive, as Randrianarison and many local people suspect.

Elders recall a particularly destructive tiomena in 1987 that lasted five days straight, Tsimanova, the anthropology student, said. “The current ones are worse,” he added.

Southern Madagascar entered the present period of desiccation about 3,000 years ago, according to research. It now appears to be trapped in a deteriorating cycle of drought, poverty, deforestation and erosion, with increasingly frequent tiomenas exacerbating the already uncertain existence there. “Tiomenas would not happen if people hadn’t massively deforested … the cactus forests and uprooted sisals for animal food,” Tsimanova said. 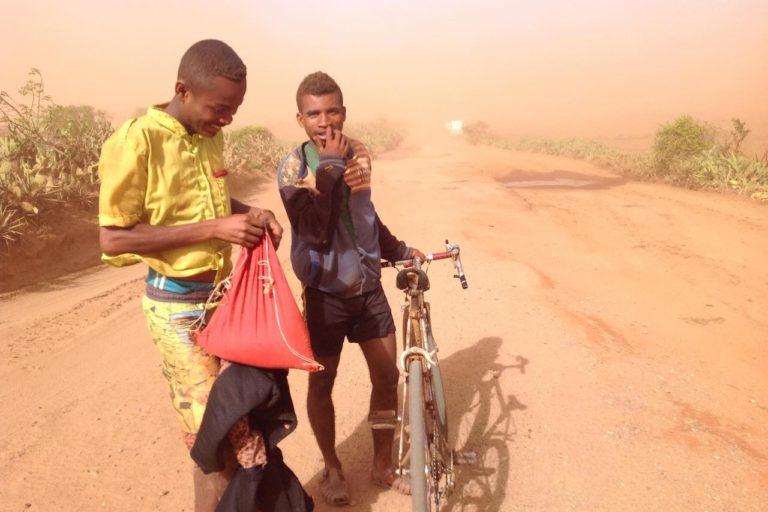 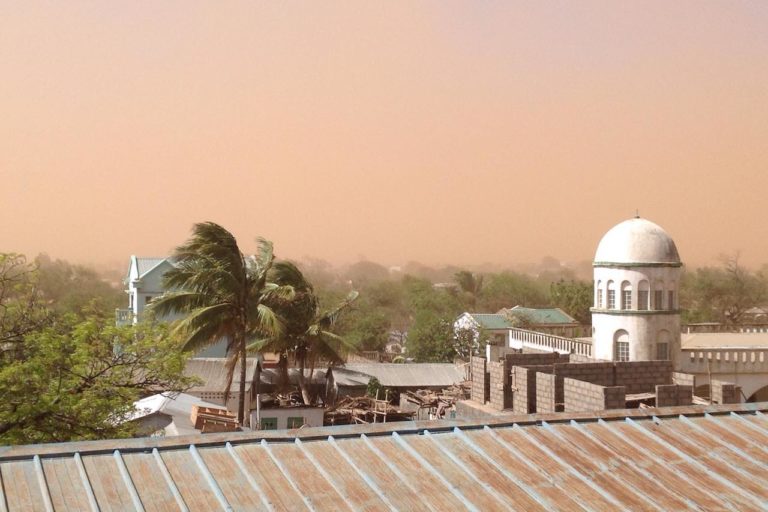 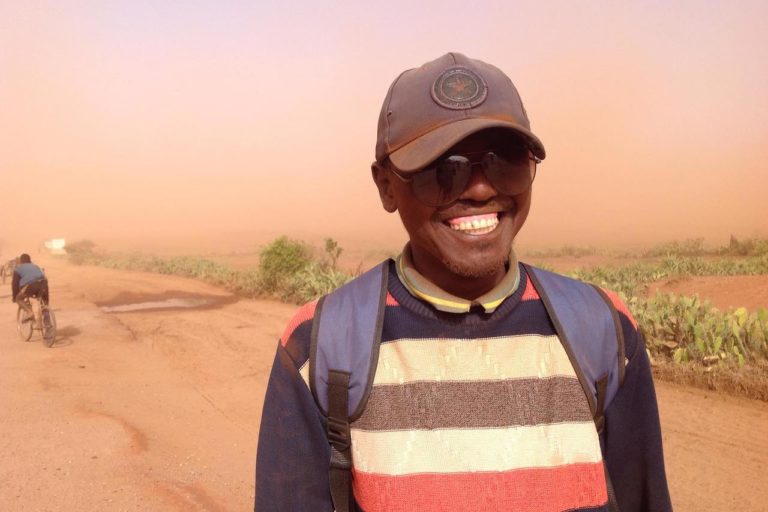 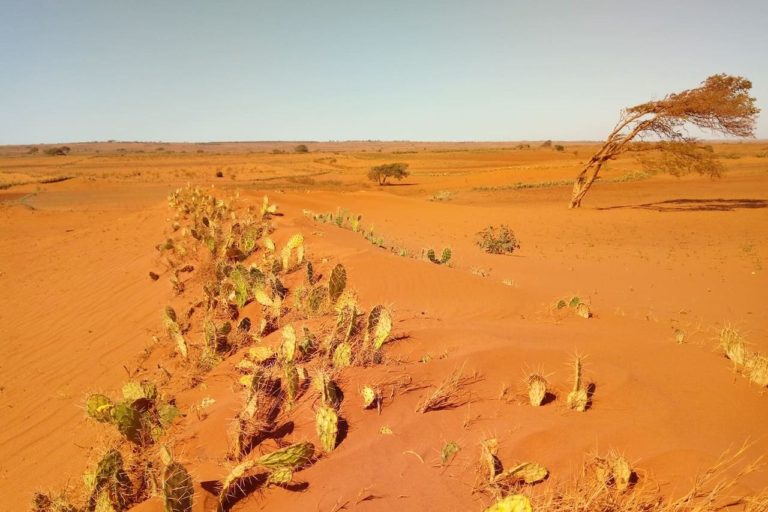 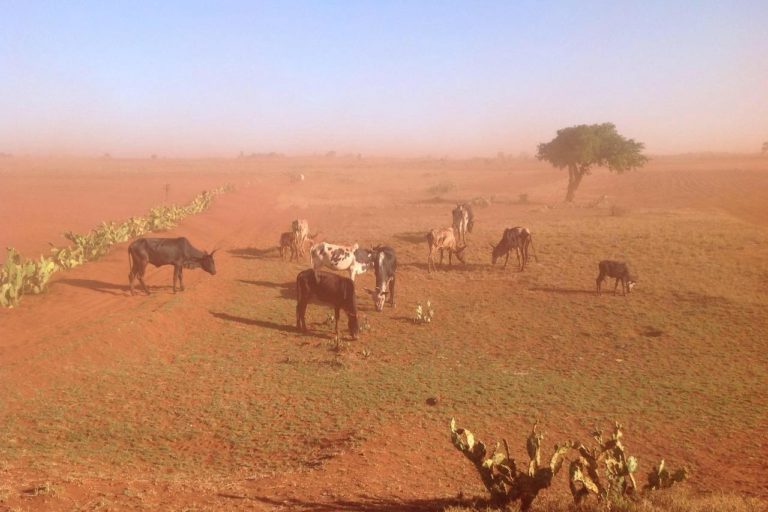 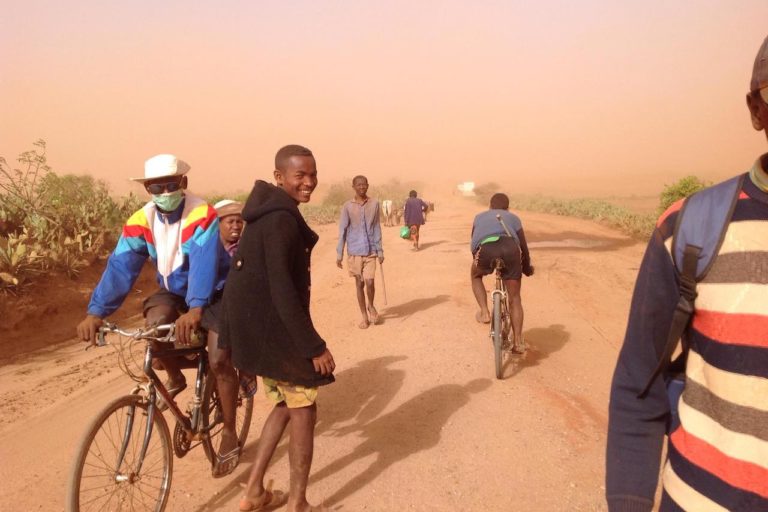 “This wind limits and disturbs the livelihood of the southern people,” Mahatante said. In the cities, the tiomenas slow everything down: all business, teaching and administrative work, he said.

But in the countryside, the situation is more worrying. The winds create dunes and pile sand on farmlands, forests, villages and cemeteries. “Fishermen can’t go out and farms face a failure of crops as the wind dries soils quickly and the particles it carries cover plants’ leaves compromise photosynthesis.”

People have been unable to grow crops since October, and the last harvest took place back in June.

“To survive, families are eating tamarind fruit mixed with clay,” Moumini Ouedraogo, the WFP representative in Madagascar, said in a Jan. 12 press release. “We can’t face another year like this. With no rain and a poor harvest, people will face starvation. No one should have to live like this.”

Even the cactus, which rural people rely on for food during drought, have dried up, and dust or sand has destroyed the few wells that exist. Water is scarce and the price has gone up: 20 liters (5.3 gallons) costs 2,000 ariary, or $0.52 — if this luxury is even available.

Illness on the wind

As if hunger weren’t enough, tiomenas carry additional public health risks, according to Tsivahiny Paubert, a medical doctor and chief of the regional hospital in Ambovombe. (The three Pauberts mentioned in this story — Tsimanova Nazaire Paubert, Mahatante Tsimanaoraty Paubert and Tsivahiny Paubert — are brothers.)

As direct consequences, Tsivahiny says, more and more children under the age of 5 are suffering from fever, respiratory infections, diarrhea, and eye problems. “Toilet use rate is low in the south,” Tsivahiny said. “People are used to defecating in the wild. When tiomena comes, the blowing dust or sand carries human excrement with microbes.”

Tiomenas can cause a slow death. Tsivahiny said his department has noticed increased cases of depression and cardiovascular problems such as strokes because of the distressing living conditions. “Even 25-year-olds are affected today. It’s a new trend,” he said.

He attributes a number of other poor health effects to the tiomenas and drought. With condoms the last thing on anyone’s mind, he said there has been an “explosion” of HIV/AIDS infections. His service has been recording two or three new cases weekly, including among children, compared with two per month previously. Prenatal consultations have declined significantly and poisonings have shot up due to reliance on medicinal plants among the desperately poor. And he’s noticed a widespread decline in social cohesion resulting in increased fragility and vulnerability among the local population.

“We will have orphans from HIV/AIDS beyond the deaths attributable to famine,” Tsivahiny said.

As dire as the situation in southern Madagascar may seem, experts insist it’s possible to turn it around.

“Tiomena is a natural disaster which could be put under control,” said Tsibara Mbohoahy, an environmental expert at the University of Toliara and head of the Androy Regional University Center in Ambovombe. “For the resilience of the community, water is the unique solution to eradicate famine and protect soils from erosion. It is a socioeconomic, health and environmental solution all at once.”

The U.N.’s recent flash appeal includes plans not only to truck in water to meet immediate needs but to rehabilitate and expand the region’s existing system to supply water for human and animal consumption and for agriculture, including the possible addition of desalination units.

For his part, Mahatante advocates massive tree planting in the region. Trees would serve as a wind break, protect soils from erosion and create more humidity. But such plantings are “impossible without water,” he said.

Nevertheless, on Jan. 19, the government launched the national tree-planting campaign for the year in Tolagnaro, the capital of the Anosy region, just east of Androy, and four days later, it launched the Androy regional campaign in the commune of Ankilivalo Ambovombe. There people planted 30,000 fatiolitse trees (Alluaudia montagnacii), a species endemic to the country’s spiny forests, toward a goal of reforesting 100 hectares (247 acres) in the area this year. Madagascar aims to plant trees on 75,000 hectares (185,000 acres) throughout the country in 2021, against 40,000 hectares (99,000 acres) in 2020.

Banner image: Children amid a tiomena in the Ambovombe district of Androy region in southern Madagascar. Image by Tsimanova Nazaire Paubert.