Brazil is not only the world’s champion in pesticides consumption (more than US$10 billion annually), but also the largest buyer of Highly Hazardous Pesticides (HHPs) — a United Nations designation for agrochemicals containing active ingredients with extremely acute toxicity, persisting in the environment and in organisms, and having chronic negative effects on human health and the environment, even with very low levels of exposure.

That is the conclusion of an investigation by Unearthed, an independent journalistic organization funded by Greenpeace UK, in partnership with the Swiss NGO Public Eye.

The study team cross referenced data for $23.3 billion in pesticide sales to 43 countries in 2018 (about 40% of the global market) along with the Pesticide Action Network (PAN) list of HHPs. The in-depth data set was broken down by active ingredient to ascertain the value and percentage of each sale attributable to highly hazardous pesticides.

Analysis showed that 42.4% of total sales ($ 9.9 billion) were in HHPs. Of that group of highly hazardous pesticides, Brazil accounted for more than a fifth (22.2%), totaling $2.2 billion.

In addition, the world’s top five pesticide manufacturers — Syngenta (Switzerland), Bayer and BASF (both headquartered in Germany), and Corteva and FMC (both in the United States) — accounted for 80% of all pesticide sales to Brazil; 72% of these sales were HHPs ($1.6 billion). These companies, together with Sumitomo Chemical, combine their political clout as CropLife International, an international Brussels-based pesticide industry trade association and lobbying group. 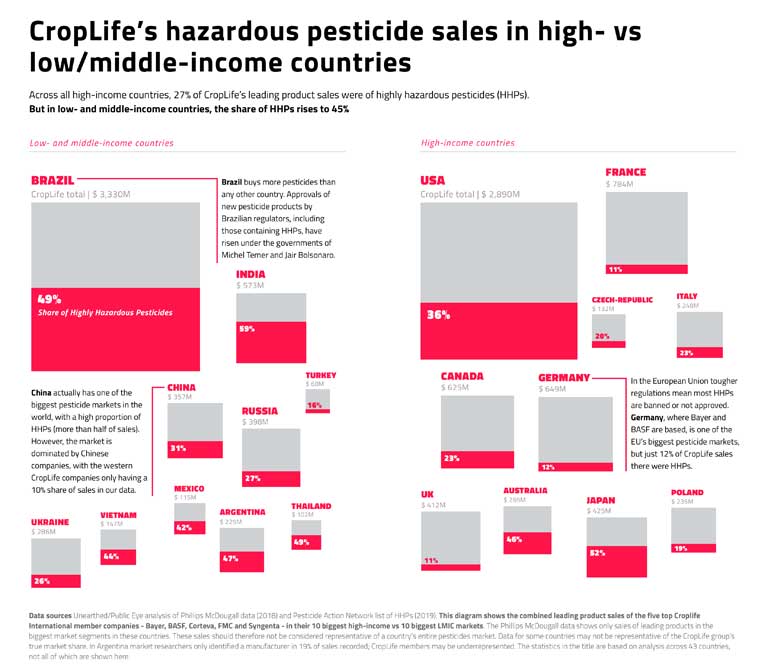 The Unearthed/Public Eye investigation also found that the intensity of use of potentially hazardous pesticides seen in Brazil is replicated in other low and middle income nations. While HHPs of the five pesticide giants accounted on average for just 27% of sales to high income nations, that share rose to 45% in low income countries.*

Comparing individual nations, Brazil’s HHP purchases represented 49% of total pesticide sales, the same as Thailand, while India came in at first place with 59%, with Argentina and Vietnam respectively at 47% and 44%. Those figures contrast sharply with high income nations: Germany, for instance, saw only 12% of CropLife member company sales coming from HHPs, while both France and the United Kingdom purchased only 11% HHPs, with Italy and Canada at 23% each. The high income countries that made the average HHP consumption rise in that group were the U.S., with 36%, and Australia and Japan, with 46% and 52%.

Interestingly, several HHPs sold in Brazil are prohibited for use in their countries of origin. One example is the herbicide paraquat, banned for use in Switzerland and throughout Europe since 2007. It is associated with cases of cancer, Parkinson’s disease, pulmonary fibrosis and genetic mutations.

In September 2017, Anvisa, Brazil’s health protection agency, banned the use of paraquat, but two months later backtracked on that decision, responding to pressure from the ruralist agribusiness lobby as well as Syngenta’s industry lobby. After Anvisa’s prohibition, the Swiss manufacturer and the Swiss-Brazilian Chamber of Commerce paid for a trip made by Brazilian ruralists to Syngenta’s product development laboratory in the city of Stein.

Contacted by Mongabay, CropLife International, through its media representative, explained the wide disparity between developed and developing world HHP use this way: “Our members are serving farmers around the world, from UK to Uganda, from Brazil to Bangladesh, [and they have] different crops, pests, and climates. None of the countries and their farming conditions are the same. So, it makes sense that the pesticides to address those challenges are often different, which means that different pesticide products are available. In other words, different products will be available for European farmers vs. farmers in East Africa, where they are currently combatting locust infestations.”

However, environmental NGOs have a very a different view. Juman Kubba, policy advisor at Greenpeace UK, responded to CropLife’s explanation: “Make no mistake that if the European market was open for [the companies] to sell their carcinogenic and bee-killing chemicals, they would. Far from serving differing needs around the world, CropLife and its members seek only to exploit and profit from differing rules and regulations on toxic pesticides. These dangerous chemicals have no place in a healthy food system or a healthy environment and governments must ban them worldwide.” Pesticide regulations, as a rule, are far weaker in developing nations than in developed countries. 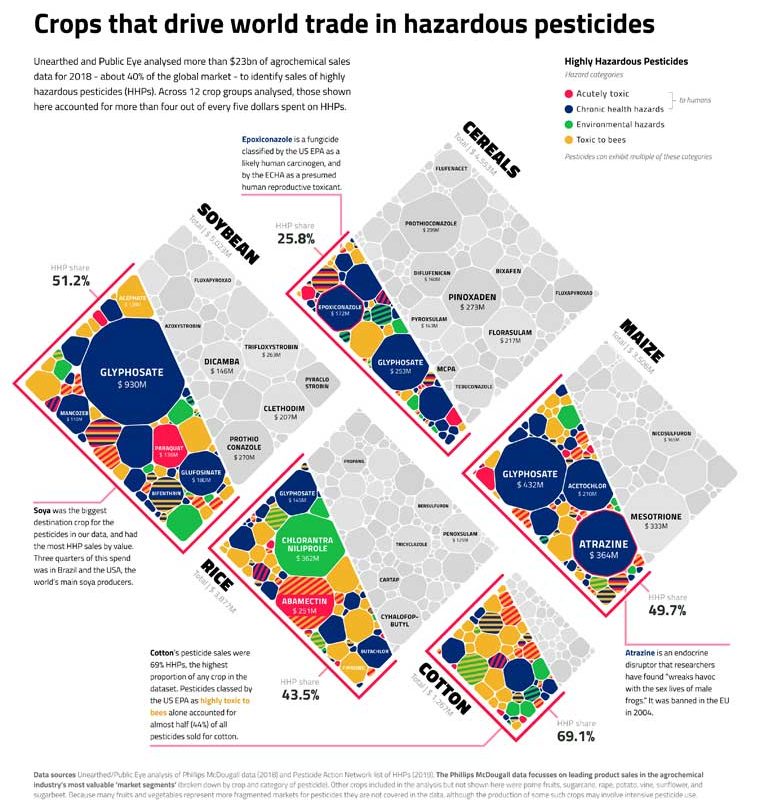 Pesticide sales aren’t showing any sign of slowing, despite scientists’ concern over their use created by the so-called planet-wide “insect apocalypse.” Global pesticide sales rose 6% in 2018 to $57.5 billion, according to Agrow Agribusiness, an industry intelligence group.

Not coincidentally, the regions with the greatest sales increases were typically those with the least environmental regulation: the Asia Pacific region, which saw a 7.2% growth rate (sales of $ 17.4 billion), and Latin America with a 11.1% growth rate ($14.1 billion).

In contrast, Western Europe saw sales fall 3% (to $12 billion). “The regional market split between a strongly growing Eastern Europe and a declining Western half. Major declines [in pesticide sales] are estimated for France, Germany and the UK, where hot, dry weather in spring and summer reduced disease and pest pressure and [resulted in] low demand,” said the report.

However, it is expected that HHP sales will continue being brisk in Brazil. In 2019, the government of President Jair Bolsonaro approved the registration of 474 new pesticides — the highest number in 14 years. Pesticide imports to Brazil also broke an all-time record, with almost 335,000 tons of pesticides purchased in 2019, an increase of 16% compared to 2018.

Last July, Anvisa also changed its authorization process. The new legal framework for pesticides now considers only the risk of death when classifying toxicity, not other medical harm that could happen. As a result, many products that were classified as extremely toxic in the past can now be assessed as moderately or slightly toxic.

It seems likely that under the Bolsonaro government, new pesticide use records will be forthcoming. A Ministry of Agriculture ordinance published last month mandated the automatic authorization of newly proposed pesticides if a product is not evaluated within 60 days of its registration request — a fast track mechanism sure to up the number of HHPs and other pesticides being approved, while potentially putting safety at greater risk.

Brazil’s hyper-expansion of toxic pesticide use comes at a time when the nation’s citizens are increasingly alarmed about pesticide poisoning, while evidence of harm to bees, tapirs and other wildlife grows.

Correction: This story originally reported erroneously that ” HHPs of the five pesticide giants accounted on average for 45% of sales to high income nations, that share dropped to just 27% in low income countries.” The actual statistics are just the opposite; the stats have been corrected and updated in the text.