I understand the desire to correct misinformation that proliferates in the aftermath of breaking news events. And I understand the frustration of sensationalist headlines that mislead readers. But columnist Michael Shellenberger’s attempt in Forbes to correct the record on fires burning in the Brazilian Amazon was sloppy at best, and deceiving at worst.

Shellenberger is right on several points, including the poor choice of “Lungs of the Earth” as a moniker for the Amazon rainforest, the fact that both deforestation and fires have been substantially higher in the recent past, the widespread use by the media of old or irrelevant photos to depict the current fires, the need to meaningfully engage ranchers and farmers in Amazon preservation, and the under-appreciation of the impact of sub-canopy fires.

But he’s wrong about some other important points. These are listed and refuted below.

What about The New York Times claim that “If enough rain forest is lost and can’t be restored, the area will become savanna, which doesn’t store as much carbon, meaning a reduction in the planet’s ‘lung capacity’”?

Shellenberger’s hang up on oxygen here misleads and misdirects the reader. Scientists, including Dan Nepstad who is quoted extensively in the Forbes piece, have indeed warned that large-scale loss of tree cover in the Amazon rainforest could tip the ecosystem toward a drier, savanna-like ecosystem similar to the adjacent Cerrado. This new ecosystem would store vastly less carbon than a rainforest, increasing emissions and potentially escalating the rate of global climate change.

Importantly, some scientists argue that a vegetation transition of this magnitude would disrupt local transpiration and could even shift the Inter Tropical Convergence Zone affecting regional precipitation patterns and potentially impacting hydropower output, urban water supplies and agriculture production across Brazil—even to the point of threatening the Latin American nation’s position as a global agribusiness powerhouse, potentially endangering the food supply to millions in the EU and China who rely on Brazil for meat, soy and other vital commodities.

One of Brazil’s leading environmental journalists agrees that media coverage of the fires has been misleading. “It was under [Workers Party President] Lula and [Environment Secretary] Marina Silva (2003-2008) that Brazil had the highest incidence of burning,” Leonardo Coutinho told me over email. “But neither Lula nor Marina was accused of putting the Amazon at risk.”

Shellenberger is quoting Leonardo Coutinho here, but it is certainly not true that the world turned a blind eye to deforestation and burning under the Lula Presidency. A simple search of any news archive will produce reams of stories reporting on the issue, public outrage over Amazon deforestation at the time, as well as Nepstad’s studies warning of an Amazon forest to savanna tipping point. And in fact Marina Silva very publicly resigned as Environment Minister in May 2008, a story which garnered significant press attention. Shellenberger failed to do his due diligence here.

Reached by Mongabay, Nepstad added that it was international attention that led the Lula government to pursue its successful deforestation reduction program, which resulted in massive emissions reductions that went largely unrewarded by the rest of the world.

“The reason President Lula prioritized the Amazon was the very high level of international outrage expressed through media coverage of the high deforestation rates in 2002-2004,” Nepstad told Mongabay.

Amazon forest fires are hidden by the tree canopy and only increase during drought years.

While sub-canopy fires are far more pervasive in drought years, especially during strong El Niño events, Amazon forest fires do not only increase in drought years as the burning this season—which isn’t historically dry—demonstrates. Overlaying satellite data from NASA with recent tree cover loss detected by Global Forest Watch’s GLAD system shows that fires are burning in close proximity to rainforests in the Amazon. Given that fires are burning hotter than normal this year, it’s almost certain that sub-canopy fires are burning from agricultural areas and slashed forests into rainforests. We’ll know for sure once the smoke clears and scientists are able to assess the situation on the ground. Shellenberger is wrong here.

What increased by 7% in 2019 are the fires of dry scrub and trees cut down for cattle ranching as a strategy to gain ownership of land.

There is no evidence to support Shellenberger’s contention here that dry scrub and “trees cut down for cattle ranching” represent 100 percent of the increase in fires in 2019.

Half of the Amazon is protected against deforestation under federal law.

Incursions into protected areas and indigenous territories as well as the weakening and widespread disregard of the Forest Code means that while half the Amazon may be protected on paper, it is not protected in practice. Invasions of conserved areas, illegal logging and the terrorizing of rural populations by loggers, miners and land grabbers under past governments, and especially under the government of Jair Bolsonaro have been regularly reported.

For example, Jamanxim National Forest lost 3 percent of its forest cover — 44,800 hectares (110,700 acres) — in May alone. Meanwhile, the much heralded Surui Paiter indigenous carbon offset project in Rondônia has been invaded by illegal miners, forcing the tribe to suspend the initiative.

And just 3% of the Amazon is suitable for soy farming.

The biggest driver of deforestation in the Brazilian Amazon is cattle ranching, not soy farming.

But even so, Nepstad said “3 percent of the forests outside of protected areas are suitable for soy cultivation”. That’s far different than the entire Amazon. 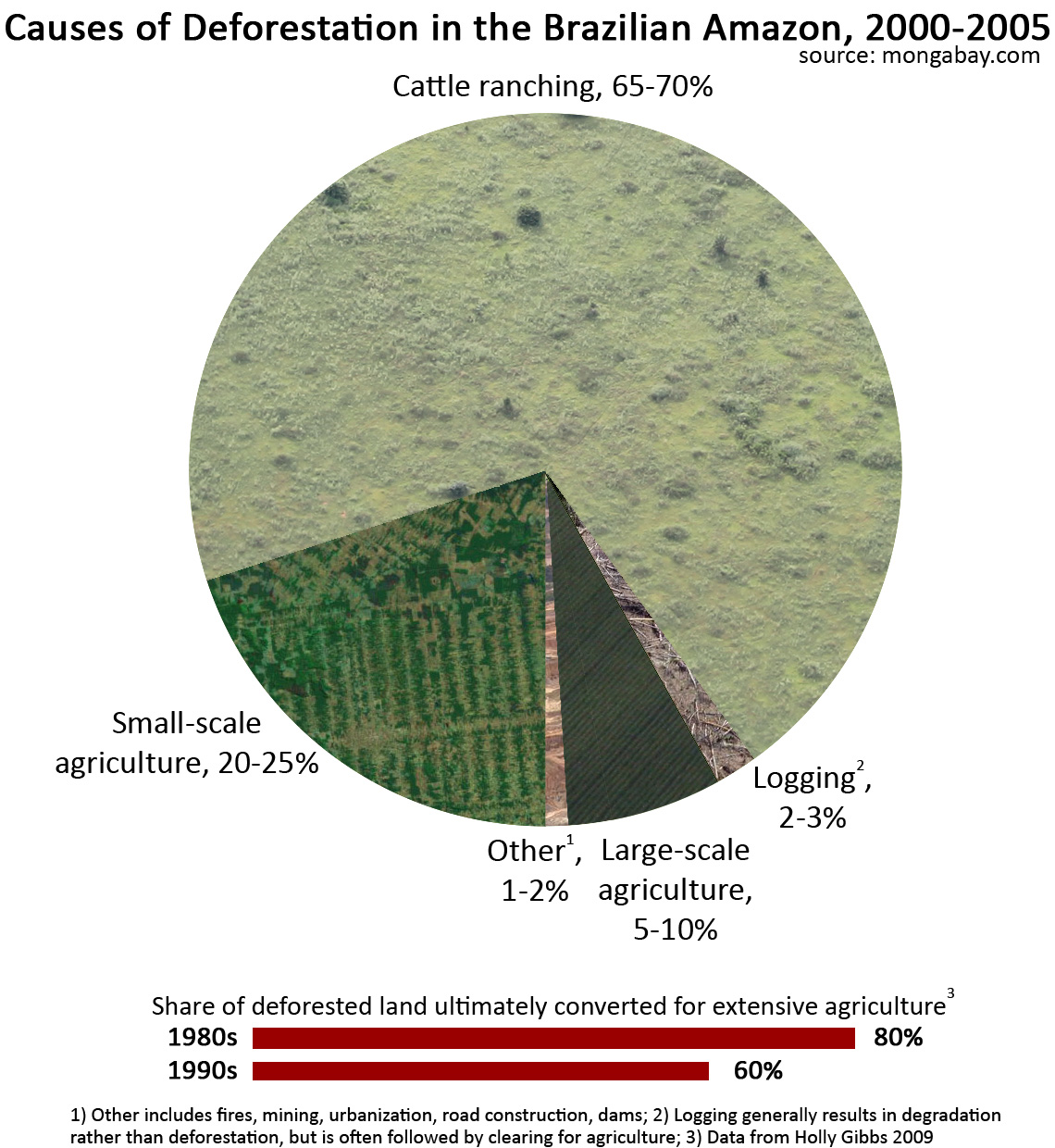 Both Nepstad and Coutinho say the real threat is from accidental forest fires in drought years, which climate change could worsen.

Shellenberger is misleading here. “Accidental fire” makes it sound like fires aren’t intentionally being set, but that’s not the case.

Nepstad: “Virtually all fires in the Amazon are started by people. They often escape their intended boundaries, into neighboring forests.” There is nothing accidental about Amazon deforestation via the use of fire as a tool. Importantly, land speculators also regularly employ fire intentionally in the Brazilian Amazon as a primary tool of illegal deforestation, as preparation for illicit land sales at highly inflated prices to cattlemen and farmers.

Today, 18 – 20% of the Amazon forest remains at risk of being deforested.

There is absolutely no evidence to support Shellenberger’s claim here.

Nepstad said Shellenberger could be referencing land in the Brazilian Amazon that is still undesignated.

“About one fifth of the Amazon forest is still undesignated—it is “up for grabs”, terra devoluta,” he said. “This is certainly not the only forest that is under threat of deforestation or fire.”

In his eagerness to critique the media and lambast celebrities, Shellenberger effectively dismisses the broader concerns over recent developments in the Amazon. The fear is that Brazil’s past progress in reducing deforestation and fires is being reversed as a result of the Bolsonaro administration’s undercutting of the regulatory framework, the institutions, the civil society groups, and the science that enabled the country to achieve those outcomes.

This reversal also comes as a warming planet makes the world’s largest rainforest more vulnerable to drought and fire. A return to the peak deforestation of the mid-1990s through mid-2000s would be even more damaging today given the greater frequency of drought and elevated temperatures in the Amazon as well as the higher concentrations of CO2 in the atmosphere, which gives us even less time to curb emissions.

And while Nepstad’s comments in Shellenberger’s piece seemed to also be dismissive of the global attention currently paid to the situation in Brazil, the scientist reiterated that now is a very important moment for the Amazon. In his own words:

“Fire is a huge problem in the Amazon region. Large-scale fires in standing forests during extreme dry periods are the biggest threat to these forests in a warming world. Once burned, forests become more vulnerable to further burning. And as deforestation and repeated fire reduce forest cover, rainfall is inhibited.

“In 2019 this problem is getting the attention it deserves. The number of fires and the amount of smoke they are producing has increased, probably because of the large number of felled forests that have been dried and are now burning. The good news is that there is no evidence that the area of standing forests catching fire is significantly greater than the area of forest that typically burns this time of year. It is still early, however. The bad news is that weather forecasts indicate that the dry season the Amazon is currently in could become quite severe. Forests could begin to burn over large areas.

“Brazil has a rare opportunity to focus on fire now and design some systemic solutions to fire, including short-term and long-term components, as described in the blog. These solutions start on the ground—there is enormous expertise in fire prevention and fire control among the farmers, communities, fire brigades and local governments of the Amazon. In the long-term, a shift to more tree crops, agroforestry systems, aquaculture, and more intensive cattle production could greatly reduce the use of fire and greater increase investments in fire control.”

Andrew Revkin, the former New York Times reporter and current Founding Director of the Initiative on Communication & Sustainability at The Earth Institute at Columbia University who was also quoted in Shellenberger’s column, agreed that the current reporting around the Amazon fires by mainstream media has often been problematic, failing to distill important nuances. But he told Mongabay that he wasn’t thrilled with Shellenberger’s framing.

“I don’t endorse the framing of the article and absolutely don’t agree with the caricatured distillation of the situation,” he wrote via email. “Amazon threats and solutions are as varied and widespread as the basin itself. Simple characterizations of catastrophe — as in a lot of media coverage — miss substantial opportunities to slow loss and even turn the tide toward restoration and sustainability.”

“As with doomism around climate change, they can prompt paralysis and disengagement when the opposite is needed. But simplistic interpretations of the motives of those challenging Brazil’s current leadership are as unhelpful.”