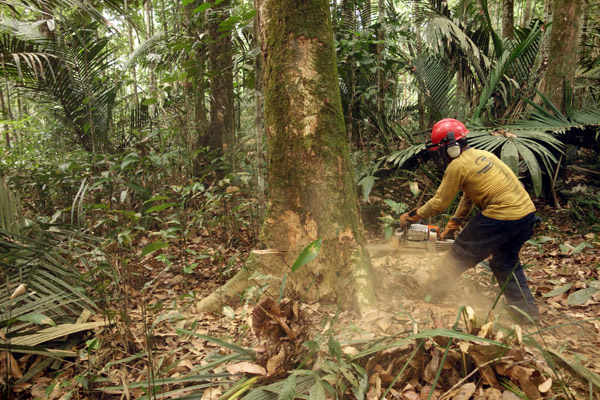 The research, published by ten researchers from 11 institutions, is based on field data from some 87,000 plant and soil samples across 225 sites covering three million hectares in Santarém and Paragominas in the state of Pará, which accounts for the bulk of timber production in the Brazilian Amazon. It found stark differences in carbon storage between primary forests, selectively logged forests, logged and burned forests, and regrowing or secondary forests. 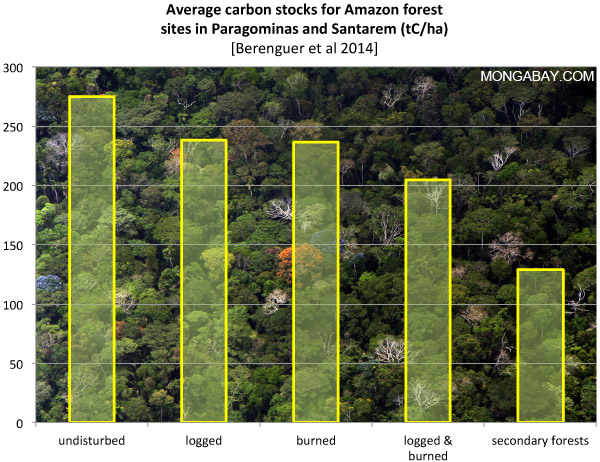 The study confirmed that selective logging is playing a key role in diminishing carbon stocks across the world’s largest rainforest. Logging both removes carbon-dense trees from the landscape and leaves surviving areas more vulnerable to edge effects and drying, heightening the risk of fires that further degrade the forest. Ultimately logging and fire can dramatically alter a forest, transitioning it away from the cathedral-like structure of a typical rainforest toward dry scrub dominated by vines and lianas.

Given the scale of logging operations in Brazil, the study indicates that timber harvesting in the Amazon is a significant source of carbon loss.

“We found that selective logging and ground fires in the Brazilian Amazon account for an additional 540 million metric tons of carbon being annually lost in the region, nearly half of the annual carbon loss from deforestation,” lead author Erika Berenguer of Lancaster University told mongabay.com. “The impacts of logging and wildfires, and the resultant carbon loss, have been grossly underestimated and overlooked to date by the Brazilian government.”

The findings emphasize the importance of accounting for logging and fire in initiatives that aim to slow climate change, like the Reducing Emissions from Deforestation and forest Degradation (REDD+) program, says Berenguer.

“Forest degradation needs to be incorporated in the designing phase of REDD+ projects by mapping out the risks of human-driven disturbance a project might face, together with mechanisms to avoid the onset of such disturbances,” she said. “In addition, REDD+ projects need to ensure they carry out periodic, reliable and replicable monitoring of forest degradation, just as it is done with deforestation. At the moment, this hasn’t been widely seen in the Amazon.”

In Brazil, monitoring of forest degradation is primarily conducted by Imazon, a Brazilian NGO, which releases a monthly report based on satellite data analysis. Imazon’s report estimates total deforestation and degradation across the Amazon, along with associated emissions. Outside of Brazil, but still in the Amazon, agencies in Colombia and Peru use a system called CLASlite for monitoring degradation. 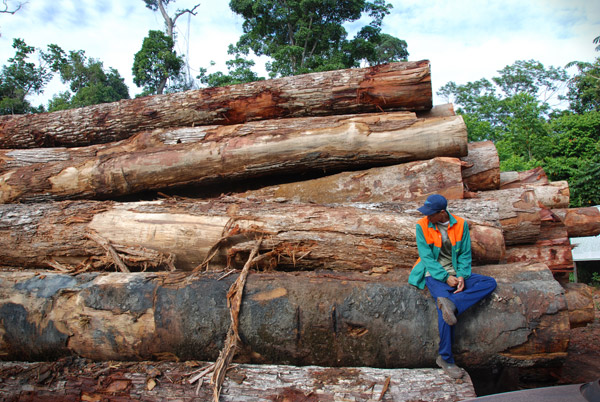 Amazon logs. While there are a wide range of REDD+ projects, some of the more controversial involve selective logging based on the premise that less damaging forms of timber extraction represent a net savings of emissions relative to conventional logging. But a recent study in Indonesia found that in practice, reduced impact logging may not actually cut emissions, lending support to the argument that subsidies for logging in primary forests may not be an effective use of REDD+ funds. Photo by co-author Jos Barlow

The researchers note that while monitoring platforms are constantly improving, on-the-ground field work is still important.

“Ground surveys of disturbance signals are therefore invaluable tools for providing basic information on the past disturbance regime in a given area of forest and can help decision makers to evaluate areas more likely to maintain carbon stocks in the long term,” they write, adding that boosting protection of old-growth forests should be a conservation priority.

“Investments in avoiding further disturbance (e.g. fire breaks) in low-disturbed forests can avoid structural shifts and ensure permanence of carbon in human-modified forests, hence constituting a great conservation opportunity,” they write. “The continuous neglect of the widespread impacts of forest degradation will result in additional, and unaccounted, greenhouse gases emissions from tropical countries, with consequent impacts on the world’s climate.”