Tuna-fishing nations hammered out a temporary plan to stop overfishing of Indian Ocean yellowfin tuna (Thunnus albacares) at a June meeting, but fatal weaknesses may sink it, experts say.

The highly prized yellowfin stock is a few years from collapse, scientists warn. Yet, distant-water fishing parties like the European Union and coastal states have struggled to agree on how to reduce catches. The latest round of negotiations at the Indian Ocean Tuna Commission (IOTC) centered on proposals by the EU and the island nation of Maldives. Members adopted a revised version of the Maldives’ plan after a week of hectic talks that concluded on June 11.

A stock crash will hit EU-dominated commercial fisheries and endanger a vital nutrition source for two dozen Indian Ocean coastal states, including some of the world’s poorest countries like Madagascar, Somalia and Yemen. The broader ecosystem impacts of wiping out a species whose habitat sprawls across the entire western Indian Ocean are unknown.

While the Maldives put forth a more ambitious plan than the EU, the one finally agreed on is less so. “The rebuilding plan is toothless and weak,” said Umair Shahid, WWF’s Indian Ocean tuna manager. “It was watered down quite drastically.”

The Maldives proposed a 35% reduction for distant-water fishing members like the EU that caught a quarter of the Indian Ocean yellowfin tuna catch in 2019, the largest share for any member. This was slashed to 21%. Considering vessels controlled by EU companies but flagged to other nations, the bloc caught about 115,000 tons of yellowfin in 2019. Over four decades, EU-controlled boats have harvested nearly 4 million tons of yellowfin from the Indian Ocean, a third of total catches. 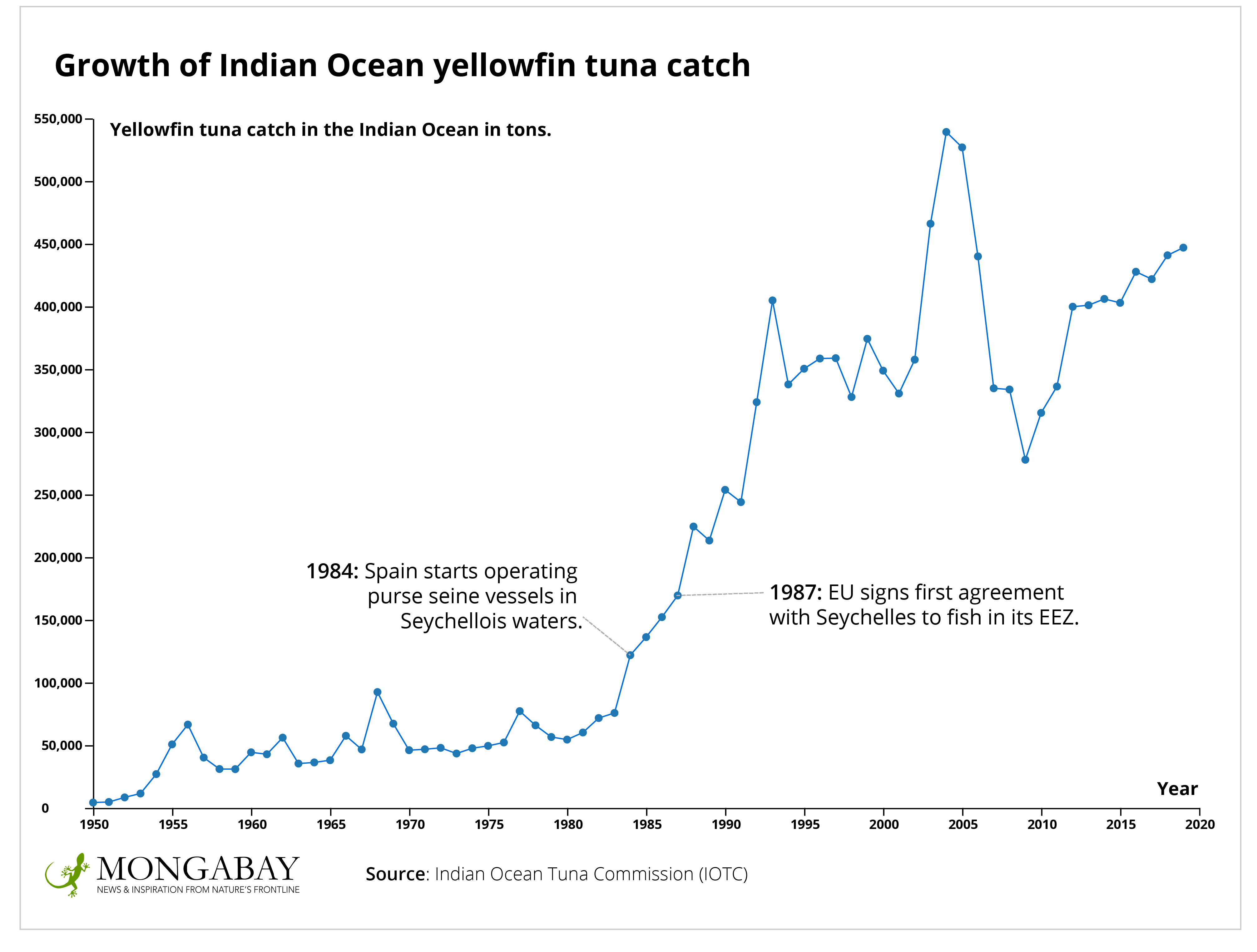 Unlike the EU’s plan that sought reductions based on fishing gear type, the Maldivian proposal imposes restrictions on individual parties based on their development status. Developing coastal states will be subject to a 12% cut, while small island developing states (SIDs) and least developed coastal countries will face a 10% reduction in their catches. Apart from the Maldives, there are only three other SIDs in the region: Seychelles, Mauritius and Comoros. European companies ultimately control the Seychellois and Mauritian purse seine fleets, a Mongabay report found.

The EU proposal highlighted the growing importance of coastal fisheries and blamed coastal states for the unsustainable fishing levels while vigorously opposing deep cuts to its industrial fisheries. In its plan, the bloc proposed a 20% cut for purse seine, gillnet and longline fisheries, if catches were more than 5,000 tons in 2014 regardless of whether these are developed or developing countries. The EU’s Indian Ocean fleet is made up of mostly purse seiners.

Five coastal states — Indonesia, Iran, India, Oman and Madagascar — raised objections to the new resolution, which means they would not be subject to the updated measures. Taken together, fisheries in these countries accounted for about a third of yellowfin tuna catch in 2019. Barring Madagascar, the remaining four are major fishing nations. Iran has witnessed substantial growth in catches in the past decade, which stood at 58,000 tons in 2019. The other three countries each captured between 30,000-37,000 tons that year. Their lack of support is a major blow for efforts to rebuild the stock.

Countries like India and Oman oppose the cuts on the grounds that most of their tuna catch is taken by small-scale fishers for subsistence within their own waters. Citing the impact of COVID-19 on their economies, the countries refused to accept the reductions. Indonesia’s objection is linked to a dispute with the IOTC about the accuracy of its reported catches, which would determine its share under the new plan. Madagascar did not favor a 2,000-ton cap, a limit it faces because its catches have historically remained below 2,000 tons.

The new plan would narrowly meet the IOTC scientific committee’s recommendation of keeping total yellowfin tuna catch below 403,000 tons if there is full compliance. But with lower ambition from the EU and five members objecting, this target may not be met in 2022 when the plan takes effect.

While the EU has accepted cuts under earlier iterations of the plan, first launched in 2016, the bloc allegedly breached its catch limits in 2017 and 2018. It promised an investigation into overfishing by the Spanish fleet in 2018 and was to present its findings this month. The EU delegation said the analysis is yet to take place.

A proposal sponsored by Kenya calling for greater restrictions on the use of fish aggregating devices (FADs) was not adopted, with active opposition from the EU, whose purse seine fleet is almost entirely dependent on FAD-aided fishing. FADs are known to cause marine pollution and harm fish stocks because they tend to attract juveniles. The removal of juveniles that have not reproduced imperils fish populations and their ability to rebound.

While other gear types like pole and line reel in more yellowfin juveniles than adult fish as a proportion of the catch, since purse seiners catch more tuna, they harvest more juveniles overall.

The failure to tackle FADs effectively is one reason organizations like the International Seafood Sustainability Foundation (ISSF), a coalition of seafood companies, scientists and NGOs, could reduce tuna sourcing from the Indian Ocean. The foundation criticized the “minimal overall progress for the long-term protection of the region’s tuna stocks.”

It’s a sign of the growing pressure on IOTC members to turn the tide on overfishing. The Maldives has a well-developed domestic tuna fishery and is a big exporter of yellowfin tuna. The country is known for promoting sustainable fishing but its market will also be in jeopardy if retailers and buyers boycott Indian Ocean yellowfin tuna.

“The Indian Ocean Tuna Commission’s inability to come to an agreement on a sufficient reduction in yellowfin tuna catch levels isn’t new, but it is particularly disappointing that the Commission failed again this year, given its market is now at stake,” said Glen Holmes from U.S. NGO the Pew Charitable Trusts.

At the same time, protracted discussions about yellowfin tuna have led to other critical issues being sidelined, including the overfishing of another tuna species: skipjack (Katsuwonus pelamis). Though not in as dire straits as yellowfin, this species was also overfished between 2018 and 2020. “There was some incredibly hard negotiating, particularly on the part of the Maldives, and I congratulate them on being able to get a resolution,” Holmes said. “Unfortunately, it took up way too much time.”

The current approach of haggling over catch limits for individual species may also be short-sighted, other experts say. “We need to look at tunas from a multi-species angle. This fishery is not operating in isolation; these are co-dependent stocks,” Shahid said. “We need fishing strategies and rules that take into account the impact of one species on another. Without an ecosystem-based approach, it will be very difficult to manage the stocks.”

But the IOTC’s yellowfin tuna woes are far from over. The interim measure is applicable only for 2022. A new stock assessment will take place this year, which will likely trigger a fresh round of negotiations.