From 1999-2010, nearly three percent of the Amazon rainforest burned, and climate forecasts indicate dry conditions conducive to fire will only become more commonplace in the future. Scientists had long thought fire wasn’t a significant threat to rainforest health. However, a new study indicates that rainforests can be very vulnerable to fire, and it warns the current combination of climate change and deforestation may be pushing Amazon forests past the breaking point.

The study, published in the Proceedings of the National Academy of Sciences and conducted by scientists from Woods Hole Research Center, took place over eight years in the southeast portion of the Amazon. To determine how burning affects area forests, the researchers compared the health and resiliency of three plots: one burned every year, one burned every three years, and one – their control plot – that was never burned. 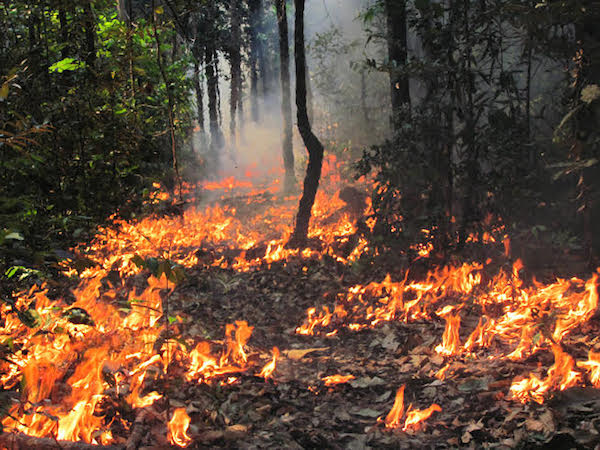 Burning of a test plot. Photo by Paolo Brando.

The team assumed the plot burned annually would show more resistance to fire since frequent small burnings would limit the amount of burnable debris such as shrubs and branches. However, that was not the case.

“We burned both plots..and both plots responded really strongly to the fires,” Dr. Paolo Brando, lead author of the study, told the BBC.

It turns out the drier-than-normal conditions the area experienced during the study led to more flammable debris in plots than the researchers expected.

“There was a shift in the system from a forest to a savannah-like environment…grasses were invading the forest and there were fundamental changes within the ecosystem,” Brando told the BBC. He said grasses further increase the risk of fire as they can accumulate significantly more fuel than can native trees.

Unlike temperate forests such as those in the western U.S. and parts of Australia that are regarded as “burn ecosystems” due to their tolerance of wildfires, rainforests are not well-adapted to fire. Even small fires can have big impacts on forest structure and overall health, killing upwards of 40 percent of trees in a given area.

After rainforest is deforested through burning or other means, the area becomes hotter, drier, and colonized by grasses. In effect, it changes into an entirely different ecosystem, one that is more vulnerable to future fires. Photo by Paolo Brando.

The researchers also discovered that drought has a bigger impact on wildfire than they expected, even when infrequent. Since 2005, the Amazon has experienced the two most severe droughts on record; in 2007, NASA satellite data shows that fires in southeast Amazonia burned 10 times more forest than in an average climate year – an area the size of a million soccer fields.

“The forest didn’t burn much in average years, but burned extensively in drought years,” said co-author Michael Coe. “We tend to think only about average conditions but it is the non-average conditions we have to worry about.”

But what if the non-average conditions become the new normal? Climate models indicate the Amazon is likely to experience ever-longer dry seasons in the future, leading to bigger and more frequent droughts. Studies show this climate change is a result of warmer temperatures in the tropical Atlantic, compounded by damaging land-use practices. Deforestation for lumber and ranching purposes, often through burning, worsens an already hot and dry situation.

“Burned plots were four degrees warmer because they had fewer leaves and less capacity to cool down the system through photosynthesis,” Brando said. “So we have seen major changes, not only in species composition but in the functionality of the forest as well; it cycles less water because it is warmer and stores less carbon.” 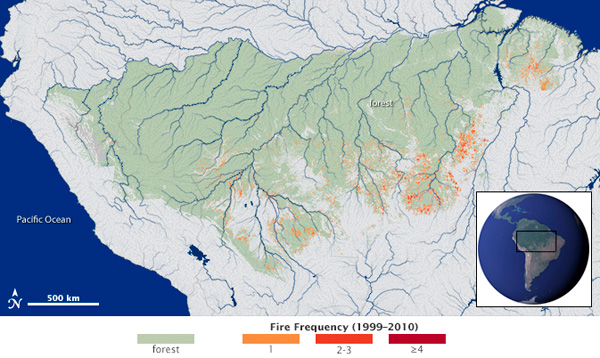 Previous studies mapped the extent and frequency of understory fires across a study area (green) spanning 1.2 million square miles (3 million square kilometers) in the southern Amazon forest. Fires were widespread across the forest frontier during the study period from 1999-2010. Recurrent fires, however, are concentrated in areas favored by the confluence of climate conditions suitable for burning and ignition sources from humans. Photo credit: NASA’s Earth Observatory.

Repercussions of this shift are being felt throughout the Amazon. Interviews with indigenous communities indicate that rainfall patterns and river levels are changing, and the minor fires traditionally used for small-scale rotational agriculture are more difficult to control. They said that fires never used to invade the humid, intact forest; but now, drier conditions are allowing fires to spread further and faster than ever before.

What does this hold for the future of Amazon forests? Scientists simply do not know for sure. The computer programs used to predict future scenarios were made before it was known just how influential fires can be to rainforest ecosystems.

“None of the models used to evaluate future Amazon forest health include fire, so most predictions grossly underestimate the amount of tree death and overestimate overall forest health,” Coe said.

The team’s findings strongly indicate that droughts, fueled by climate change, are leading to significant and systemic drying shifts in Amazon rainforests, resulting in fires that are more frequent and more intense than ever before. It underlines the need for revamped climate modeling technology that considers fire, so that scientists can determine which areas will be most affected in the future.

“This study shows that fires are already degrading large areas of forests in Southern Amazonia,” Brando said, “and highlights the need to include interactions between extreme weather events and fire when attempting to predict the future of Amazonian forests under a changing climate.” 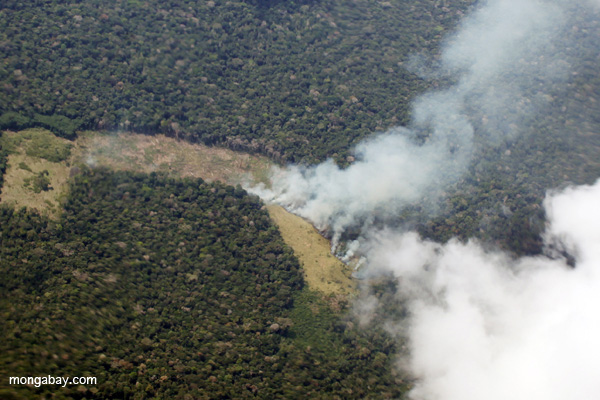 Fire in the Peruvian Amazon. Photo by Rhett A. Butler.

Is Brazil’s epic drought a taste of the future?

(02/25/2014) With more than 140 cities implementing water rationing, analysts warning of collapsing soy and coffee exports, and reservoirs and rivers running precipitously low, talk about the World Cup in some parts of Brazil has been sidelined by concerns about an epic drought affecting the country’s agricultural heartland.

(02/06/2014) New research published in Nature adds further evidence to the argument that drought and fire are reducing the Amazon’s ability to store carbon, raising concerns that Earth’s largest rainforest could tip from a carbon sink to a carbon source.