In past decade, Brazil has done the carbon equivalent of taking every car off America’s roads for three years

Brazil’s success in reducing deforestation in the world’s largest rainforest has been much heralded, but progress may stall unless farmers, ranchers and other land users in the region are provided incentives to further improve the environmental sustainability of their operations, argues a study published this week in the journal Science.

The paper, co-authored by an international team of researchers led by Daniel Nepstad of the San Francisco-based Earth Innovation Institute, starts with a detailed overview of recent shifts in the Brazilian Amazon, including reasons for the 70 percent drop in deforestation recorded over the past decade. The cut in Amazon deforestation effectively spared 86,000 square kilometers of rainforests, an area larger than the state of Maine or equivalent to 14.3 million soccer fields. That reduction in deforestation prevented 3.2 billion tons of carbon dioxide emissions, equal to the savings that would have been achieved by taking all cars off American roads for three years. 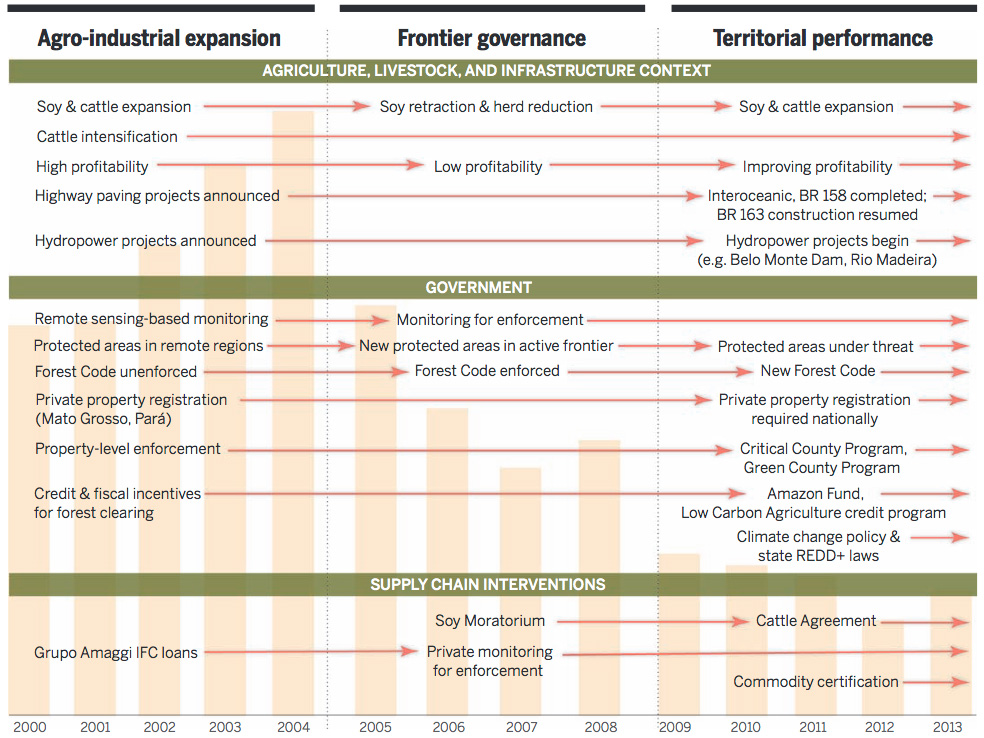 Phases in the evolution of public policies and supply chain initiatives to control Amazon deforestation: 2000 to 2013. Image courtesy of Nepstad et al 2014 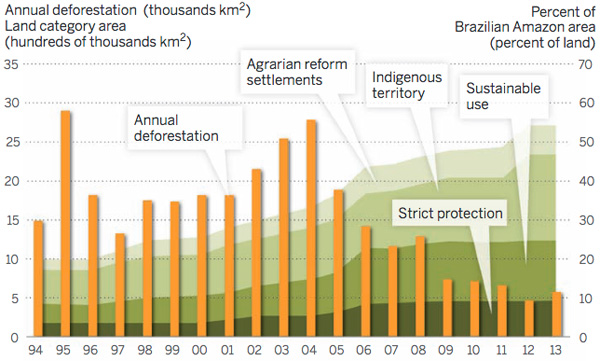 The reduction, which came of the heels of a period of skyrocketing deforestation for industrial soy and cattle production, was driven by several factors that evolved over time, including better forest monitoring, improving frontier governance, government policies, new protected areas, pressure from environmentalist groups like Greenpeace, and macroeconmic trends. Yet despite the slowing rate of forest clearance, Brazil’s agricultural output has continued to grow.

The authors argue that this combination of mostly punitive factors — threats of fines and jail, risk to reputations, and land use restrictions — was critical to reduce deforestation.

“There is an urge to find a silver bullet hiding in all the different deforestation efforts. But the truth is that the government can’t claim this win alone, nor can Greenpeace or responsible companies,” said co-author Toby McGrath of Earth Innovation Institute. “It’s the mixture of interventions that worked.”

But in face of rising global commodity demand, these gains may not be sustainable unless positive incentives are created for land holders.

“These gains are globally significant, but fragile,” said Nepstad. “We’re bumping up against the limits of what can be achieved through punitive measures. As global demand for soy and beef begins to grow again, we will need a new approach to keep deforestation low in the Amazon.”

“Farmers are frustrated. They are tired of top-down approaches and big UN declarations, and they aren’t seeing price premiums from certifications. We’ve made great strides, but to lock them in we need to start integrating positive incentives too. We have to help farmers get on the right path.”

Nepstad and colleagues point to several developments and nascent initiatives that could eventually help deliver these incentives. For example, Norway has put up a billion dollars to reward Brazil for reducing deforestation, while emerging frameworks could further incentivize better stewardship in the longer term.

To hasten progress in expanding incentive programs, the authors call for a “territorial approach” that builds on successes at a sub-national level.

Incentives for sustainable production with and without territorial performance approach. (A) Farmers operating in isolation are faced with many demands from regulatory agencies, commodity buyers, and financial institutions but do not receive significant positive incentives to slow deforestation. (B) The type of collective action to slow deforestation that is achieved in the Green County program could be reinforced through multiple incentives for territorial (county-wide) declines in deforestation. Regulatory agencies can simplify their licensing procedures, commodity suppliers can give full access to markets and better terms on preharvest loan packages, and banks can lower interest rates and improve terms. Caption and image courtesy of Nepstad et al 2014

“Farmers in regions that meet these goals would be rewarded with preferred access to finance and buyers,” explains a news release. “This approach has worked to change other farming and ranching practices, such as safety measures to prevent foot and mouth disease. It aligns positive action with economic gain and encourages enforcement by peers within the region, rather than relying on national level policies that are difficult and expensive to monitor and enforce.”

The authors say these positive incentives could help attract some of the investors and companies that left the region due to concerns over deforestation. It could also encourage more productive use of degraded lands that currently offer little economic or ecological value. 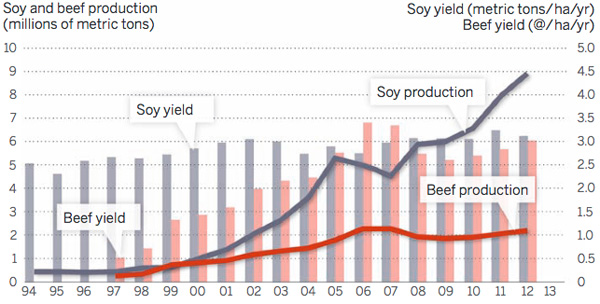 Soy and beef production and yields (for beef yields, @ = 15 kg of carcass weight) in the Brazilian Amazon. Image courtesy of Nepstad et al 2014

“Brazil’s remarkable decline in deforestation provides valuable lessons on the importance of public policies, monitoring systems, and supply chain interventions in slowing the advance of a vast, complex agricultural frontier. The challenge now is to build upon this progress to construct a strategy for promoting a new model of rural development in which punitive measures are complemented by positive incentives and finance at scale for landholders, indigenous communities, counties, and states to make the transition to low-deforestation, productive, sustainable rural development,” the paper concludes.

The stakes for the region — and the rest of the world — are high: some researchers suggests that if forest cover in the Amazon falls below a certain threshold, much of its rainforest could shift toward a drier, savannah-like ecosystem. The impacts on biodiversity, regional water cycles, and global climate would be immense. 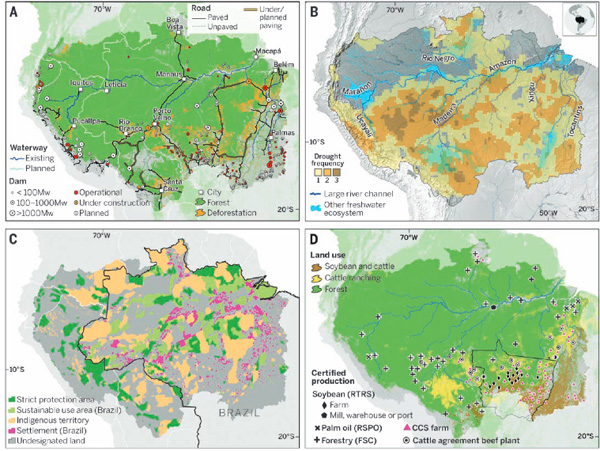 The status of the Amazon region. (A) Infrastructure and forest loss since 2000. Highways (paved, unpaved, and planned paving), waterways (current and planned), and hydropower plants (current, under construction, and planned, with output scaled by size). Forest loss is of all forest types from 2000 through 2012. (B) Rivers, other wetland ecosystems, and the number of drought episodes that exceeded the threshold of rainfall deficit. (C) Indigenous territories, sustainable development reserves, strict protection reserves, agrarian reform farm settlements (Brazil only) from INCRA, and undesignated land (public and private, registered or not). Areas of cattle and soy production (IBGE) and locations of certified soy production and processing (Roundtable on Responsible Soy), palm oil mills (Roundtable on Sustainable Palm Oil), timber production (Forest Stewardship Council), beef plants in the Cattle Agreement, and farms in the Registry of Socio-Environmental Responsibility (CCS). Image courtesy of Nepstad et al 2014