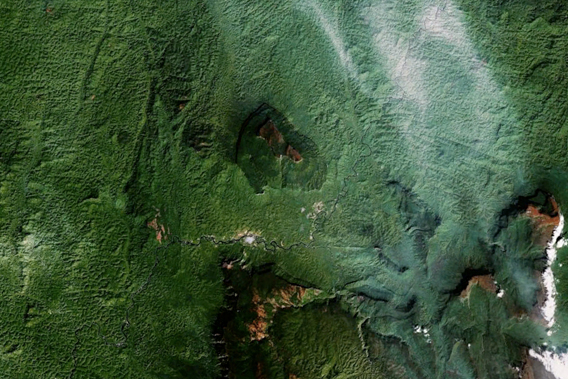 Terra Incognito? Venezuela’s Amazon rainforest (a portion of which is viewed here by Google Earth) has been almost wholly ignored by researchers.

Andean forests even less represented in research than the Amazon.

Although the Amazon is the world’s largest tropical forest, it is not the most well known. Given the difficulty of access along with the fear of disease, dangerous species, indigenous groups, among other perceived perils, this great treasure chest of biology and ecology was practically ignored by scientists for centuries. Over the past few decades that trend has changed, however even today the Amazon remains lesser known than the much smaller, and more secure, tropical forests of Central America. A new study in mongabay.com’s open access journal Tropical Conservation Science, which surveyed two prominent international tropical ecology journals (Biotropica and Journal of Tropical Ecology) between 1995 and 2008, finds that Central America was the subject of twice as many studies as the Amazon. In fact, according to the authors, much of the Amazon remains terra incognito to researchers, even as every year more of the rainforest is lost to human impacts.

“The largest stand of white-sand forest in western Amazonia was first visited by scientists in 2004. The bamboo thickets of southwestern Amazonia, which cover an area larger than the United Kingdom, remain essentially unexamined,” write the authors. “The same is true for the swamps and wetlands that cover 6-8 percent of the Amazon basin, aquatic ecosystems across the continent, and most of the eastern slopes of the Andes.”

Even when studies were conducted in the Amazon, they are largely done in specific regions due to difficulties of access. In fact, over half the studies occur in just three regions: Manaus, Brazil; Yasuni National Park, Ecuador; and Madre de Dios, Peru, while a staggering 31% of all Amazon studies surveyed were undertaken at just four field stations.

“While field work in Peru’s Madre de Dios watershed has produced more than 800 articles in peer-reviewed biology journals to date, the corresponding number for the neighboring and similarly-sized Alto Purús watershed [also in Peru] is nine,” the authors write.

Not surprisingly, certain Amazonian countries were more focused on while others have been largely ignored. Almost half (49%) of the Amazon studies were undertaken in Brazil. In contrast 1.6% of Amazonian studies occurred in Venezuela.

“A working understanding of South America’s tropical forests does not require that biologists visit every last creek and hilltop, or study every watershed with equal intensity, but it does require that they have a clear picture of the biases that derive from the patchwork exploration of the landscape,” the researchers write.

Research in the Amazon was also largely conducted by foreigners: over a third of the Amazonian studies were undertaken by US researchers and over a quarter by Europeans. Brazil makes up most of the difference (23%) while only 6% of research in the Amazon is done by non-Brazilian South Americans.

The Amazon is in second place for tropical research, followed closely by third place, Southeast Asia, and fourth Africa. But no-where is so underrepresented as the Andean tropics.

The Andes: even lesser known

According to the paper some areas of the Andes were neglected altogether: “no studies were recorded in large ecoregions of the central and southern Andes (e.g., central Andean dry puna, central Andean puna, Peruvian yungas).”

Like the Amazon, the Andes are usually researched by non-native scientists. Over half of the research done in the Andes was conducted by Europeans with Germans publishing more studies on the Andes than researchers from all of the Andean countries combined.

“The Andean range—the undisputed epicenter of global biodiversity and endemism—remains one of the least-studied tropical regions on the planet,” write the authors.

Given the dearth of research in the Amazon and the Andes, the paper calls for “a significant boost in overall research effort and a more equitable geographical coverage in field research.”

The researchers argue that funding is key to increasing and diversifying studies in the Amazon and Andes.

“The entities best positioned to make these changes are likely international funding agencies and national-level institutions like universities, museums, government science agencies, and [NGOs),” the authors write, adding that grants should be made available for studies specifically focusing on the Amazon or the Andes.

“In the long term, the most cost-effective way to maintain the scientific productivity of [field stations] is via endowments or grant programs that subsidize their operating expenses for long periods,” the authors write.

More investment should also be made in educating and training scientists in the regions. But, according to the researchers, this isn’t just the responsibility of Amazonian-Andean countries.

In good news, the authors did find that studies in the Amazon and Andes were growing, albeit very slowly. Central America is likely to remain the undisputed king of tropical studies for some time to come.

“At the rates of growth measured in our dataset, it will take the Andes-Amazon region [around] 120 years to reach the current productivity of Central America, ” the authors conclude.

(10/26/2010) A new report by the World Wide Fund for Nature (WWF) confirms the Amazon rainforest, even as it is shrinking due to deforestation, remains among the world’s most surprising places. According to the report, Amazon Alive, over the past decade (1999-2009) researchers have found 1,200 new species in the Amazon: one new species for every three days. Not surprisingly invertebrates, including insects, made up the bulk of new discoveries. But no type of species was left out: from 1999-2009 researchers discovered 637 new plants, 357 fish, 216 amphibians, 55 reptiles, 39 mammals, and 16 new birds. In new discoveries over the past decade, the Amazon has beaten out a number of high-biodiversity contenders including Borneo, the Eastern Himalayas, and the Congo rainforest.

Hunting threatens the other Amazon: where harpy eagles are common and jaguars easy to spot, an interview with Paul Rosolie

(08/05/2010) If you have been fortunate enough to visit the Amazon or any other great rainforest, you’ve probably been wowed by the multitude and diversity of life. However, you also likely quickly realized that the deep jungle is not quite what you may have imagined when you were a child: you don’t watch as jaguars wrestle with giant anteaters or anacondas circle prey. Instead life in the Amazon is small: insects, birds, frogs. Even biologists will tell you that you can spend years in the Amazon and never see a single jaguar. Yet rainforest guide and modern day explorer Paul Rosolie says there is another Amazon, one so pristine and with such wild abundance that it seems impossible to imagine if not for Rosolie’s stories, photos, and soon videos. This is an Amazon where the big animals—jaguars, tapir, anaconda, giant anteaters, and harpy eagles—are not only abundant but visible. Free from human impact and overhunting, these remote places—off the beaten path of tourists—are growing ever smaller and, according to Rosolie, are in danger of disappearing forever.