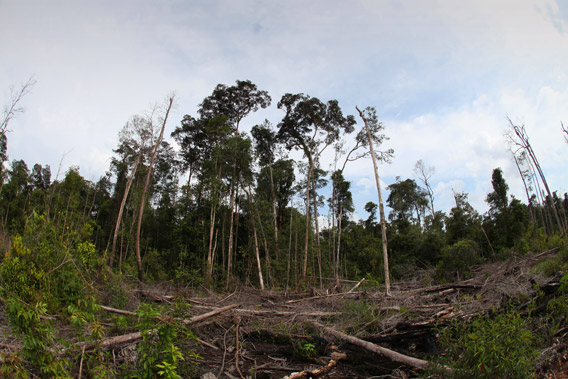 Deforestation near Gunung Palung in Indonesian Borneo. Photo by: Rhett A. Butler

Deforestation, oil spills, coral acidification: these are just a few examples of ongoing, and well-researched, environmental changes that are imperiling the world’s biodiversity. But what issues are on the horizon? At the end of 2010, experts outlined in Trends in Ecology & Evolution 15 issues that may impact conservation efforts this year and beyond, but are not yet widely known. These are issues you may never hear about it again or could dominate tomorrow’s environmental headlines.

“Our aim was to identify technological advances, environmental changes, novel ecological interactions and changes in society that could have substantial impacts on the conservation of biological diversity […] whether beneficial or detrimental,” the authors write in the paper. Experts originally came up with 71 possible issues and then whittled it down to the 15 most important—and least known.

But given that these issues may or may not pose a problem, what should society do in order to stay ahead of the curve?

THE ISSUES (in alphabetic order)

Acid rain from nitrogen: Nitric acid rain, caused by nitrogen emissions from fertilizers and vehicles, is known to harm wild species, including important fish populations. However, nitrogen emissions are not regulated and the full extent of damage remains largely unstudied.

Climate agreement uncertainty: With the Kyoto Protocol ending next year and no agreement yst to take its place, there is uncertainty as to what role conservation will play in climate change mitigation measures, both worldwide and locally. For example, initiatives to protect forests and possibly other ecosystems, due to their climate sequestration abilities, have yet to fully take-off.

Earthworm invasion: While the invasion of earthworms may sound innocuous, it’s not. European earthworms have recently colonized boreal forests in North America that were previously earthworm-free. Transforming the soils they inhabit, the European invaders are expected to impact the entire ecosystem, from salamanders to trees.

Genetic modifications to mosquitoes: In an effort to push certain disease-carrying mosquito species to extinction, scientists are working on modifying the mosquito’s genetics. But how this could impact biodiversity—positively or negatively—remains a mystery as little is known about the role that mosquitoes play in ecosystems. Will insect-eating species feel the loss of certain mosquitoes? Do the dangerous diseases help keep other species’ populations in check?

Hydraulic fracturing: Also known as the near-expletive, fracing, hydraulic fracturing extracts natural gas from shale basins, but the environmental footprint is huge. Intensive water use, infrastructure on otherwise undeveloped lands, and the possibility of toxic pollution, including known carcinogenics, could greatly impact biodiversity as well as people. The industry is rising in the US where it goes unregulated by the EPA.

Lithium mining: Growing demand for lithium used in rechargeable batteries, such as those found in most electric cars, has led to a boom in mining for the rare mineral. Found in mostly shallow saline lakes in the Andes, little is known about how lithium mining impacts the environment and species.

Ocean domestication: Humans are turning increasingly to the oceans to produce food (fishing and aquaculture), energy, mine for minerals, and mitigate climate change. Already overfished and polluted the oceans are facing a steady increase in a number of new and old pressures. The cumulative impacts threaten to upend ocean ecosystems entirely, domesticating, in a sense, one of the world’s last wild places.

Rinderpest: If the cattle disease rinderpest, which has recently been eradicated, should re-emerge it could be devastating for ungulate species, people, and agriculture. The last rinderpest pandemic killed 90% of Kenya’s wild buffalo in the 1890s.

Soil questions: Research shows that global soils are emitting 20-30% more carbon per year likely in response to rising temperatures from climate change. But scientists have yet to decipher the source of the emissions: plant roots or microbes. Depending on the source, this could impact global carbon emissions and biodiversity in turn.

Undercutting parks: A new study raises concerns about the trend of downgrading, downsizing, or degazetting protected areas, such as national parks, which were established to preserve wildlife and ecosystems. With rising pressures from agriculture, mining, and simply growing human populations, the threats to parks are expected to grow, not diminish. A number of governments worldwide are currently mulling weakening their protected areas for industrial uses.

For more detailed information on any of these issues, please see the paper: Horizon scan of global conservation issues for 2011.

(03/03/2011) So, here’s the good news: a mass extinction, the world’s sixth, is still preventable. But the bad news: if species currently threatened with extinction vanish—even over the next thousand years—homo-sapiens will be the first single species responsible for a mass extinction. Comparing today’s current extinction crisis with the big five that occurred in the past, a new study in Nature finds that while the situation is dire, the choice is ultimately up to humanity. “If you look only at the critically endangered mammals—those where the risk of extinction is at least 50 percent within three of their generations—and assume that their time will run out, and they will be extinct in 1,000 years, that puts us clearly outside any range of normal, and tells us that we are moving into the mass extinction realm,” explains lead author Anthony D. Barnosky, UC Berkeley professor of integrative biology.

The ocean crisis: hope in troubled waters, an interview with Carl Safina

(02/07/2011) Being compared—by more than one reviewer—to Henry Thoreau and Rachel Carson would make any nature writer’s day. But add in effusive reviews that compare one to a jazz musician, Ernest Hemingway, and Charles Darwin, and you have a sense of the praise heaped on Carl Safina for his newest work, The View from Lazy Point: A Natural Year in an Unnatural World. Like Safina’s other books, The View from Lazy Point focuses on the beauty, poetry, and crisis of the world’s oceans and its hundreds-of-thousands of unique inhabitants. Taking the reader on a journey around the world—the Arctic, Antarctic, and the tropics—Safina always returns home to take in the view, and write about the wildlife of his home, i.e. Lazy Point, on Long Island. While Safina’s newest book addresses the many ways in which the ocean is being degraded, depleted, and ultimately imperiled as a living ecosystem (such as overfishing and climate change) it also tweezes out stories of hope by focusing on how single animals survive, and in turn how nature survives in an increasingly human world. However, what makes Safina’s work different than most nature writing is his ability to move seamlessly from contemporary practical problems to the age-old philosophical underpinnings that got us here. By doing so, he points a way forward.

(03/08/2011) A new study finds that diversity of plant species matters—big time. Analyzing nearly 600 research studies, the meta-study in the American Journal of Botany found that productivity in biodiverse plant ecosystems was 1.5 times higher than in monocultures. In other words, a prairie is more productive than a cornfield and forest more productive than a rubber plantation. The researchers warn that eroding plant diversity threatens essential ecosystems services such as food, water purification, oxygen production, carbon sequestration, and the availability of raw materials.

(12/20/2010) Below is a quick review of some of the biggest environmental stories of 2010: Climate change rears it ugly head; Oil spill in the Gulf; Agreement to save global biodiversity; Illegal logging crisis in Madagascar; REDD kicks off in Indonesia; Brazil deforestation falls to its lowest level; Hungary’s red sludge; Nestle caves to social media activists; New mammals galore’ and Global climate framework back on the table?