Deforestation ‘out of control’ in reserve in Brazil’s cattle capital

TRIUNFO DO XINGU, Brazil — Lenice Divina Ramos weaves through knee-high weeds and scorched shrubs before halting abruptly near the slice of jungle where, not long ago, she found the charred carcass of her pet monkey.

“The little fellow had no way to escape,” she says wistfully, waving toward the burnt-orange patch of vegetation that remains. “The flames came and burned everything. They burned the farm; they burned the forest, too.”

A few months earlier, in mid-2022, at the height of the Amazon’s dry season, out-of-control flames swept through her 20-hectare (49-acre) plot in the Triunfo do Xingu reserve, in the Amazonian state of Pará.

The fire engulfed everything in its way, including the roughly 2,000 cocoa trees that Ramos had planted two years earlier on land razed by her father some three decades ago.

“It was a big setback for me,” says Ramos, 51, who had planted the cocoa in hopes of earning a sustainable income in the future. “Two years of hard work were wiped out, just like that.”

She’s not certain how the fire started but suspects it came from one of the neighboring ranches that sprawl for miles across Triunfo do Xingu, a sustainable development reserve that has in recent years become the epicenter of the forest destruction gripping the Brazilian Amazon.

“They set one area on fire and it ends up invading their neighbor’s plot,” says one state official involved in managing the reserve, who asked to remain anonymous because he isn’t authorized to speak to the media. “And when the fire starts spreading, it becomes impossible to stop.”

Such fires have consumed huge swaths of Triunfo do Xingu, which stretches some 1.7 million hectares (4.2 million acres) across the municipalities of São Félix do Xingu and Altamira, in Brazil’s cattle-ranching heartland. Between early July and late September, during the dry season when most fires typically take place in the Amazon, satellite data from Brazil’s National Institute for Space Research (INPE) analyzed by Synergia Consultoria Socioambiental showed 3,214 hotspots across 78,000 hectares (193,000 acres) of the reserve.

Deforestation is advancing at a dizzying pace too. Landowners in Triunfo do Xingu are legally required to keep 80% of the rainforest intact, but the reserve has already lost a third of its forest cover since 2006, according to data from the University of Maryland (UMD) visualized on Global Forest Watch. Satellites detected nearly 2.2 million highest-confidence deforestation alerts in 2022, with even the largest, most remote remnants of old-growth rainforest whittled away last year. 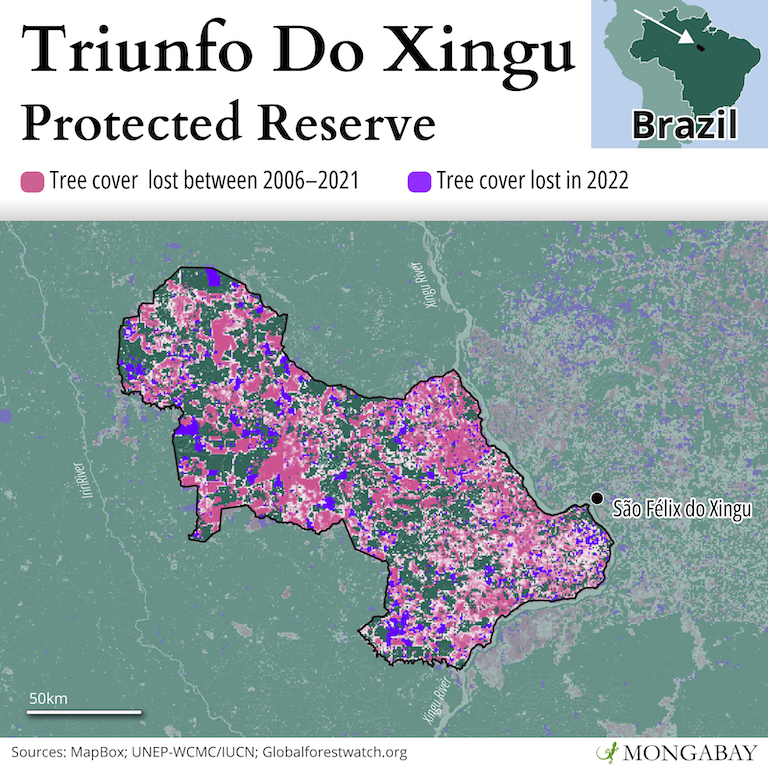 “This is an ecologically important area, so it should be better protected,” says Thaise Rodrigues, an analyst at the Instituto Socioambiental, a nonprofit that defends environmental diversity. “But what we see is deforestation that is completely out of control.”

As our truck snakes along the dirt road slicing through Triunfo do Xingu, we slide past toppled trees and sprawling pastures, where cattle graze in the scorching midday sun. Further along, in one freshly burned patch, a handful of cows lie in the ashes, surrounded by the smoldering remains of rainforest.

About two-thirds of this reserve falls within São Félix do Xingu, Brazil’s largest cattle-producing municipality and home to nearly 20 times more livestock than people. When the reserve was created in 2006, the idea was to promote sustainable development within it, while shielding the region’s rich biodiversity from the frenzied destruction advancing toward it.

Triunfo do Xingu’s protected status allows for some human activity; landholders may officially deforest up to 20% of their land and must leave the rest untouched. But amid lax oversight, deforestation and burning have become far more widespread, according to the state official.

“Today, you will struggle to find a farm — large or small — that has preserved 80% of its forest,” the official says. “The reality is very different.”

Most of the razed forest is quickly replaced by cattle pasture here. As ranchers seek to expand their landholdings, many are encroaching deeper and deeper into the forest. Others are looking to deforest and burn new areas as their existing plots of land become less productive.

“When the pasture becomes too degraded, it’s more convenient for them to just clear another area of forest,” the official adds. “So instead of recuperating the soil, they deforest more land.”

But in recent years, other threats have been rapidly advancing too. Advocates say land grabbing in Triunfo do Xingu is on the rise, as invaders rush to occupy slices of the reserve in the hopes that their land claims will be recognized eventually.

And illegal gold mining has exploded within the territory, sources say, with speculators digging deep into the mineral-rich earth in search of gold and cassiterite, the main ore of tin. On a recent visit to the reserve, wildcat mines, known as garimpos, dotted the landscape, flanked by murky pools of wastewater.

Overall, some 157,300 hectares (388,700 acres) of forest have been razed within the reserve since 2019, according to figures from Rede Xingu+, a network of nonprofits monitoring deforestation in the Xingu River Basin. And there are signs that the destruction is picking up pace: between January and September 2022, 41,552 hectares (102,603 acres) of land were cleared in Triunfo do Xingu.

Environmentalists blame the rapidly advancing destruction on a lack of strict environmental enforcement within Triunfo do Xingu.

Some 16 years after the reserve was created, authorities still have not implemented a concrete land management plan, which would set in stone best conservation practices and define the rules of developing land within the reserve. While state officials are now drafting the document, it’s unlikely to come into force for years, leaving the door open to more ambiguity and destruction, advocates say.

“To truly strengthen protections, you need a management plan,” says Rodrigues, whose organization has repeatedly denounced failures to protect the reserve to federal prosecutors. “And all these years later, we still don’t have one.”

As the light fades over Triunfo do Xingu, some half a dozen trucks carrying environmental enforcement agents pile onto the barge back to the town of São Félix do Xingu. Fresh off a mission in the reserve, they lean wearily onto their muddy vehicles, chattering as the behemoth vessel drifts slowly across the Xingu River.

Their mission, according to one enforcement agent involved, is part of an ongoing operation dubbed “Amazônia Viva” (Amazon Alive), which state authorities first launched in June 2020 in a bid to crack down on illegal encroachments on Pará’s protected areas.

Since the start of the operation, authorities have carried out 30 missions across Pará, placing more than 324,000 hectares (801,000 acres) of land under embargo, the state’s Secretariat of Environment and Sustainability (Semas) said in an emailed statement. Officers have also seized illegal timber, destroyed mining equipment and shut down illicit mines.

In Triunfo do Xingu, such operations have become routine. “We’re here every month, we’re trying to show that the state is present here,” says an enforcement agent who agrees to speak on the condition of anonymity. “So people know they can’t just deforest anywhere they want.”

But despite this heightened presence by authorities, detecting and halting the destruction hasn’t been simple. For one, access within the reserve is difficult, often barring agents from reaching areas deep in the forest that are being razed illegally.

“There are a lot of roads being opened up, and further into the reserve, we’re seeing a lot of garimpos,” the agent says. “Since 2020, the clearing has become more aggressive and it’s less out in the open. It’s moved deeper into the reserve.”

Advocates say that those seeking to encroach on the forest have been emboldened by friendly signals from Brazil’s previous president, Jair Bolsonaro, a proponent of opening up protected areas to farming and mining who held office from 2019 through 2022. Under his leadership, deforestation in the Amazon surged to its highest level in 15 years.

There is some hope on the horizon, with newly sworn-in Luiz Inácio Lula da Silva, who narrowly defeated Bolsonaro, promising to crack down on illegal deforestation across the Amazon. But in Triunfo do Xingu, authorities and advocates worry that it may be too late to rein in the rampant destruction.

“I don’t think it’s possible to control anymore,” says the enforcement agent, with a shake of the head. “At this point, the situation here is just too out of hand.”

As the destruction in Triunfo do Xingu advances, advocates warn that it’s also spilling into other protected areas nearby, threatening the rich biodiversity of this ecologically important region.

The reserve is nestled in the Xingu River Basin, a mosaic of 28 conservation areas and 18 Indigenous territories that together form a crucial ecological corridor boasting a rich variety of plant and animal species, some of which are at risk of extinction in other parts of the Amazon.

When it was placed under federal protection in 2006, Triunfo do Xingu was intended as a protective buffer for other vulnerable areas beyond its borders, like the Apyterewa Indigenous Territory and the Terra do Meio Ecological Station.

But as the forest in the reserve gives way to cattle ranching and wildcat mining, this crucial buffer is fast diminishing and outsiders are encroaching on neighboring protected areas too, says Rodrigues. Invasions have been particularly intense in the Apyterewa Indigenous Territory, which lost 8,189 hectares (20,235 acres) of forest between January and September, according to figures from Rede Xingu+.

“We see that [Triunfo do Xingu] is acting as a vector for destruction, it is adding pressure on these other reserves,” Rodrigues says. “It’s completely the opposite of what it was supposed to do, which was to shield other areas.”

The advancing destruction in Triunfo do Xingu is also undermining efforts to build a more sustainable future, like the one that Ramos envisions.

“We’re already swimming against the current, trying to reforest and plant cocoa,” she says. “When everything burned down, it really took the wind out of my sails.”

Like others in Triunfo do Xingu, her family arrived long before the reserve was created, at a time when razing the forest was the only model of development.

“Thirty years ago, the idea was to arrive here, cut down everything and occupy the forest. And that’s what my father did in the 1980s.”

Now, agroforestry projects are trying to slowly usher in a new kind of economic model in the region. With the help of nonprofit groups like The Nature Conservancy (TNC), farmers are recreating the forest by planting cocoa and other plant species.

“Cocoa can coexist with forest ecosystems, and it can help areas recover their biodiversity,” says Jessé Ramos Bezerra, a conservation specialist at TNC, who is helping farmers plant cocoa on degraded slices of the reserve. “It gives small farmers a way to use degraded soil, without having to deforest more.”

This more sustainable way forward has appealed to Ramos. Still, after the fire, she nearly gave up — but recently she decided to try one more time.

“I’ll have to start from zero now,” she says. “But I’m going to plant again. I know I can get back on my feet again.”

Banner image: Triunfo do Xingu, a sustainable development reserve in the Brazilian state of Pará, has in recent years become the epicenter of the forest destruction gripping the Amazon Rainforest. Cattle ranching is responsible for much of the destruction, but wildcat mining and land grabbing are fast advancing too. Across the reserve, toppled trees, open-pit mines and charred jungle are a common sight. Image by Ana Ionova for Mongabay.