In northern Indonesia dwells a shy and overlooked species: the Talaud bear cuscus. Critically endangered and found on only a few small islands, the marsupial faces a decline due to hunting and habitat loss. Conservation group Progres Sulawesi is spearheading a community-based program to protect this little-known species across the island of Salibabu, which it hopes can serve as a stronghold for the tree-dwelling animal.

“This is an arboreal species, which only occupies the forest canopy, a herbivore, especially a folivore (eats leaves and some fruit), quiet, shy, and lazy,” is how Terri Repi, a lecturer at the Department of Animal Science at Muhammadiyah University of Gorontalo, Indonesia, described the Talaud bear cuscus (Ailurops melanotis). The species also plays an important role in controlling invasive species, such as Merremia peltate, a vine that can strangle vegetation and farmers’ crops, he said.

The animal gets its specific name, melanotis, from its black ears. It’s also equipped with a prehensile tail, meaning it’s well suited to gripping tree branches during its life in the forest canopy.

A study published in 2020, led by Repi, found that the Talaud bear cuscus exists on the islands of Salibabu, Nusa and Bukide, and “probably” also Sangihe Island, none of which are more than 750 square kilometers (290 square miles) in size. All are located in Indonesia’s North Sulawesi province, not far from the southern Philippines. “Salibabu Island is the largest island and has the largest population of cuscus. However, as a large island, it also has a large human population,” Repi wrote in an email. “However, based on my research, locations that can be recommended as habitat for Talaud cuscus conservation, are also on Salibabu Island.”

Repi’s study found that the Talaud bear cuscus was present throughout the island, split across six different research transects. A follow-up study, conducted by Progres Sulawesi earlier this year, however, found the cuscus in only one transect. These results could mean that the species is in serious decline, according to Sheherazade, co-executive director of Progres Sulawesi, though other factors may also be at play, she added.

“It can be the weather, because it’s been rainy during the survey time, but it can be also because the nature of the cuscus itself,” she said in an interview. “If they see you, they will just slowly take all the leaves and completely cover themselves. You need to see them first in order to spot them.” Progres Sulawesi plans to carry out further surveys later this year to shed more light on the species’ distribution on the island.

Already considered a shy species, the Talaud bear cuscus has grown even more afraid of humans due to hunting pressure, Sheherazade said. 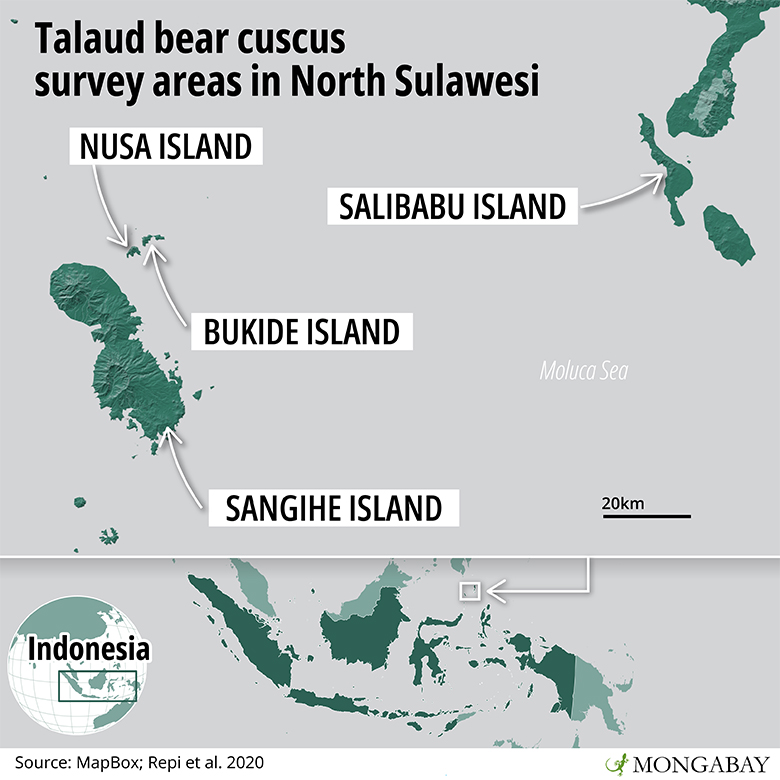 Eaten to the brink

The threats to the Talaud bear cuscus’s survival are similar to those facing many other endangered species. Alongside other pressures, such as land-use change and habit disturbance, the Talaud cuscus faces extinction primarily due to hunting for bushmeat.

A cultural practice known as tola-tola involves eating spiced meat while consuming alcohol. On Salibabu, meat of the Talaud bear cuscus has long filled the role of this preferred snack. “They cook it very spicy, so it’s not only as a meat source but also for the fun side when they drink alcohol,” said Sheherazade, who is herself from Sulawesi. On other islands in Sulawesi, other species, such as turtles, fill this role.

“So, this is kind of the challenge, how to change these cultural practices,” she said. “You know, the species is about to go extinct, but at the same time, it’s also important for their cultural activities. It’s a hard thing to do.”

The Sulawesi bear cuscus (Ailurops ursinus), another cuscus species with a much wider distribution, faces a similar plight and is often targeted as part of the bushmeat trade.

Repi agreed that hunting is of primary concern to the species’ ongoing survival, alongside the destruction of its forest home. He recalls cutting a survey path in a forest on Salibabu, only to return one week later to find it replaced by a corn garden. “This is what drives the next challenge, how to preserve Talaud cuscus [in a way that does not] marginalize the island community,” Repi said. “Or the question is how can the conservation of small islands be carried out by considering species, habitats and communities?”

From dinner to local icon

As an island species with a severely limited distribution, the Talaud bear cuscus is particularly vulnerable to extinction, Repi said. It’s on Salibabu, considered a potential stronghold for the species, that Progres Sulawesi is working with communities to steer the species away from the brink of extinction.

While the conservation community and wider world may know little of the Talaud bear cuscus, local people have a long-standing relationship with the species. Changing this from one of a resource to instilling a sense of pride in the species within community members is central to Progres Sulawesi’s work, Sheherazade said.

Youths are among the key ambassadors to changing perceptions, she said, and are actively involved in population surveys with the organization. By not eating spiced cuscus meat during drinking sessions, these youths are helping to convince others in the community. Progres Sulawesi’s work also involves traditional leaders, village chiefs, priests and other community members. That the organization is led by Sulawesi natives has proved vital when building trust and maintaining relationships with local people, Sheherazade said.

Under Indonesian law, hunting the Talaud bear cuscus is illegal because it’s a protected species, but Sheherazade said she doesn’t believe that threatening those who hunt or eat it with criminal action will work. “[It would be] so easy to go that way but we don’t want that. We don’t want to have that system,” she said. Instead, the preferred approach is to bring communities onside to protect the cuscus, before formalizing this at the village level through regulations.

“But we don’t want to have the village regulation first, but then the community disagree with that,” she added. “[W]hat we want to do is that the community agree with it, so it’s coming from them and then we’ll formalize it.”

So far, the villages of Musi and Alude have made declarations to protect the Talaud bear cuscus. Two other villages, Sereh and Kalongan, recently agreed to ban hunting of the cuscus as well, in a step toward an island-wide ban of the practice in Salibabu.

Steven Awawangi, the village chief of Alude, said he believes the Talaud bear cuscus can become an icon for local people and help to “shine the light on Salibabu Island in the world.”

“In the long-term, protecting the Talaud cuscus will help to protect the forest,” he told Mongabay, as community members gain a deeper understanding of the species’ role in shaping the ecosystem. “But it can also bring an economic benefit to the communities of Salibabu.” Awawangi said he hopes the species can be a boon for ecotourism for the island, encouraging tourism to support local businesses.

Awareness-raising efforts to develop pride in the Talaud bear cuscus are now led by village authorities in collaboration with local government. These efforts have already garnered results, Awawangi said. “For example, right now, the Talaud cuscus is found nearby the village. In the past before working together, they become rarer and rarer to be found. But now it’s easier to find them. and when the local community find them, they report it.”

Sheherazade said she’s hopeful that despite its precarious situation, the Talaud bear cuscus may yet find a route to survival, with the support of Salibabu’s communities. The plan is to take the conservation program to the district level, drawing in the other islands within the species’ small and currently presumed range.

“We look at it as a potential to really make sure of the sustainability of the Talaud cuscus conservation program, not only at the village level,” she said. “We want to bring that to the district level and make sure the governments are well aware of the existence of the conservation program … and they could allocate more money in a Talaud cuscus ecotourism program, for example.”

Banner image: The Talaud bear cuscus. Endemic to only a few islands in northern Sulawesi, Indonesia, the species is considered critically endangered. One study considers the Talaud bear cuscus a “Cinderella species,” one that’s aesthetically appealing but generally overlooked by conservationists and researchers. The island-dwelling cuscus was assigned this status alongside other lesser-known species such as Pennant’s red colobus, Mindoro dwarf buffalo, African wild ass, and pygmy raccoon. Image © Progres Sulawesi/Dewangga.