DAHAB, Egypt — A decaying super-tanker anchored off Yemen with 1.1 million barrels of Marib light crude oil in its hold looks increasingly likely to wreak havoc in the Red Sea, experts are warning. Talks between the U.N. and the Houthi administration in control of the area aimed at brokering a deal for international intervention reached a “dead end” late June 1, according to a Houthi statement.

The structural integrity of the FSO Safer is rapidly deteriorating, risking a catastrophic oil spill that threatens the region’s people and marine ecosystem, which scientists describe as a critical refuge from climate change for corals. A solution has proven elusive in a country mired in civil war and humanitarian crisis.

The Houthis have repeatedly blocked requests to bring in international expertise, funding and equipment to safeguard the area, declining to grant permission to access the vessel under terms acceptable to the U.N. despite agreeing to a deal in principle in November 2020.

The U.N. has yet to comment on the apparent impasse.

The Safer is a floating storage and offloading vessel, property of the Yemeni state-owned company SEPOC. It has been anchored at the end of the Marib oil pipeline, around 9 kilometers (5.5 miles) offshore from the port city of Hudaydah, since 1988. The Houthi movement, formally known as Ansar Allah, captured the Safer in 2015, after it took over the area from the internationally recognized government of Yemen. Zero basic maintenance since has led to dangerous corrosion as the Red Sea’s highly saline waters eat away at the Safer’s single hull unchecked.

“It’s not a question of whether the Safer will eventually spill its contents, it’s a question of when,” David Soud, a security analyst at U.S.-based international consultancy I.R. Consilium, who has followed the situation closely, told Mongabay by email.

Without timely maintenance, repairs or offloading of its oil cargo, the risk is a spill four times the volume of the catastrophic 1989 Exxon Valdez spill in Alaska.

A significant spill would pollute marine ecosystems, proposed marine protected areas and coastal zones north and south of the Safer, including mangroves that provide breeding grounds for fish. The pollution would have severe knock-on effects for local people, experts say.

The impact on corals may have an extra sting in its tail. A growing body of research suggests that northern Red Sea corals may be uniquely well adapted to rising ocean temperatures.

“The corals in the Red Sea very likely represent humanity’s best chance to preserve a major coral reef ecosystem intact beyond the end of this century,” Anders Meibom, a biogeochemist at the University of Lausanne in Switzerland, told Mongabay. Meibom co-authored a 2017 study revealing unprecedented heat tolerance in northern Red Sea corals.

Previous research into coral heat tolerance found mass bleaching and death typically occur when corals are exposed to water 1-2° Celsius (1.8-3.6° Fahrenheit) above their local summer maximum for a month or more. Meibom’s team was shocked to find subjecting Stylophora pistillata corals from the northern Red Sea to temperatures up to 5°C (9°F) above their usual conditions, instead of killing them, resulted in up to a 51% increase in their production of food via photosynthesis. Initially the team felt they must have made a mistake, but the science was sound.

In the context of mass coral reef destruction across the globe due to warming and increasingly acidic seawater, “it is hard to overemphasize the importance of the Red Sea reefs. We must do everything we can to protect them,” Meibom said.

He also co-authored a paper in 2020 examining seasonal variations in the environmental impact of a potential spill from the Safer. The paper decries the international community’s failure to intervene, stating that the Safer’s years of deterioration in plain sight have constituted “the most advanced warning ever of a major oil spill.”

“But what would be unusual about the Safer is this is an utterly predictable, utterly preventable case of deliberate neglect,” said Doug Weir, research and policy director at the U.K-based Conflict and Environment Observatory (CEOBS). “It’s not somebody directly shooting at it — this is a political decision to allow this vessel to essentially reach a stage where it causes an environmental catastrophe.”

A rotating skeleton crew of seven SEPOC staff act as caretakers of the vessel, but are unable to carry out necessary maintenance or offload the oil. They’ve made only emergency repairs. With five armed Houthis guarding the vessel at all times, “it’s a precarious and high-pressure situation,” Soud said.

The condition of the hull, engine room and storage tanks has deteriorated significantly and several fractures and leaks have already been detected. 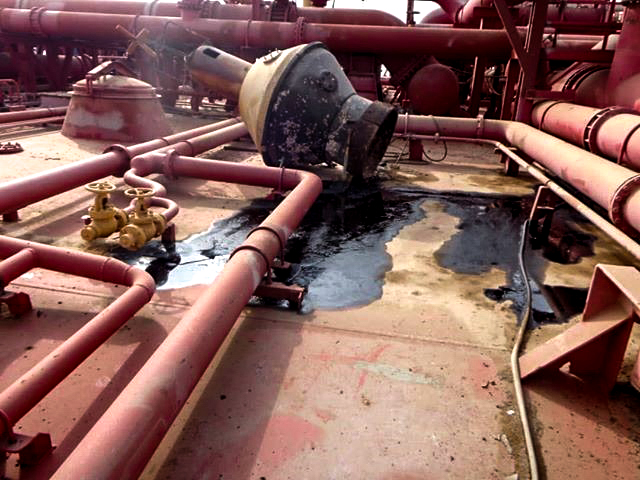 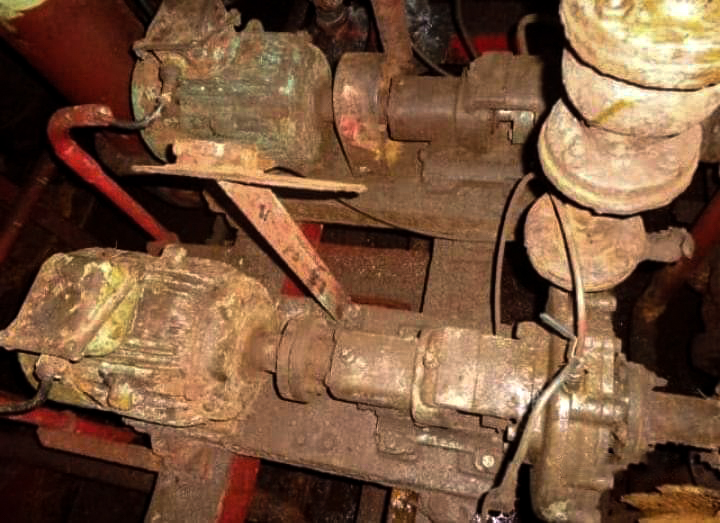 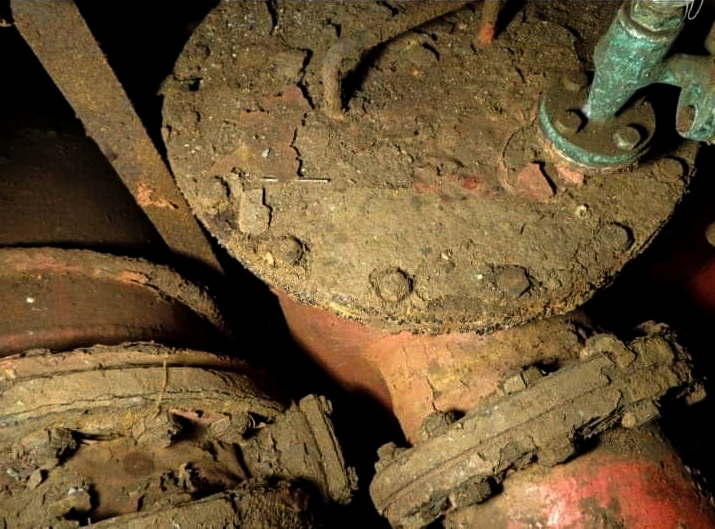 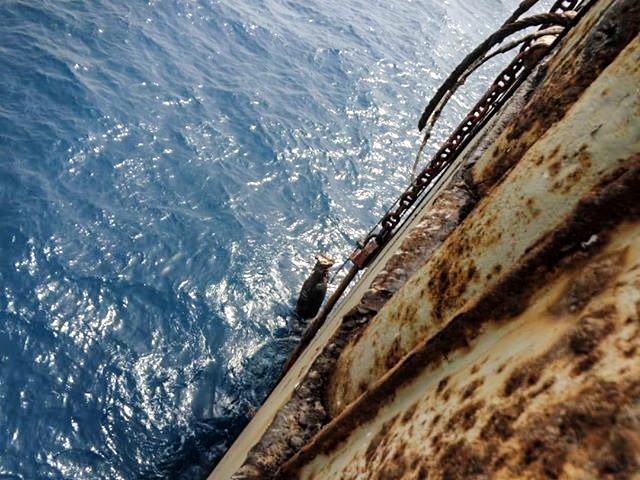 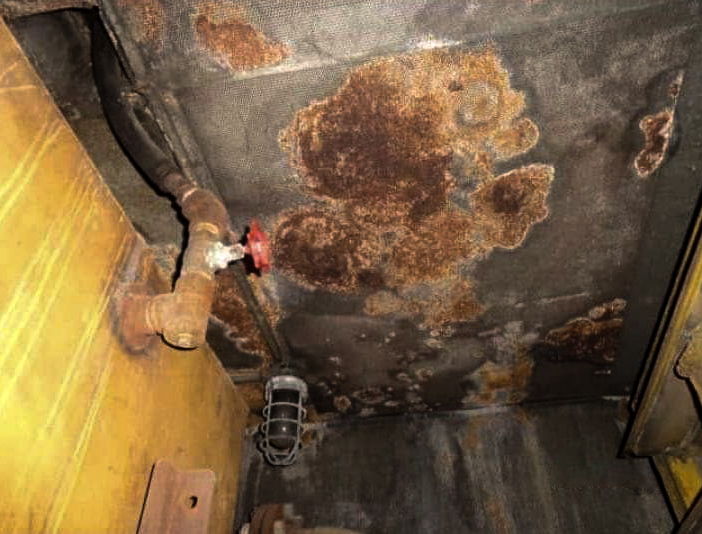 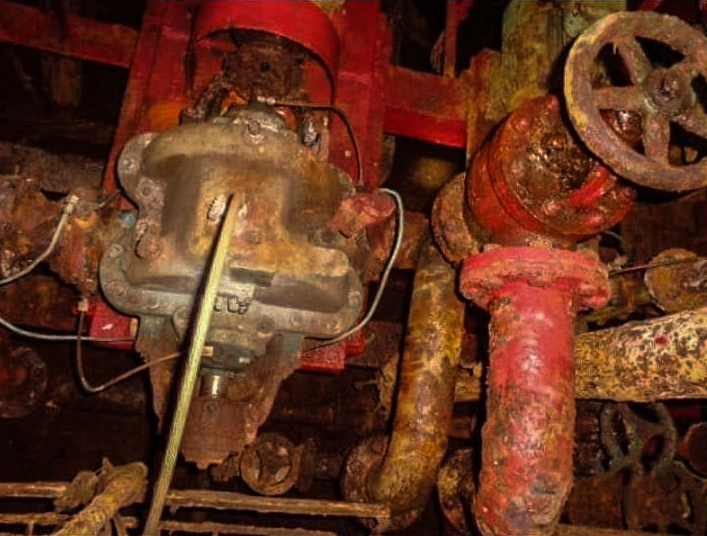 Oil tankers have inert-gas systems to prevent highly flammable gases that evaporate from the oil from igniting and exploding. The systems are usually serviced every three days. “The Safer’s inert-gas system was last serviced four years ago — it’s no longer functioning,” Soud said in an August 2020 webinar about the vessel. “Any spark or flame in the wrong place at the wrong time, especially if there’s a fracture anywhere in these tanks and they are leaking vapor, could cause a massive explosion.”

The U.N. has repeatedly pushed for permission to inspect the Safer and put together a plan to avert an oil spill or explosion. The Houthi administration formally agreed to a technical inspection in November 2020. But in February of this year it requested a review and still did not provide certain security assurances, without which the mission cannot be conducted safely and the budget would skyrocket, according to a U.N. statement.

The Houthi administration has hit back at allegations of stalling, emphasizing its “full commitment” to implementing the agreement. But talks deteriorated further across recent meetings. In a statement released June 1, following the latest meeting, the Houthi-led Supervisory Committee for the Implementation of the Agreement on Maintenance of the Safer expressed disappointment and accused the U.N. of breaking the November agreement and misspending funds. “We were surprised that the U.N. plan excluded most of the agreed urgent maintenance work,” the statement said.

Mohammed al-Houthi, a leading figure for the movement, previously tweeted outrage at a U.N. requirement for a secure zone around the Safer and other conditions he said are outside the original agreement.

“The United Nations and enemy states are responsible for any disastrous leakage from the Safer tanker,” he wrote yesterday, referencing the U.S., U.K., Saudi Arabia and United Arab Emirates, which support the internationally recognized government of Yemen in the civil war.

Describing the Safer as one of few bargaining chips held by the Houthis, Weir said they may be continuing to deny the U.N. access to increase leverage for their wider strategic aims. But this could backfire. “People will justifiably wonder why this no-brainer of a situation hasn’t been resolved when a catastrophic spill would leave none of the parties — least of all the Houthis — better off,” he said.

Even before the current breakdown in negotiations, the U.N.’s ability to fund a solution was waning. An inspection was to be paid for by the organization’s Yemen relief effort, which is just 34% funded by donors and will soon begin to run out, according to a May 12 U.N. Security Council briefing.

Seasonal variations in wind and current patterns would affect the outcome of any spill, according to Murray Purves, a senior consultant at U.K.-based risk management company Riskaware who contributed to a recent impact assessment of a potential Safer spill.

The predicted risk of oil contamination from the Safer should a spill occur between July and September. Image courtesy of Riskaware.

A spill would undoubtedly unleash further suffering on Yemenis already facing strife, starvation, internal displacement, and the COVID-19 pandemic. Toxic air pollution from a fire on the Safer between April and June could affect around 5.9 million people in Yemen and 1 million in Saudi Arabia, according to the assessment. If land became contaminated with toxic soot, up to 3.25 million farmers could suffer crop losses. Some 235,000 people associated with Yemen’s fishing industry could lose work in the event of a spill.

The coastline of Houthi-held Hudaydah governorate, where the Safer is anchored, is Yemen’s lifeline, with 70% of all imports and 80% of humanitarian aid arriving through three key ports there, according to the U.N. Office for the Coordination of Humanitarian affairs. A spill from the Safer would force their closure for up to three months, the impact assessment estimates, further increasing food insecurity in a nation where 66% of the population already requires humanitarian aid.

A strategy to transfer oil from the Safer to a more seaworthy ship to be left on site, proposed by I.R. Consilium, gained traction with the international community. But how to orchestrate this, with or without access permission from the Houthis, is a sticking point.

The Atlantic Council, a U.S. foreign policy think tank, published a post calling for a U.N.-led military solution. The Yemeni government, the U.K., France and Tunisia have also called for further steps. Other U.N. Security Council members have stressed the need for depoliticization of the issue and intensification of negotiations.

According to Weir, a military solution would be a “worrisome” and unprecedented move, as the U.N. has never directly addressed an environmental issue with the use of force, which would increase the risk of a serious environmental incident. Prior to the current impasse he told Mongabay he favored a cooperative approach, emphasizing the need for confidence building measures on both sides to facilitate a deal.

Even with access permission from the Houthis, a prospect that seems increasingly remote, an estimated month-long fuel offloading operation would require foreign military involvement to secure the area against potential attacks and clear it of sea mines, according to the Atlantic Council post, which Soud co-authored.

The International Maritime Organization (IMO), a U.N. agency charged with shipping security and pollution prevention, would be involved in environmental impact mitigation in the event of a large spill. “Investigations to date indicate a severely limited at sea response capability, and minimal capacity to protect sensitive sites along the coast,” an IMO spokesperson told Mongabay. The Yemeni government has set up an emergency committee to manage projected fallout from a spill, but it lacks sufficient resources to respond effectively to a significant release, according to the IMO.

International intervention is therefore crucial, the IMO spokesperson said, not only to averting a crisis, but to any disaster response effort should access negotiations remain deadlocked.

“I can only send the strongest possible signal to the authorities who are involved in the SAFER situation: Please remove this ticking environmental time-bomb as soon as it is humanly possible,” Meibom said. “It is unbearable to think of the meaningless damage it would cause if the SAFER leaks. And with time it will leak.”