by Shanna Hanbury on 2 September 2020

As the Amazon rainforest’s human-inflicted fire season advances — now counting nearly 700 major fires and half a million hectares  burned over the last three months — the risk to Indigenous territories is growing: 86% of major fires detected in Indigenous Territories this year happened in the last two weeks, according to satellite data analyzed by the Monitoring of the Andean Amazon Project (MAAP).

“Everyone is frightened and worried. Last year, the whole world watched as wildfires consumed the Amazon. This year, it’s looking even worse,” Sonia Guajajara, leader of the Brazil-based Association of Indigenous Peoples (APIB), told Mongabay.

Fifteen of the Brazilian Amazon’s 674 major fires detected this year between May 28 and September 2, have burned inside Indigenous territories, according to MAAP data, which counts major blazes and filters out smaller fires that may not have big consequences for the forest.

But even fires occurring outside of Indigenous territories have far-reaching consequences for Native peoples. The fires — following on the heels of the devastating COVID-19 pandemic that has claimed thousands of lives in Amazonia — produce heavy clouds of smoke that are disproportionately affecting Indigenous health. And for isolated Indigenous groups, fire is a direct threat to survival, wiping out their forest food sources, and in some cases, forcing them into contact with the modern world, and potentially, modern diseases to which they have little resistance.

Despite the rising wave of fires this year, Brazilian President Jair Bolsonaro continues to slash funds from IBAMA, Brazil’s environmental agency, responsible for preventing and fighting fires and from ICMBio, the nation’s national park service. After a US $22 million budget cut, a further US $11 million was temporarily blocked last week, threatening to halt all agency operations to combat Amazon fires and deforestation. The decision to block funds was quickly reversed, possibly in response to the outcry from NGOs and the media.

Bolsonaro’s administration is openly pushing to allow mining and agribusiness within Indigenous reserves and conservations units, has green-lighted illegal farms on Indigenous lands, and has without evidence blamed Indigenous communities, environmental NGOs, firefighters and even Leonardo di Caprio for Amazon fires.

In the Parabubure Indigenous Territory in the Brazilian State of Mato Grosso, major fires have burned at least 11,295 hectares (27,910 acres), an area twice the size of Manhattan Island in one week, threatening the Indigenous way of life, health and food security of its 3,819 residents in 48 villages.

“The fires are still going now, it’s out of control,” said Indiana Petsirei Ö Dumhiwe, an Indigenous leader who witnessed the wildfires last week; she is also a public servant at the National Indigenous Foundation (FUNAI), Brazil’s Indigenous affairs agency. “This is the first time a fire like this has happened here. The animals, the birds — we see them running away from the fire. It’s horrible. It affects our way of life and our survival.”

Some families came close to losing their homes as the flames came within meters of many villages, Dumhiwe told Mongabay. But despite the roaring fires, her people are on their own. “No one is helping us. There are only Indigenous people here working to put out the fire.”

Significant fires in protected areas make up just 5.5% of this year’s total, as these forested areas traditionally function as a shield against deforestation and retain the natural humid characteristics of a fire-suppressing rainforest that other degraded parts of the Amazon have already lost.

“Historically, Indigenous territories work as a barrier of protection against the advance of deforestation and forest fires, and are vital to impeding total destruction of the environment,” says Guajajara.

But even inside Indigenous territories that are totally without fire, there are dangerous impacts. Dense smoke from neighboring areas is carried by the wind in thick, toxic clouds, impacting the health, subsistence livelihoods and survival of residents. Last year’s Amazon fires blackened the skies and blotted out the sun as far away as São Paulo, Brazil’s largest city more than 2,000 miles from the blazes. Conditions are as bad or worse in parts of the Amazon this year.

In satellite imagery, major fires are often seen outlining Indigenous territories — with the characteristic fishbone pattern of access roads and new deforestation standing out along with bright red fire alert hot spots. This contrasts sharply with the lush green forests seen inside the protected boundaries of Indigenous reserves. That juxtaposition is no coincidence: most Amazon fires in Brazil are intentionally set, often by land grabbers, at the forest edge as a way of clearing away the rainforest and converting the land to valuable pasture and croplands.

The Indigenous situation right now is not unlike that of having your home right next to a neighbor’s house that is ablaze. Bitate Uru Eu Wau Wau lives in a small Indigenous village called Jamari in the heart of the Amazon rainforest, which is surrounded by a dark green sea of trees in the Brazilian state of Rondônia. MAAP has not detected any major fires in his territory. But the lands encircling his Indigenous green island are on fire.

For the last weeks, the fresh air of the forest has been supplanted by smoke from major blazes burning near the Uru-Eu-Wau-Wau Territory, harming the health of elderly people amid the COVID-19 pandemic that has already killed many across the Amazon basin.

“The fire is surrounding our land, and it’s only going to get worse. There are still months of fires ahead of us. You wake up in the morning and see clouds of smoke on the horizon,” Bitate Uru Eu Wau Wau told Mongabay. He is the coordinator of the Japaú Association that represents his people. “It has been a huge concern, especially since we have elderly people here with breathing difficulties. Indigenous people already have weaker immune systems. Add COVID and the smoke, and we’re even more vulnerable.”

On days with heavy smoke, Bitate recounts, an elder in his village can hardly breathe. “We keep a close eye on her in case the situation comes to worst.” These elders — the keepers of Indigenous culture in the Amazon — are especially valuable to their ethnic groups; their loss also brings the loss of long kept traditions and records handed down orally over the centuries.

Almost 80% of the total major fires this year are linked to recent deforestation, MAAP data shows, and these fires account for 80% of the particulate matter now contaminating thousands of Amazonian lungs.

From 2015 to 2019, the number of Indigenous people over 50 hospitalized with breathing difficulties doubled, according to a study by the Socio-environmental Institute (ISA), a Brazilian nonprofit. 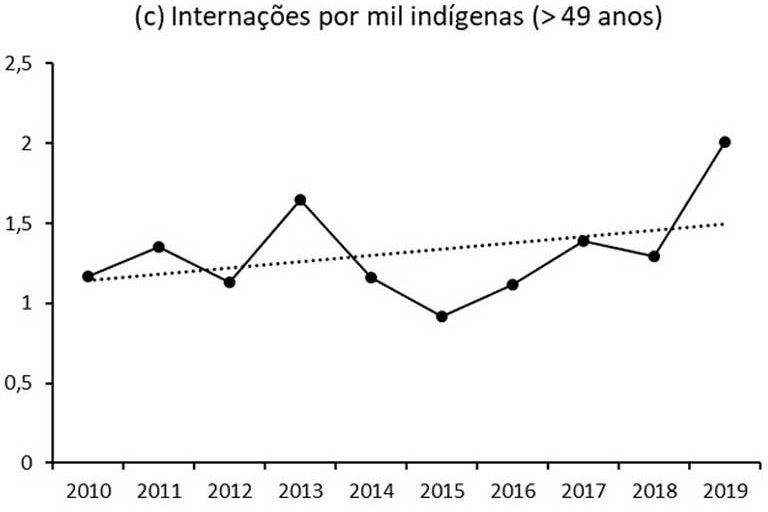 “After childbirth and pregnancy issues, respiratory issues are the leading cause for hospitalization among Indigenous people. With COVID-19 [rampant] this year, vulnerability will increase even more. They are the guardians of the forest, and are being neglected,” said Alana Almeida, an ecologist at INPE, the Brazilian National Institute for Space Research and a lead study author.

Data for 2020 is not yet available, but researchers fear that the COVID-19 pandemic, combined with the continued increase in fires and deforestation, will result in a far worse health crisis than last year, likely overwhelming the region’s already fragile public health system, already seriously undermined since Jair Bolsonaro came to power in January 2019.

“The data shows total abandon[ment] by the government in dealing with Indigenous issues and the complete inefficiency in combatting fires and deforestation,” Almeida said.

For isolated and uncontacted Indigenous groups — of which there are dozens still in the Amazon — smoke is the least of their problems. Fire in the rainforest is threatening the very survival of these hunter gatherer groups, according to a study published by the Indigenous-led organization Land is Life. Amazon fires kill plant and animal life that these roving bands depend on to survive, and without enough food, they may be forced to come into contact with Western society, risking exposure and death from disease.

“All of the isolated peoples are under threat by the fire,” said Atenor Vaz, an expert in isolated Indigenous groups who set up the Brazilian institutional protocols for isolated groups in the early 1990s, and the study’s lead author. “Whenever there are fires, there are more sightings of [roaming] isolated groups on river banks and close to other Indigenous villages.”

These Amazon isolated Indigenous groups are between a rock and a hard place, says Vaz. “They have been practicing social isolation for decades in order to prevent disease, much like what we are doing now with the COVID-19 pandemic,” he concludes. But “Their culture is entirely based on the forest. If it catches on fire, there is no one to help — there’s no salary, no fridge. Food sovereignty is drastically reduced.” Hungry and seeking food, the fire and smoke drives them from the forest, where the pandemic and other diseases await.

Banner image: The Kayapó Xikrin people of the Northern Amazon were affected by 2019’s infamous Fire Day. Researchers believe that the intense fires then were responsible for many of the hospitalizations due to respiratory problems last year. Photo taken in August 2019. Credit: Emilio Chong/Land is Life.