by Jenny Gonzales on 1 September 2020

In a move that aroused both consternation and confusion, the Jair Bolsonaro government’s Ministry of the Environment (MMA) last Friday at 4:58 PM canceled all funding to combat illegal deforestation and fires in the Amazon and the Pantanal biomes on the part of IBAMA, the nation’s environmental agency, and ICMBio, its national park service, citing budgetary constraints. The government fully reversed itself three hours later and restored the funding.

According to MMA’s original Friday announcement, it was cutting R $60 million (US $11.1 million) from IBAMA’s and ICMBio’s budgets at the behest of two government ministries — the Secretariat of Government/SEGOV (headed by General Luiz Eduardo Ramos), and the Civil House of the Presidency of the Republic (led by General Walter Braga Netto), with the decision communicated via the Ministry of the Economy (headed by Paulo Guedes).

However, that budgetary decision makes no sense from a purely financial point of view, according to an analyst questioned by Mongabay. Suely Araújo is a senior public policy specialist at the Climate Observatory (OC), a coalition of 52 Brazilian civil society organizations, and she is also a former president of IBAMA. Araújo says the administration’s justification for the announced cuts makes for a poor explanation.

“I do not believe that the announcement was made due to lack of money in the MMA,” said Araújo. “IBAMA’s most expensive contracts, which are for the rental of helicopters and vehicles [important for supporting deforestation inspections and firefighting efforts], are [already] paid [up] until April 2021 by the Amazon Fund [money mostly provided by Norway and Germany] and there is still more than R $60 million available,” said Araújo, who oversaw finalization of the contracts as the then head of the agency.

“In addition, IBAMA [was awarded] R $50 million [US $9.2 million] in a decision by the Supreme Federal Court (STF), [money allotted] for deforestation inspection and firefighting coming from the Lava Jato Operation [corruption investigation]. Of that total, the agency [has] only used R $13.7 million [US $2.5 million] so far.”

Araújo also explained that R $1.5 billion (US $277 million) remains in the Amazon Fund account — there since January 2019 when Bolsonaro took office. Shortly after that, Environment Minister Ricardo Salles dissolved the two Fund committees made up of state government officials and civil society representatives who determine guidelines and criteria for spending the money. Salles froze the funding, claiming — without proof — that there were irregularities in NGO contracts to help curb deforestation. The minister’s attempt to recreate the committees by controlling their membership was rejected by Norway and Germany, key Amazon Fund donors.

“The same minister that says there is no money left, [leaves] R $1.5 billion [in the budget unspent and] without use since January 2019?” questioned the former IBAMA president. “To me, the [Friday] announcement was political theater [so that] Salles could be strengthened in the government.” Salles has increasingly been criticized for his anti-environmental policies, though President Jair Bolsonaro has defended him.

Even as the government found the need to strip IBAMA and ICMBio of funding to fight deforestation, it spent lavishly elsewhere. In July, the Environment Ministry announced that it had quadrupled the payment of remunerations in 2019 — totaling R $29 million (US $5.3 million — to landowners who have laid claim to lands within federal protected areas. This year the MMA predicts such payment, some likely going to land grabbers, could top R $50 million (US $9.2 million).

Shortly after Friday’s MMA publication, Hamilton Mourão, vice president of the Republic and head of the recently formed Amazon Council, declared that Salles and MMA were hasty in announcing the suspension of operations in the Amazon and Pantanal biomes.

“The government is looking for resources to be able to pay out emergency aid [during the COVID-19 pandemic]. So it is taking resources from all ministries,” explained Mourão. But “Minister Salles rushed [to contribute to the social aid package] and the R $60 million [shared] between IBAMA and ICMBio will not be blocked.”

The head of the Amazon Council was referring to President Bolsonaro’s decision to extend pandemic temporary income assistance to the unemployed and informal workers until 2021. The implementation of that financial aid package has resulted in an increase in popularity for Bolsonaro who is already setting his sights on winning the 2022 election.

Araújo, however, was not convinced by the Vice President’s explanation: “Governments are relatively coordinated; when there is a resolution it is communicated in advance. A sum of R $60 million is very little for the Ministry of Economy, it would not make any difference. It is [equivalent to just] a month of GLO [the Guarantee of Law and Order],” spent by the Armed Forces assigned to protect the Amazon by Bolsonaro in May.

Salles, in response to Mourão’s public criticism, countered: “It is not true [that I rushed to announce the blocking of resources. [The funding] was already blocked and they unlocked it now. They unlocked it after the note [from the MMA],” he said.

Bolsonaro did not comment on the confused episode, but the next day, his son Eduardo, a federal House deputy and staunch supporter of the president, praised the “good job that Minister Ricardo Salles has been doing at the Ministry of the Environment.”

Climate Observatory Executive Secretary Marcio Astrini commented on the gravity of the MMA announcement, and the immediate government retreat. “It was not a budgetary problem, [because] the money [suddenly became available again] 15 minutes after Minister Salles gave his declaration, which means that [the environment minister] clung to any excuse [in order] to declare that he purposefully wanted to suspend [deforestation] inspections and the fight against fires. This is absurdly irresponsible and can only come from a person who does not have the slightest concern for the country and the ministry he runs.”

No matter the reasons, last Friday’s decision, and its immediate reversal, leaves experts scratching their heads. The first scenario, putting a stop to IBAMA and ICMBio operations, had it been carried out, would have potentially been apocalyptic for the environment, said Astrini. Instead, the government retracted the funding cuts, leaving things as they were — in an extremely bad position where the administration is not dealing effectively with either the deforestation or fires in the Amazon and Pantanal.

“At no point in all of this [artificially] created situation, [did] the government address the main question, which is how to solve the problem of the environment in Brazil, [especially] how to solve the deforestation problem. We are always in the same discussion, whether we are going to be in a very bad situation, or if we are heading into an apocalyptical one,” concluded Astrini.

Friday’s political drama unfolded amid devastating scenes in both the biomes. The Amazon rainforest suffered a 34% increase in deforestation between August 2019 and July 2020, according to INPE (the National Institute for Space Research). Today, INPE released data for the month of August, showing 29,307 hot spots, the second highest number in the last ten years, and just 5% below the 30,900 fire spots of 2019. Hot spots include all fires in the Amazon, ranging from forest fires, to fires set by land grabbers, and fires lit to clear field stubble. By another accounting system, more than 500 major fires were burning in the Amazon as of last week, most of them illegal. 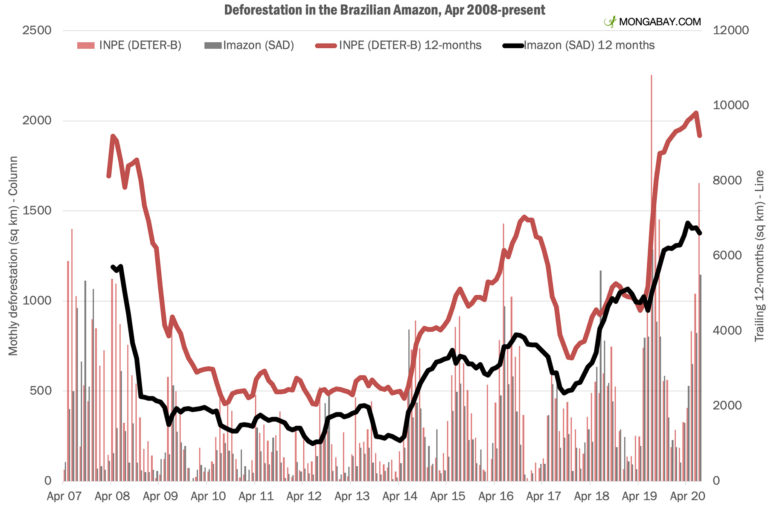