Decade after BP Deepwater Horizon spill, oil drilling is as dangerous as ever

It was one of the worst environmental disasters the world has witnessed. Ten years ago, on April 20, 2010, the BP Deepwater Horizon exploratory rig exploded, killing 11 people and initiating the largest oil spill in the history of the United States.

Millions of gallons of oil spewed into the Gulf of Mexico, killing fish, dolphins, crabs, sea turtles, birds, and countless other marine, wetland and coastal plants and animals.

When the leak was finally contained, 87 days later, an estimated 4.9 million barrels (480,000 cubic meters, or 210 million gallons) of oil had spilled, reaching 2,100 kilometers (1,300 miles) of shoreline and causing untold damage to the Gulf Coast region.

A newly published report by Oceana, Inc., a nonprofit dedicated to protecting oceans, looks back at how this spill happened, the resulting ecological and economic impacts, and if this catastrophe has changed government or oil industry approaches to offshore drilling.

Poor government oversight and inadequate safety culture paved the way for the BP Deepwater Horizon explosion. Now, a decade later, it appears these conditions, the prerequisites for disaster, have not improved.

“Offshore drilling is still as dirty and dangerous as it was 10 years ago,” said Diane Hoskins, Oceana campaign director.

The U.S. government estimates that as much as 1.4 million barrels (227,000 m3, or 60 million gallons) of oil still remain in the Gulf of Mexico, and that the total economic damages have surpassed $1 billion. One study estimates the damage done to the Gulf of Mexico’s natural resources are around $17.2 billion. Both the oil and the removal efforts had negative effects on the health of workers and coastal communities. Marine ecosystems have yet to fully recover. 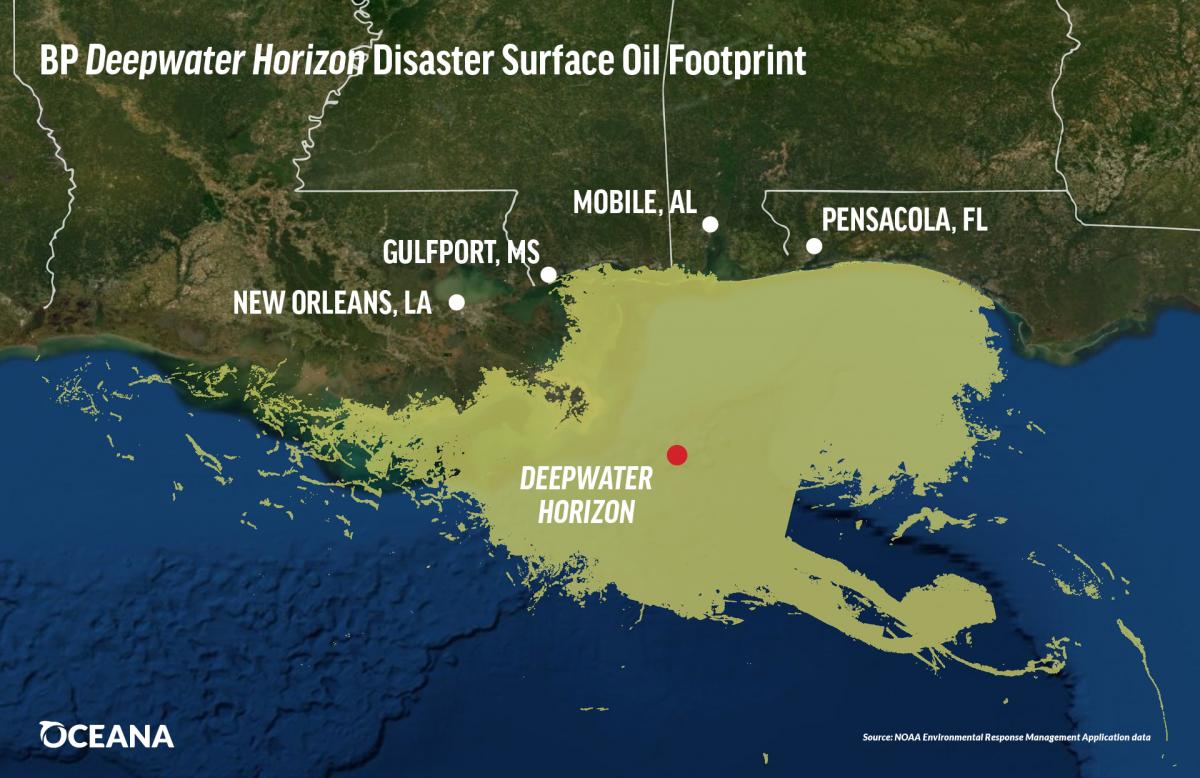 “It was an entire Gulf of Mexico-wide event,” Tracey Sutton of Nova Southeastern University said. “Nobody was ready for this scale of pollution … As far as we know, the actual impact of the spill is not over yet.”

The spill launched what is recognized as the longest marine mammal die-off in the Gulf of Mexico. For five years after the spill, 75% of all dolphin pregnancies failed in the affected areas. In the first few months of 2011, 186 bottlenose dolphins (Tursiops truncatus) were found dead, nearly half of these were perinatal, or near birth.  The population of one of the most endangered whale species in the world, the Gulf of Mexico Bryde’s whale (Balaenoptera edeni), was reduced by 22%.

More than 600 sea turtles were found dead, three-quarters of them Kemp’s ridley turtles (Lepidochelys kempii), classified as critically endangered on the IUCN Red List. Scientists estimated that 170,000 sea turtles have died as a result of the oil spill and oil spill cleanup efforts.

An estimated 800,000 birds, 8.3 million oysters and trillions of larval fish and invertebrates were also killed.

Much of the oil from the spill settled on the ocean floor. Large expanses of the ocean floor surrounding the BP Deepwater Horizon oil rig have been described as empty and void of life.

“The fact that you don’t see it [oil] on the beaches, or you don’t see it floating around … doesn’t mean that it’s gone,” Clifton Nunnally, a research scientist with the Louisiana Universities Marine Consortium (LUMCON), who has been studying the Gulf of Mexico for 20 years, said in the Oceana report. “It means that it’s moved to a new ecosystem. And it’s a system that operates on the order of millennia, not just years or decades. So, the recovery for a deep-sea ecosystem like this could be a long-term process.”

More than 100,000 people were involved in containing and cleaning up the spill. Many of them were exposed to crude oil, which is toxic.  The chemical dispersants used to clean up the oil also resulted in respiratory, skin and eye problems for exposed workers. According to one study, oil spill cleanup workers had heart issues and blood disorders seven years after exposure.

Communities of color were particularly hard hit, “as these experience systemic oppression such as environmental racism,” according to an NAACP report. These coastal communities were still recovering from Hurricane Katrina in 2005, the costliest tropical cycle on record, and this new disaster struck a hard blow for people who “already suffered from compromised economic status, displacement and substandard housing, fragile mental and physical health status, and socio-cultural disruption.”

“They failed our people,” Clarice Friloux, the outreach coordinator for the United Houma Nation during the spill, told Oceana. “At one point, I remember thinking, ‘Wow, this could kill off the whole generation of Native Americans living off the coast of Louisiana.’”

In 2016, the court approved an $8.8 billion settlement with BP to trustees including, federal agencies, states and Indian tribes, for natural resource injuries connected to the Deepwater Horizon oil spill.

Hundreds of spills still occur in U.S. waters every year. The oil pipelines in place in the Gulf of Mexico alone could circle the Earth. 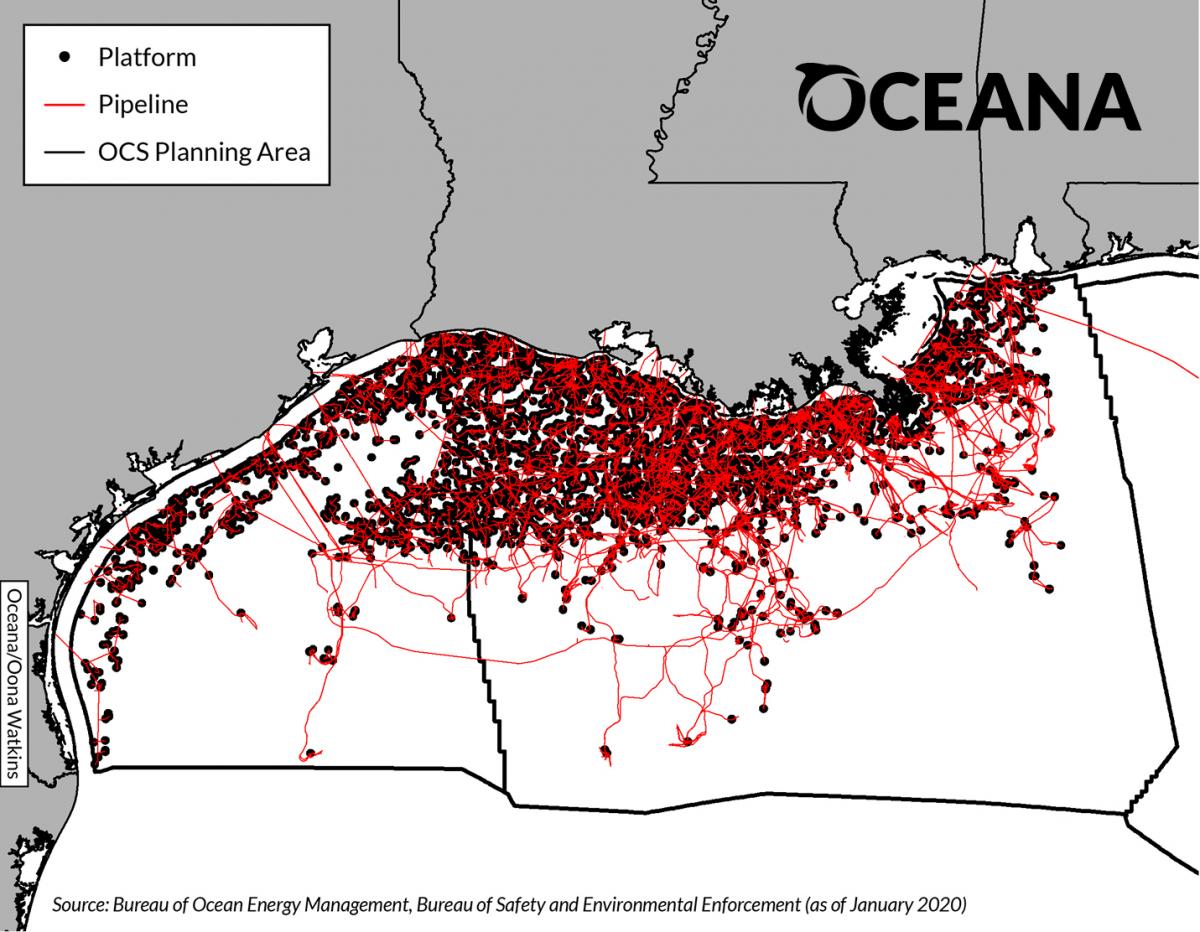 “If anything, another disaster is more likely today as the oil industry drills deeper and farther offshore,” Hoskins said. “Instead of learning lessons from the BP disaster, President Trump is proposing to radically expand offshore drilling, while dismantling the few protections put in place as a result of the catastrophic blowout.”

The Trump administration has rolled back regulations on offshore drilling. The changes, described by the U.S. Bureau of Safety and Environmental Enforcement as “amending, revising, or removing current regulatory provisions that create unnecessary burdens on stakeholders,” lessen the testing requirements for blowout preventers. A blowout preventer malfunction is cited as the cause of the BP Deepwater Horizon oil spill.

Oceana has made several recommendations to the current U.S. administration, including urging Trump to halt efforts to expand offshore drilling, seek transformative change in the culture of safety in the industry, and to deny pending seismic permits for oil and gas. They recommend that congress put in place a moratorium on offshore drilling expansion and incentivize renewable energy.

“I saw firsthand the devastation, whether it was loss of livelihood, loss of culture, loss of land, health. We saw it and lived it on a daily basis,” said Brenda Dardar Robichaux, former principal chief of United Houma Nation. “The fact that BP could come in and do this to a community and really not suffer any consequences was just criminal.”

Liz Kimbrough is a staff writer for Mongabay. Find her on Twitter:  @lizkimbrough_