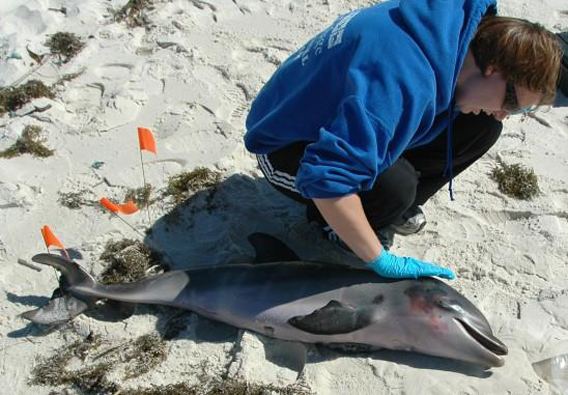 Researcher with dead dolphin calf. Photo courtesy of the University of Central Florida.

In the first four months of 2011, 186 bottlenose dolphins (Tursiops truncatus) were found dead in the Gulf of Mexico, nearly half of them dolphin calves many of whom were perinatal, or near birth. Researchers now believe a number of factors may have killed the animals. Writing in the open-access journal PLoS ONE, scientists theorize that the dolphins died a sudden influx of freshwater from snowmelt after being stressed and weakened by an abnormally cold winter and the impacts of the BP oil spill.

According to researchers, oil leaking from the BP-leased Deepwater Horizon could have decimated the dolphin’s prey base, leaving a larger than usual number of dolphins suffering from malnutrition.

“Declines in planktivorous fishes over the shelf in summer and fall 2010 and evidence of genetic and physiological impairment of nearshore fishes support the hypothesis that bottlenose dolphins’ forage base may have been reduced,” the scientists write.

An harsh winter along the Gulf likely worsened matters. Then came high volumes of freshwater snowmelt into the Gulf of Mexico, which was the last straw for many dolphins and their calves, according to the paper.

“Unfortunately it was a ‘perfect storm’ that led to the dolphin deaths,” explains co-author Graham Worthy in a press release. “The oil spill and cold winter of 2010 had already put significant stress on their food resources, resulting in poor body condition and depressed immune response. It appears the high volumes of cold freshwater coming from snowmelt water that pushed through Mobile Bay and Mississippi Sound in 2011 was the final blow.”

However, the study argues that the dolphins would likely have survived the freshwater snow melt influx, if they weren’t already stressed and in poor condition. The question remains: just how responsible was the oil spill for the dolphins’ deteriorated health?

Bottlenose dolphins are listed as Least Concern by the IUCN Red List with a global population of over 600,000.

(04/24/2012) Two years after the BP-leased Deepwater Horizon drilling rig exploded in the Gulf of Mexico, killing eleven and causing an oil spill that lasted three months, scientists say the impacts on the Gulf ecosystem are only beginning to come to light and the discoveries aren’t pretty.

(09/28/2011) Oil pollution doesn’t have to kill fish to have a long-term impact, according to a recent study in the Proceedings of the National Academy of Sciences (PNAS). Researchers found that Gulf killifish (Fundulus grandis) that had been exposed to very low to non-detectable levels of oil contamination from the Deepwater oil spill last year, still showed developmental problems that are likely to impact fish populations for decades to come.

(03/22/2011) Yesterday the US Bureau of Ocean Energy Management, Regulation and Enforcement awarded Royal Dutch Shell PLC the first deep-water exploration permit since the BP disaster last year, which sent some 4.9 million barrels of oil and up to 500,000 tons of methane into the Gulf of Mexico over three months.

(02/28/2011) Every year a few baby dolphins in the Gulf don’t make it and are found on the shores of the Gulf, but this year something is different. To date, 24 baby dolphins have been found dead in Alabama and Georgia, some are stillborn, others aborted fetuses. Researchers, who say death-toll is ten times the average, are currently studying the dead porpoises for clues to cause. These could include colder-than-average waters, algal blooms, disease, or the incident in the back of everyone’s mind: the BP oil spill last year.

(02/21/2011) Samantha Joye of the University of Georgia has seen the bottom of the Gulf of Mexico and the view wasn’t pretty. Speaking at the American Association for the Advancement of Science, Joye told the conference that she found places where oil lay on the Gulf floor nearly 4 inches (10 centimeters) thick. Joye’s findings contradict rosier pictures of the overall damage caused by the 2010 BP oil spill, including a recent statement by Kenneth Feinberg, the US government czar for oil compensation, that the Gulf would largely recover by next year.