What happened to the oil from the Deepwater Horizon disaster? 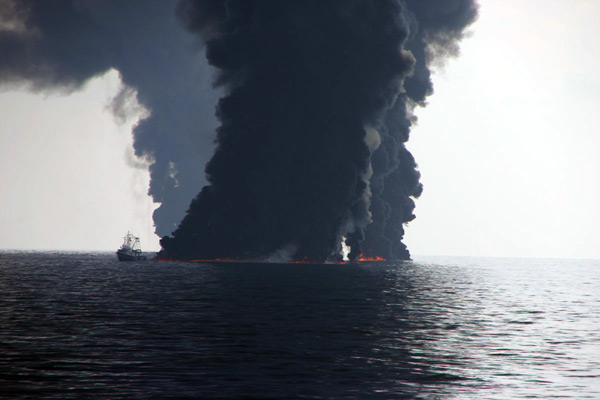 A controlled burning of Macondo well oil from the Deepwater Horizon disaster that rose to the ocean surface. [Credit: David Valentine]

Images from the 2010 Deepwater Horizon disaster endure, from the collapsing platform to oil-fouled coastline. But beneath the surface is a story photographers cannot as easily capture.

Two days after the April 20, 2010 explosion that killed 11 and injured 16, the Deepwater Horizon oil rig sank. During the five months it took to seal the Macondo well 1,500 meters below the surface, nearly 5 million barrels of oil gushed into the ocean. In a paper published online on Oct. 27 in the Proceedings of the National Academy of Sciences (PNAS), researchers reported the first solid evidence that some of this oil settled on the seafloor.

“We have placed one more piece of the jigsaw puzzle,” said geochemist David Valentine, leader of the team of scientists from the University of California, Santa Barbara and the Woods Hole Oceanographic Institution. Valentine and his colleagues analyzed more than 500 seafloor sediment cores collected from sites around the Macondo well by the U.S. National Oceanic and Atmospheric Administration.

The team detected the chemical hopane from cores across an area of nearly 3,200 square kilometers. “Hopane is just one of the many compounds in oil from the Macondo well,” biologist Sarah Bagby, a member of Valentine’s team, told mongabay.com. Since it degrades slowly, it is a useful indicator of oil contamination, she added.

“This is the first time [scientists] showed that liquid oil or its byproducts settled on the seafloor,” environmental engineer Scott Socolofsky of Texas A&M University, who was not a member of Valentine’s team, told mongabay.com.

Hopane levels were highest in sites closest to the Macondo well and west of it, corresponding to ocean current patterns during and after the disaster. The oil in the seafloor sediment cores probably sank without ever rising to the surface, since it did not show the telltale signs of decay from air exposure. Valentine and his team concluded that the seafloor oil most likely came from the 2 million barrels that had become trapped between layers of deep ocean waters, which Socolofsky had previously helped to track.

“Oil trapped in the deep ocean from this event fell to the seafloor, like a light mist settling over approximately [3,200 square kilometers],” Valentine told mongabay.com.

Scientists had hoped much of the oil trapped in the water would eventually disperse so bacteria could break it down. Instead, by Valentine’s estimates of hopane distribution, between 4 and 30 percent of the Deepwater Horizon oil now rests on the seafloor. “The research community is still trying to figure out what the impacts of this particular spill will be,” said Bagby. 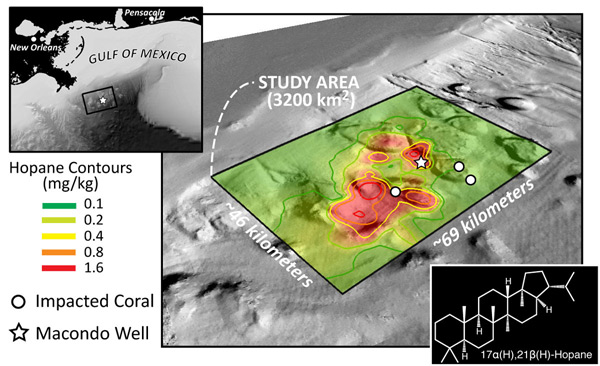 Based on their analyses of seafloor core samples around the Macondo well (white star), Valentine and his colleagues mapped hopane contamination across a nearly 3,200 square kilometer region of seafloor. At least one coral reef (white circle) lies within the region of higher oil contamination. Click image to enlarge. [Credit: G. Burch Fisher]

The settled oil will likely take longer to be broken down by oil-eating microbes, especially if it becomes buried beneath layers of sediment. “The more you can dissolve [the oil] into the water column, the better and faster this degradation process gets,” explained Socolofsky. “But on the seafloor, it can stay awhile.”

In April 2014, Deepwater Horizon operator BP touted its recovery efforts in the Gulf of Mexico. However, the U.S. Coast Guard felt compelled to warn that restoring the Gulf and its ecosystems is far from over. Valentine and his team now plan to study how the different components of oil break down on the seafloor. Their findings are a sobering reminder that scientists do not yet know the full consequences of the Deepwater Horizon catastrophe.

James Urton is a graduate student in the Science Communication Program at the University of California, Santa Cruz.