Can conservationists overcome their differences to save life on Earth?

The series explores how the world’s biggest conservation groups have embraced a human-centric approach known as “new conservation” that has split the field over how best to save life on Earth. It also investigates the role of big money in pushing conservation agendas, and the field’s changing relationship with people living in areas targeted for conservation.

You can join the conversation in the comments, on Facebook, or by submitting your response for possible publication on Mongabay.

Part 1: Has big conservation gone astray?
April 26, 2016
The world’s biggest conservation groups have embraced a human-centric approach known as “new conservation.” But is it up to the task of saving life on Earth?

Part 3: Conservation today, the old-fashioned way
May 10, 2016
Despite the widespread embrace of a philosophy dubbed “new conservation” that focuses on human needs and economics, numerous conservationists remain focused on traditional methods to protect important places and creatures. Can they survive in an age that is asking them to be all things to all people and creatures?

Part 4: Conservation’s people problem
May 17, 2016
The field of conservation has faced down an internal crisis over is its treatment of indigenous peoples and local communities living in ecosystems targeted for protection. Conservationists now often engage these groups in a spirit of partnership — but there is still much work to do. 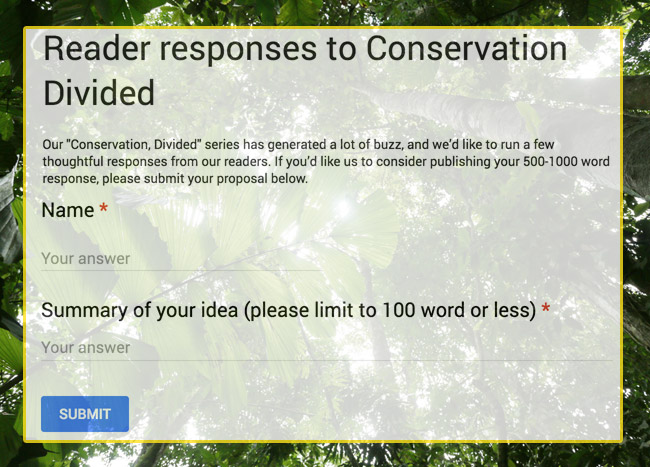