Human-caused changes to our biosphere—the global total of the world’s ecosystems—are now so great and alarmingly rapid that human lives and societies undoubtedly face epic challenges in the near future as our biosphere deteriorates, planetary boundaries are reached, and tipping points exceeded. We may survive, we may painfully adapt, but it is a fair bet that grave hardship, loss, and sacrifice lay ahead. The nature and extent of impacts among human populations hinges on how successfully we respond to the biosphere crisis with extraordinary leadership, balanced solutions applied at global scales, and unprecedented cooperation—or not.

Human-transformed ecosystems and technological fixes simply cannot replace the role of robust, complex, and interconnected natural ecosystems in maintaining the biosphere’s favorable conditions. For this critical reason, any viable response to the global environmental crisis must greatly expand the level of protection currently afforded to wild life and wild places through monumental conservation action. Five global-scale conservation actions are priority.

Somewhere in the range of forty percent of our planet’s surface needs to be more “natural” than “developed” (or “heavily exploited”), balanced between the terrestrial (~26% of the planet’s surface with ice caps covering ~2.6% ; 50% of the land recommended managed as “natural” to achieve biodiversity and biosphere function goals), freshwater (~2.75% of the surface; ~50%+ managed as “natural”), and marine realms (~71% of the Earth’s surface; ~33% of seas managed as “natural”). A half is likely impractical given current human abundance, explosive increase (a 40% increase by 2050 is projected), ubiquitous distribution, exploitative efficiency, and sky-rocketing resource demands. But oft-deliberated protection goals near 10% will inevitably fail to sustain biospheric processes or conserve much at all of the Earth’s complex tapestry of diverse life forms. 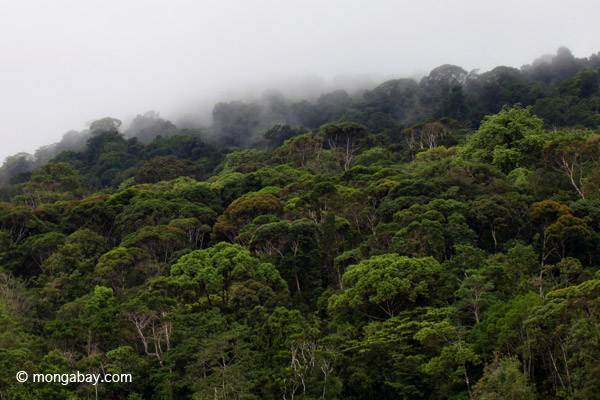 Rain forest of Isla Gorgona off Colombia. Photo by: Rhett A. Butler.

At least a third of all seas and coastlines require strict protection, even on the high seas where reserves should shift to track dynamic productivity hotspots and wildlife aggregations. Restoring resilient marine ecologies and balanced fisheries will require no-take Marine Protected Area (MPAs) networks protecting at least a quarter of all coastlines along continents, archipelagos, and islands, coral reefs, and trawling bottoms (shallow water benthic habitats) around the world. All remaining natural habitat on land must receive long-term protection and restoration, with an initial emphasis on larger, well-connected natural landscapes, remaining habitat in biodiversity hotspots, and vanishing habitat types and biomes. Restoration on land and expanded reserves will be necessary to reach the goal of a half of the Earth’s land surface in “natural” condition.

It is imperative to protect all old-growth habitats, whether they be unlogged forests, ungrazed deserts, untrawled seafloor, or unfished seamounts, as these remnants are ancient repositories of rich and vulnerable biodiversity and optimal arenas for life-sustaining processes. A bet-hedging strategy to assist as many terrestrial species as possible to persist in the face of changing climates is to protect larger natural landscapes that encompass diverse habitats, complex landforms, and strong environmental gradients; and emphasize protection of habitats that can function as climate microrefugia (for example, old-growth forests, shady slopes, riparian habitats) for local adaptation and persistence of vulnerable species.

All commercial harvesting of larger marine species (for example, cetaceans, sharks, giant clams, billfish, groupers, Bluefin tuna) should be banned for several decades to allow species and populations (and fisheries) to rebound and regain their ecological roles. A range of species with foundational roles in ecosystems, such as pollock, squid, clupeids (fish like sardines, anchovies, herring), and krill, will inevitably require a generous level of protection to sustain fisheries and associated marine communities.

All international trade in vulnerable and threatened wildlife―large and small, terrestrial and aquatic, plant or animal, edible or inedible―must be immediately halted to stem the global hemorrhaging of wildlife populations and biodiversity that is leaving us a very lonely and dysfunctional planet. Vulnerable species require strict protection everywhere, whether they are traded or not.

Healthy rivers must flow again accomplished, in large part, by the worldwide removal of obsolete and poorly-considered dams and barrages coupled with the restoration of riparian, wetland, and headwater habitats at watershed scales.

Compounds that damage the Earth’s fragile and essential ozone layer must be immediately banned and we must strive towards good progress in reining-in greenhouse gas production.

These five actions may seem dauntingly ambitious, yet they are all achievable by a committed global community within the next two to four decades, which is very likely our window of opportunity to avert biospheric disaster. Global programs empowered by the support and compliance of all nations and people have to be rapidly organized and funded to put in place a functional biosphere stewardship program and manage it into the future, vigilant against crimes against the Earth, co-option by economic interests, bureaucratic quicksands, and misguided nationalism. Grueling necessity will inevitably spur a measured or panicked response from an increasingly desperate humanity. We should have a good plan ready when that happens. 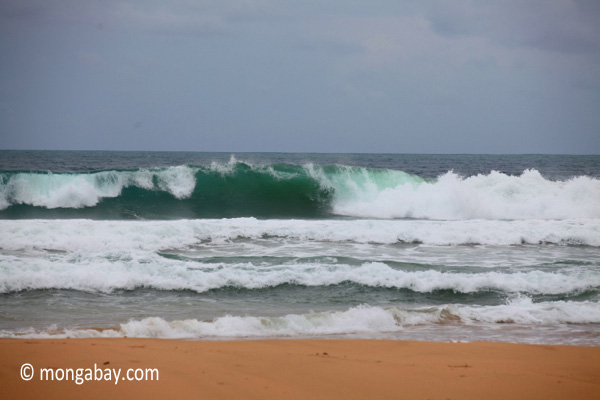 Waves on coastal Java. Photo by: Rhett A. Butler.

David Olson is a conservation biologist with Conservation Earth Consulting, Los Angeles, California. He can be reached at conservationearth (at) live.com

Climate Myths: how climate denialists are getting away with bad science

(04/29/2013) In Climate Myths: The Campaign Against Climate Science, Dr. John J. Berger deconstructs the climate change denialists’ myths in simple, easy-to-read terms. According to the Pew Research Center: “Nearly seven-in-ten (69%) [Americans] say there is solid evidence that the earth’s average temperature has been getting warmer over the past few decades, up six points since November 2011 and 12 points since 2009.” Yet implementing national-level climate change mitigation legislation is not occurring in the U.S.