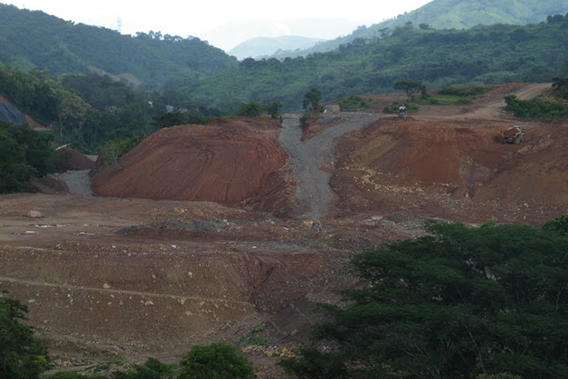 A Ngäbe indigenous Panamanian, Onesimo Rodriguez, opposing the Barro Blanco hydroelectric dam project was killed last Friday evening by four masked men. His body was then thrown into a nearby stream where it was discovered the following day.

Onesimo Rodriguez was attacked with a companion in Las Nubes, after they had attended a demonstration in Cerro Punta, Bugaba, against the dam. His companion, whose identity is being withheld for security reasons, received serious injuries but managed to escape and is having his injuries tended to by the local indigenous community. The M-10 (Movimento 10 de Abril) indigenous protest movement had announced in a recent press release that they held the Dutch Government and partner banks, FMO and DEG, “responsible for the social and environmental impacts, the impacts to Indigenous peoples’ rights, and the repression that the people are suffering from the Panamanian government” as a result of the dam.

Local environmentalist and indigenous protests against the Dutch and German supported dam have re-started in recent weeks, as the project has continued despite a long-awaited United Nations report finding in favor of the indigenous community on the illegality of the dam. Already construction has advanced far enough to raise the water level of the Tabasara River, threatening to flood Ngäbe lands and villages when expected rains arrive in three months. These same communities will be drowned beneath a 258 hectare reservoir if the dam is completed.

Earlier this month, indigenous protestors blocked access to the construction site on before being dispersed with tear gas. Then, on Tuesday 19 March 2013, an estimated 150 Police descended on a vigil of 30 protestors at at Vigui, close to the dam, firing bird shot, rubber bullets, and tear gas. The protestors fled into the surrounding hills.

The dam project was a central grievance in the indigenous protests which closed the Pan-American Highway in 2012. The government ordered the police to clear the protests, which they achieved using live ammunition—killing three and allegedly raping male and female protestors. Those protests resulted in Peace Accords under which the impact of the Barro Blanco project would be reviewed by a United Nations fact-finding team. The resulting United Nations report found against dam company GENISA and their financial backers, FMO (Dutch national investment bank) and DEG (German private investment bank), by confirming that the projected reservoir will drown land and villages of the Ngäbe.

The affected indigenous territory is an annex of the Ngäbe-Buglé Comarca, protected under the country’s Constitution and additionally by international commitments on indigenous rights signed by Panama (as well as, unusually for a European state, the Netherlands). Indigenous people can only be deprived of their territories by free, prior, and informed consent—a condition not met by Barro Blanco as the threatened indigenous communities of Nuevo Palomar and Kia have steadfastly refused to cease their opposition to the project. The wooden houses of the Ngäbes living along the Tabasara River are painted with the slogan “No a la Represa!”— “No to the Dam!” expressions made consistently to both public and international authorities.

The killing of Onesimo Rodriguez calls into question the conduct of FMO and DEG banks for continuing to support the dam. Dam-builder, GENISA, has already been forced to cancel its application for funding from the European Investment Bank (EIB) once it learned that the EIB was planning to visit the affected communities. However, GENISA and the FMO defend themselves by pointing to the agreement of the local regional council—the regional Congress of Kadriri —to support the project in return for a payment of $45,000 to the Congress, a vote that M-10 members say was secured with private payments to attendees.

GENISA argues that consent was given by circulating photos of M-10 leaders speaking against the dam at a company presentation in the (non-indigenous) town of Tolé in February 2008, without adding that the indigenous were never invited to this event and only learned of it through a chance encounter. On arrival they were initially denied entry, and then threatened with police action by the mayor of the town.
GENISA also circulates photos of a tripartite meeting between the M-10, GENISA and the Government. The M-10 were offered a payment of 2 cents per square meter of their land (a cent less than what was allegedly offered to non-indigenous land-owners affected by the project),
and warned that if they refused the offer their land would be appropriated.

When asked how FMO had concluded that they had the consent of the affected indigenous people—given the apparently unanimous opposition that was voiced to journalists exploring the Tabasara Valley—spokesman Paul Hartogsveld said they had “assigned independent experts to monitor the project.” He refused to divulge the identity of the consultancy, but said FMO´s decision to finance is partly based on their research and partly on that of such experts. FMO´s independent expert, and that of DEG, is Mauricio Inostroza of the Hatch consultancy. When asked whether he would be advising DEG and FMO that the indigenous inhabitants of the Tabasara Valley had withheld their free, prior and informed consent to Barro Blanco, he responded: “We have not been retained to speak to the media on behalf of our client, DEG & FMO. Our mandate is to provide technical expertise in case IFC Standards, to the development of Panama’s Barro Blanco Hydroelectric project. We suggest you contact DEG & FMO for comment.”

The dam has united local environmentalists and indigenous activists: environmentalists voice dismay that an indigenous population living by forest agriculture and fishing will be displaced by a methane-emitting reservoir. The Tabasara rain frog (Craugastor tabasarae), unique to the valley and currently considered Critically Endangered, will also be threatened by the development.

As well as destroying forest and villages, the reservoir will drown boulders covered with petroglyphs important to the Ngäbe culture, and drown a culturally-important zapoté tree in Kia. Beneath this tree a praying villager received what he understood to be the meaning of three letters of ancient script carved into the rocks of the Comarca. For the Ngäbe people, the message appeared to fulfill a prophecy of the indigenous Mamatata religion, whose prophet Adelia Atencio had claimed that whoever followed and obeyed God would come to understand, read and write the script engraved on the stones of their territory. With an understanding of the three petroglyphs, local communities deduced the meaning of the remainder, and the villager now hosts a school teaching the indigenous Ngäbere language through the re-born alphabet. But the school will also be drowned by the reservoir.

Hydroelectric dams have proliferated in Panama in response to the UN’s cap and trade carbon trading scheme and energy speculation following the completion of the Mesoamerican electricity grid, but the failure of dam projects to gain, or even seek, the necessary support of those affected by them has built up firm opposition to hydropower. Panamanian environmental NGO the Alliance for Conservation and
Development(ACD) lodged a 2008 appeal to the Inter-American Human Rights Commission against the Chan-75 dam in Bocas del Toro province, arguing that it violated national and international law by not seeking the free, prior and informed consent of the indigenous people who would be displaced.

The Panamanian government ignored the Commission’s subsequent suspension order on dam construction. When the case reached the Inter-American Court, the government successfully argued that the project would not negatively impact any communities as it had already been completed. Chan-75 recently made the news when an Al-Jazeera film crew filmed the government flooding the valley without informing the indigenous inhabitants. ACD Director Osvaldo Jordan concludes that while the hydro companies like AES try to sell “the idea that it’s clean energy and that it contributes to mitigating climate change…” many people are “more and more suspicious of the whole hydro lobby.”
Back in late 2012, as frustration rose with the ongoing construction of the dam, M-10 President Italo Jimenez had announced: “Our community sends a message to the world: the Dutch and German banks have been sent letters by us, but the world will eventually find out about us when we are beaten or massacred.”

His concern is shared by Panamanian lawyer Felix Wing, who leads the case calling for suspension of the dam’s construction, says: “the police have reacted with more violence against indigenous peoples, for instance during the [2012] demonstrations, than they would against other groups.”

For its part, FMO claims to finance entrepreneurs from developing countries in the belief that “a thriving private sector fuels economic and social progress,” but many may ask what progress may be achieved without first settling the legal challenges to their investments. 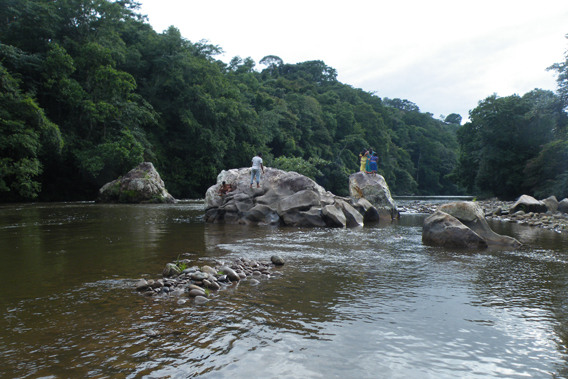 Ngabe on boulders containing petroglyphs, in the Tabasara River. The boulders will be drowned by the dam. Photo courtesy of Robin Oisín Llewellyn.

(03/19/2013) The National Coordinator of Indigenous Peoples in Panama (COONAPIP) has announced it is withdrawing from the United Nation’s REDD+ program following a series of disagreements. The exit of COONAPIP from the negotiating table with UN officials and the Panamanian government will likely be a blow to the legitimacy of REDD+ in the central American country. REDD, or Reducing Emissions from Deforestation and Degradation, is a program to reduce emissions by safeguarding forests.

(12/18/2012) Two Latin American companies have won the WWF Switzerland Tropical Forest Challenge, a competition that aims to highlight and support for-profit entities that have a positive impact on conserving tropical forests.

(05/24/2012) The pygmy three-toed sloth (Bradypus pygmaeus) is one of the world’s most endangered mammals, according to a detailed survey of the population, which found less than 100 sloths hanging on in their island home. Only described by researchers in 2001, the pygmy sloth lives on a single uninhabited island off the coast of Panama. But human impacts, such as deforestation of the island’s mangroves, may be pushing the species to extinction.