Gold mine approved in French Guiana’s only national park 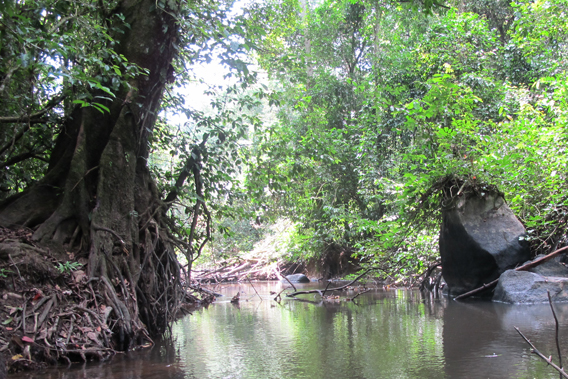 Limonade River in French Guiana. The French government has approved a new gold mine near the river, which locals depend on. Photo by: Sébastien Brosse.

Tensions have risen in the small Amazonian community of Saül in French Guiana after locals discovered that the French government approved a large-scale gold mining operation near their town—and inside French Guiana’s only national park—against their wishes. Run by mining company, Rexma, locals and scientists both fear that the mine would lead to deforestation, water pollution, and a loss in biodiversity for a community dependent on the forest and ecotourism.

The gold mine isn’t necessarily illegal despite occurring inside the Guiana Amazonian Park. Tropical ecologist Sébastien Brosse, who has long worked in the region, says that a portion of the park is open to such activities.

Here the reaction has been clear. “Since the beginning, both refused this mining project,” Brosse says, who has studied the negative impact of gold mining on local fish and algae.

Rexma’s proposal was approved by the French government’s minister of Production Recovery, Arnaud Montebourg, last year. While the project was initially pushed forward under the past administration, the current government—under Francois Hollande—has let the approval stand. French Guiana remains an overseas department of France, and not an independent nation, meaning that such decisions are often made in Paris not Cayenne. While there is a locally elected body, they are overseen by a prefect appointed by the French President.

Brosse says that locals are “firmly opposed” with almost all of them signing a declaration that calls for no gold mining within 10 kilometers of their town. Locals fear that if the mine goes ahead their ecotourism businesses will suffer.

A recent letter to Montebourg signed by a group of experts, including Brosse, outlines these concerns.

“For several decades, [Saül] has built a solid reputation in terms of eco-tourism and the vast majority of people live these activities […] validated and encouraged by the creation of the National Park,” the letter reads. “The introduction of a gold mining site near the village thus goes against the image of pristine environment that is known of Saul and the pride of its inhabitants. The decline in tourist consecutive mining activities could therefore jeopardize the local economy and hinder the harmonious development of the village.”

Brosse says mining could also worsen malaria in the region, since the industry leaves stagnant reservoirs where mosquitoes breed. In addition, the gold mine could devastated the villager’s access to unpolluted fish.

“Limonade River is the only stream located close to the village and the only source of fresh fish,” Brosse says, noting that the mine will occur alongside Limonade River. A 2011 freshwater fish study in the area found several rare species and some that may even be new to science. In addition, pollution in Limonade would likely become disseminated far-and-wide.

Botanist Scott Mori, with the New York Botanical Garden, has also written an open letter to French Guiana’s prefect warning: “I predict that there will be a universal protest against gold mining in this area because it is no longer secret that gold mining destroys the environment everywhere it occurs, and because destroying the rights to clean water is an ecological crime.”

Created in 2007, the 33,900 square kilometer (13,089 square mile) Guiana Amazonian Park is home to a number of big imperiled species including jaguars, tapirs, pumas, as well as stunning biodiversity: in all scientists have recorded over 1,200 tree species, 718 birds, 480 freshwater fish, 261 reptiles and amphibians, and 186 mammals inside the park.

Rexma did not respond to a request for comment about the gold mine. 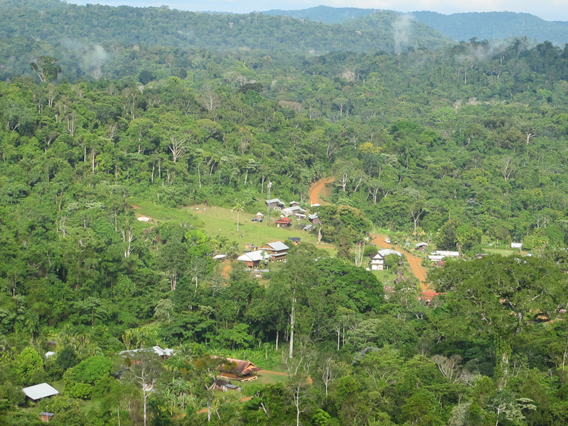 Aerial view of the village of Saül. Photo by: Sébastien Brosse.

(02/06/2008) Environmentalists declared victory after the French government blocked approval of a controversial gold mine bordering the Kaw wetland, an ecologically rich site in French Guiana. The decision was handed down last week following an environmental assessment by the Ministry of Ecology and Sustainable Development based on work by local scientists.

(02/28/2007) Environmental group WWF has applauded the creation of a new national park in French Guiana, a department of France located in northeaster South America. WWF says the 2 million-hectare Guyana Amazonian Park will link to protected areas in neighboring Brazil, including the Tumucumaque National Park, Grao-Para Station and Maicuru Reserve. In total, the protected areas network will encompass 12 million hectares of tropical forest, making it the world’s largest rainforest park.

Time is running out for French Guiana’s rainforests

(12/19/2006) Understanding relationships between plants and animals is key to understanding rainforest ecology. Dr. Pierre-Michel Forget of the Museum National d’Histoire Naturelle in France is a renowned expert on the interdependency between rainforest trees and seed disperses. Author of dozens of papers on tropical forest ecology, Dr Forget is increasingly concerned about deforestation and biodiversity loss in forests of the Guiana Shield region of Northern South America. In particular he sees the invasion of informal gold miners, known as garimpeiros, as a significant threat to forests in French Guiana, Suriname, Guyana and Venezuela.

(12/19/2006) As Europe frets over climate change and deforestation, threats to “Europe’s largest tropical rainforest” are mounting, according to reports from French Guiana. While French Guiana is best known for its infamous Devil’s Island penal colony and as the main launch site for the European Space Agency, which is responsible for more than 50% of the state’s economy activity, most of the territory is covered with lowland tropical rainforest. French Guiana’s forests are biologically rich with some 1,064 known species of amphibians, birds, mammals and reptiles, and 5,625 species of vascular plants according to figures from the World conservation Monitoring Center.