The IUCN Red List releases its 2012 update, adding 247 species to its threatened categories. The king cobra has been evaluated by the IUCN Red List for the first time and listed as Vulnerable. Photo by: Rhett A. Butler.

Nearly 250 species have been added to the threatened categories—i.e. Vulnerable, Endangered, and Critically Endangered—in this year’s update of the International Union for Conservation of Nature’s (IUCN) Red List. The 247 additions—including sixty bird species—pushes the number of threatened species globally perilously close to 20,000. However to date the Red List has only assessed 4 percent of the world’s known species; for the other 96 percent, scientists simply don’t know how they are faring.

“Expanding both the number and diversity of species assessed on the IUCN Red List is imperative if we are to have a clear understanding of our impact on the natural world,” says Richard Edwards, Chief Executive of Wildscreen, in a press release. Wildscreen is working with the IUCN Red List to raise awareness of endangered species.

This year’s list includes the addition of East Asian snakes, an update on the world’s bird species, and two primates—the Caquetá titi monkey (Callicebus caquetensis) and the Burmese snub-nosed monkey (Rhinopithecus strykeri)—added to the Critically Endangered category, the most severe category before extinction. Decimated by poisoning, the white-backed vulture has been uplisted to Endangered. Photo by: Rhett A. Butler.

The 2012 update of the IUCN Red List found that 10 percent of snake species that are only found in East Asia are threatened. Many of these snake species are imperiled by over-harvesting for food, anti-venom, and decorative skins. One of the world’s most famous snakes, the king cobra (Ophiophagus hannah) has been listed as Vulnerable due to habitat loss and over-harvesting for medicine. Another well-known Asian snake, the Burmese python (Python bivittatus) is also considered Vulnerable from over-exploitation for food and skins. Deforestation is also imperiling many snakes in the region.

“More than half of the snake species identified as threatened with extinction—57%—are at most risk from habitat loss and degradation. The Malaysian island Pulau Tioman is home to three of the Critically Endangered reptile species—the Pulau Tioman ground snake, Boo-Liat’s kukri snake and a recently described reed snake, Oligodon booliati—that are under threat from development destroying the small area of remaining forest. This could result in their extinction within a decade,” explains Russell Mittermeier, IUCN Vice President and President of Conservation International.

To date, the IUCN Red List has only assessed 38 percent of the world’s reptiles, making it the least known of the world’s terrestrial vertebrates. The evaluation of East Asia’s snakes was supported by the U.S. Fish and Wildlife Service.

This year also saw updates to the world’s 10,000-plus bird species. The update, which occurs every four years, found Amazonian birds of particular concern. Almost 100 birds in the Amazon were upgraded from prior assessments, meaning they were found to be more endangered than previously believed. This includes such species as the hoary-throated spinetail (Synallaxis kollari) which has been moved from Endangered to Critically Endangered, and the Rio Branco antbird (Cercomacra carbonaria), which has jumped from Near Threatened to Critically Endangered.

“We have previously underestimated the risk of extinction that many of Amazonia’s bird species are facing,” explains Leon Bennun, Director of Science, Policy and Information at Birdlife International. “However, given recent weakening of Brazilian forest law, the situation may be even worse than recent studies have predicted.”

African vultures have also taken a hit, much like their Asian cousins, due largely to poisoning. Both the white-backed vulture (Gyps africanus) and Rueppell’s Vulture (Gyps rueppellii) has been moved from Near Threatened to Endangered.

Not all news out of the update to the Red List is bleak, however. Targeted conservation efforts have pushed the Rarotonga monarch (Pomarea dimidiate) back from the edge of extinction. Endemic to Rarotonga Island, this bird has been moved from Critically Endangered to Vulnerable, but is still dependent on conservation action. The Restinga antwren (Formicivora littoralis), native to Brazil, has been downgraded from Critically Endangered to Endangered after its population was discovered to be slightly larger than initially estimated.

In 2010 researchers asked for a $60 million dollar fund to triple the number of species now assessed, including assessing 35,000 vertebrates, 38,000 invertebrates, 25,000 plants, and 14,500 fungi. The scientists argued that such vital assessments would create a much-needed “barometer of biodiversity.” To date, that initiative has not received backing. 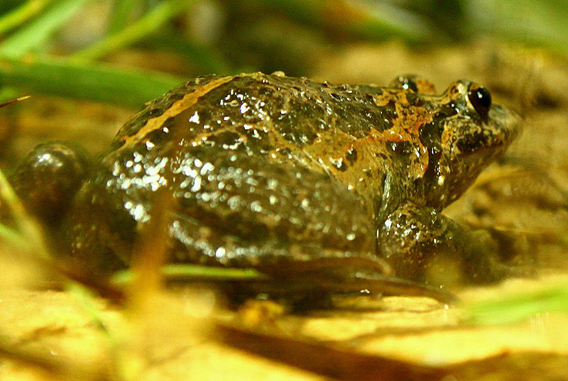 After missing for over 60 years, the Hula painted frog was rediscovered in Israel. This photo shows the rediscovered female that has brought hope that the species could still be saved. Photo by: Mickey Samuni-Blank.

As of this year, the IUCN Red List has recorded 801 extinctions going back to 1500. This year saw the addition of four species to the ‘Extinct’ category: the ovate club shell (Pleurobema perovatum), the fish springs marsh snail (Stagnicola pilsbryi), and two plants from the Democratic Republic of the Congo: Acalypha dikuluwensis and Basananthe cupricola, both of which were obliterated by surface mining for copper.

Some likely extinctions, however, have not been noted by the IUCN Red List yet since the organization waits until “there is no reasonable doubt that the last individual has died.” For example a paper came out this year declaring that the Christmas Island pipistrelle (Pipistrellus murrayi) was extinct as of 2009, however the Red List still considers the species as Critically Endangered. The Yangtze River dolphin (Lipotes vexillifer) also remains listed as Critically Endangered, despite many researchers believing the species is likely gone for good. A 2006 search failed to find a single dolphin.

There is a reason why the IUCN Red List remains conservative when announcing extinctions, since this year also saw two species moved out of the ‘Extinct’ category: both the Hula painted frog (Discoglossus nigriventer) and the wicker ancylid (Rhodacmea filosa), a small snail in the U.S., have been moved from Extinct to Critically Endangered following their re-discoveries in the wild. For its part, the Hula painted frog had not been seen since 1955.

Scientists have been warning for decades that the world could soon enter an age of mass extinction. Given ongoing environmental destruction and degradation, researchers estimate that extinctions may be occurring at 100-1,000 times above the natural rate as found in fossils. The world’s species are imperiled by deforestation, overexploitation, overfishing, pollution, invasive species, habitat loss, and climate change, among other impacts.

“The latest update to the IUCN Red List highlights the impacts we are having on the world’s biodiversity, even those species that so many of the human population rely on for food, medicine, clean water, etc.,” Edwards says. “We need to successfully communicate the plight, significance, value and importance of all these species if we are to rescue them from the brink of extinction.”