Earth systems disruption: Does 2011 indicate the “new normal” of climate chaos and conflict? 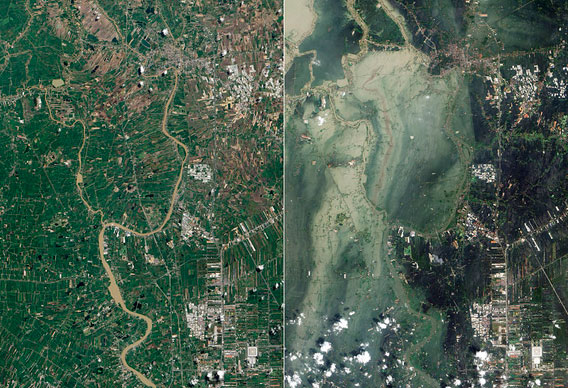 Before and after satellite images of flooding in Ayutthaya Province, Thailand. Photo by: NASA.

The year 2011 has presented the world with a shocking increase in irregular weather and disasters linked to climate change. Just as the 2007 “big melt” of summer arctic sea ice sent scientists and environmentalists scrambling to re-evaluate the severity of climate change, so have recent events forced major revisions and updates in climate science.

Climate experts James Hansen and Ken Caldeira have newly announced that the formerly proposed acceptable level of warming to avoid dangerous climate change could be catastrophic. Hansen explains, “The dangerous level of climate change is less than we thought a few years ago…a target of two degrees is actually a prescription for long-term disaster.”

In the modern, globalized world the stability of individual nations and bioregions is intimately connected. The boundaries and delineations we accept in terms of geopolitics and cartography do not reflect the reality of the Earth System, nor its sensitivity and intense interconnectivity. The incredible cascade of events leading up to the revolutions of the Arab Spring exemplifies the importance of this connectivity.

While many regions of the Middle East and North Africa were already suffering from severe circumstances due to multiple factors, the climate-linked droughts in Russia during the summer of 2010 appear to have been a major contributing aspect to food price hikes, increased social tension and eventually revolutions. In Global Warming and the Arab Spring the International Institute for Strategic Studies (IISS) reports, “A proximate factor behind the unrest was a spike in global food crises, which in turn was due in part to the extreme weather throughout the globe over the past year.” The IISS article details the interlinking factors of climate change and upheaval, insisting climate change has and will continue to be a key factor in large social disruptions.

World leaders and governments have consistently overlooked climate change as a disruptive force. Many contemporary military and security analysts have, instead, suggested terrorism as the linchpin threat to the sovereignty of present day national governments, and the security of their internal populations.

While most present day terrorist groups or “global guerrillas” are mostly loosely connected networks with mere fractions of the funding of wealthy nations, these groups have been very successful in causing widespread economic and social havoc through the techniques of systems disruption. This method takes advantage of critical nodes in connected networks that will yield cascading, damaging effects throughout the greater system.

Regarding systems disruption, conflict analyst and author John Robb explains, “a very small number of attacks on the critical hubs of a scale-free network can collapse the entire network. Such a collapse can occasionally happen by accident, when random failure hits a critical node; think of the huge Northeast blackout of 2003, which caused $6.4 billion in damage […] the networks of our global super-infrastructure are tightly ‘coupled’—so tightly interconnected, that is, that any change in one has a nearly instantaneous effect on the others. Attacking one network is like knocking over the first domino in a series: it leads to cascades of failure through a variety of connected networks, faster than human managers can respond.” This connectivity and dependency between not only nodes in energy or socioeconomic systems, but also within ecological realms presents systems disruption due to global change events as among the greatest challenges to world populations. As climate change increasingly affects major economies, terrorists will be hard-pressed to compete with the levels of disruption wrought by nature.

A brief review of some of the severe weather events of 2011 substantiates the importance of climate change in global security:

North America: The National Oceanic and Atmospheric Administration (NOAA) reports that 2011 breaks the previous record of severe weather events causing over 1 billion in damages each in the United States. Extreme drought conditions in Texas/Southwest US and Northern Mexico had global economic effects. 2011 sets record wet/dry extremes in the United States.

Additionally, the NOAA has declared 2011 as “one of the most extreme years on record” in terms of weather-related disasters, claiming warming temperatures led to increased atmospheric moisture and contributed to rise in frequency and severity of these events. Combined costs of weather-related disasters in the US alone are over $52 billion for 2011.

Climate change factors in the rising migration of Mexican nationals into the United States, according to the National Centre for Atmospheric Research. Mexico suffered from extreme drought during the first half of 2011, though southern regions were subjected to torrential rain and flooding.

Many Central American coffee farmers at low and middle elevations struggle to maintain production and adjust to harsh weather.

Decreased snowfall and higher temperatures have shut down and interfered with major ski and winter recreation industries.

A series of major storms affected the UK during late 2011, leading to widespread power outages, flooding, and associated damages. Winds have been reported gusting at 165 mph.

South America: Flash floods in Brazil killed over 500 people. Additional flooding in Colombia affected more than 2 million residents, destroyed over 3,000 homes, and damaged 180 roads. President Juan Manuel Santos announced, “…there has never been a tragedy of this scale in our history.”

Oceania: A state of emergency was declared in New Zealand’s Tasman district as record flooding dumped 420 millimeters of rain in 24 hours, forcing the evacuation of hundreds of residents.

Australia was hit by enormous storms and floods beginning in December 2010 and lasting into early 2011. Thirty-five people were killed in the Queensland floods, and the state’s coal industry was severely disrupted. Victoria was also hit by major storms in mid January. Over 51,700 hectares of pasture and 41,200 hectares of crops were damaged, costing hundreds of millions of dollars.

Africa: Drought in the Horn of Africa continued in 2011, threatening food security for some 12 million people. Temperatures of 63 Celsius (145 Fahrenheit) were recorded in the south of Egypt. Drought and sporadic, heavy rains also decimated agriculture across Africa. Drought in Somalia has forced the migration of some 920,000 refugees; conditions in over-crowded refugee camps are deteriorating. Civil war in Somalia has limited the ability of international aid workers.

Flooding of a major Honda production facility in the area led to production loses of some 250,000 vehicles globally due to systemic interference in parts distribution. Toyota additionally reported loses in production of almost 100,000 vehicles due damage to their factories in Thailand. Toyota has already experienced a “70 percent nosedive in fiscal first-half profit” due to the tsunami in early March 2011, according to the Huffington Post.

Dell computers, Toshiba, Sony, and Western Digital have all suffered substantial economic losses in connection with the flooding. It is thought that Western Digital—a major producer of computer hard disks—will incur the most dramatic losses, with some 75% of its production lines shut down.
The effects of the decline in production have already hit markets, with some retailers reporting hard disk prices doubling in price

Chief executive officer of Hana Microelectronics, Richard Han, claims the consequences of Thailand’s catastrophic inundations may be greater than the economic disturbance of Japan’s tsunami in March.

During the Cambrian period, between 542–488 million years ago, the world experienced a profound episode of rapid warming. Evidence suggests that sea levels averaged ten meters higher than present, with ocean temperatures as high as 40 degrees Celsius. Global hyperwarming—unlike many other temperature anomalies—does not necessary rely on increases in carbon dioxide. Hyperwarming during the Cambrian was likely driven by feedbacks related to the rise in heat storage of the extensive, shallow seas. Historical data indicate that hyperwarming periods may be forced by similar feedback mechanisms being observed at present.

The release of methane (a powerful greenhouse gas) from permafrost melt and clathrates in arctic regions is one of the phenomena with a significant potential to contribute to hyperwarming. The NSICD reports methane escaping from the arctic is expected to add over 1 billion tons of carbon each year to the atmosphere in less than two decades.

The signals of abrupt climate change are already evident. Climate models and simulations can never fully calculate or predict the dynamic feedbacks of the Earth System. Real world circumstances unfold according to the principles of complex systems with far too many variables, unknowns, and interactions.

The events of 2011 and their rippling effects through economic and ecological systems suggest that we have already entered into a period of dangerous climate change. Our perception of “dangerous,” however, tends to be distorted by mainstream media and culture. The continued inaction of the developed world indicates that they regard the climate disasters of 2011 as acceptable, and certainly not “dangerous.” As long as the prosperity, power, and status of the individuals and groups benefiting from activities that are profitable to themselves—and yet horribly destructive to the others and the Earth System itself—what is dictated as “dangerous” is that which interferes with their ability to make profit and maintain power. Until massive social pressure such as that witnessed in the Arab Spring uprisings is harnessed on behalf of climate justice, the deaths and destruction of climate change are and will continue to be regarded as “inconvenient” and “disruptive” to governments and corporations.

Texas loses half a billion trees to epic drought

(12/21/2011) A punishing drought in Texas has not only damaged crops, killed cattle, and led to widespread fires, but has also killed off a significant portion of the state’s trees: between 100 and 500 million trees have perished to drought stress according to preliminary analysis. The estimate does not include tree mortality caused by fires. The drought has been linked to La Niña conditions, which causes drying in the Southern U.S., and has likely been exacerbated by global climate change.