Many tropical plants depend on other species to carry their progeny far-and-wide. Scientists are just beginning to unravel this phenomenon, known as seed dispersal, which is instrumental in supporting the diversity and richness of tropical forests. Researchers have identified a number of animal seed dispersers including birds, rodents, monkeys, elephants, and even fish. Now a new study in the Journal of Tropical Ecology adds another seed disperser to that list: the Critically Endangered black-and-white ruffed lemur (Varecia variegata). Capable of dispersing big tree species, the black-and-white ruffed lemur may even play a big role in carbon sequestration.

“It’s difficult to say why the black-and-white ruffed lemur had received very little attention, despite being an ideal candidate for seed dispersal,” Kara Moses, lead author of the paper told mongabay.com. A Masters by Research in Primatology student at Roehampton University, Moses is the first researcher to examine the black-and-white lemurs’ potential as seed dispersers in-depth.

“It may be partly due to the difficulties involved in studying them—they are only found in the eastern rainforests of Madagascar, where the terrain and conditions are often pretty heavy going. They also spend most of their time in the high canopy, making fecal sample collection—a crucial part of seed dispersal studies—quite a challenge,” she says.

Focusing on two groups of black-and-white ruffed lemurs, Moses catalogued their seed dispersal abilities over three months. Collecting 3,252 seeds from fecal samples, as well as watching the primates feed, Moses found that the lemurs dispersed the seeds of 40 different species of plants with a special affinity for big seeds.

“Ruffed lemurs are the most fruit-reliant of all the lemurs and have a very diverse diet, meaning they can disperse a large number of seeds and wide diversity of species; they are the largest of the seed-dispersing lemurs, with the largest gape size, so they can swallow the big seeds that other animals can’t—tree species with the biggest seeds may then depend exclusively on ruffed lemurs to disseminate their seeds; they range relatively far during their daily travels, so can potentially carry seeds over long distances; and their droppings are very loosely held together, and broken up further by falling through the branches from the high canopy where they live. This means that seeds are highly scattered when they reach the ground, so they suffer less from competition and predation by seed eating animals,” Moses explains, adding that, “all of these things are good news for seed germination.”

Listed as Critically Endangered by the IUCN Red List, the black-and-white ruffed lemur’s population is thought to have fallen by 80 percent in less than three decades. Habitat loss due to slash-and-burn agriculture has been the primary driver of the lemur’s decline.

“But logging and mining are ever-increasing pressures on forests too,” Moses adds. Hunting is also a problem in some parts of their remaining habitat.

Yet, even as they are vanishing, Moses believes the lemurs’ seed dispersal ability may play an important role in the capacity of Madagascar’s forests to store carbon. This is directly linked to the lemurs as large seed-specialists.

“Trees that produce large seeds tend to be large, slow-growing, long-lived and have relatively dense wood, so they’re able to store more carbon over their lifetimes than small-seeded trees which, conversely, are generally smaller, faster-growing, shorter-lived, and have lighter wood,” Moses explains. “If the trees that produce large seeds don’t get their seeds dispersed—a likely scenario if large seed-dispersing animals like ruffed lemurs disappear—they begin to die out. Species with small seeds that can be dispersed by many animals, and species with wind-dispersed seeds, may then gain a competitive advantage and begin to dominate the forest. The forest becomes one composed mainly of trees with low carbon-storage potential, and the carbon-storage capacity of the whole forest is affected.”

Moses adds, however, that much work needs to be done on the possible connection between seed dispersers and carbon sequestration: “these links are only just starting to be tentatively made, and we don’t know the full story, but it’s a worrying prospect.”

Still, black-and-white ruffed lemurs “play a crucial role in maintaining forest diversity, structure and dynamics by dispersing large numbers of seeds and particularly by moving large seeds that may not be dispersed by anything else,” Moses concludes, adding that “it’s essential that these animals are protected to ensure the future of Madagascar’s rainforests.” 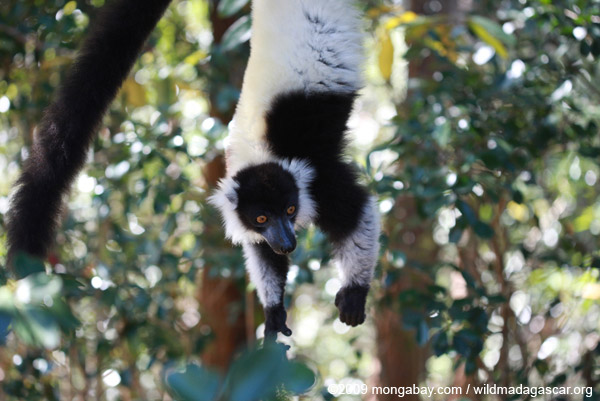 Black-and-white ruffed lemurs spend most of their time in the trees. Photo by: Rhett A. Butler.

(04/19/2011) Richard Branson’s plan to introduce lemurs on one of his private islands in the Caribbean is a terrible idea if he really aims to protect the primates from extinction. Beyond the much-discussed ecological impact of bringing in non-native primates, Branson’s scheme risks undermining conservation efforts where lemurs actually exist in the wild: Madagascar.

(02/17/2011) Madagascar is a land of wonders: dancing lemurs, thumbnail-sized chameleons, the long-fingered aye-aye, great baobab trees, and the mighty fossa. Wait—what? What’s a fossa? It’s true that when people think of Madagascar rarely do they think of its top predator, the fossa—even if they are one of the few who actually recognizes the animal. While the fossa gained a little notice in the first Madagascar film by DreamWorks, its role in the film was overshadowed by the lemurs. In this case, art imitates life: in conservation and research this feline-like predator has long lived in the shadow of its prey, the lemur. Even scientists are not certain what to do with the fossa: studies have shown that it’s not quite a cat and not quite a mongoose and so the species—and its few Malagasy relatives—have been placed in their own family, the Eupleridae, of which the fossa (Cryptoprocta ferox) is the biggest. But if this is the first you’ve heard of such matter, don’t feel bad: one of the world’s only fossa-researchers, Mia-Lana Lührs also stumbled on the species.

(01/20/2011) A survey of a remote forest area in Madagascar turned up seven new groups of silky sifaka, a critically endangered lemur threatened by habitat destruction. The finding raises hope that the species—which is listed as one of the world’s 25 most endangered primates—is surviving in Marojejy National Park despite an outbreak of illegal rosewood logging in 2009 and 2010.