“Mongabay.com’s new series ‘Last Chance to See’ will attempt to highlight wild places on the verge of disappearing or being changed irrevocably.” 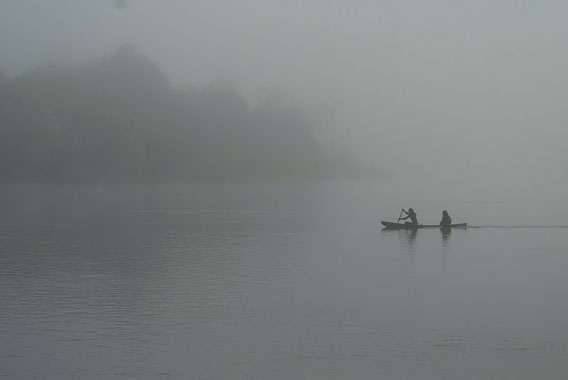 Not far from where the great Amazon River drains into the Atlantic, it splits off into a wide tributary, at first a fat vertical lake that, when viewed from satellite, eventually slims down to a wild scrawl through the dark green of the Amazon. In all, this tributary races almost completely southward through the Brazilian Amazon for 1,230 miles (1,979 kilometers)—nearly as long as the Colorado River—until it peters out in the savannah of Mato Grosso. Called home by diverse indigenous tribes and unique species, this is the Xingu River.

“The Xingu River is a symbol of Brazil’s cultural diversity and biological heritage. The river and its forests sustain the livelihoods of over 25,000 indigenous people from 18 ethnic groups, riverbank populations and innumerable species of plants and animals,” Christian Poirier, the Brazil Program Coordinator with Amazon Watch, told mongabay.com.

The Xingu is famous for the clarity of its waters. Dubbed a ‘clearwater river’, the Xingu River is a true rarity in the lowland Amazon where many rivers are the color of coffee due to sedimentation. A popular river for adventurous foreign anglers, one travel writer has described the Xingu as “golden beaches, verdant hills meeting turquoise waters.”

The Xingu River, however, will soon be lost. No, the river will not be filled in or disappear entirely; but its very character (the ecosystem and people which it provides for) will be forever changed by the construction of a monster dam, the Belo Monte, just approved by the Brazilian government. Once built the dam will be the world’s third largest.

“The ecosystem of the lower Xingu River basin will be devastated by the Belo Monte Dam,” contends Poirier. “In order to feed the dam’s powerhouse, up to 80 percent of the Xingu River will be diverted from its original course, causing a permanent drought on the river’s 100 kilometer long ‘Big Bend,’ and directly affecting the Paquiçamba and Arara territories of the Juruna and Arara indigenous peoples.”

Poirier says the Belo Monte will require more land to be unearthed than during the construction of the Panama Canal. In addition, the dam will flood around 66,800 hectares—over half of which is rainforest—and force the removal of somewhere between 16,000 and 40,000 people. The Xingu River’s unique species and important fishing grounds will also be impacted.

Experts fear for a number of species that only live in the Xingu River or its floodplains (see photos below), including the slender dwarf pike cichlid (Teleocichla centisquama), a unique species of plant-eating piranha (Ossubtus xinguense), the Xingu dart-poison frog (Allobates crombiei), and two pleco fish, also known as ‘suckerfish’, who thrive in the Xingu’s clear waters: the aptly-named zebra pleco (Hypancistrus zebra) and the sunshine pleco (Scobinancistrus aureatus).

“Cutting off the seasonal floodwaters of the Xingu would lead to the extinction of at least ten species of fish that are endemic to the Big Bend, and have a grave impact upon countless other species,” says Poirier. “Other migratory species such as the white-blotched river stingray and numerous turtle species will also lose access to their breeding grounds.”

Migratory fish populations are of special concern to the indigenous tribes and others living along the Xingu who depend on them for their survival. Research has found that 70 percent of protein consumed by Xingu locals comes from river fish. But if past mega-dams reveal any lessons, it’s that migratory fish populations, such as salmon, are some of the first decimated.

The dam will also change life along the river in other ways. The massive construction project will bring in a flood of migrants—up to 100,000—to riverside towns lacking the necessary infrastructure and housing.

“However, only a small percentage of these migrants will find work on Belo Monte, meaning the remaining labor pool will be driven to resort to illegal logging and cattle ranching, the two main causes of deforestation in the Amazon,” says Poirier. “As we are witnessing on Brazil’s Madeira River, where the government is currently building two mega-dams, deforestation has spiked 1000 percent in the region due in large part to the arrival of a huge number of migrants and the resulting pressure these people have placed on surrounding forests.”

Deforestation resulting from the influx of people looking for opportunity will likely risk the Xingu’s terrestrial species. Like much of the Amazon, the forest surrounding the Xingu River is home to an abundance of iconic wildlife such as jaguars, tapirs, peccaries, and macaws. In all over a hundred mammals and 500 birds have been recorded in the area. Two imperiled monkey species are also endemic to the Xingu region: the white-cheeked spider monkey (Ateles marginatus) and the Uta Hick’s bearded saki ( Chiropotes utahicki) both already classified as Endangered by the IUCN Red List.

The Belo Monte may rightly be construed as the most controversial dam project in the world. Indigenous groups have been fighting plans for the dam since 1975. By the 1990s they seemed to have won, only to see the dam resurrected by the Brazilian government during the past decade. Opposition to the dam remains fierce, both by indigenous people and internationally: a recent petition opposing the Belo Monte was signed by over half a million people worldwide.

Even after the government’s approval, indigenous leaders have pledged to continue to fight for the Xingu River—that great tributary of the Amazon—and their home. 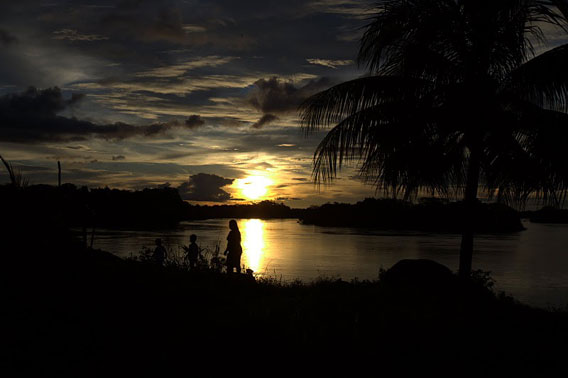 The Xingu River at sunset. Photo courtesy of Amazon Watch.

Some species of the Xingu 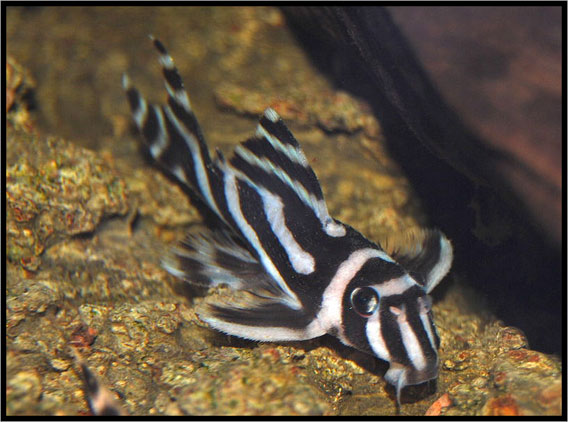 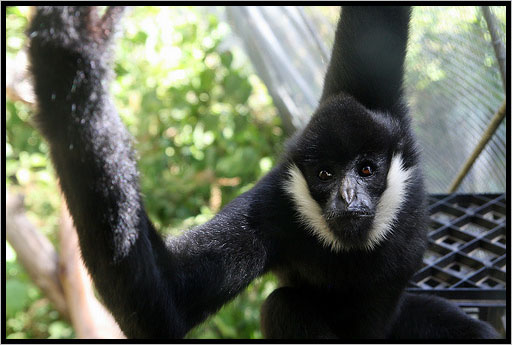 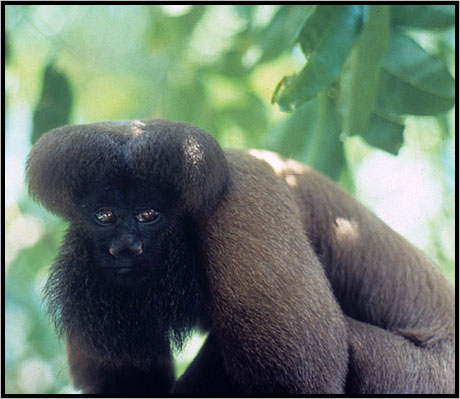 (05/02/2011) Brazil’s most controversial mega-dam, Belo Monte, which is moving full steam ahead against massive opposition, has received an extra infusion of cash from Vale, a Brazilian-run mining company.

(03/28/2011) Former US President, Bill Clinton, spoke out against Brazil’s megadams at the 2nd World Sustainability Forum, which was also attended by former California governor, Arnold Schwarzenegger, and film director, James Cameron, who has been an outspoken critic of the most famous of the controversial dams, the Belo Monte on the Xingu River.

World’s most controversial dam, Brazil’s Belo Monte, back on

(03/06/2011) A recent injunction against controversial dam, Belo Monte, in Brazil has been overturned, allowing the first phase of construction to go ahead. The ruling by a higher court argued that not all environmental conditions must be met on the dam in order for construction to start.

(03/02/2011) Three indigenous Amazonian leaders spent this week touring Europe to raise awareness about the threat that a number of proposed monster dams pose to their people and the Amazon forest. Culminating in a press conference and protests in London, the international trip hopes to build pressure to stop three current hydroelectric projects, one in Peru, including six dams, and two in Brazil, the Madeira basin industrial complex and the massive Belo Monte dam. The indigenous leaders made the trip with the NGO Rainforest Foundation UK, including support from Amazon Watch, International Rivers, and Rainforest Concern.

(02/27/2011) Construction on Brazil’s planned mega-dam, the Belo Monte, has been ordered suspended by a federal judge, citing unmet environmental and social conditions. Just last month, the hugely controversial dam, was handed a partial license from Brazil’s Environmental Agency (IBAMA). However, the judge, Ronaldo Destêrro, found that the partial license, the first of its kind in Brazil, was granted under pressure from the dam’s contractor, Norte Energia or NESA.

(02/08/2011) In a protest today in Brasilia, Brazil, indigenous people delivered a petition to authorities signed by 500,000 people calling on them to cancel the controversial Belo Monte dam. They hope the petition, organized by online activist group Avaaz, will help convince Brazil’s new president, Dilma Rousseff, to cancel the project. However, actions by Brazil’s first female president have pushed the dam forward.