In a landscape-wide study in the Congo, the Wildlife Conservation Society (WCS) found that core protected areas and strong anti-poaching efforts are necessary to maintain viable populations of forest elephants, western lowland gorillas, and chimpanzees—all of which are threatened with extinction.

Evaluating various land-uses in the Republic of Congo’s Ndoki-Likouala Conservation Landscape—including a national park, a community-managed reserve, and logging concessions—the study, published in PLoS ONE, found that the national park was the key to these popular species’ survival.

Human disturbance has proven particularly stressful to chimps and forest elephants outside of Nouabalé-Ndoki National Park, which contains some of the highest densities of chimpanzees in the world.

“Protected areas free of human disturbance, logging, or roads remain key to the protection of great apes and elephants,” explains WCS researcher Emma Stokes, the study’s lead author, in a press release. “Landscape conservation should focus on protected areas surrounded by other land-use types that also have wildlife management in place.”

Currently over thirty percent of the Congo Basin is covered by logging concessions, while 12 percent is under protection. Researchers estimate that over half of the ranges of western gorillas and chimpanzees are in logging concessions. The Congo Basin is the world’s second largest rainforest after the Amazon in South America and has seen commercial logging rise significantly during the past decade.

“This study shows that landscape-wide conservation can work in Central Africa—provided there are the resources and political will to save wildlife over large areas,” commented James Deutsch, Director of the WCS’s Africa programs. “Conservation on this scale is difficult and expensive, but absolutely necessary if we hope to save viable populations of elephants and great apes. At the same time, the government’s capacity to follow up and take legal action against poachers should be strengthened and is a key to maintaining the protection of the forests and their wildlife.”

Humankind’s closest living relative, the chimpanzee, is classified as Endangered by the IUCN. The forest elephant, considered by some to be a subspecies of the African elephant and by others to be its own species, is considered Vulnerable, while the western lowland gorilla is classified as Critically Endangered. Habitat loss and poaching (for bushmeat or ivory in the case of the elephants) are the largest threats for all three species.

To aid conservation of gorillas and chimpanzees, WCS is advocating that the US pass HR 4416 bill, which would provide additional support for the Great Ape Conservation Fund. This fund helped support the WCS’s surveys. 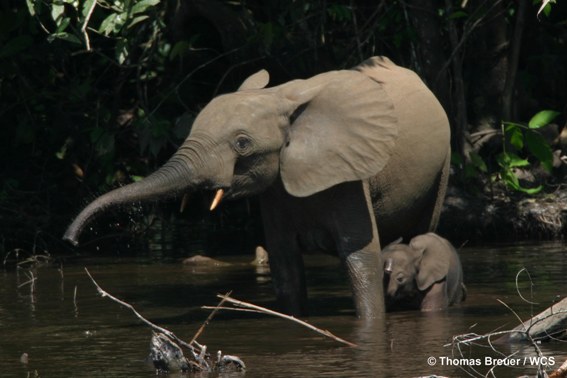 Guerrillas could drive gorillas toward extinction in Congo, warns UN

(03/25/2010) Gorillas may disappear across much of the Congo Basin by the mid 2020s unless action is taken to protect against poaching and habitat destruction, warns a new report issued by United Nations and INTERPOL.

(02/01/2010) The bushmeat trade in the Congo basin has been widely publicized but poorly addressed. While fines and sentences exist for wildlife trafficking, they have traditionally been poorly enforced due to corruption, poor governance, and attentions focused on other priorities. Major traffickers, who tend to be rich and well-connected, trade with impunity, knowing that a well-placed bribe or a phone call can get them off with little more than a slap on a wrist. But the days of privilege may be drawing to a close in Republic of Congo thanks to the efforts of PALF [Projet d’Appui à l’Application de la Loi sur la Faune], a Brazzaville-based NGO which is working to build the capacity of Congolese authorities to enforce wildlife laws. In the process, PALF is helping root out corruption and raise awareness of the plight of the country’s increasingly threatened wildlife, including forest elephants, big cats, chimps, and gorillas.