by Daniel Grossman and Dado Galdieri on 16 May 2022

RIPÁ, Brazil — One muggy morning last December, eight women and their chief drove out of the Indigenous Xavante village of Ripá across a forested savanna in the Brazilian state of Mato Grosso. After a few miles, the road petered out. They walked on in single file through the knee-high grass.

They got little shade from the savanna’s slight trees, but the fervor of their mission helped them press on through the heat.

“Listen to me carefully,” the daughter of the chief of Ripá, Neusa Rehim’Watsi’õ Xavante, told us. “The love we feel for the plants and the seeds make us walk under the scorching sun without complaint.”

Most of the 20,000 surviving Xavante people live in the Cerrado, a patchwork of spindly forest and wooded grassland, covering 40% of the western Brazilian state. Drier and less dense than the Amazon forest to the north, the Cerrado has its own exotic flora and fauna. Conservation biologists call it the most biologically rich savanna in the world; researchers report that five percent of the world’s plant and animal species live there.

Yet, during the past several decades, loggers have cut down huge swaths of Mato Grosso’s forest, turning 12% of Cerrado into pastures and croplands.

Seven years ago, Ripá’s members joined a group working to restore some of the Cerrado’s vegetation — and at the same time, to bolster residents’ fading fortunes by selling the seeds they harvested there. For as long as they can remember, villagers have made frequent harvesting journeys across their territory called dzomoris, expeditions during which they’d expertly hunt and harvest fruit and roots. Now they make these trips specifically for collecting seeds needed to replant degraded Cerrado land.

The movement has so far helped replant 74 square kilometers (about 29 square miles) of forest.

Ironically, the purchasers are sometimes the same individuals and companies to blame for the vast clearing projects that have created the need for replanting. And the governments pushing reforestation include the same agencies that failed to prevent the forest’s destruction in the first place.

Deforestation on the rise

A day after the seed collecting journey, chief Xavante got up early and painted his back, chest and hair with red and black war paint. He stood in the clearing where Ripá’s kids often play soccer. Under an overcast sky, other men also slathered in colored paint gathered around him. They chanted and pounded heavy clubs and hunting bows on the ground.

The chief told them that it was high time to evict the outsiders who had dug an illegal lime pit inside the southern boundary of their reservation. He closed the meeting with hoots that imitated a bird call, and the men piled into the back of the village’s old pickup truck.

A couple of hours later, the warriors confronted the offending miner and his family. The mine operator protested that he had gotten permission to excavate from one of the other Xavante chiefs in the territory. Indigenous leaders aren’t, on their own, supposed to let outsiders clear land and mine or farm it. But it happens, and the Ripá chief knew it. He and his warriors got back in their truck and drove off.

The confrontation clearly spooked the outsiders. Though, it didn’t stop the mining. But the Ripá chief had given notice that he’s fed up with the desecration of his territory’s forest. He told us that incursions into reservations is a constant problem.

“Look how they are grabbing the land!” he exclaimed.

But, he says, most of the cleared parts of the Cerrado forest have been on private land outside Indigenous territory, and there’s little he can do to stop that. Investors have razed vast areas of jungle with industrialized plantations growing soy, corn and cotton. And since Brazil’s right-wing president Jair Bolsonaro took office in 2019, the destruction has accelerated. According to recent data released by the National Institute of Space Research (INPE), the Cerrado is now experiencing the highest deforestation rate since 2015. About 8,531 square kilometers (3,293 square miles) of forest in Mato Grosso and a dozen other Brazilian states was lost from August 2020 to July 2021.

It was to help restore Mato Grosso’s fallen forests, if only by a token amount, that chief Xavante had crossed the hot savanna to collect seeds when we’d joined his group the previous day.

After the harvesters got out of the truck, they walked up the gentle slope toward the Roncador mountains, a rocky ridge sacred to the Xavante people. The nearer they came to the outcrop, the taller and closer together the trees grew. The sultry air cooled.

They halted at a marsh that covers a saddle between bluffs. The women fanned out across labyrinthine rivulets of water. There, they scooped handfuls of buriti, the fruit of a palm tree (Mauritia flexuosa), off the soggy ground into the string baskets they weave from the fiber of palm leaves. Buriti thrive where the ground is waterlogged.

The Xavante people regularly eat buriti and they know that the fruit is popular all around Brazil. But these Ripá women don’t sell the fresh fruit. They will sell the seeds. The net profit for the entire community selling buriti and other seeds will be about $1,200, and it will supplement their income from selling handicrafts, and modest government subsidies.

Income is not their primary reason for taking on this work, however.

On this all-day trip, the search found more than buriti.

A woman on the team climbed the gnarled, squat crown of a murici tree (Byrsonima crassifolia). She grabbed some branches and shook it hard. The tree vibrated, and firm fruit that look like yellow crab apples rained down. A little way off, women snapped pale, mango-size fruit off the slender branches of an angelim tree.

They tossed the fruit into their baskets. By afternoon, each woman had collected more than 20 pounds of fruit, all with marketable seeds.

‘A labor of love’

Brazil’s Forest Code and state laws require that landowners reserve part of their property in its native state, the percentage varying by region and vegetation type. In Mato Grosso, between 35% and 80% of the forest is supposed to be protected, though the reality is that farms often get away with saving less than they’re supposed to.

Owners who illegally clear land, ignoring the set-aside requirement, must replant native trees, and in some cases, they do. That creates the demand for seeds such as the buriti, murici and angelim.

Large commodity farms comprise most of the market. The Forest Code pays closest attention to replanting riverbanks, and road construction and other public-works projects often are mandated to replace vegetation they damage. Seeds collected by communities such as Ripá help to restore such land.

Villagers from Ripá and 24 other Indigenous groups in the state sell what they gather to a wholesaler known as Rede de Sementes do Xingu (RSX). It’s Brazil’s largest native-seeds supplier. Back in 2007, a coalition of Indigenous and non-Indigenous people founded it as a way to reforest Xingu River shoreline.

RSX ships seeds to farmers and other customers, and sometimes helps with planting as well. Farmers both within and outside Indigenous territories and also some city dwellers contribute to RSX’s stockpile, most of which is planted inside Mato Grosso.

In its 15 years, RSX has sold more than 300 tons of 220 species of seeds, including the walnut-sized seed of the pequi tree and the seed of the embaúb that is smaller than a grain of rice.

The amount of land it has replanted to date is notable, an area larger than that of Manhattan. Buyers combine the dried seeds they buy with dozens of other species in a mixture that, cast by hand, should within a decade grow into a grove mimicking native forest.

But in Mato Grosso, Brazil’s largest grain grower and home to the country’s largest cattle herd, even 74 square kilometers (29 square miles) can’t nearly balance out what is being cleared every year. Loggers there deforested more than thirty times as much, 1,000 square miles, just last year. 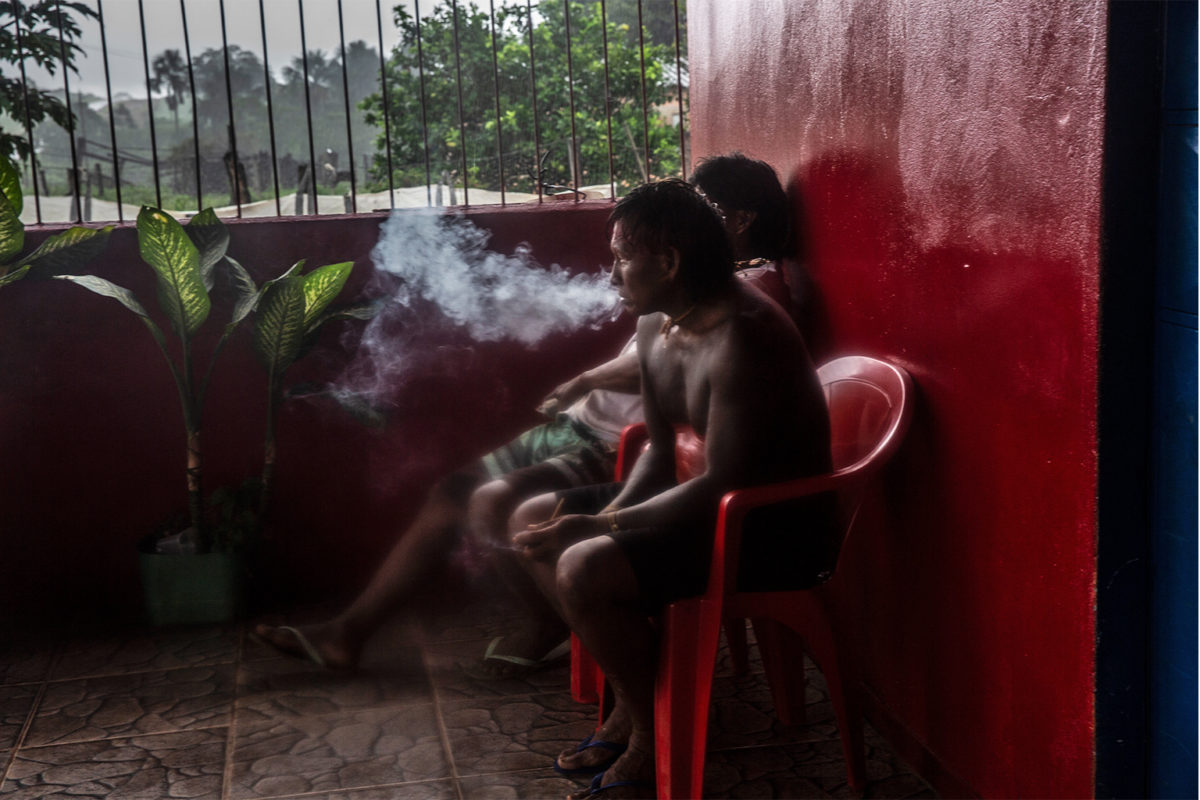 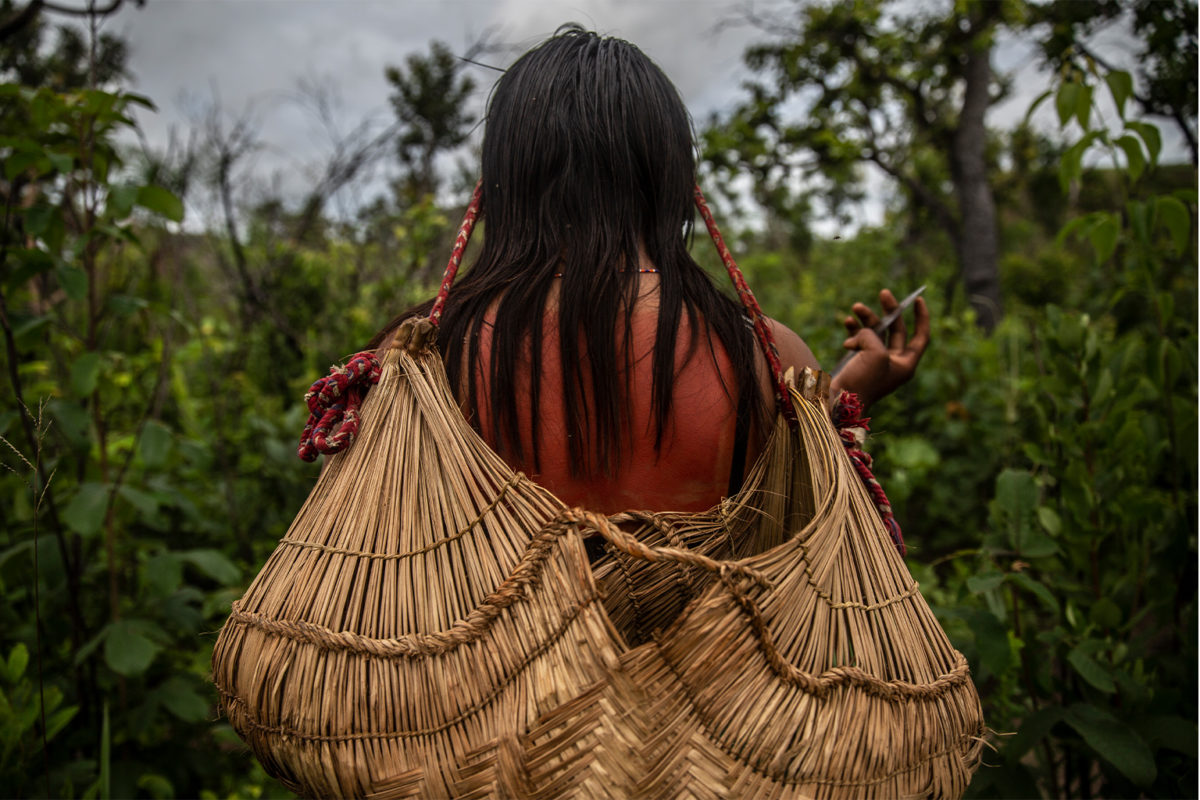 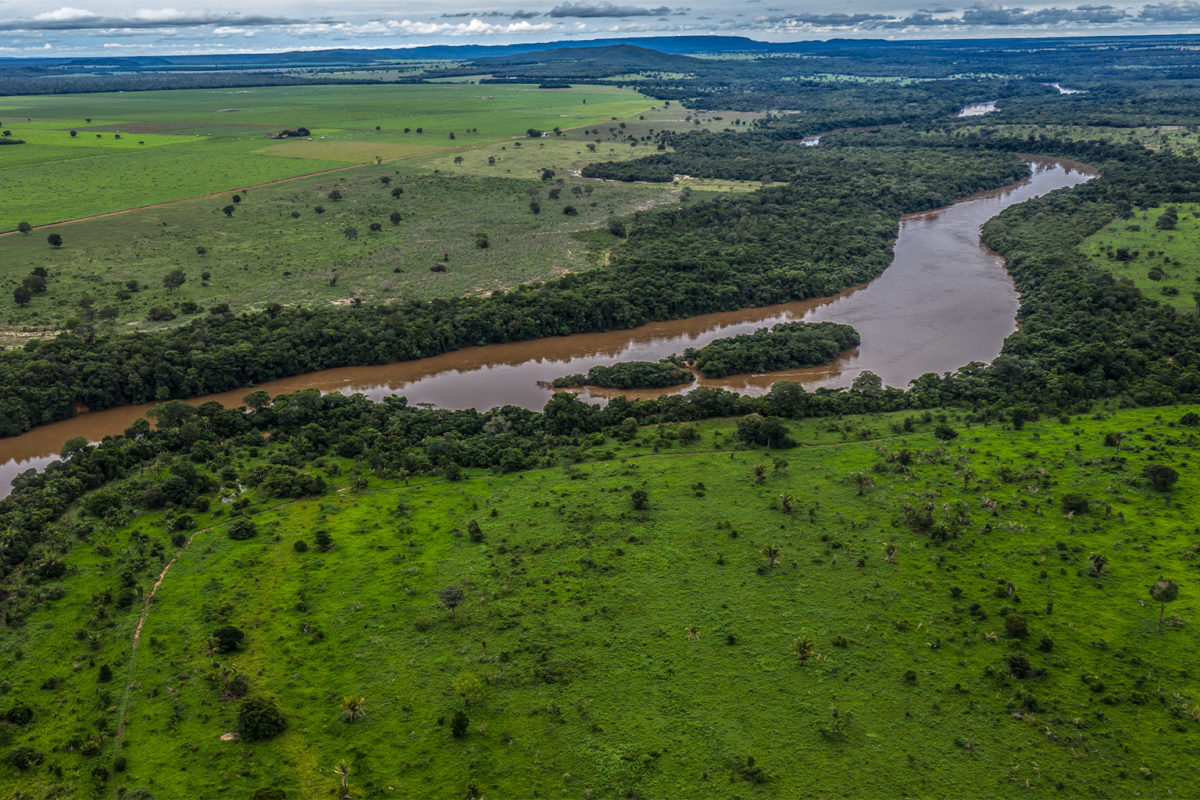 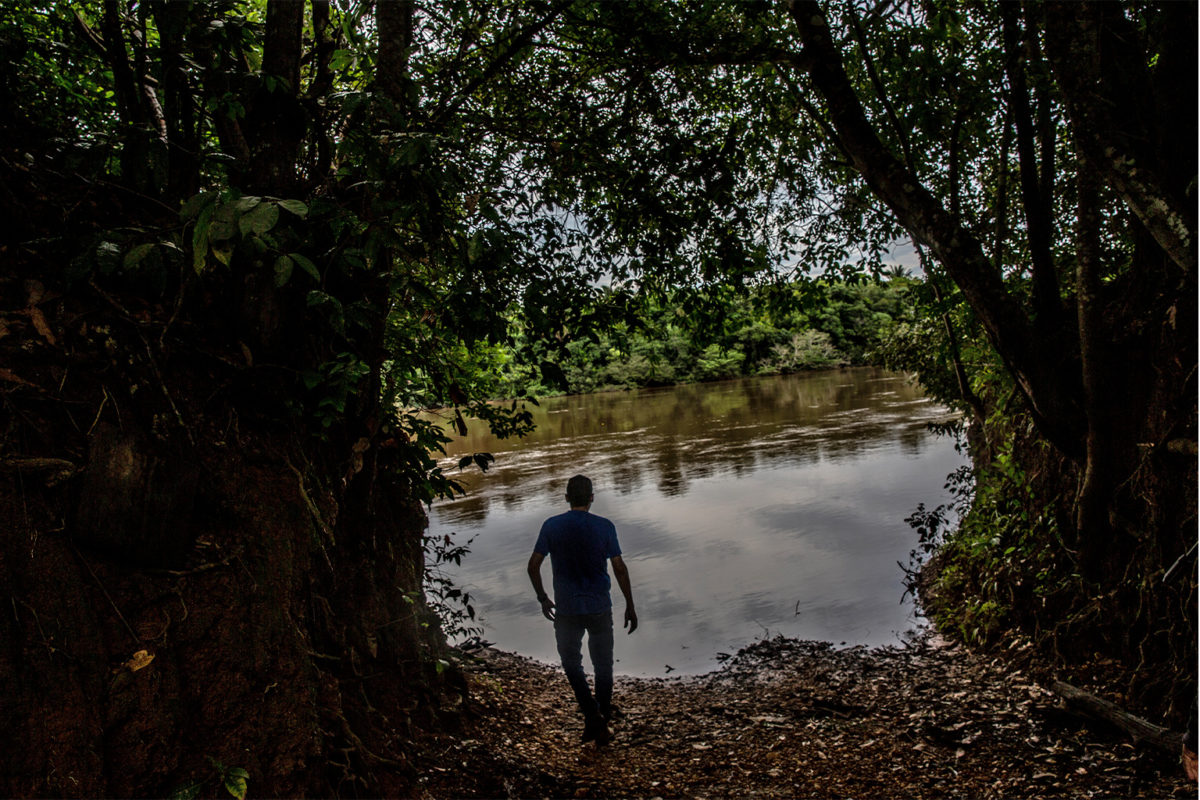 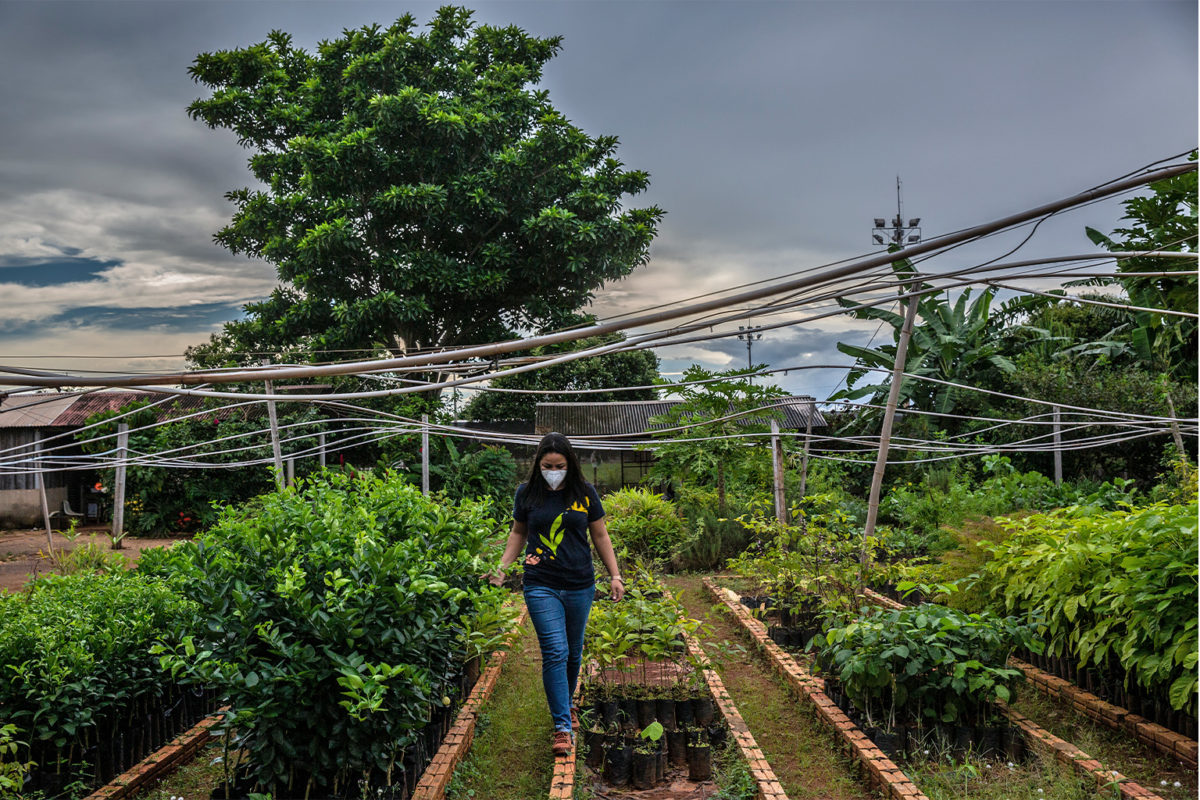 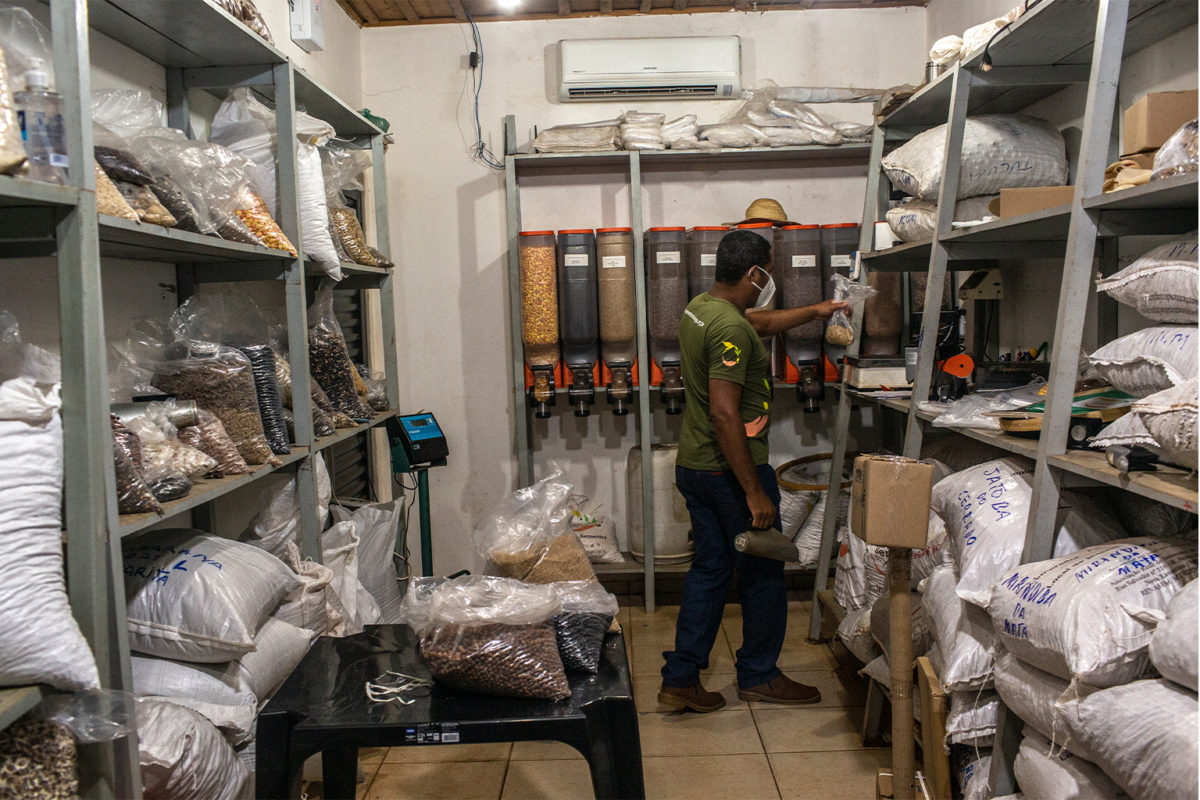 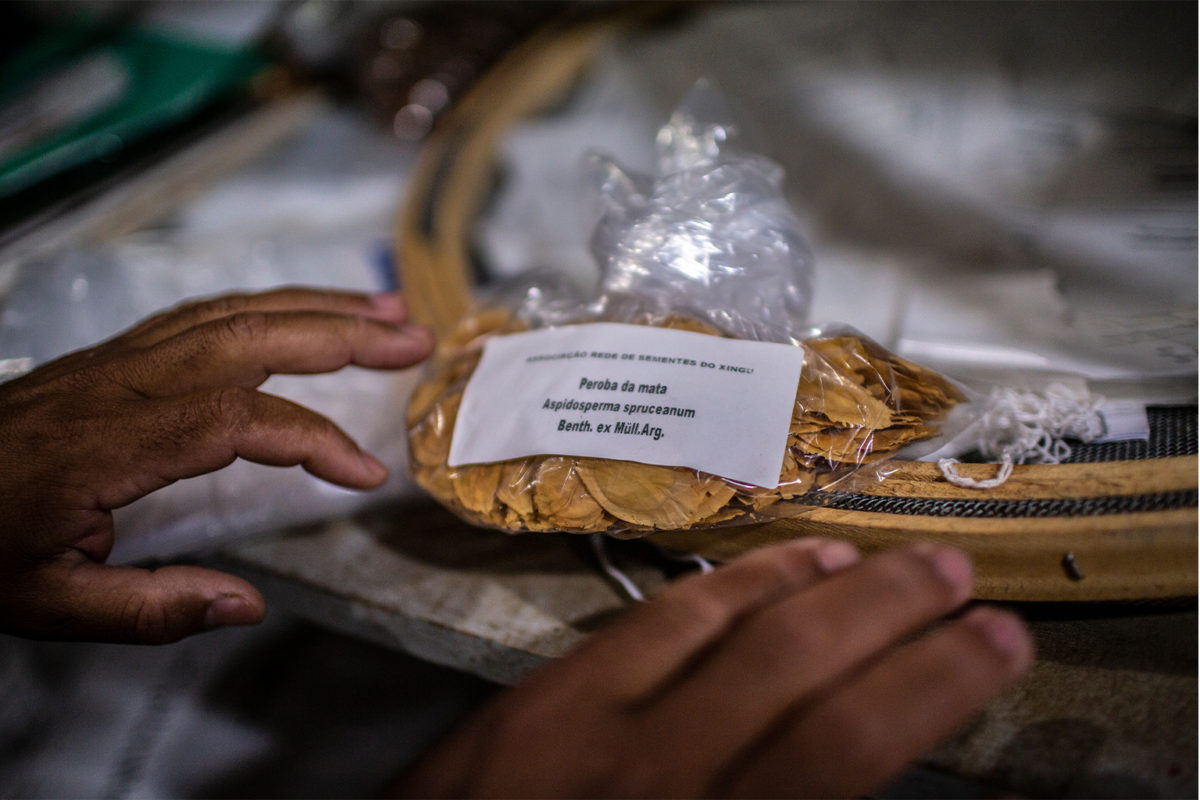 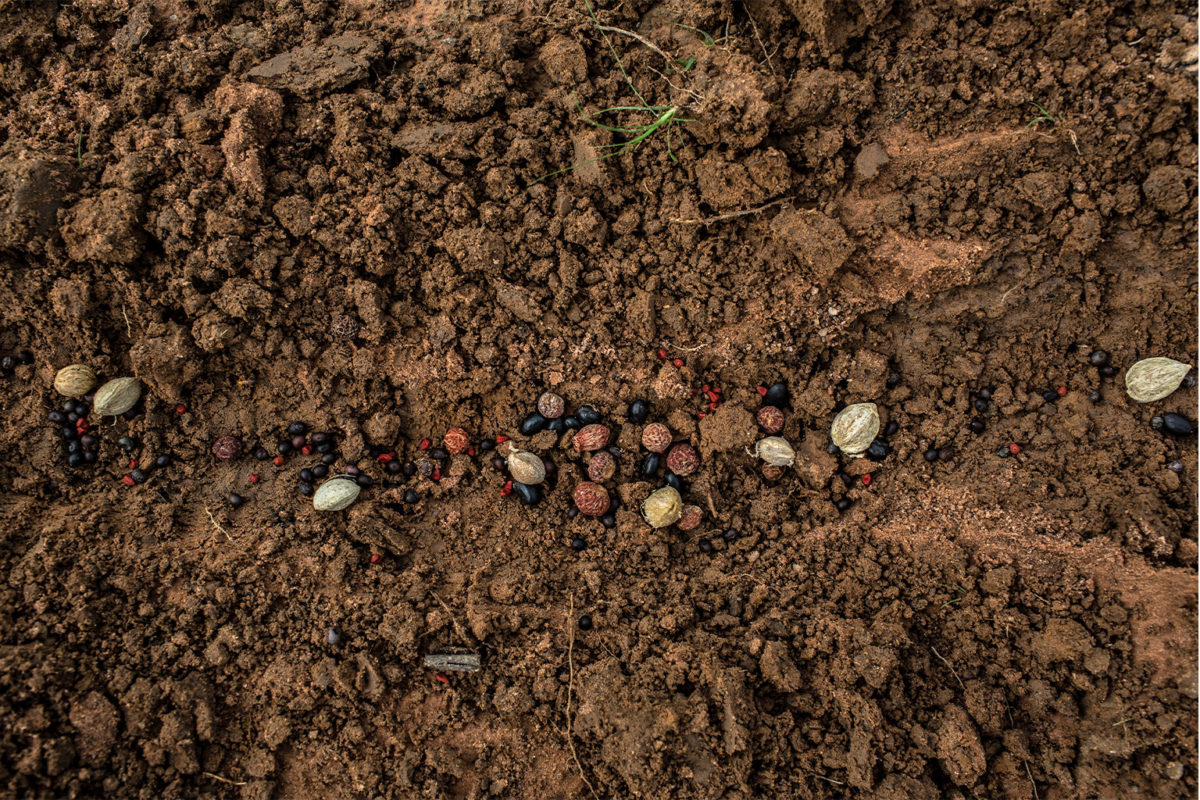 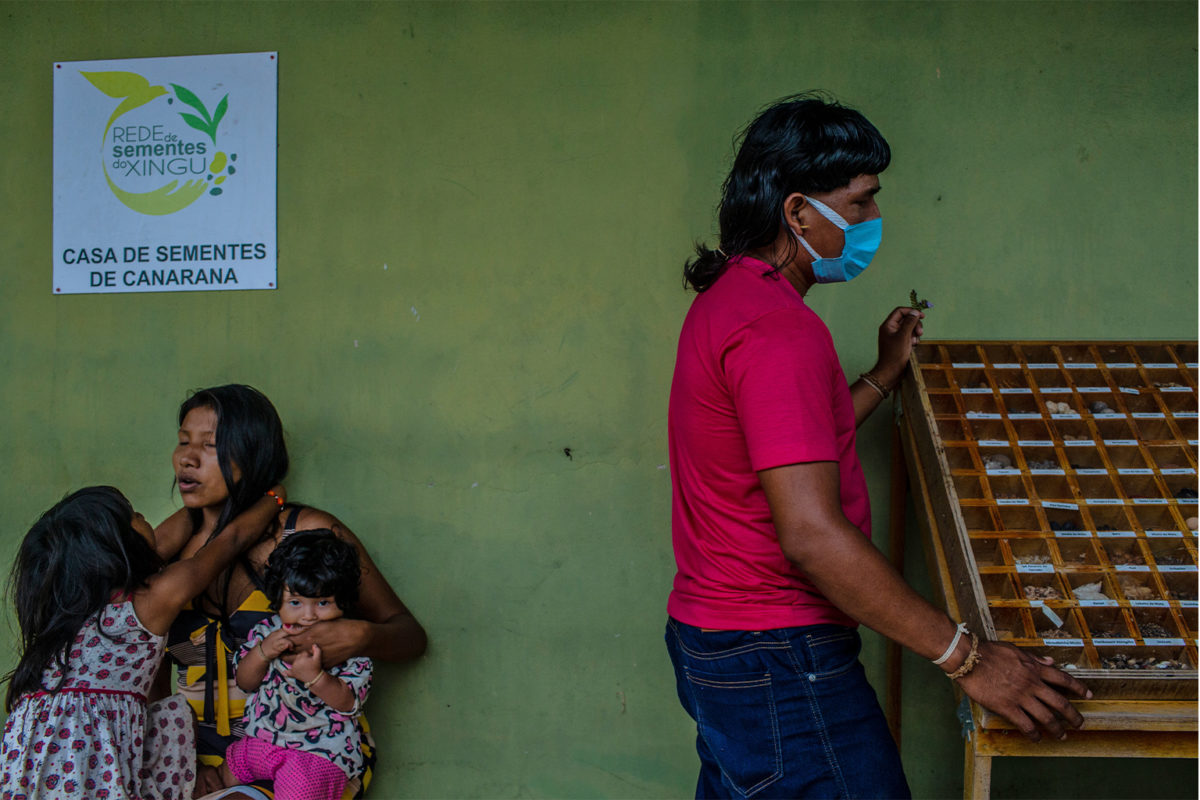 Bruna Ferreira, RSX’s longtime director, concedes that the Sisyphean task of bringing forests back “sometimes seems hopeless.” But she said in an interview that their accomplishments shouldn’t be judged entirely by the minuscule percentage of deforested land restored. The effort is “a work of resistance, making these communities stronger.”

Yes, restoring the Cerrado seems mostly a labor of love, Neusa said. But, she continued, it’s worth it. “If you love the Cerrado, it gives back to you.”

After the chief, his daughter and the other women returned to their village, they had more work to do. Djanira Pe’Wee Xavante culled through the murici fruit she’d brought back, picking out the best for eating, snapping off the rotten parts and leaving the seeds out to dry.

Not far from her, a huge field of soy carved out of thick Cerrado forest on Xavante land suggests that love alone won’t protect Mato Grosso’s remaining jungle. It’s flat as a tabletop and featureless apart from endless rows of identical soybean plants and lines left by farming machines as straight as rules on writing paper.

Chief Xavante says angrily that this farm, like the lime mine, was permitted by one of the many Xavante chiefs who think that the money they can earn now is more important than a healthy forest.