Soy and cattle team up to drive deforestation in South America: Study

As the human population grows, so does our demand for food, and soy is one of the key crops meeting that demand. Found in far more than tofu, soy is the largest source of protein for animal feed (such as cattle) and the second-largest source of vegetable oil globally after palm oil.

The largest soy importer, China, saw a 2,000% increase in soy imports over the past two decades, with the majority going to feed livestock to meet the Chinese population’s increasing meat consumption.

“As long as the whole market is increasing meat consumption and developing countries are getting wealthier per capita and they’re changing their diets, we’re going to see soybean expand,” Matt Hansen, a professor in the Department of Geographical Sciences at the University of Maryland, told Mongabay.

Rising global soy production has led to the clearing of forests, especially in the tropics. More than half of the world’s soy is grown in South America, and between 2000 and 2019, the production of the crop on the continent has doubled, according to new research published in the journal Nature Sustainability.

The researchers used satellite imagery to identify areas of soy cultivation. Guided by this data, five teams drove around the continent to verify the extent of farms across all the biomes where soy is grown: the Amazon Rainforest, the Atlantic Forest, the Cerrado scrubland, the Chaco dry forest, the Chiquitania savanna, the Pampas grassland, the Pantanal wetland, and the Caatinga thorn-scrub forest.

The study reveals that soybean coverage in South America increased from 26.4 million hectares (65.2 million acres) in 2001 to 55.1 million hectares (136.2 million acres) in 2019, an area larger than the state of California. Most of this expansion happened in Brazil, which saw a 160% increase in the area of soybean cultivation, and Argentina, with a 57% increase in area. 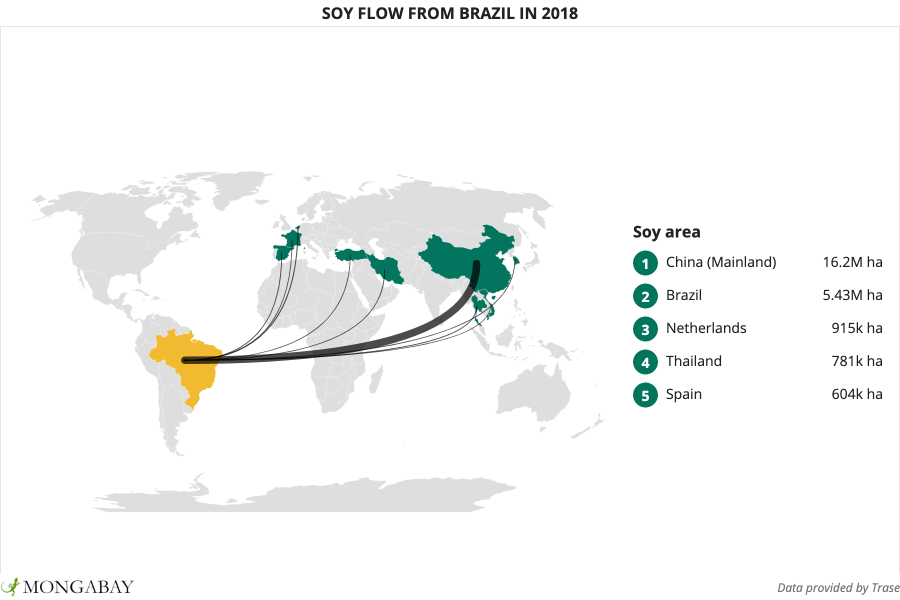 Over the past three decades, human impact on natural land cover in South America has averaged 8.1 million hectares (20 million acres) per year, which is equivalent to 21.6 soccer fields per minute. Roughly 40% of all landmass in South America has been impacted by human activity since 1985.

But tracking the rates of deforestation is just one part of the story, said Hansen, a co-author of the study. Knowing what land uses replace cleared forests can help clarify the economic underpinnings of deforestation. This data allows us to ask what crops or practices are causing deforestation.

“If you know what the underlying causes are and where the new frontiers are,” Hansen said, “you can start making plans around changing the story if the story is a bad one.”

The story in South America is that livestock pasture often comes first, followed by soy. Soybean farms are typically planted on old cattle pastures, and as soy encroaches, pasture is forced into new frontiers.

“Pasture actually acts like a sponge,” Hansen said, “it soaks up this soybean demand.”

As pasture frontiers march onward, so does soy, expanding from areas of traditional cultivation. In Argentina, soy is moving south into the Chaco. In Paraguay, soy farms threaten the Atlantic Forest. Soy is also replacing the Chiquitania forest of Bolivia and the Campos grasslands in Uruguay.

And in the Amazon, where soy has expanded the most, the moving frontier of pasture drives both deforestation and fires, which are set to clear deforested lands.

This interplay between beef and soy is simple to see, Hansen says, when you make a map of deforestation, land use and fires over time. This kind of data can help clarify what really is going on when things like a big fire year or the politicization of land use and commodities occur.

For example, when the fires in the Amazon caught international attention in 2019, France, the largest buyer of Brazilian soy flour in the European Union, said it would ban imports of soybean driving deforestation and subsequent fires.

However, this new research found that only 5% of forest loss was driven directly by soybean, meaning that the time between forest clearing and soy cultivation was less than three years. Most of this direct soybean-driven deforestation occurred in the Cerrado and in the Brazilian Amazon.

Soy farmers are not starting fires, Hansen says. “We’ve been out in the field with farmers who work really hard to use cover crops to build up organic layers in their soil to make their soil more productive and they hate fire … Fire is horrible for them. It destroys the soil.”

Yet soy remains an indirect driver of deforestation and fire, and the interplay of land use is the number one point, Hansen says. Policies addressing deforestation have to consider multiple commodities at once.

The public outcry over clear-cutting for soy cultivation led many large transnational companies, including Cargill, Bunge and Amaggi, to sign the voluntary Amazon Soy Moratorium, which banned direct conversion of the Amazon Rainforest for soy cultivation.

A recent study suggests that, between 2006 and 2016, deforestation was 35% lower than it would have been without the moratorium. But critics say this discounts the effects of indirect deforestation and spillover into other biomes. Because the moratorium only protects the Amazon, soy farms have moved into surrounding areas like the Cerrado savanna.

“The soy moratorium is a good example of a solution for one commodity in one place, but it covers only one biome, ignoring deforestation in the Cerrado and also the role of beef,” Vivian Ribeiro, a data scientist for Trase, told Mongabay.

Trase works to map the supply chains of commodities such as soy, beef and palm oil from where they are grown to the final buyer. This allows buyers to determine if their goods came from an area with deforestation.

Increasingly, companies are making private commitments to source from zero-deforestation supply chains. This is a promising strategy, Ribeiro says, but in order to work, the market needs to be more transparent. The goal is for companies to report that they are not sourcing from deforestation and to prove reliable monitoring, verification and reporting systems. “Transparency is the top thing,” she says.

“So what we’re trying to communicate to these actors is that by buying the product from some specific places, you’re exposed to deforestation,” Ribeiro said. “So if you really want, you can change the source of your production from a place associated with a lot of recent deforestation, which is basically the same as supporting deforestation.”

Previously Trase relied on regional, private, or governmental monitoring, but there were gaps in time coverage and for certain biomes. The data used in the Nature Sustainability study allows Trase and others to look at soy expansion using a standardized format on a continental scale, Ribeiro said.

Beyond these zero-deforestation commitments, Hansen says, we also need to designate “no-go zones” or areas of nature that are off-limits to any kind of development: ecosystems that exist to regulate climate, protect biodiversity, support Indigenous people, and for their own intrinsic value.

“Sometimes you have to say, ‘we’re not going to let any commodity go in,’” Hansen says. “I think that would be a better way to look at it.”