2020 was a rough year for tropical rainforest conservation efforts, as explained in Mongabay’s year-end wrap-up on rainforests. So what’s in store for 2021? Here are 11 things to watch.

The pandemic itself presented incredible challenges for conservation, including crushing ecotourism-based livelihood models, creating hardships for local communities and researchers, pushing NGOs to pull out of field projects, spurring a rise in the price of many tropical commodities that drive deforestation, and redirecting funding and attention from environmental law enforcement. But measures to jumpstart the economic recovery made the situation worse in some places. Peru provided stimulus money to companies involved with illegal logging, Indonesia passed a sweeping deregulation law and other programs that could unleash large-sale deforestation for oil palm plantations and coal mines, and countries from Brazil to Cambodia turned a blind eye to illegal forest clearing and encroachment. As part of their stimulus programs, several tropical countries are pushing potentially destructive large-scale infrastructure projects while relaxing environmental oversight at the same time.

But conservationists argue it doesn’t have to be this way. A number of reports published in 2020 have called the post-COVID recovery a unique opportunity to shift away from environmentally destructive business-as-usual practices, including transitioning away from fossil fuels, investing in conservation and protected areas, and working toward a more equitable and just society for people and the planet.

As we head into 2021, expect to see tension between these two competing approaches as countries grapple with how to recover from the crisis.

A second area to watch under the post COVID recovery theme is macroeconomic factors that can affect deforestation rates, like the weakening dollar, the flow of remittances into tropical countries, inflation rates, and commodity prices. The pandemic triggered a large outflow of people from cities to rural areas. This may be temporary, but if it’s not, then there are potential implications for deforestation associated with subsistence agriculture.

Transition of power in the U.S.

Donald Trump sidelined the United States when it came to collaborative global efforts to address environmental challenges, including pulling America out of the Paris Climate Agreement. His administration also undercut environmental policies from endangered species protection to management of wilderness areas, actively denied the realities of climate change, and encouraged authoritarian regimes that have targeted environmental defenders and journalists–all of which are detrimental to forest conservation efforts.

With Joe Biden promising to put climate at the center of administration policy, look for a reset from the United States. This could translate to more ambitious climate and biodiversity targets from the U.S. on the international stage, stronger environmental policies domestically, leadership in greener economic development, and more support overseas for conservation projects. But a lot rides on who controls the Senate and how willing Congress is to work with the Biden Administration on these issues.

From a policy standpoint, 2020 was a disastrous year for Indonesia’s forests. The omnibus bill that passed in October removed several key legal protections for Indonesian forests. The changes look to be a boon to the palm oil and mining industries.

The government also moved forward on two initiatives that could lock in deforestation for decades to come: a “food estate” program and a biofuels mandate, which together could drive the conversion of millions of hectares of forests and peatlands to plantations. Critics say the food estate program risks a return to militarized industrial agriculture and forestry operations at the expense of local communities and the environment, while the biofuels mandate could require establishing new oil palm plantations a fifth the size of Borneo. The biodiesel mandate would create a huge source of demand for palm oil that doesn’t need to meet international standards for avoiding deforestation or human rights abuses, countering corporate zero-deforestation policies and import restrictions imposed by the European Union. Nowhere would the impacts of these programs be greater than in Papua, where vast areas of primary forest are slated to be logged and converted into plantations.

Deforestation in the Brazilian Amazon topped 11,000 sq km for the 2019/2020 deforestation year, the highest level since 2008. Worse for Brazilian forests, the Bolsonaro Administration laid the groundwork for a long-term increase in deforestation with new infrastructure projects, evisceration of agencies that monitor and manage natural resources, dismantling of environmental laws, and legal and rhetorical attacks on Indigenous communities and civil society.

That being said, Brazilian government data from INPE showed a slowing of deforestation in the latter part of 2020 relative to 2019 (Imazon, an independent NGO, showed the opposite). Nevertheless the deforestation and fire trend for the Amazon is ominous, as is the Bolsonaro Administration’s policy in the region.

La Niña, the climate pattern that is the colder counterpart of El Niño, is forecast to run well into 2021.

La Niña is typically associated with wetter conditions in Indonesia and much of the Brazilian Amazon, reducing the risk of fire and drought, which could potentially mask some of the damage that’s being done by government policies in those two countries.

Scientists have been warning for years that the Amazon may be approaching a critical tipping point whereby large parts of the rainforest biome could shift to drier woodland or even savanna due to the combination of climate change, deforestation and forest degradation. In 2020 there were more indications that this transition is already underway, with the region experiencing widespread dry conditions, dry habitat species appearing in normally humid tropical rainforests, and increasing incidence of fire. Drying trends have also been observed in the Congo Basin and parts of Southeast Asia.

As noted above, La Niña is expected to continue into 2021, bringing wetter-than-normal conditions, which mean some of these effects may not be as apparent. But watch for scientists to release more research on how these trends tracked in 2019.

As noted in the year-end review, the governments of Switzerland and Peru signed a carbon offsetting deal under Article 6 of the Paris climate agreement in October 2020. Switzerland will get carbon credits generated by financing sustainable development projects that reduce greenhouse gas emissions in the South American nation. Norway, which doesn’t get carbon credits from its climate and forests initiative, but nonetheless tracks avoided carbon emissions as the basis for its tropical forest funding, increased the rate it pays tropical countries to protect rainforests in November.

In 2021 watch for more of these kinds of government to government agreements as well as criticism from actors who object to carbon offsets and “market-based approaches” to forest conservation.

Assessing the impact of COVID on rainforests

With advances in remote sensing and data processing capabilities, forest monitoring was better in 2020 than it has ever been before. Nonetheless, there is still a processing delay so we don’t yet have a clear, comprehensive picture of how forest loss in 2020 compared to 2019. Anecdotally, 2020 looks like it will be a high deforestation year, but we should get better numbers in the first or second quarter of 2021.

The timeliness and quality of satellite data should get a boost in 2021 after the Norwegian government funded three satellite monitoring technology groups — Kongsberg Satellite Services, Planet, and Airbus — to provide free access to high-resolution satellite imagery of the tropics.

Voluntary zero deforestation commitments (specifically “No Deforestation, No Peatlands, and No Exploitation” policies) took off in the 2010s, but analysis published in 2020 by ZSL indicated that companies are far behind on implementing what they promised. So in 2021 we’ll see a shift from voluntary efforts to government mandated compliance.

We saw the groundwork for such developments laid in 2020. The U.K. government put forth a law that would make it illegal for large companies operating in the country to use commodities produced from land that was illegally deforested, while France, which pledged in 2019 to stop “deforestation imports” by 2030, continued to move forward on its National Strategy to Combat Imported Deforestation, announcing it aimed to stop importing soy from Brazil. In a November referendum, voters in Switzerland narrowly rejected the Responsible Business Initiative, which would have held Swiss businesses — think Nestlé or Glencore — financially and legally liable for human rights violations or environmental damage wherever it occurs.

Even the Trump Administration had started to look at issues related to forest risk commodities. On December 30, 2020, U.S. Customs and Border Protection started detaining palm oil products produced by Malaysia palm oil giant Sime Darby due to allegations of forced labor on its plantations.

This push however may cause friction with trade partners. Last year a row arose between French president Emmanuel Macron and Brazilian president Jair Bolsonaro over deforestation and fires in the Amazon. And Malaysia and Indonesia have been furiously lobbying the E.U. in recent years to allow biodiesel derived from palm oil count toward renewable fuel standards. Both Malaysia and Indonesia are now working to overcome the loss of that market by scaling up national biofuel mandates, which are expected to become a huge source of new demand for palm oil that need not meet corporate ZDPE commitments or European government standards.

2020 was a particularly ugly year for environmental defenders, hundreds of whom were threatened and killed in countries around the world. There are few indications that the situation is likely to improve in 2021 given the degree to which the pandemic has strengthened the resolve and capacity of authoritarian regimes and repressive governments to crack down on dissent. However, 11 countries in Latin America and the Caribbean have now signed the Escazú Agreement, which means the treaty that links environmental protection to human rights in the region will enter into force in early 2021. 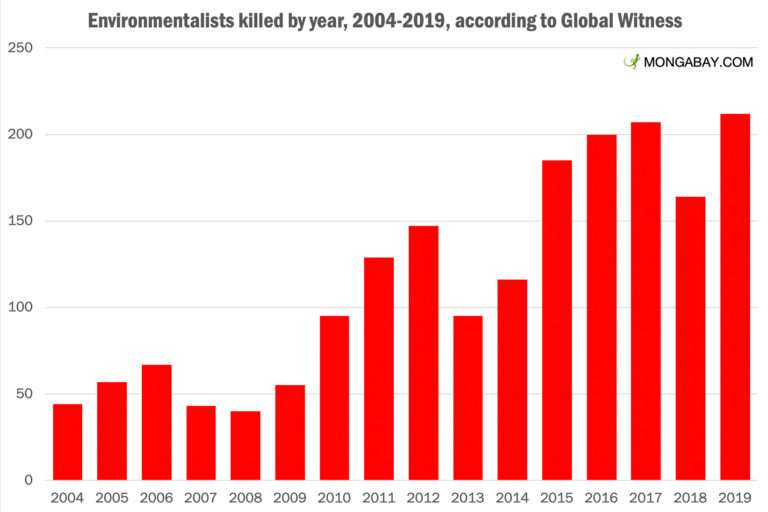 Another issue to watch in 2021 is whether the movement to address systemic social injustice consolidates its 2020 gains or fades in the public’s attention. The protests that erupted in the aftermath of the George Floyd killing in the United States catalyzed movements around the world from New Guinea to the Amazon, but there’s no certainty that the momentum can overcome the repressive response in many countries or the resurgence of the pandemic. Progress may be more resilient within conservation organizations, where there is now much greater awareness around systemic racism, abusive power dynamics, and colonial legacy than a year ago.

The pandemic caused the postponement of the bulk of the agenda-setting climate and biodiversity meetings scheduled to occur in 2020. We now live in a Zoom world, but depending on vaccine rollouts progress, some of these meetings may occur in-person in 2021.

There are plenty of other issues and geographies to watch in the coming year, from tree-planting campaigns to elections in Latin America to developments in the world’s second largest rainforest in Central Africa, but I’ve drawn the line for this list at eleven. Please see the 2020 year in review for a more comprehensive look at recent news and trends in the world of rainforests.

How did we do last year?