As COVID-19 wreaks havoc on the world’s people and the global economy, a group of international researchers is looking to the future. Their ground-breaking work underscores the immense economic benefits of expanding global protected areas to include 30% of the world’s land and oceans in order to accelerate recovery from the pandemic.

The report, authored by more than 100 economists and environmentalists for the advocacy group Campaign for Nature and published earlier this month, claims to be the first analysis ever to measure the economic benefits and costs of protecting 30% of the planet’s land and seas. The U.N. Convention on Biological Diversity included this 30% protected area goal as part of its ten-year conservation strategy which is expected to be ratified by 196 countries at an international summit in Kunming, China, next year.

Governments, non-profits and other institutions are currently spending about $24 billion annually on protected areas. This dollar amount would need to be boosted to roughly $140 billion to meet the 30% goal by 2030, say the researchers. Currently, about 15% of the world’s land and 7% of oceans have some degree of protection, the report revealed.

This major boost in funding would be used to better maintain and manage existing protected areas, and in some cases, to support national governments in the purchase of land from private owners in order to conserve it, said Enric Sala, one of the paper’s coauthors and an Explorer in Residence at the National Geographic Society.

“This pandemic has shown the costs of our [current] relationship with nature,” Sala told Mongabay, referencing how the coronavirus is thought to have spread to humans from bats in China.

“What is the cost of this pandemic?” Sala asked. “The latest IMF estimates are $9 trillion for the next two years. How much does it cost to protect 30% of the planet? $140 billion annually. Prevention is cheaper than responding to a crisis.”

The U.N. and World Health Organization and WWF International agree that maintaining our current course, the nearly wholesale destruction of nature — obliterating wildlands and increasing proximity between wildlife and humans — will almost certainly bring more pandemics in future if action isn’t taken now.

But the benefits of 30% conservation extend beyond disease prevention. Increasing land and marine protected areas would boost ecotourism, while allowing declining fish stocks to regenerate, Sala said. Economic gains made by fisheries, tourism and other sectors would generate $250 billion in extra economic activity, compared to today, the researchers estimate.

Increasing the amount of protected land would also generate enhanced ecosystem services related to climate change mitigation, soil conservation, protection from floods and cleaner water, the report says. The value of these ecosystem services compared to today’s status quo would come to about $350 billion annually.

When both the economic and ecosystem service benefits of expanding protected areas are totaled, the paper said the gains resulting from meeting the 30% target outweigh the costs by a ratio of at least five-to-one.

The costs of expanding protected areas represent less than one-third of the amount that governments spend on subsidies to various activities that destroy nature, such as oil extraction, Sala noted. The total cost of protecting 30% represents 0.16% of global GDP, he added, requiring less investment than global consumers spend annually on video games.

“Increasing nature protection is sound policy for governments juggling multiple interests,” Cambridge University conservation researcher Anthony Waldron, the paper’s lead author, said in a statement. “You cannot put a price tag on nature — but the economic numbers point to [the urgent need for] its protection.”

Some countries have already met or exceeded the 30% target, including Bolivia, Germany, Namibia, Poland, Tanzania, Venezuela and Zambia, according to World Bank data. But other nations have work to do, or are going in the wrong direction. Brazil, for example, guardian of the world’s largest remaining rainforest, has nearly achieved the target with 29.4% of its lands considered protected, according to 2018 World Bank data. However, escalating deforestation there since January 2019 under the government of President Jair Bolsonaro has undermined conservation in the country. 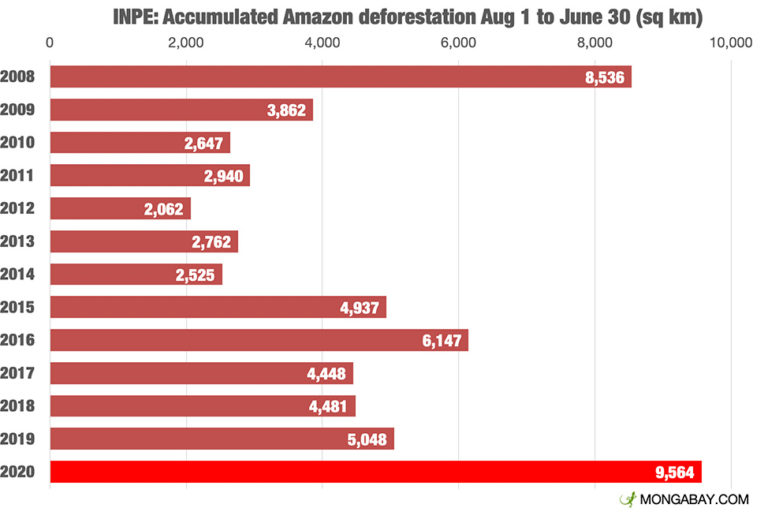 In fact, data released by Brazil’s National Institute for Space Research (INPE) found that deforestation in the Amazon has increased 89% compared to last year under Bolsonaro. INPE’s satellite-based deforestation alert system detected 1,034 square kilometers of forest clearing during June 2020 alone. The extent of deforestation over the past year is the highest recorded since INPE started releasing monthly statistics in 2007.

And things could get a lot worse, fast. Earlier this year, the Bolsonaro administration opened 9.8 million hectares (37,830 square miles) of traditional lands claimed by Indigenous peoples to loggers, cattle ranchers, soy growers, and other outsiders.

Peter Veit, who directs the land rights program at the Washington-based World Resources Institute and wasn’t involved in producing the recent paper, said the report’s broad conclusions on the value of expanding protected areas are laudable.

But he isn’t convinced traditional protected areas administered by governments are the most cost-effective approach for meeting the 30% U.N. conservation goal by 2030. “I have seen estimates on what it costs to manage protected areas over the long term… those costs are quite high,” Veit told Mongabay. “From a cost effectiveness prospective, it is much better to support Indigenous people than to create protected areas governments have to manage at high costs.”

Veit recommends that conservation groups work in tandem with Indigenous communities to improve formal recognition and titling of their traditional territories. “It is much less expensive for indigenous people to manage their lands.”

He also questioned elements of the report’s economic analysis on the financial benefits of expanded protected areas. “Not every place can become a world class ecotourism site,” he noted.

But despite ongoing debate over the effectiveness of different types of conservation policies and practices, there is little disagreement on the benefits protected areas offer for human health. A 2019 study by Australian researchers published in the journal Nature Communications estimated the economic value of protected areas around the globe, based solely on improved mental health for visitors — the total came to $6 trillion annually.

“The cost of creating a resilient, planetary safety net for all life on earth barely even registers as a statistical rounding error,” Jamison Ervin, the manager for the Global Programme on Nature for Development, U.N. Development Programme, said in a statement following the report’s release.

“The benefits to humanity are incalculable, and the cost of inaction is unthinkable,” concluded Ervin.