Rainforests: storylines to watch in 2019

2018 wasn’t a great year for tropical rainforests, with major conservation setbacks in Brazil, Democratic Republic of Congo, Madagascar, and the United States coming on top of back-to-back years of high forest cover loss. Here are ten storylines we’re watching in the world of rainforests as we begin 2019.

Is something missing? Please feel free to add as a comment using the function at the bottom of the post.

Jair Bolsonaro campaigned on a platform that included dismantling environmental protections, revoking indigenous peoples’ rights, and pulling Brazil out of the Paris climate accord. Yet despite winning in a landslide with strong support in rural areas, he has softened his rhetoric to a degree and it remains to be seen how closely he adheres to his original positions. If he does stick to his guns, it could be very bad news for the Amazon rainforest, which is already facing a number of challenges, including rising deforestation, increased incidence of drought and fire associated with climate change, and accelerated demand from China for Brazilian agricultural exports due to the Trump Administration trade war.

Under Bolsonaro, Brazil could rollback environmental safeguards around infrastructure projects, revive mega-dams in the Amazon, loosen the Forest Code, reduce the extent of protected areas, scale back forest monitoring and environmental law enforcement, and cut fines for illegal deforestation. Environmental activists, journalists, and indigenous leaders may find themselves in increased danger with the shift in political discourse. 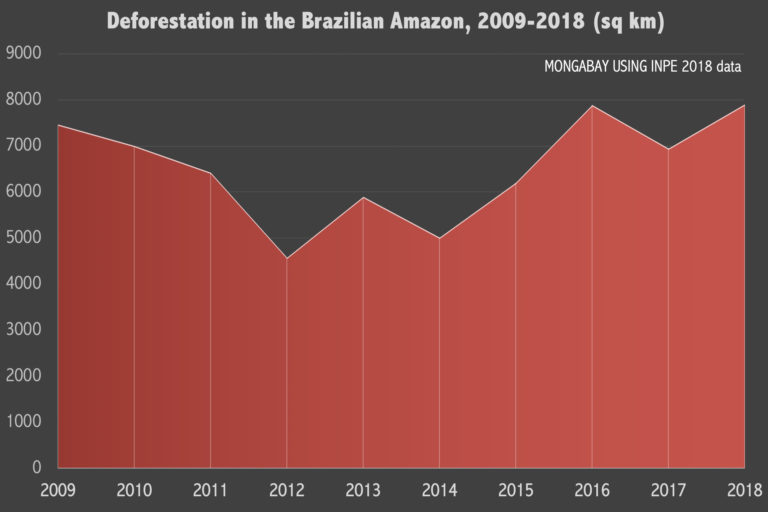 40 governments, 20 sub-national governments, 57 multi-national companies, 16 groups representing indigenous communities, and 58 non-government organizations have pledged under the New York Declaration on Forests to halve deforestation by 2020, but indications are that these parties are not on track to meet the goal. That means 2019 could be a year of furious activity on zero deforestation commitments and other efforts to reduce deforestation.

Concerns about the health of the global economy grew toward the end of 2018. A slowing global economy could have mixed effects on tropical forests, with less money available for conservation and sustainability programs, but also short-term relief in the form of lower commodity prices. Commodities, especially palm oil, took a beating in 2018, which may have contributed to the strengthening of certification standards, like the RSPO adopting zero deforestation.

Indonesia holds a presidential election in 2019 which features a rematch between the incumbent Joko Widodo, often known as “Jokowi”, and Prabowo Subianto, a former general. Jokowi has generally been seen as a positive force for forest conservation and sustainable management in Indonesia during his time in office, whereas Prabowo is viewed as representing the “old guard” which would be more supportive of business-as-usual approaches to forests, meaning favoring industries that drive deforestation.

Notably, the Indigenous Peoples Alliance of the Archipelago (AMAN), which advocates on behalf of Indonesia’s indigenous communities, has decided not to endorse either candidate in an expression of dissatisfaction over the slow progress in recognizing indigenous peoples’ land rights following a landmark constitution court decision in 2013.

Democratic Republic of Congo held an election on December 30th. Early indications are the election was not free or fair, raising the specter of unrest, which could impact Africa’s largest rainforest, where deforestation has been on the rise.

With palm oil price at the lowest price in more than a decade, governments of producing countries are keen to prop up demand via biofuels mandates. Indonesia plans to move forward with a B20 biodiesel mandate that would require fuels to be 20 percent bio-content (e.g. palm oil), while Malaysia increased the minimum biodiesel blend from 7 percent to 10 percent last month. The environmental standards for palm oil used in biofuel blends are minimal, enlarging the market for palm oil that might not meet RSPO criteria or fall outside the bounds of zero deforestation commitments. Outside Malaysia and Indonesia, look for continued debate over transport fuels policy in the E.U., which currently has a cap on palm oil that phases into a ban by 2030. Norway has recommended a ban on biodiesel that carries a “high deforestation risk”. 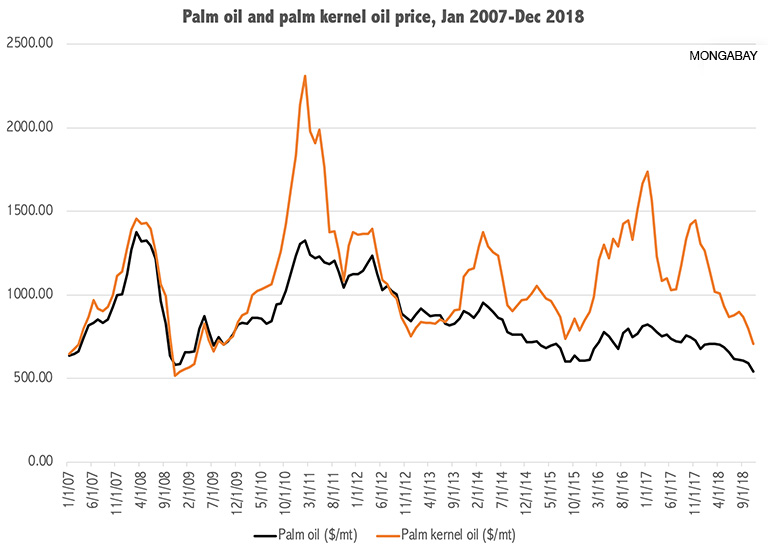 In April, California is scheduled to decide on its delayed Tropical Forest Standard, which could pave the way for carbon offsets from international forest conservation projects (e.g. REDD+ credits) to be included in the state’s cap-and-trade program. If the standard is approved, it could set in motion wider adoption of carbon conservation offsets under compliance-based carbon emissions reductions programs both in the U.S. and internationally. The measure has been contentious.

Satellite-based remote sensing capabilities continue to advance but there remain important gaps in measuring and protecting biodiversity. Look for progress in addressing these gaps via bioacoustic systems, camera traps, and other ground-based sensors as well as continued application of artificial intelligence (AI) to addressing conservation challenges.

Republicans’ two-year control over the legislative and executive branches of the U.S. government officially came to an end yesterday with the Democrats taking control of the House of Representatives. What this means for rainforests internationally is uncertain. The Trump Administration’s efforts to cut funding for programs that support international conservation and Earth observation systems have been mostly thwarted by Congress, but the president himself has been a vocal opponent against U.S. action against climate change and other initiatives that are important to protecting rainforests. Whether or not a bipartisan proposal to implement a carbon tax makes headway under a divided Congress and a president who’s increasingly under pressure from Democrats could be one of the most important environmental policy stories of the year in the U.S.

The Conference of the Parties of the Convention on Biological Diversity (CBD) developed the Aichi Biodiversity Targets in 2009, ahead of the United Nations Decade on Biodiversity. With under two years remaining before countries are supposed to meet those targets, stakeholders are thinking about the next framework and whether it’s possible to increase targets at the 2020 convention in China. Conservation advocates are looking at 2019 as a pivotal moment for scaling up global awareness — and action — on biodiversity decline.