The rains arrived in Brazil’s Pantanal wetlands in October and are helping put out fires there, but the destruction this year has been immense. A staggering 28% of the biome was consumed by fire according to the Laboratory for Environmental Satellite Applications at the Federal University of Rio de Janeiro, killing and injuring thousands of animals, likely including iconic wildlife such as jaguars and tapirs.

While this harm is partly due to severe drought in the first part of the year, maybe intensified by escalating climate change, other factors were equally or more important, including illegal deforestation, alleged arson by cattle ranchers and lack of planning to combat the fires, according to Alcides Faria, executive director of the NGO Ecoa (Ecology and Action), who spoke to Mongabay, along with other experts.

Meanwhile, in the Amazon biome, located to the Pantanal’s north, Brazil’s recently formed Amazon Council (headed by General and Vice President Hamilton Mourão), was accused of unpreparedness in coordinating operations against environmental destruction, particularly deforestation, and in fighting this year’s record fires, according to an IBAMA agent who participated in the operations led by the Armed Forces in the Amazon and who spoke to Mongabay on condition of anonymity.

At the same time, environmental agencies IBAMA and ICMBio have suffered successive losses of financial resources — the federal government has already cut the agencies’ greatly reduced budgets for 2021 by 4% and 12.8%, respectively. Environment Minister Ricardo Salles has further closed off the funding spigot by spending only 0.4% of the ministry’s environmental policies budget between January and August 2020.

Simultaneously, the Brazilian Armed Forces, who were deployed to the Amazon by President Jair Bolsonaro in May to fight environmental crimes as part of Green Brazil Operation 2 (GBO2), have been found to be using a portion of the money originally destined to fight Amazon deforestation to upgrade their units.

Up to September 24, the 47th Infantry Battalion spent R$ 2.1 million (US $375,000) of the GBO2 total budget (R $418.6 million; US $74.7 million) — for unit improvement in Coxim, Mato Grosso do Sul, a locale far distant from the Amazon, according to documents registered by the National Treasury. The money went, among other things, to roof, flooring and door renovations for unit buildings. Other military bases are said to have seen similar improvements.

With abundant GBO2 resources at its disposal, the Army also spent R $8.9 million (US $1.5 million) on a two-week-long “war game” military exercise in Amazonas state, close to the border with Venezuela, in which a “red” country invaded a “blue” one. More than 3,500 military personnel participated, and the amount spent — on ammunition, fuel, flight hours and transportation — was unprecedented as compared to past Brazilian Armed Forces exercises.

“International economic pressure [due to] the environmental issue forced the Bolsonaro government to act, and [it] positioned the Army as the savior of the Amazon. But the environmental agencies remain depleted,” Alexandre Gontijo told Mongabay; he is an IBAMA researcher and president of the Environmental Specialists Career Servers Association.

“Nothing against the Armed Forces; sometimes they work as partners providing security and logistics in critical areas, added Gontijo. “In terms of monitoring and intelligence, though, in the use of satellite images, they have not shown effectiveness in reducing deforestation and fires.” 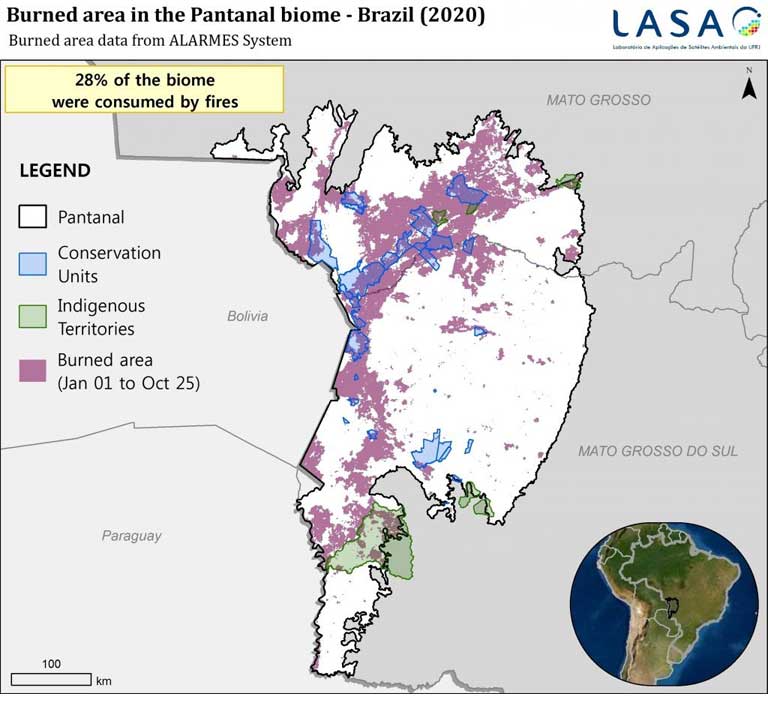 In a region like the Pantanal, where logistics are complicated due to long distances and few existing roads, IBAMA’s Prevfogo, a federal environmental program, only started hiring temporary firefighters in April, when the biome was already in calamitous trouble. In that month, fires razed 2,500 hectares (6,177 acres) of the Baía Negra Environmental Protection Area (APA), which only totals 5,400 hectares (13,343 acres) in Mato Grosso do Sul state.

“It is surprising that the federal government did not act according to a previously organized plan to fight fires. Everyone knew that 2020 would be a year of environmental disaster, as it rained very little at the end of last year. Prevfogo should have been in charge of the coordination, with the assistance of municipal administrations (which did very little this year), and state governments. Instead, it acted in a disorganized way and it was a huge disaster,” Ecoa’s Faria told Mongabay. Created in 1989 in Mato Grosso do Sul, the NGO trains volunteer firefighters and runs annual campaigns against fires in the Pantanal.

“More brigadiers [leaders] should have been hired this year, and equipment like hoses, water pumps and boats were lacking. The Armed Forces should also have better supported the firefighters in the logistics area. When the resources arrived, they arrived late,” said Faria.

Of the 135 brigade members who worked in Mato Grosso do Sul this season, only 45 arrived to fight the September fires. In adjacent Mato Grosso state there were 116 brigadiers leading the firefighting effort, ten from that state and 106 from other parts of the country.

According to Faria, founder of Ecoa, the brigadiers should have been hired by January 2020 in order to train new firefighters before the Pantanal dry season, and to perform fire prevention as well, removing potentially flammable undergrowth. Once dry, it is more susceptible to catching fire.

“Firefighters are heroes, and they only earn a monthly salary of R $1,045 [US $186] in a temporary job. They should be hired on a permanent basis, just as municipal brigade posts need to be created, especially now with increasingly extreme weather phenomena,” he said.

The Army’s role in the Amazon

The government rationale behind the diminishment of IBAMA’s key environmental role and the Armed Forces deployment to fight against Amazon deforestation and fires remains unknown, say critics.

“The Army and Navy are trained for war, not to inspect and monitor the environment,” an IBAMA inspector, who preferred to remain anonymous, told Mongabay. “During the [environmental] operations, we had to train some military men because very few in the Army know how to use information from satellite remote sensing.” Under the Bolsonaro government, IBAMA’s leadership positions are now occupied by military policemen, also without environmental expertise.

Before the Amazon Council began to command operations in May 2020, IBAMA defined their environmental operation targets based on data analysis of INPE’s (National Institute for Space Research) Deter satellite monitoring system. “We used to find the most deforested places and gave them priority, profiling all their characteristics and possible occurrences. Now nobody knows what the priorities are,” said the anonymous IBAMA agent.

After his time working with the Army in the Amazon, the IBAMA agent concluded that the military fails to consider key points where major deforestation and fires are taking place, and focus action there. “I don’t understand why they choose a particular location over areas that are most affected, and why they keep changing them,” he said.

In one operation, for example, IBAMA’s military leadership headquartered in Brasília changed its mind about the proposed target of an environmental operation six times, shifting back and forth between two Amazonian states. In the end, inspections were carried out in two municipalities. Between the two actions, the IBAMA team of seven inspectors were delayed three days at a hotel, while 70 military personnel set up a last-minute base, with kitchen, beds and a washing machine, for a 15-day operation.

“All the [satellite] spatial information on deforestation and CAR [Rural Environmental Registry] data from the [land] owners in a certain area were wasted every time there was a change,” said the IBAMA inspector.

Like the Brazilian president, who declared in September at a United Nations virtual meeting that Brazil’s Indigenous people were responsible for spreading Amazon fires, the government of Mato Grosso do Sul, recently accused local riverine residents of causing the Pantanal fires. When Ecoa denied the claim and said the state government had not acted preventively against the destruction, numerous attacks against the NGO were carried on websites and social media networks.

“Basically, there is a lack of interest [by those governments] in our nature and people. And when the [environmental] situation gets worse, they try to show that they are concerned,” said Faria.

“The federal government should take advantage of the environmental agencies’ expertise and experience and give them good conditions to apply that knowledge to fight the biome’s destruction. And [the government] should be getting ready for 2021, instead of self-promoting themselves, appropriating the few [positive] results we obtained in the operations this year,” said the IBAMA agent.

In a communique released in September, the government wrote: the “Green Brazil 2 Operation, [conducted by] the Ministry of Defense, which works to combat and suppress environmental crimes in the Legal Amazon, has intensified the application of fines for environmental crimes in the region. In recent days, the number of fines increased by 15%, to R $520 million [US $92.9 million] collected. This amount exceeds the results obtained in Green Brazil 1, held in 2019.” However, environmental fines in Brazil are rarely if ever collected.

According to Brazilian federal law, the only bodies that can impose environmental fines are the ones linked to Sisnama (Brazil’s National Environment System), including: IBAMA, ICMbio, and environmental state secretariats and municipal governments that are part of that system. The Army isn’t included in this designation.

Contacted by Mongabay via email and phone, the Vice Presidency of the Republic did not respond to a request for an interview.