Huge swaths of Brazil’s Amazon rainforest are drier than usual after a rainy season with rainfall index well below historical levels, raising concerns about a further spike in wildfires and deforestation as the dry season approaches.

Data from NASA and the Brazilian National Institute for Space Research (INPE) points to stressed climate conditions: the soil is drier, temperatures are higher, and groundwater is depleted. Peak rainy season, which runs from December to February, was among the top 10 worst on record this year, with just 75% of the season’s usual rainfall.

Last year, wildfire and deforestation in the Amazon hit the highest levels in a decade. But the flames were contained by the rainforest’s natural humidity after several months of intense rainfall.

This year, the rainforest may not be so lucky.

“It’s very worrisome, it could be that there are much more fire events than what we saw last year, and earlier in the season,” Daniel Nepstad, a forest ecologist and president of the Earth Innovation Institute who has studied rainforest resistance to drought, told Mongabay.

Since taking office in January 2019, Brazil’s President Jair Bolsonaro has scaled back environmental protections and pushed to change the country’s legislation to open up indigenous reserves to mining and other development activities that are the main drivers of Amazon destruction.

The government has also cut down on environmental raids amid the COVID-19 pandemic, opening the doors to increased deforestation, wildcat mining and land grabbing. As a result, deforestation this year increased 51% through March compared to the first quarter of 2019, according to INPE. The deforestation figure for August 2019 to the end of March 2020 is reportedly nearly twice that of the same period a year earlier.

Adding a drier climate to the mix, experts warn, may be lethal for the forest, intensifying forest dieback and allowing more untouched, healthy forest to catch fire in the long term. 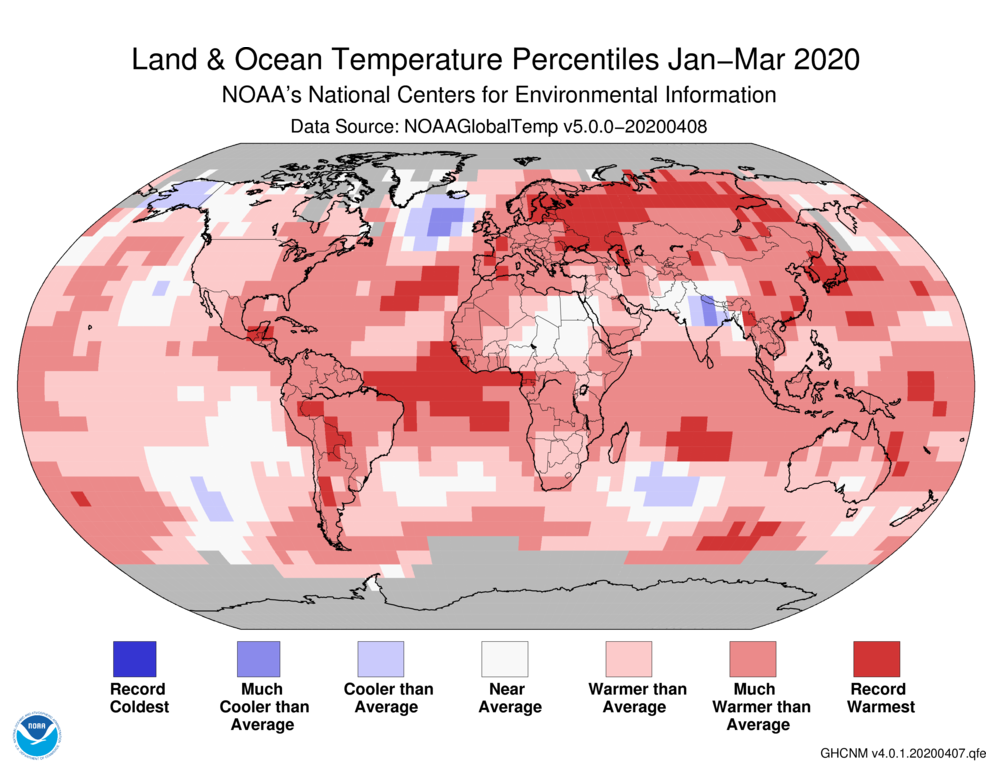 Temperature records show the entire Amazon biome at temperatures much warmer than average from January to March of 2020. Map image by the United States National Center for Environmental Information

Although weather forecasts for the Amazon are highly unpredictable, which could potentially reverse the current deficit, climate models by Brazil’s Center for Weather Forecasting and Climate Research (CPTEC) show no indication of above-average precipitation in the coming months. “We are entering a drier season where rains are not [usually] intense enough to impact the potential for fire and other factors related to the dry season,” CPTEC climatologist Diego Jatobá told Mongabay.

Recent GRACE-FO images of South America have shown large areas of Brazil’s Amazon and  Cerrado biomes in the deep red zone, meaning water levels are severely impacted. “If we see normal to low precipitation this year, then there is potential for drought,” Rodell told Mongabay in a telephone interview. “I would be concerned.”

But for Ane Alencar, the head of the Amazon Environmental Research Institute (IPAM) and a specialist in rainforest wildfires, an increase in fires this year depends far more on political decisions than climate conditions, which she expects will be within an average range. “I have the worst possible expectations about uncontrolled human-induced deforestation and fire ignition this year. Spontaneous combustion doesn’t exist in the Amazon,” she told Mongabay.

An El Niño system, the cyclical climate event that causes intense droughts in the Amazon, is highly unlikely this year, Alencar added. “In an El Niño year, one human-induced fire can turn into a hundred. That’s not what we’re looking at this year.”

A technical report by IPAM published this week also anticipates a surge in fires caused by the deforestation spike of 2019, as the modus operandi of land grabbers is to deforest one year then set fire the next, in order to successfully transform forest into farmland and pastures.

In the area around the city of Santarém, which already has the highest deforestation rates in the Amazon, fires and land clearing may also spike after the recent paving of the BR-163 highway that cuts through the Amazon rainforest, described by Bolsonaro on Twitter as “at the heart of agribusiness.”

“With the paving of the highway, there may be more land speculation in the region. And with less rain, it becomes easier to deforest because machinery can enter the forest,” says Marcos Heil Costa, one of Brazil’s top climate scientists and a researcher at the United Nations Intergovernmental Panel on Climate Change (IPCC).

The gradual drying of the Amazon has concerned scientists for decades, as it threatens to set off a cycle of forest dieback that may push the rainforest over its tipping point, turning rainforest into degraded savanna. In recent years, extreme weather events like droughts and floods have increased and published data show dry seasons getting longer and more severe.

But figures on the Amazon rainy season are new. According to rainfall data shared with Mongabay by CPTEC, eight of the 10 driest rainy seasons in Brazil’s northern region recorded since 1962 happened after the year 2000. “We have observed a negative trend, a significant sign of reduction in rain through the years,” CPTEC scientist Jatobá told Mongabay.

Nevertheless, there is still some hope for reversing the current scenario. According to Nepstad, some steps are already being taken by a part of the agribusiness sector to encourage farmers to plant trees. “Farmers are on the hook to plant 6 million hectares (14.8 million acres) in the next 20 years, but they often don’t have enough money or incentives to do this. This is part of the solution,” he said.

“There tends to be a sort of fatalism … but there are management interventions that can prevent this horrific scenario of forest dieback.”

Update (April 23, 2020): An earlier version of this article said Brazilian farmers are on the hook to plant 6,000 hectares to reverse the current climate scenario in the Amazon; the correct figure is 6 million hectares.

Banner image: Aerial view of a large burned area in the city of Candeiras do Jamari in the state of Rondônia. Image by Victor Moriyama/Greenpeace