Deforestation in the Brazilian Amazon surged more than 30 percent over the past year according to official data published today by Brazil’s National Space Research Institute, INPE. The data, which confirms the trend detected by multiple deforestation alert systems in recent months, shows that forest clearing in Earth’s largest rainforest stands at the highest level since 2008.

Pará has now lost more than 62,000 square kilometers of Amazon forest since 2004, an area the size the nation of Georgia or the U.S. state of West Virginia. The majority of forest clearing in the Amazon is for cattle pasture. 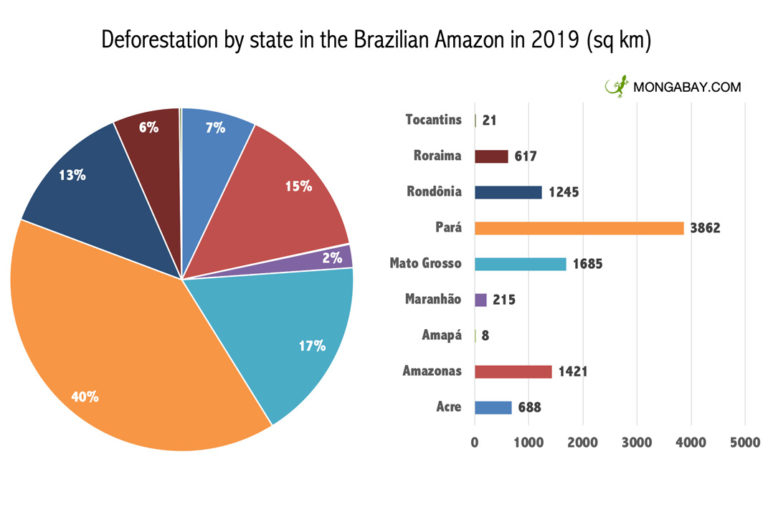 The new figures generally exclude areas of forest recently lost to fire, which is potentially significant given the extent and severity of fires in August and September 2019. These fires made global headlines when smoke blackened the skies of Sao Paulo, spurring widespread outcry and calls to boycott Brazilian agricultural products.

When fires were at their peak, scientists, conservationists, indigenous rights groups, and environmental activists blamed roll-backs of environmental protections and anti-environmental rhetoric by the Jair Bolsonaro administration for worsening the situation.

After initially denying this year’s fires were a problem, and then shifting blame for the blazes to NGOs, Bolsonaro sent in the military to fight fires. But critics say the administration still hasn’t reversed course on its push to cut environmental regulations and encourage conversion of vast swathes of the Amazon for industrial agriculture, mining, and logging. Those complaints suggest that the underlying issues driving the increase in deforestation haven’t been addressed.

Scientists have warned that should deforestation continue on its current trajectory, Brazil is unlikely to meet its climate commitments. While deforestation in 2019 only amounted to about 0.3 percent of the forest remaining in the Brazilian Amazon, Brazil’s climate targets are predicated on reducing deforestation. But deforestation has now more than doubled since its low of 4,571 square kilometers (1,765 square miles) in 2012.

Researchers are also alarmed that ongoing deforestation in the Brazilian Amazon could have long-term implications for the health of the biome and the wider functioning of critical ecosystem function in the region. Some models suggest the Amazon may be near a tipping point where the combination of deforestation and rising temperatures could trigger a rapid shift in rainfall patterns across vast parts of the Amazon Basin. Such a shift could lead to a die-off scenario where large areas of rainforest could be replaced by a drier woodland savanna akin to the Cerrado ecosystem south and east of the Amazon. Reduced rainfall would affect water availability in southern South America, including the continent’s agricultural heartland and largest cities from Sao Paulo to Buenos Aires.

Header image: Aerial view of a large burned area within the rural portion of Candeiras do Jamari municipality in Rondônia state. Image by Victor Moriyama / Greenpeace.