Cattle ranching in Brazil is the leading driver of deforestation-related carbon emissions across Latin America, according to research published in Global Environmental Change. Deforestation-risk data associated with Brazilian cattle ranching is documented on Trase, a deforestation and commodities monitoring Internet platform created by the Stockholm Environment Institute and Global Canopy (an NGO).

The Global Environmental Change study found that 40 percent of carbon emissions in the tropics stem from Brazil and Indonesia, with cattle production driving most deforestation-related emissions in Brazil; and oilseeds, including palm oil and soy, accounting for significant emissions in Indonesia.

Palm oil, according to the study, accounts for roughly half of Indonesia’s deforestation-related carbon dioxide emissions. Trase’s new data tracks beef, offal and live cattle exports from Brazil, finding that, between 2015 and 2017, Brazil’s cattle exports were associated with between 65,000 and 75,000 hectares of deforestation per year; 51 percent of this deforestation risk was linked to sourcing of cattle from the Amazon biome, and 47 percent from the neighboring Cerrado savanna biome, according to the report. 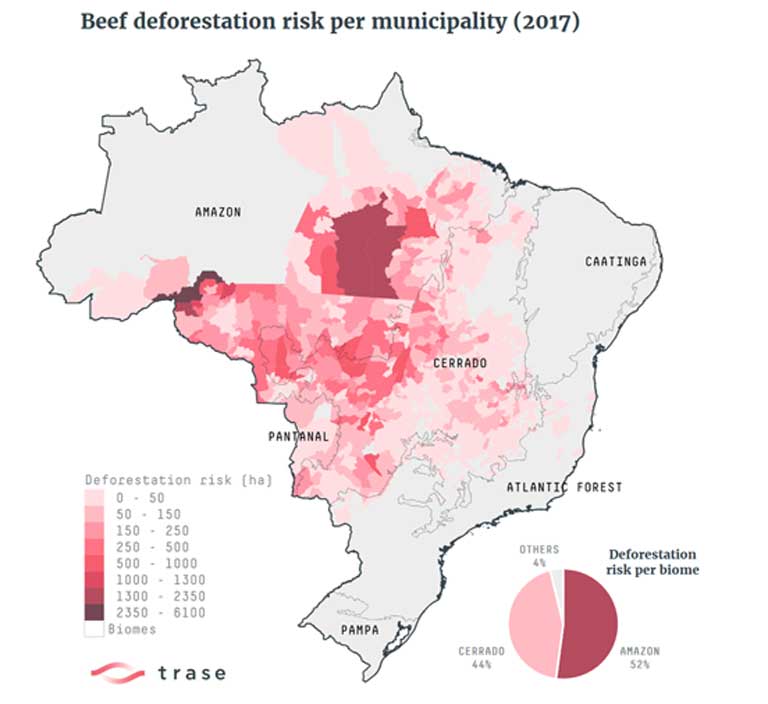 Tree loss rose dramatically between 2017 and 2018, with Brazil losing roughly 3,000 square miles in the Amazon. Data from Brazil’s space agency, INPE, shows how deforestation in the legal Amazon has spiked further this year after Jair Bolsonaro took office in January.

The Brazilian data, say experts, coming in the midst of major deforestation-linked fires raging across the Amazon rainforest, is unsettling.

Toby Gardner, Trase’s Director, told Mongabay that “deforestation associated with fresh meat imports from Brazil to the US spiked massively between June 2016 and July 2017 when the ban on fresh meat imports was lifted temporarily.”* This, he says, clearly links Brazil’s beef industry with forest loss. In 2016, livestock farming accounted for more than seven percent of Brazil’s Gross Domestic Product, according to Chain Reaction Research. The same source reports that as of 2018, Brazil had the world’s second largest cattle herd.

Traditionally, Gardner says, concerns about food safety have blocked fresh Brazilian meat from entering the United States. But during that brief window when it was permitted, Gardner told Mongabay the US-Brazil beef trade doubled. “Slaughter businesses from all over Brazil filled this new demand – including meatpackers in the Amazon, notably the state of Mato Grosso,” he said. During that time, Trase data indicates that the deforestation risk associated with beef imports to the US from Brazil more than trebled. 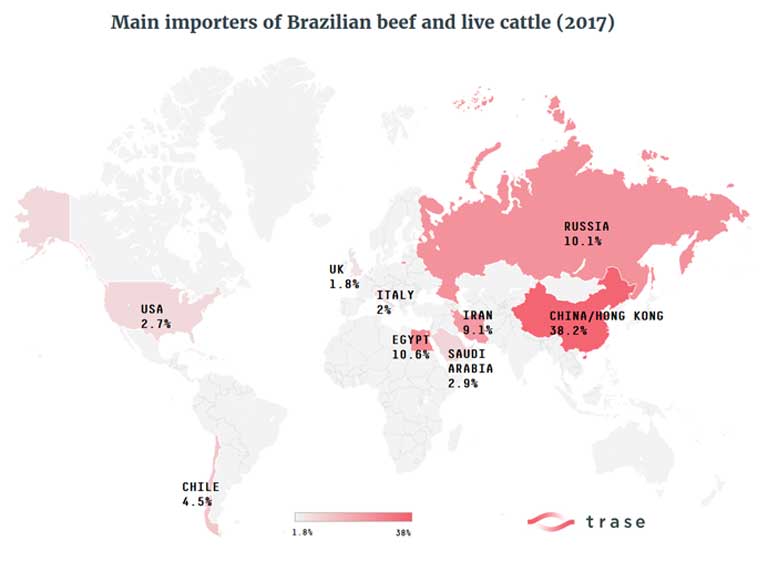 What shut down fresh beef imports to the US in 2017 was a meat-quality scandal. Brazilian Federal Police made arrests related to a bribery scheme in which 30 meat refrigeration facilities offered payoffs for illegally altered quality control certificates. Some of Brazil’s largest food and meat producers, including JBS and BRF, were charged.

Trase data shows that JBS — a company frequently charged with deforestation in the past related to livestock production — presents the highest deforestation risk of Brazil’s leading beef companies. It is followed by other major firms including Minerva and Marfrig.

JBS responded to questions from Mongabay about its supply chain monitoring, saying that it “assesses more than 50,000 potential cattle suppliers every day.” The firm noted that it has blocked more than 7,000 potential suppliers because of noncompliance issues and that a third party, DNV GL, a Norwegian auditing firm, monitors JBS’s system. 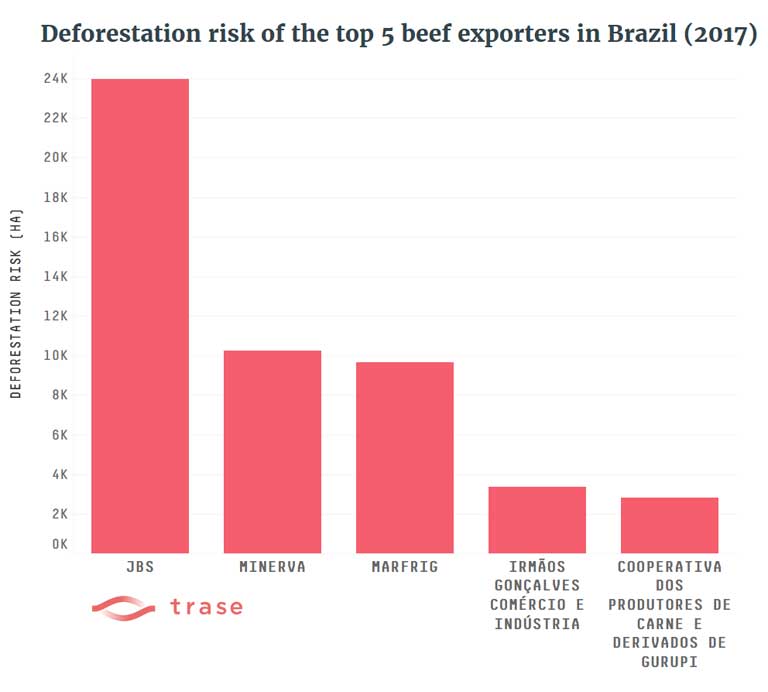 Holly Gibbs, a supply-chain researcher at the University of Wisconsin-Madison, USA, told Mongabay that “The Amazon is [roughly] six times the size of Texas, and we know that 60-80 percent of the land that’s cleared is used for cattle ranching. So that’s a really large area.” Gibbs spotlighted a critical, well-documented, loophole in the current monitoring system for detecting cattle-related deforestation: only direct slaughterhouse suppliers are monitored. An animal’s ranch of origin — typically where illegal deforestation takes place — is rarely monitored for forest loss.

“We know from our analysis of the cattle transport data that cattle supply chains are really fluid,” Gibbs told Mongabay. “We know that 80 percent of the direct suppliers that sell to slaughterhouses bought from other ranchers before they sold. In fact, on average, they bought from 15 other properties before they sold.” Gibbs estimates that up to 80 percent of cattle-related deforestation is missed by Brazil’s current monitoring system.

She likens the chronic problem, unaddressed by government policy, to “turning on your air conditioning to cool your house during a heatwave and then leaving all your doors and windows open.” The problem could be solved by barcode tagging animals from birth, so livestock could be traced from source, through multiple sales, to the slaughterhouse. Yet analysts say political will is lacking.

Both Gardner and Gibbs point to another problem: current cattle industry deforestation agreements only cover the Amazon and not Brazil’s Cerrado savanna region, which has become a deforestation hotspot over recent decades.

Researchers like Gibbs and Trase have used government-mandated animal transport certificates to track the livestock supply chain. Trase uses municipal-level deforestation data to identify deforestation risk associated with livestock shipments. However, the Bolsonaro administration, since taking power in January, has blocked access to these certificates. Asked about this, the Ministry of Agriculture, Animal Husbandry and Supply, told Mongabay that the data was never publicly available and that the tracking system was changed to protect producers’ privacy, along with market data. 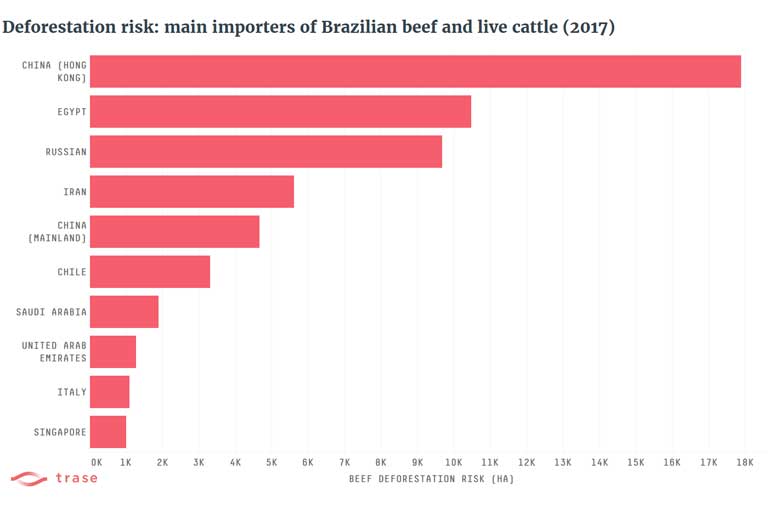 Now, in 2019, Gardner says, “we can expect another peak in associated deforestation.” A recent study has in fact linked deforestation under Bolsonaro directly to this year’s Amazon fires. Apparently, in the first seven months of this year valuable trees were logged, with the remaining “slash” allowed to dry slowly on the ground. Burning this material is a traditional method used in the region to prepare land for planting. The burning generates ash which serves as fertilizer. For ranchers, it fosters the growth of grass which beef cattle can graze.

In March, Brazilian President Bolsonaro and US President Donald Trump negotiated an agreement to increase beef exports from Brazil to the US, where companies like JBS have many subsidiaries. In June, meat inspectors from the US toured 12 slaughterhouses in Brazil. Observers expect permission for new imports to come through.

Trase’s new report says that the deforestation risk associated with fresh meat imports to the US has increased dramatically in recent years. The Global Environmental Change study notes that most beef raised in Brazil is currently consumed domestically.

To date, Brazil hasn’t implemented strategies to monitor cattle over their lifespan as related to deforestation. Experts say this lapse reflects the power of wealthy rural landowners.

Correction: Mongabay originally reported that Brazilian deforestation associated with fresh meat imports from Brazil to the US spiked massively under the Trump administration. That spike actually occurred during the previous administration.