A surge in Brazilian Amazon deforestation rates, along with deforestation alerts, during the first half of 2019 has prompted some ministers to challenge the accuracy of a monitoring system used for decades by the government, without controversy, to track forest loss.

Experts contacted for this story told Mongabay that the accusations are baseless, and defended the country’s cutting-edge satellite-imaging technology used to track deforestation, whose results are endorsed by independent monitoring systems both nationally and internationally.

The Brazilian National Institute of Space Research (INPE) issued an alert in July, enumerating deforestation and degradation totaling some 2,072 square kilometers (800 square miles) in June for Legal Amazonia, as detected by DETER, the institute’s real-time detection system. Deforested areas accounted for 44 percent of the total, or about 911 square kilometers (352 square miles).

When it released the figures, INPE noted that monthly DETER alerts are not meant to be used as exacting measures of deforestation rates compared year-to-year, but rather the statistics aim to support surveillance and enforcement, as they provide information about areas undergoing deforestation that need to be prioritized for protection in real time. These statistics “should not be understood as a monthly deforestation rate,” INPE said in a news release, adding that official deforestation area data is compiled by PRODES, whose monitoring system has made year-to-year deforestation comparisons since 1988.

In late June, INPE said the annual deforestation consolidated rate detected by PRODES for 2018, measured from August 2017 to July 2018, totaled 7,536 square kilometers (2,910 square miles) in Legal Amazonia, a federal designation that includes all or parts of nine Brazilian states. That’s an increase of 8.5 percent compared to 2017, measured from August 2016 to July 2017, when an area of 6,947 square kilometers (2,682 square miles) was cleared. 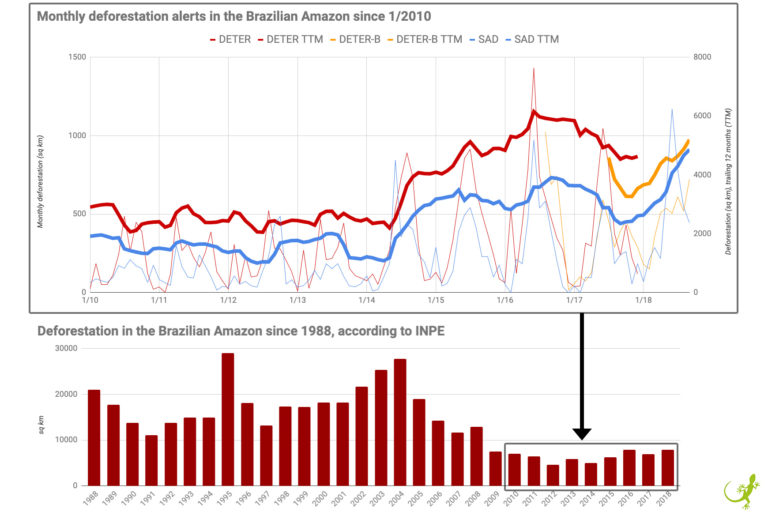 The DETER alert figures appear to have sparked criticism from two ministers in the administration of President Jair Bolsonaro, who said Amazon deforestation rates are overestimated and who then raised suspicions of data manipulation by their own government agency.

“These deforestation rates are manipulated. If you add up all the percentages already announced to date regarding deforestation in the Amazon, the Amazon would be already a desert. However, we have much more than half of the Amazon untouched,” Augusto Heleno, chief minister of the presidency’s Institutional Security Cabinet, said in an interview with the BBC. Heleno provided no evidence to back up this assessment.

In a statement, the Institutional Security Cabinet clarified that the minister did not refer to data from INPE at any point during the interview, and that his use of the phrase “manipulation of deforestation rates” was linked rather to a reporter’s question regarding an increase in international concern over the Bolsonaro administration’s proposals to exploit the Brazilian Amazon economically, which could push deforestation rates higher.

When asked if his criticism of deforestation rates referred to INPE’s findings, the minister said that “this data on deforestation deserves some examination,” but then added that the question should be addressed to the Ministry of the Environment instead, according to the statement.

Agriculture Minister Tereza Cristina also recently called the deforestation data into question. “What we need in Brazil is to have correct and unique data. When we have conflicting data we give ammunition to our [agribusiness] competitors,” she said in an interview with CBN Radio. “We have to have this information very safe in our hands.” According to Cristina, “there are many distortions of information” regarding deforestation in Brazil, with uncertainties in the data caused by clouds that obscure visibility over some areas of the Amazon during the rainy season.

The Agriculture Ministry did not respond to requests for comment.

The minister is correct to a degree with respect to satellite deforestation statistical unreliability, but INPE is already aware of and accounts for such uncertainties. Month-to-month deforestation rates are highly variable because monitoring systems cannot penetrate cloud cover, which makes estimate comparison with the same month a year earlier unreliable, especially during the rainy season between November and April.

That’s why experts rely on a yearly comparison, August to July, to determine reliable deforestation rates. However, short-term monthly alerts can provide some useful insights on trends, primarily to indicate areas that should receive priority enforcement.

“There isn’t any evidence of data manipulation by INPE,” said Carlos Souza, a research associate at Imazon, a Brazilian research institute. Imazon is an NGO that, like INPE, tracks monthly and annual Brazilian Amazon deforestation rates. “Deforestation has been increasing since 2012, but in the first half of Bolsonaro’s government this trend is showing acceleration in both INPE and Imazon data … As scientists, we hypothesize that the weakening in environmental public policies, enforcement and control ends up increasing deforestation.”

Since Bolsonaro took office at the start of the year, he has pushed forward controversial policies, including plans to open up indigenous reserves for large-scale mining and agribusiness, as well as ongoing steps to weaken environmental regulations and agencies. However, most of these policies have yet to be implemented on the ground, so wouldn’t likely have had an impact on deforestation to date. But some critics say that Bolsonaro’s election emboldened illegal loggers and land grabbers to invade indigenous lands and clear trees in the Amazon, for which there is some hard evidence.

“All these signs tend to increase the risk of deforesting an area,” Souza said, adding that he believes the reality in the rainforest may be worse than what’s seen from space. “There is a gap between what is happening and what the satellite captures. Those on the ground can see things [unfolding] that have not happened [fully] yet, but which will result in deforestation. The satellite only detects damage when it is already done.”

New monitoring systems in the works?

In March, the Folha de S.Paulo newspaper reported that Environment Minister Ricardo Salles was preparing an alternative system to that employed by INPE to monitor deforestation in Brazil, at a cost of at least $8.5 million, using satellite imagery to be provided by Planet, a U.S.-based private company. INPE currently pays some $150,000 annually for NASA Landsat satellite imagery that it uses to assess PRODES annual deforestation rates, while DETER alerts use images from CBERS, Sino-Brazilian satellites, which are free, the report said.

The Environment Ministry did not reply to requests for comment.

“We’ve seen a lot of countries’ monitoring systems. Brazil really has the best forest monitoring system in the tropics,” said Mikaela Weisse, manager of the forest mapping platform Global Forest Watch (GFW). “INPE is really at the forefront of methodology and technologies able to detect deforestation and do it so consistently.

“I have a lot of confidence in the PRODES system,” she added. “[W]e saw from the PRODES data [that] deforestation in the Amazon [is] at the highest level in 10 years … There are 3, 4 or 5 different systems [now at work] … The fact that all of them are telling a similar [deforestation] story gives me much more confidence that it is actually happening. Not all of these institutions are biased.”

Two Brazilian NGOs, Imazon and the Socio-environmental Institute (ISA), also track spatial deforestation in Brazil on a monthly basis, and their findings align with those of INPE. However, while INPE covers all Brazil’s territory, Imazon only covers the Legal Amazon region and ISA for now only focuses on the Xingu River Basin. Imazon and ISA also produce monthly deforestation alerts, as does GFW. All of this data align fairly well with INPE reporting.

In June, the open-access platform MapBiomas — a network of NGOs, universities and technology companies in collaboration with Google — launched MapBiomas Alerta, a system that validates and refines deforestation alerts on native vegetation in all Brazilian biomes with high-resolution images. Experts consider this a cutting-edge system for tracking spatial deforestation and for providing alerts, as it compiles information from several institutions, including INPE, ISA, Imazon and GFW.

At its launch, MapBiomas announced 89,741 hectares (221,755 acres) of deforestation in Brazil in the first quarter of 2019, of which 95 percent didn’t have registered authorization in the federal and state licensing systems.

“Data and alerts from MapBiomas provide imagery [that is] 100 times better and that allows [us] to refine these alerts to the point of creating an indisputable record that there has been a reduction in forest coverage,” Souza said.

“MapBiomas Alerts allow the government to fight illegal logging at almost zero cost — [the Bolsonaro administration] just needs to take action” to implement it after crosschecking it with government records, he said, adding that the information required for implementation has already been sent to the government.

But satellite mapping alone won’t solve Brazil’s deforestation problems. “Impunity is the largest vector of deforestation; fines are never paid,” Souza said — especially since enforcement agencies have been largely defunded Bolsonaro and his predecessor, Michel Temer. We need “to reverse the [current deregulation] scenario and create a system of immediate punishment similar to [giving out driving violation] tickets.”

Correction (July 16,2019): the article was updated to attribute Mikaela Weisse from Global Forest Watch as the source of a quote about Brazil’s monitoring systems. The original article incorrectly stated the speaker was Katie Fletcher.

Banner image of deforestation in the Brazilian Amazon, courtesy of NASA. Brazil’s deforestation tracking system is considered the best in the tropics, and has been operational for decades.