Illegal gold mining is on the verge of wiping out an iconic wetland forest in the heart of Madagascar’s flagship national park, according to a new paper. Forest loss due to mining is a recent and growing trend in Ranomafana National Park, and the finding highlights fears that much of Madagascar’s remaining wilderness could succumb to the twin threats of deep poverty and organized crime.

“In Ranomafana, it seems like the central pandanus wetland that we had is gone,” Mar Cabeza, the lead author of the paper in the journal Animal Conservation, told Mongabay. “We know that habitat is being destroyed at a large scale. What we don’t know is how permanent it is,” she said.

While virtually all the wildlife habitat in Madagascar boasts unusually high levels of endemism and biodiversity, Cabeza said ecological damage to wetlands hits especially hard. “All the lowlands have been used for rice production, so there’s very little of the original habitat that used to be wetlands,” she said.

Over the last two years, small crews of miners using rudimentary hand tools have made repeated incursions into Ranomafana, located in southeastern Madagascar, to dig hundreds of shallow pit mines in the Soarano wetland. They cleared what was once a continuous canopy of spindly endemic screw pines (genus Pandanus) in the process. The wave of mining coincides with a steadily worsening security situation in the area, as reported by Mongabay in 2017, complicating attempts at enforcement and limiting researchers’ ability to quantify the problem. 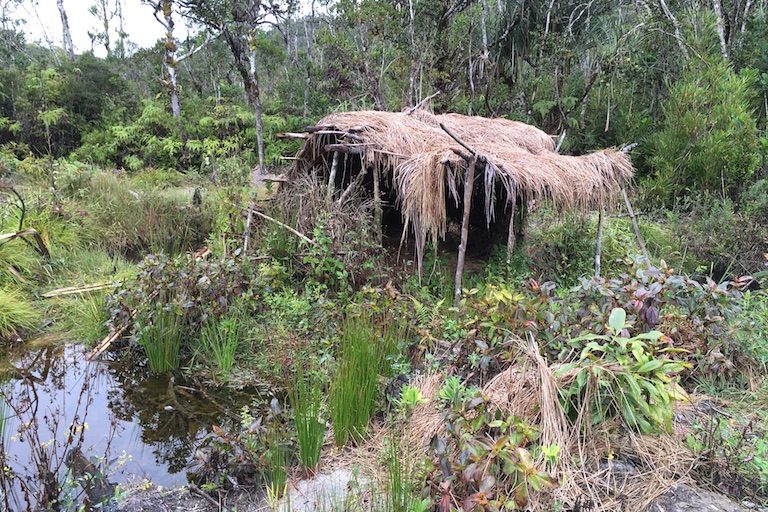 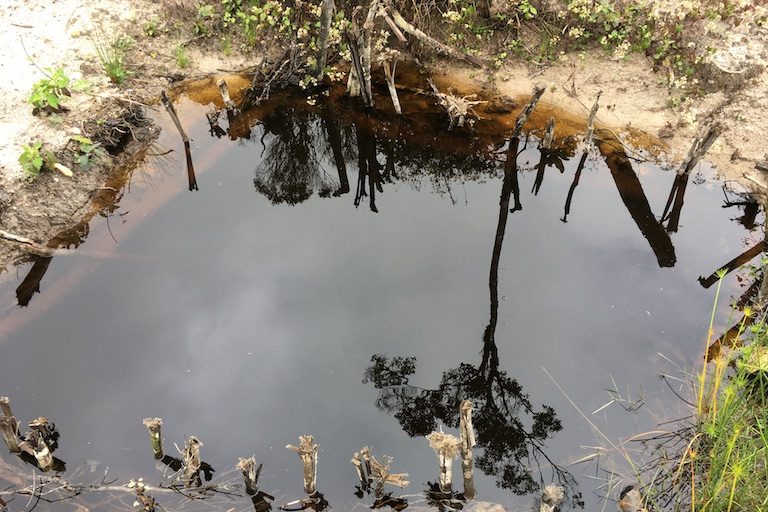 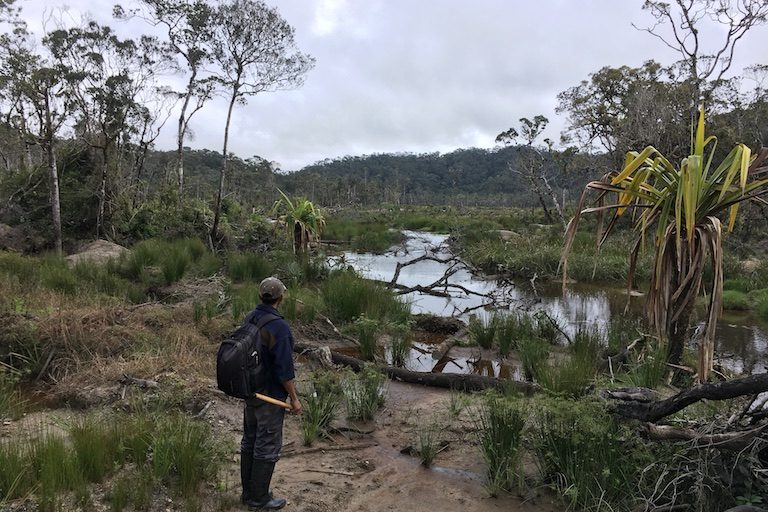 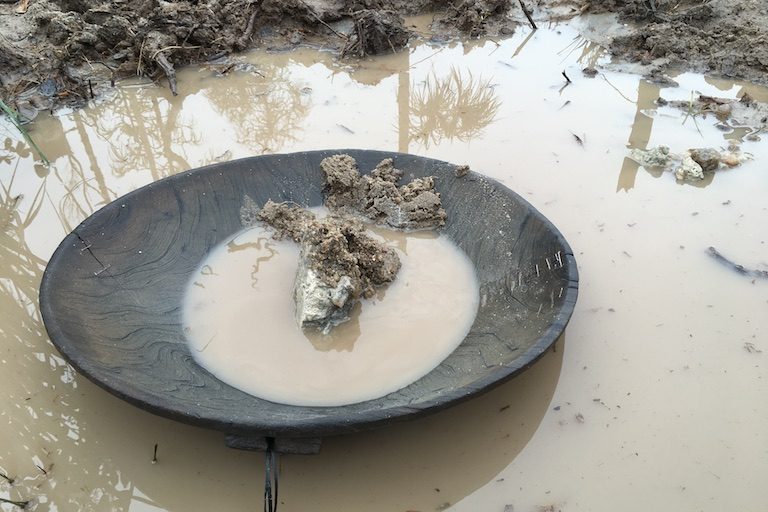 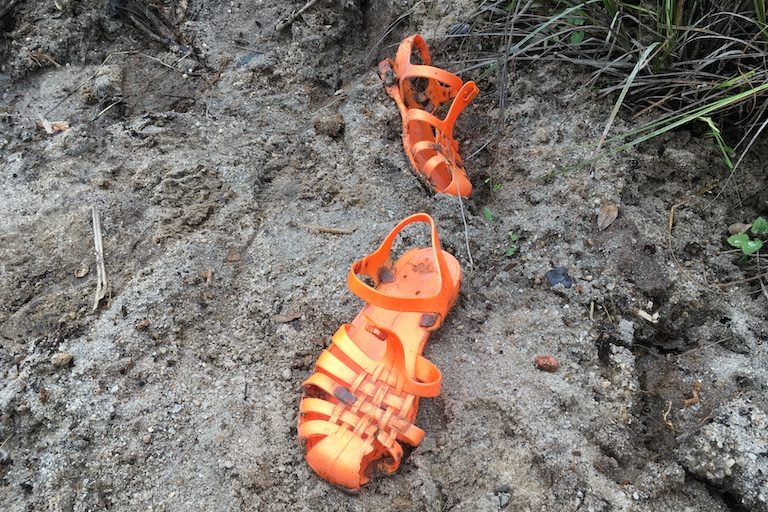 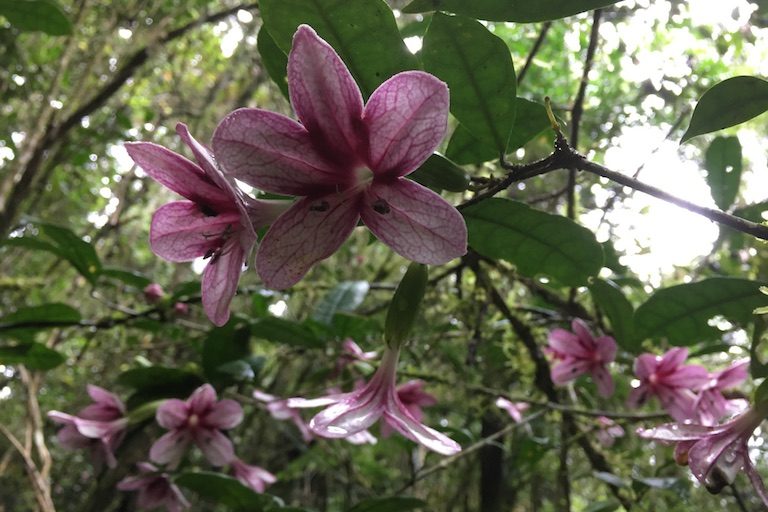 Photos of mining activity in the Soarano wetland in 2017.

In 2017, the mayor of Ambalakindresy, a town just west of Ranomafana, was murdered in what locals believe was retaliation for his cooperation in enforcing environmental laws. A year later, a local police captain investigating gold mining and cattle theft in the area was also shot and killed. Meanwhile locals have had to contend with frequent robberies and carjackings by groups of armed dahalos,the Malagasy term for gangs involved in livestock theft.

The links between gold mining in the park and the broader threat to the rule of law are unclear, said Cabeza, a biologist at the University of Helsinki who has spent more than a decade researching the practice of conservation in southeastern Madagascar. “But if you ask the villagers they keep saying it’s the bandits,” she added.

The paper’s authors used satellite imagery to analyze changes in forest cover and, unable to explore the most affected areas freely on foot, relied on drone photography to survey the wetlands there. They also gathered anecdotal reports suggesting that some locals have abandoned rice cultivation in favor of higher-paying work panning for gold. Cabeza said the difficulty of doing research itself eliminates one potential check on mining inside the national park. “The more we retreat, the more dangerous it becomes,” she said.

The fear is that the problem could easily become much worse. The narrow valleys being mined in Ranomafana are “very important areas from a conservation perspective, but in the scale of the operations, they’re still very small,” said David Edwards, a scholar of artisanal mining at the University of Sheffield in the U.K., who was not involved in the study.

“Why is it that they’re currently working at 50 hectares here and 10 hectares there? Is it that we think that gold is, relatively speaking, a rare commodity in Madagascar?” he asked. “Or it is that this is the tip of a massive iceberg that could lead to a huge gold rush?”

More broadly, mining is poised for a dramatic expansion across Africa. In a 2013 paper, Edwards and his co-authors observed that the continent is home to some 30 percent of the world’s mineral resources but only 5 percent of mining activity over time, while nearly half of Africa’s metal mines are within 10 kilometers (6 miles) of a protected area. Large mineral finds have often been accompanied by high-level corruption and efforts to shrink protected areas, Edwards said. In Madagascar, at least two mineral sands projects have infringed on proposed or existing protected areas, while a number of endemic species are already found only within mining concessions.

“The basic issue is once you’re dealing with major mines, you’ve got huge revenue coming in,” Edwards said. This tilts the scales away from conservation interests. Even artisanal mining can have drastic consequences if the mineral deposits are valuable enough. In 2016, a sapphire find in the Ankeniheny Zahamena Corridor, north of Ranomafana, attracted tens of thousands of small-scale miners, turning one corner of the protected area into a muddy wasteland in a matter of weeks.

Edwards conducted his Ph.D. research in southeastern Peru, where illegal gold mining decimated tens of thousands of hectares of flooded forests. “In those areas, it’s been really difficult to reverse,” he said. “There’s no shortage of people without other economic opportunities in their lives.”

Conservationists in Madagascar worry that it’s only a matter of time before gold miners there follow the South American example and begin to use mercury to aid their efforts, multiplying the human and environmental cost as the toxic metal contaminates the groundwater and moves up the food chain.

Mamy Rakotoarijaona, a former director of Ranomafana National Park who co-authored the paper on gold mining there, now directs operations across 43 protected areas administered by Madagascar National Parks (MNP). He says the organization has been in talks with officials at the Ministry of Mines and Strategic Resources about introducing controls to prevent imports and distribution of mercury.

MNP staff conduct occasional joint patrols inside Ranomafana with police and military escorts, but Rakotoarijaona said, “we need a permanent budget for reinforcing the control and patrol of the site.” As it stands, mining has essentially turned large swaths of the national park into no-go zones, even for the authorities. Across the country, park managers are largely left to stand in for an absent state when it comes to both security and community outreach.

But Edwards said attempts to prohibit small-scale mining could be counterproductive: “Mining is almost certainly going to happen.” The best conservationists can hope for, he said, is to persuade miners to use less destructive methods, and steer clear of the most important sites for biodiversity.

Cabeza agreed. “There would be a lot of options for small-scale mining initiatives” that would be legal outside the national park, she said, “but [people] don’t know how to go about it.”

Banner image: A view of the Soarano wetland, cleared of forest by illegal gold miners. Image by Daniel Burgas.

Rowan Moore Gerety is the author of Go Tell the Crocodiles: Chasing Prosperity in Mozambique.