Large-scale deforestation in the tropics could drive significant and widespread shifts in rainfall distribution and temperatures, potentially affecting agriculture both locally and far from where forest loss is occurring, concludes a study published today in Nature Climate Change.

The research, authored by Deborah Lawrence and Karen Vandecar of the University of Virginia, is based on a review of several studies that measured and modeled the impacts of tropical forest clearance in different geographies and at various scales. It finds that overall rainfall does not diminish with deforestation, but precipitation patterns shift. Areas that now benefit from rainfall may be deprived should deforestation reach certain thresholds. Other zones would become wetter.

Under extreme deforestation scenarios, disappearance of the Amazon rainforest would reduce rainfall in the American Midwest, Northwest and South at key growing times, while increasing winter precipitation along the eastern seaboard. Complete deforestation in Central Africa would also hit the American heartland as well as the Gulf of Mexico, the U.S. Northwest, Ukraine, and Southern Europe, but boost rainfall in China, western Asia, and the Arabian Peninsula. Complete loss of forests in Southeast Asia would affect rainfall in China and India.

“Tropical deforestation delivers a double whammy to the climate—and to farmers,” said Lawrence, the study’s lead author, in a statement. “Most people know that climate change is a dangerous global problem, and that it’s caused by pumping carbon into the atmosphere. But it turns out that removing forests alters moisture and air flow, leading to changes—from fluctuating rainfall patterns to rises in temperatures—that are just as hazardous, and happen right away. The impacts go beyond the tropics—the United Kingdom and Hawaii could see an increase in rainfall while the US Midwest and Southern France could see a decline.”

The local effects are also substantial. Clearing 40 percent of the Amazon rainforest could trigger seasonal shifts in the shifting the intertropical convergence zone (ITCZ) — a band that circles the planet and drives current rainfall patterns — toward the poles, increasing drying by as much as a fifth across the Amazon Basin during the dry season. Soy yields and cattle productivity in the Amazon could drop precipitously as a result. Less rainfall during the driest times of the year would exacerbate die-offs, heightening the risk of fire and releasing more carbon into the atmosphere. The effects are projected to extend down into the Rio de la Plata Basin, the agricultural breadbasket of South America.

The paper notes that studies show some of the effects of forest loss are already being felt.

“The seasonality of rainfall has shifted due to deforestation in Brazil. Meteorological stations in Rondônia, Brazil indicate that the wet season has been delayed by ~11 days in deforested regions while it has not changed in forested areas over the last 30 years,” the authors write.

However, Lawrence and Vandecar acknowledge there remains considerable uncertainty about impacts so far as well as future forecasts, especially in Africa and Asia.

“Rainfall has declined in Borneo since the 1950s, and the decline has been stronger since the 1980s when deforestation intensified,” they write. “However, while the island lost 50% of its forest cover, over the same period a slowdown in the Walker circulation reduced rainfall across the region. Thus, while deforestation may have contributed to the decline, further work is needed to demonstrate the effect.”

“Even fewer studies document changes in precipitation over Africa.”

Tipping points for forest loss are even fuzzier, particularly in Southeast Asia where forest cover is dispersed across islands rather than in large blocks like the Amazon and Congo basins. Some places may be even more sensitive due to the role forests may play in carrying atmospheric moisture from the ocean to interior areas. Loss of coastal forests can break that chain, drying inland areas.

Despite the uncertainties of models, the authors say that farmers have plenty to worry about if deforestation continues unabated. Beyond shifts in rainfall, tropical deforestation causes an increase in average temperature, which should be particularly concerning for the agricultural sector and policymakers.

“Tropical forests are often talked about as the ‘lungs of the earth,’ but they’re more like the sweat glands,” said Lawrence. “They give off a lot of moisture, which helps keep the planet cool. That crucial function is lost – and even reversed – when forests are destroyed.”

Lawrence went on to say that potential climatic shifts from deforestation are “a very big deal” for humanity.

“In the last few centuries, the average global temperature has never varied by more than about one degree. Once we go above one degree—to 1.5 degrees or more—we’re talking about conditions that are very different from anything humanity has ever experienced,” she said. “While farmers may ultimately adapt to shifts in the season, it’s difficult—if not impossible—for farmers to adapt to increased floods or parched soils.” 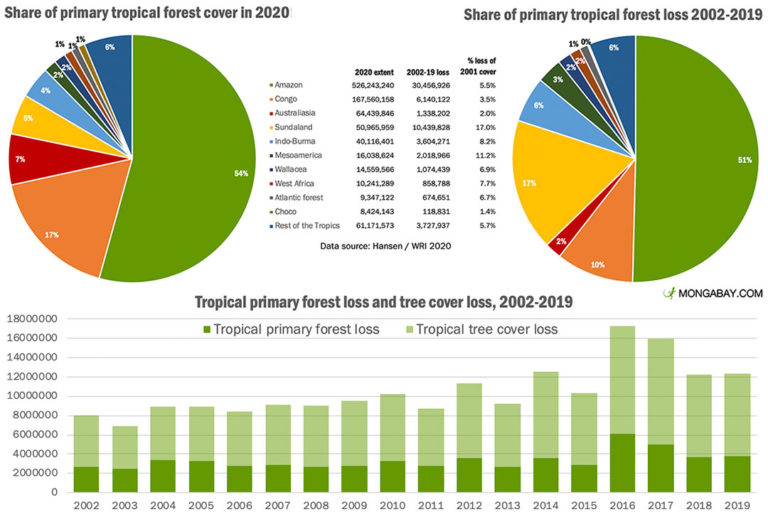 Deforestation rates remain high across the tropics. According to data published last year by researchers led by Matt Hansen of the University of Maryland, more than 100 million hectares of tropical forest was lost between 2001 and 2012. Four countries — Brazil, Indonesia, Democratic Republic of the Congo, and Malaysia — accounted for about three-fifths of that loss.

Note: the deforestation charts on this page were updated on July 22, 2020.