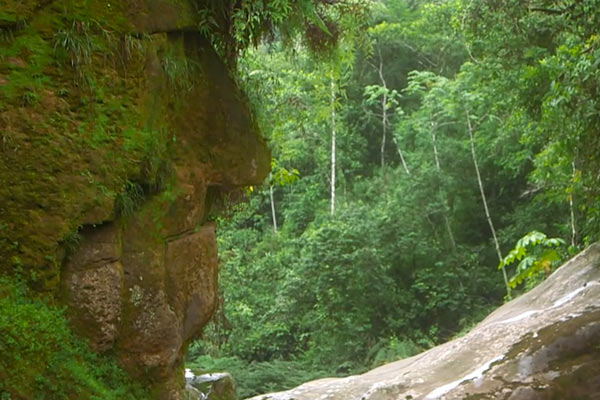 A still from the film, The Reunion, showing the Rostro Harakbut.

A new short film documents the journey of an Amazonian tribe hiking deep into their territory to encounter a mysterious stone countenance that was allegedly carved by ancient peoples. According to Handcrafted Films, which produced the documentary entitled The Reunion, this was the first time the Rostro Harakbut (i.e. the countenance of the Harakbut people) has been filmed. Today, the monument—and the indigenous people in the Peruvian region—are imperiled by an influx of illegal loggers, miners, and colonists.

“It was three days of rough hiking to get there, but then it was glorious,” Rainforest Foundation U.S. Program Manager, Tom Bewick, who was along during the expedition, told mongabay.com “The Rostro is extraordinary, and it really has the feeling of a guardian of the forest. Luis and Jaime, the main protagonists in the film, were genuinely awestruck.”

Rising above a waterfall—and looking somewhat like the brooding stone faces of Easter Island or something out of the Lord of the Rings—this giant monument has long been known to the Harakbut people who live in the Amarakaeri Reserve. But they have kept it a secret until now. The the giant face has never been studied by archeologists, but the Harakbut believe the face is not the product of natural forces, but carved by their ancient ancestors.

The Reunion from Handcrafted Films on Vimeo.

Bewick says there are a number of clues pointing to manmade origin, rather than natural forces.

“The Rostro is perched perfectly overlooking a river valley, and presides over a waterfall and a basin that resembles an amphitheater,” he explained, adding that “there are markings all over the Rostro that indicate that it was hacked out with rudimentary tools.”

There are also no similarly-shaped rocks in the region and the river’s current moves away from the face, making it unlikely that floods would have produced this very human-like countenance.

“The Harakbut don’t have a written history, but claim that the Rostro has been in their oral history for generations and generations…More study is needed for sure,” Bewick added.

Moreover, there appears to be a second face on the monument: resting on the chin are a pair of closed eyes with a large bulbous nose. 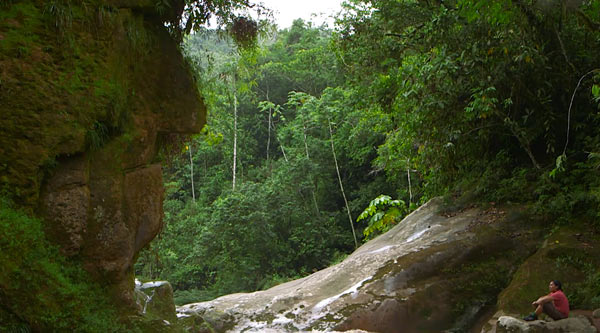 Another still from the film, The Reunion, showing the Rostro Harakbut.

The Harakbut people hope that by revealing the Rostro Harakbut to the world, they may be able to better protect their territory from the sudden intrusion of illegal colonists.

“The Amarakaeri Reserve, formally created in 2004, is the heart of the Harakbut ancestral territory in Madre de Dios, Peru. Up until 15 or so years ago, the region was virtually intact between Cusco and Puerto Maldonado, which one could only reach by plane or 25 hours jeep ride,” explained Bewick. “This all changed rapidly, when, over a period of about five years, a new highway was finished connecting Cusco to Bolivia and Brazil, the price of gold soared after the 2008 global economic crisis…Scores of migrants from the sierra enter the area daily in search of work in the mines and logging…The indigenous leadership has been struggling to save the Reserve and the surrounding buffer zone ever since.”

Exacerbating the situation, U.S. oil company, Hunt Oil, has been exploring the reserve for natural gas deposits. Bewick says that drilling “is set to take place in the center of the Reserve among the headwaters, which makes it a long-term threat.” Indigenous groups have been fighting the concession to Hunt Oil since 2006.

The Rainforest Foundation U.S. has been working with indigenous leaders for two years to build a monitoring system for the embattled reserve, which will include GPS smart phone, video, and drones. 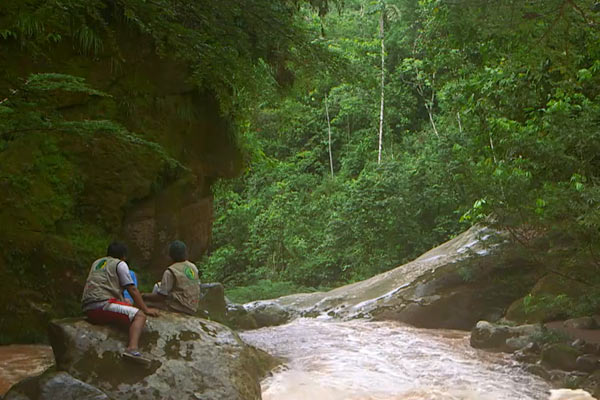 Another still from the film, The Reunion, showing the Rostro Harakbut.

A garden or a wilderness? One-fifth of the Amazon may have been savannah before the arrival of Europeans

(07/09/2014) The Amazon is the largest tropical forest on the planet, covering about 6.5 million square kilometers, although much has been lost in recent decades.Yet new research published in the Proceedings of the National Academy of Sciences (PNAS) finds that quite recently—just 500 years ago—a significant portion of the southern Amazon was not the tall-canopied forest it is today, but savannah.

(07/22/2013) New research indicates that Madagascar was occupied some 2,500 years earlier than previously established. The findings, published in Proceedings of the National Academy of Sciences, suggests a more complex view of the human role in the extinction of the island’s mega-fauna. A large body of research holds that village communities began to appear in Madagascar around 500 AD. These were established by people of Indonesian and East African heritage, according to past studies that found linguistic similarities between the Malagasy languages of southeastern Borneo as well as genetic markers tying modern-day Malagasy people to both Indonesia and East Africa. But there have been plenty of hints that people came to the world’s third largest island well before 500 AD.

(07/05/2012) A study last month in the journal Science argued that pre-Columbian peoples had little impact on the western and central Amazon, going against a recently composed picture of the early Amazon inhabited by large, sophisticated populations influencing both the forest and its biodiversity. The new study, based on hundreds of soil samples, theorizes that indigenous populations in much of the Amazon were tiny and always on the move, largely sticking to rivers and practicing marginal agriculture. However, the study raised eyebrows as soon as it was released, including those of notable researchers who openly criticized its methods and pointed out omissions in the paper, such as no mention of hundreds of geoglyphs, manmade earthen structures, found in the region.